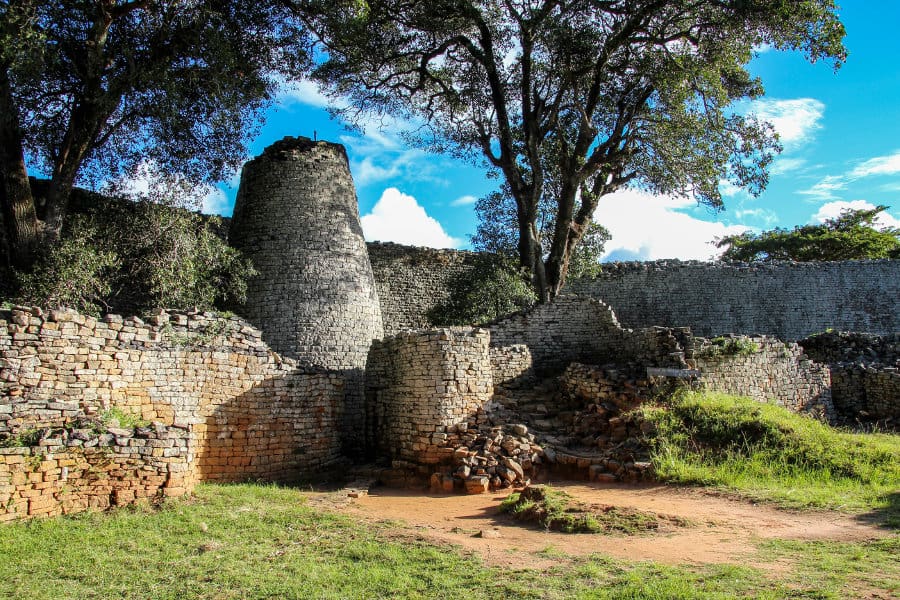 Great Zimbabwe is legendary. Ancient clusters of rock stand upon a dusty savannah, deep in the heart of Zimbabwe.

They still stand proud after more than 900 years, evoking the brilliance of early medieval Africa. You can sense a magical old-world atmosphere. You can almost imagine that this was the capital of the Queen of Sheba. But that, as you will soon find out, is a complete myth.

This is one of the finest historical monuments anywhere in the world, not just in Africa. Now it is eerily silent, except for the baboons that act as sentinels. It is quite remarkable how few people know about Great Zimbabwe, or how few people actually visit.

While famous old monuments like Machu Picchu or the Egyptian pyramids receive millions of annual visitors, here is a piece of legendary history that you can have all to yourself.

Where is Great Zimbabwe? 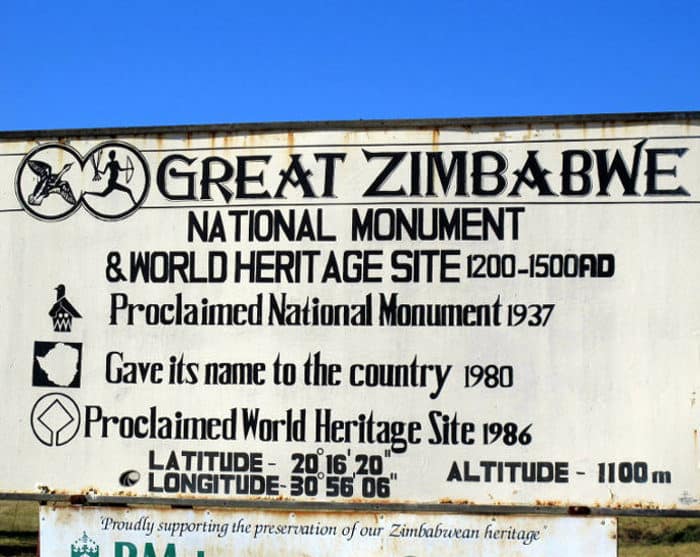 Great Zimbabwe can be comfortably incorporated into a Zimbabwe safari.

Why are these ruins so important?

The standard misconception of Africa is of a backwards continent. Many people who haven’t visited Africa imagine poverty, danger and squalor. Or witchcraft and strange tribal customs.

To most people around the world, Africa was, and still is, mud huts and a lack of development. Some would even say that if it wasn’t for the colonialists, there still wouldn’t be roads or modern inventions in Africa.

Great Zimbabwe is evidence to counter these dangerous myths and stereotypes. The vast ruins showcase an elaborate style of architecture and society, from a time when Europe was still in the dark ages.

They are testimony to a culture and Bantu civilization that flourished from the 11th to 15th centuries. And they are proof that Africa was thriving long before the Europeans arrived.

These ruins are so impressive that the colonialists never believed that Great Zimbabwe could have been built by indigenous Africans.

Great Zimbabwe: A Journey Into the Past 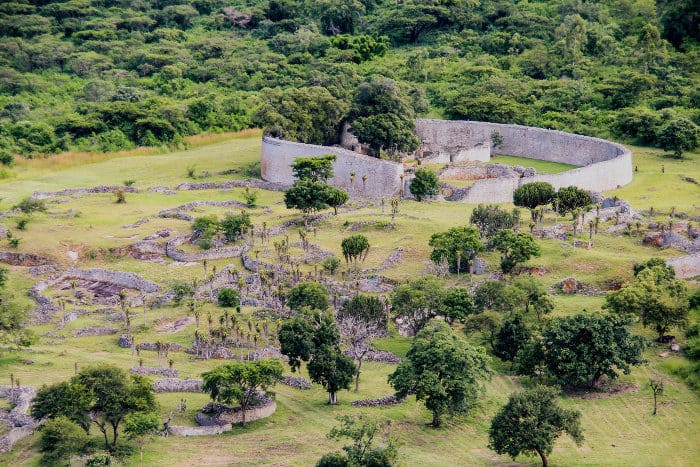 Zimbabwe is a Shona word that means “stone houses.” Although people were living on this site since the fourth century, there is only evidence of stone houses from the 11th century.

By the middle of the 13th century Great Zimbabwe was capital of the dominant state in Southern Africa. Their lands stretched eastwards to the Indian Ocean coastline and allowed for trade with Arabs and Chinese.

The Zimbabweans mined gold, copper, and iron, then traded it for riches that came from the east, as evidenced by porcelain and other fine goodies at Great Zimbabwe. Rich agricultural soils helped to keep a healthy local population and modern researchers paint the picture of a prosperous state, where animals and man lived in harmony.

At one point the population of the city exceeded 18,000 and the state controlled trading routes that crisscrossed through Southern and East Africa.

But as with most great old cities there came a decline. By 1450 the capital was overcrowded and abandoned, ceding power to the city of Khami. 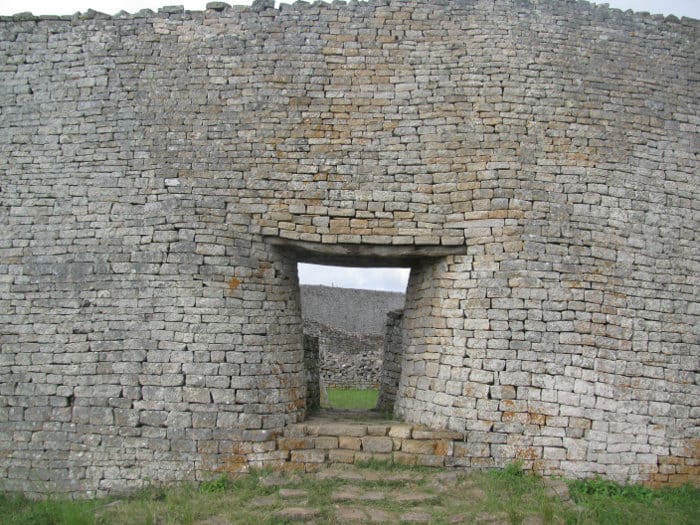 Visit Great Zimbabwe and the first things that impresses is its location. You must journey into the wilderness and pass rowdy baboon troops, before setting eye on the ruins.

Then you are inspired by the size. Large walls rise evocatively and narrow passages lead to a high conical tower.

Chequered wall decorations survive to this day, although most of the art and more valuable artefacts were looted long ago, mostly by colonialists.

The western enclosure is where chiefs lived and a good local guide can show you the eastern enclosure, where birds were ritually sacrificed.

The photos are not always that impressive. Great Zimbabwe isn’t on the same scale as the Pyramids or Machu Picchu, one reason why it doesn’t receive as many visitors.

But when exploring these ruins you must always remember an important fact: roughly 98% of Great Zimbabwe is yet to be excavated. All the granite passageways and elaborate stone is just 2% of the city, and it may be centuries before anyone uncovers the rest.

Such a thought gives rise to a truth that very few people outside Africa like to acknowledge: Great Zimbabwe was one of the most developed and cultured of all the world’s civilizations during the medieval period.

Not the Capital of the Queen of Sheba 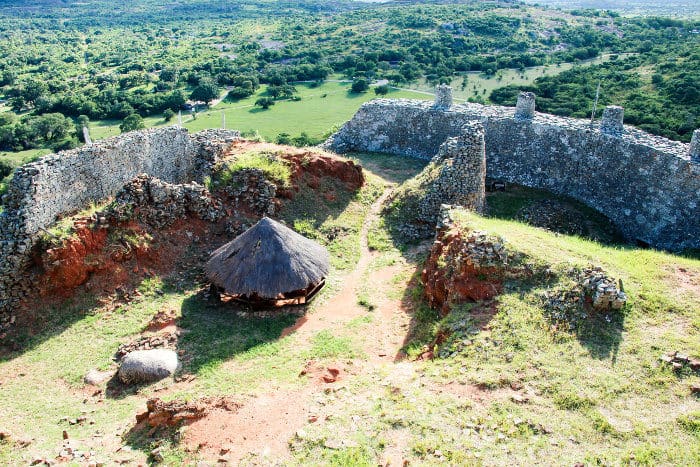 Of course, such an idea didn’t sit very well with the colonialists and their idea of a superior European civilization. They refused to believe that on a landscape of elephants and mud huts, the indigenous people could have constructed such an impressive city.

Sir Cecil Rhodes commissioned researchers and archaeologists to visit Great Zimbabwe and put forward theories as to who built the city.

The most baffling and popular theory is that Great Zimbabwe was where the Queen of Sheba lived during her visit to Solomon. Even to this day this myth persists. In the UNESCO World Heritage listing for Great Zimbabwe the opening lines read:

Quite how biblical characters ended up building cities so far south of the holy lands is anybody’s guess. And archaeological evidence suggests that the earliest inhabitants came 400 years after the time of Christ.

British archaeologist Richard Hall stated he wanted to “remove the filth of Kaffir occupation.” Then he wrote a book claiming that Great Zimbabwe was built by races more civilized than Africans.

When another archaeologist, Randall-Maciver, declared Great Zimbabwe was “unquestionably African,” archaeologists were banned from visiting the site for 25 years.

The beauty of any visit here is that you are virtually alone. When one Africa Freak contributor visited in 2015 he made the first international entry in the visitors book for 12 days.

Getting to Great Zimbabwe

If you are traveling by public transport then the easiest approach is to get a bus or shared taxi to Masvingo, then negotiate a private taxi from there.

The old city is easy to find if you have your own transport. Otherwise, you could visit the ruins as part of an overland Zimbabwe safari tour. 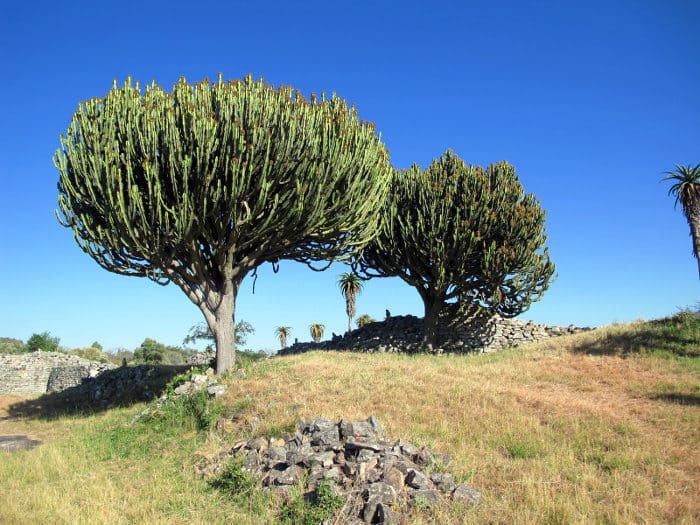 There is no accommodation in the World Heritage Site, but there are two passable hotels within 30 minutes walking distance. These are a little overpriced for what you get but are convenient for a single night.

It is also possible to camp inside the grounds, literally in the shadow of the ruins. Facilities are limited so again, it’s not a great option for a multi-night stay. But other than the baboons, it is very safe to camp here. There is 24-hour security and the Shona people are incredibly friendly. 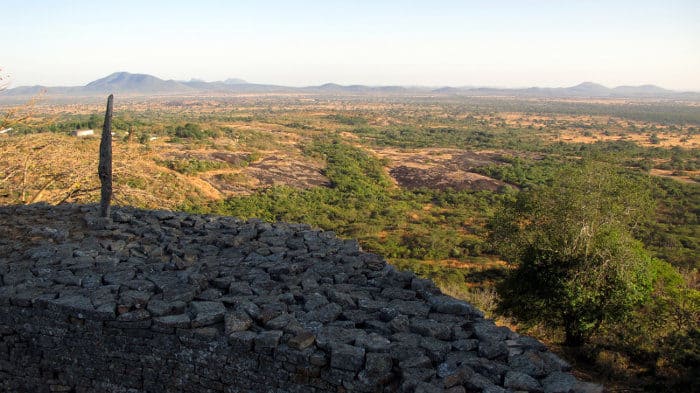 It’s best to visit early in the morning or late in the afternoon. Walking around in the midday heat is not advised.

Visit late in the afternoon and you get the bonus of sunset. Great Zimbabwe is located on a hilltop and you can enjoy spectacular views over the surrounding plains.

When entering the complex there should be a couple of local guides hanging around. They can lead you on a visit for a few dollars, but some negotiation is required.

The onsite museum is pretty poor and was closed the last time an Africa Freak contributor visited.

You need two hours to take in all the ruins. The Great Enclosure area is the most impressive, containing the highest and most artistic ruins. Then you can walk to the Hill Ruins and Valley Ruins, to gain an appreciation of how big this city once was. 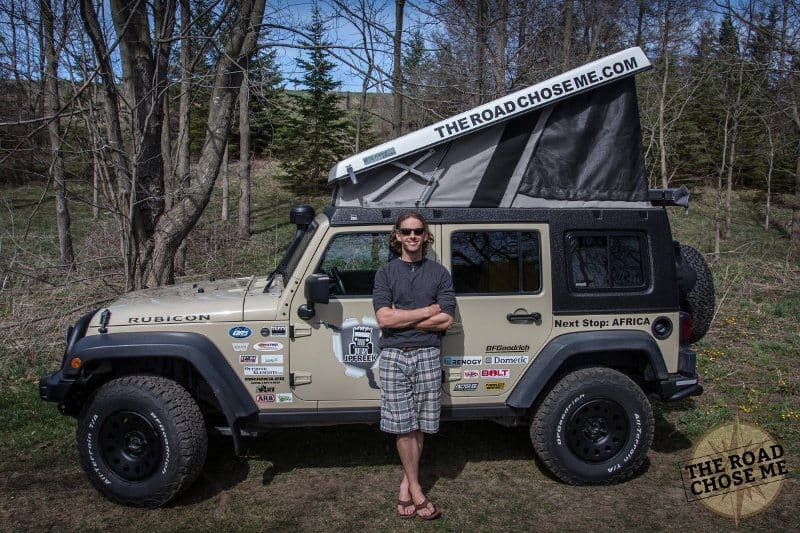 In Mogadishu, Somalia, life is a beautiful beach