Looking for a new and exciting adventure? These 64 famous quotes and safari sayings will literally make you fall in love with Africa! 😉

64 Safari Quotes to Inspire You About Africa

After spending so long in Africa I know that these quotes are not only inspirational, they are incredibly accurate. So take a read and feel inspired. 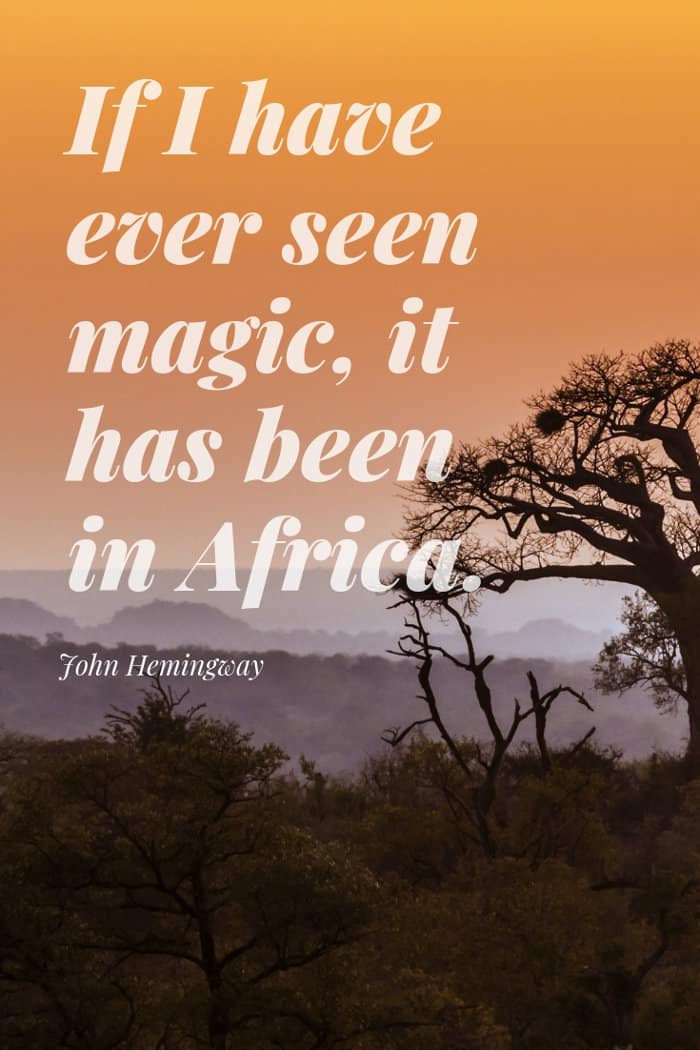 * Francesca Marciano (Italian novelist and filmmaker; extract from “Rules of the Wild”)

3. “Africa has her mysteries and even a wise man cannot understand them. But a wise man respects them.”

4. “Africa is not a country, but it is a continent like none other. It has that which is elegantly vast or awfully little.”

5. “Nothing but breathing the air of Africa, and actually walking through it, can communicate the indescribable sensations.”

6. “The only man I envy is the man who has not yet been to Africa – for he has so much to look forward to.”

8. “Africa – You can see a sunset and believe you have witnessed the Hand of God. You watch the slope lope of a lioness and forget to breathe. You marvel at the tripod of a giraffe bent to water. In Africa, there are iridescent blues on the wings of birds that you do not see anywhere else in nature. In Africa, in the midday heart, you can see blisters in the atmosphere. When you are in Africa, you feel primordial, rocked in the cradle of the world.”

9. “If there were one more thing I could do, it would be to go on safari once again.”

10. “There are as many Africas as there are books about Africa — and as many books about it as you could read in a leisurely lifetime. Whoever writes a new one can afford a certain complacency in the knowledge that his is a new picture agreeing with no one else’s, but likely to be haugthily disagreed with by all those who believed in some other Africa. … Being thus all things to all authors, it follows, I suppose, that Africa must be all things to all readers.” 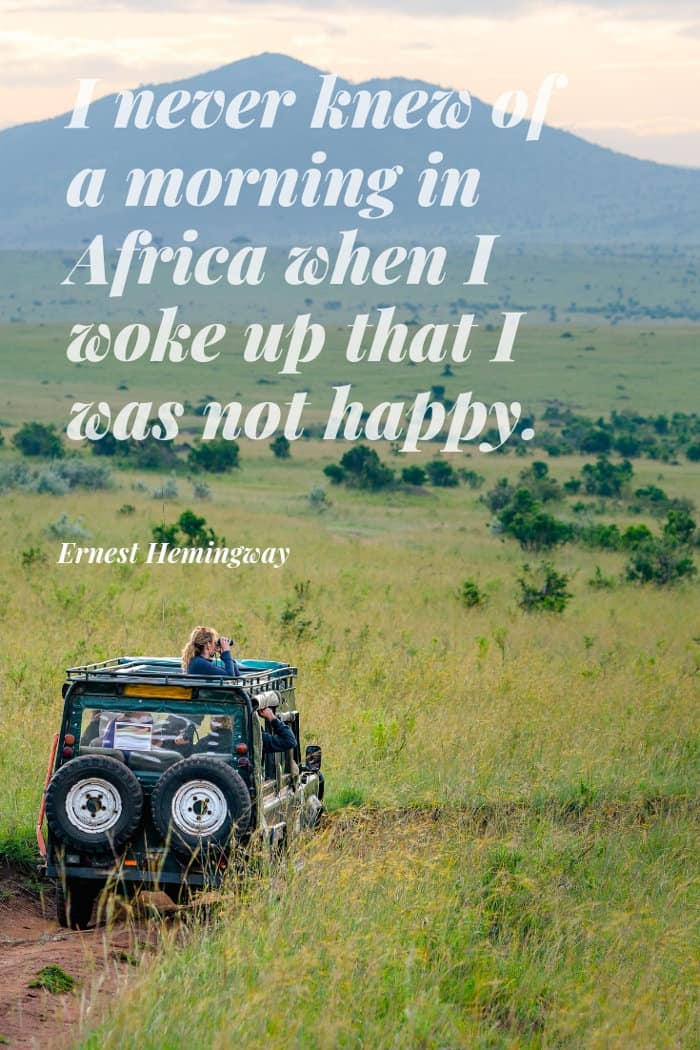 11. “I never knew of a morning in Africa when I woke up that I was not happy.”

12. “When you leave Africa, as the plane lifts, you feel that more than leaving a continent you’re leaving a state of mind. Whatever awaits you at the other end of your journey will be of a different order of existence.”

* Francesca Marciano (Italian novelist and filmmaker; extract from “Rules of the Wild”)

13. “Reminds me of my safari in Africa. Somebody forgot the corkscrew and for several days we had to live on nothing but food and water.”

14. “It’s really beautiful. It feels like God visits everywhere else but lives in Africa.”

* Will Smith (American actor and producer)

15. “Africa is mystic; it is wild; it is a sweltering inferno; it is a photographer’s paradise, a hunter’s Valhalla, an escapist’s Utopia. It is what you will, and it withstands all interpretations. It is the last vestige of a dead world or the cradle of a shiny new one. To a lot of people, as to myself, it is just home.”

16. “Africa changes you forever, like nowhere on earth. Once you have been there, you will never be the same. But how do you begin to describe its magic to someone who has never felt it? How can you explain the fascination of this vast, dusty continent, whose oldest roads are elephant paths? Could it be because Africa is the place of all our beginnings, the cradle of mankind, where our species first stood upright on the savannahs of long ago?”

17. “…few can sojourn long within the unspoilt wilderness of a game sanctuary, surrounded on all sides by its confiding animals, without absorbing its atmosphere; the Spirit of the Wild is quick to assert supremacy, and no man of any sensibility can resist her.”

18. “To witness that calm rhythm of life revives our worn souls and recaptures a feeling of belonging to the natural world. No one can return from the Serengeti unchanged, for tawny lions will forever prowl our memory and great herds throng our imagination.”

19. “There is something about safari life that makes you forget all your sorrows and feel as if you had drunk half a bottle of champagne — bubbling over with heartfelt gratitude for being alive.”

20. “In Africa you have space…there is a profound sense of space here, space and sky.” 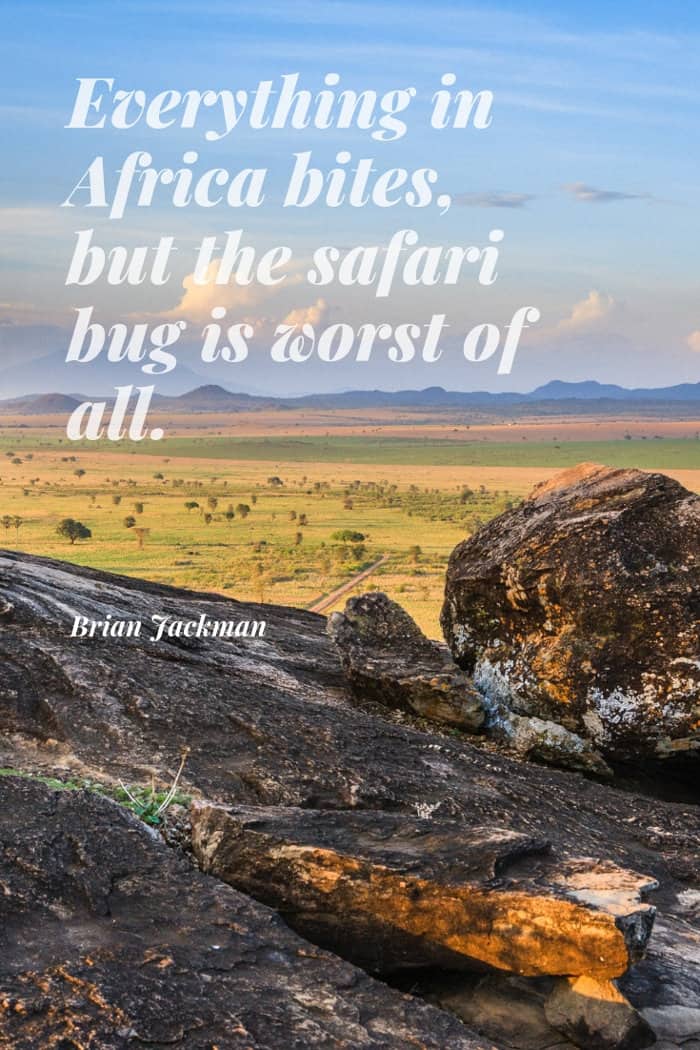 21. “Everything in Africa bites, but the safari bug is worst of all.”

22. “The biggest lesson from Africa was that life’s joys come mostly from relationships and friendships, not from material things. I saw time and again how much fun Africans had with their families and friends and on the sports fields; they laughed all the time.”

23. “For as long as I can remember, I have been passionately intrigued by ‘Africa,’ by the word itself, by its flora and fauna, its topographical diversity and grandeur; but above all else, by the sheer variety of the colors of its people, from tan and sepia to jet and ebony.”

24. “The most hazardous part of our expedition to Africa was crossing Piccadilly Circus.”

26. “You know you are truly alive when you’re living among lions.”

27. “There is always something new out of Africa.”

28. “But African time was not the same as American time…As African time passed, I surmised that the pace of Western countries was insane, that the speed of modern technology accomplished nothing, and that because Africa was going its own way at its own pace for its own reasons, it was a refuge and a resting place.”

29. “There is a language going on out there – the language of the wild. Roars, snorts, trumpets, squeals, whoops and chirps have meaning derived over eons of expression…we have yet to become fluent in the language – and music – of the wild.”

31. “For magnificence, for variety of form and color, for profusion of brilliant life — bird, insect, reptile, beast — for vast scale — Uganda is truly the ‘Pearl of Africa’.”

32. “He could tell by the way the animals walked that they were keeping time to some kind of music. Maybe it was the song in their own hearts that they walked to.”

34. “The continent is too large to describe. It is a veritable ocean, a separate planet, a varied, immensely rich cosmos. Only with the greatest simplification, for the sake of convenience, can we say ‘Africa’. In reality, except as a geographical appellation, Africa does not exist.”

35. “If I know a song of Africa, of the giraffe and the African new moon lying on her back, of the plows in the fields and the sweaty faces of the coffee pickers, does Africa know a song of me? Will the air over the plain quiver with a color that I have had on, or the children invent a game in which my name is, or the full moon throw a shadow over the gravel of the drive that was like me, or will the eagles of the Ngong Hills look out for me?”

36. “One of the great things about travel is that you find out how many good, kind people there are.”

37. “The eye never forgets what the heart has seen.”

38. “Behold the zebra on the plains, and shudder at his mighty manes!”

40. “It was wildest, untouched Africa, and it was magic.” 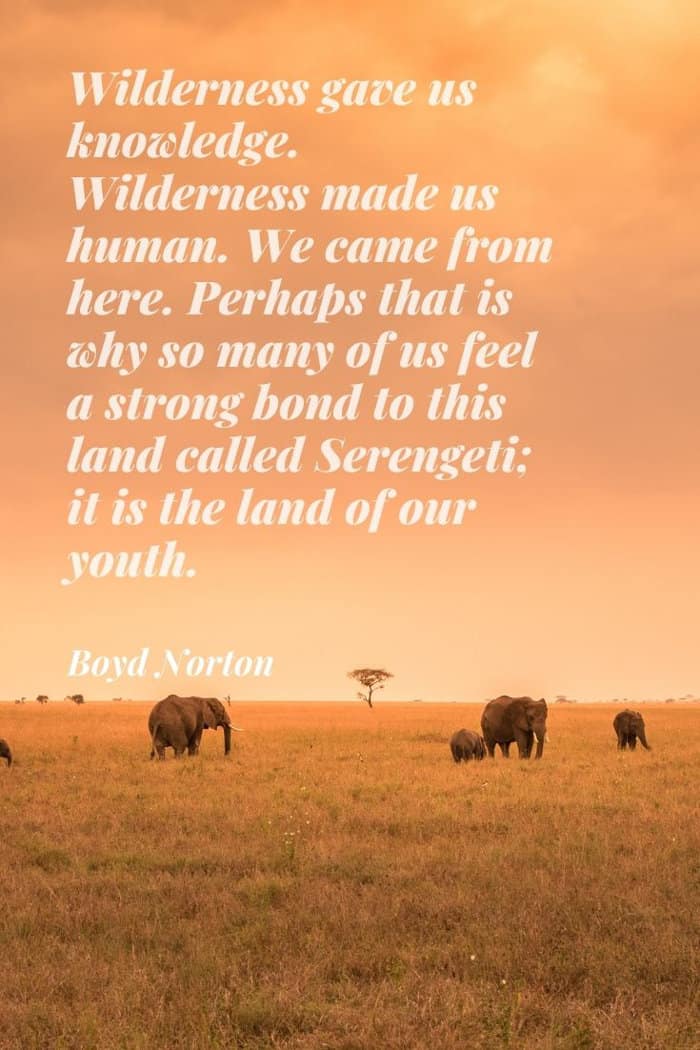 41. “Wilderness gave us knowledge. Wilderness made us human. We came from here. Perhaps that is why so many of us feel a strong bond to this land called Serengeti; it is the land of our youth.”

42. “They say that somewhere in Africa the elephants have a secret grave where they go to lie down, unburden their wrinkled gray bodies, and soar away, light spirits at the end.”

43. “Having travelled to some African countries, I find myself, like so many visitors to Africa before me, intoxicated with the continent. And I am not referring to the animals, as much as I have been enthralled by them during safaris in Kenya, Tanzania, and Zimbabwe. Rather I am referring to the African people.”

44. “The gladdest moment in human life, me thinks, is a departure into unknown lands.”

45. “People must feel that the natural world is important and valuable and beautiful and wonderful and an amazement and a pleasure.”

49. “I went to South Africa on safari and came eye to eye with a beautiful leopard. We were so close; I was staring at him for a long time and I felt a recognition with my own nature.”

50. “To my mind, the greatest reward and luxury of travel is to be able to experience everyday things as if for the first time, to be in a position in which almost nothing is so familiar it is taken for granted.” 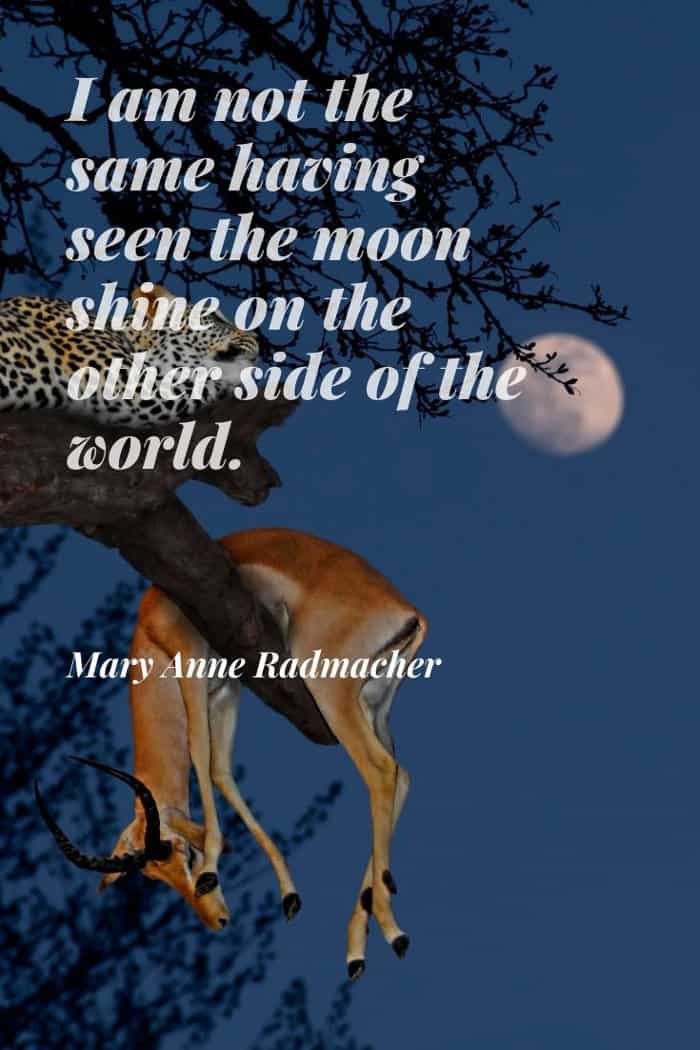 51. “I am not the same having seen the moon shine on the other side of the world.”

52. “All I wanted to do was get back to Africa. We had not left it, yet, but when I would wake in the night I would lie, listening, homesick for it already.”

54. “The love of all living creatures is the most noble attribute of man.”

55. “A giraffe is so much a lady that one refrains from thinking of her legs, but remembers her as floating over the plains in long garb, draperies of morning mist her mirage.”

56. “Traveling – It leaves you speechless, then turns you into a storyteller.”

57. “Everytime I look at a zebra, I can’t figure out whether it’s black with white stripes or white with black stripes, and that frustrates me.”

58. “I hope you have an experience that alters the course of your life because, after Africa, nothing has ever been the same.”

59. “I believe that no one could perceive where the vast body of water went; it seemed to lose itself in the earth, the opposite lip of the fissure into which it disappeared being only 80 feet distant.”

* David Livingstone (Scottish physician and explorer; Livingstone quote about his first sight of Victoria Falls in 1855)

60. “I need Africa to remind me that beauty has many faces and that giving has many hands.” 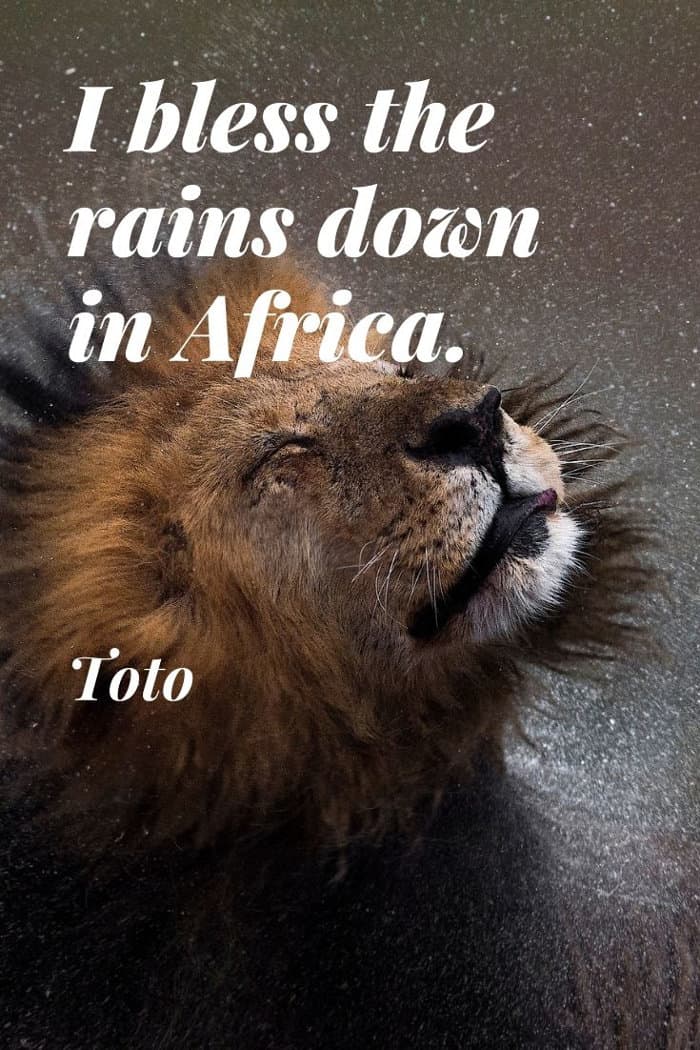 62. “When you have caught the rhythm of Africa, you find out that it is the same in all her music.”

63. “To travel is to discover that everyone is wrong about other countries.” 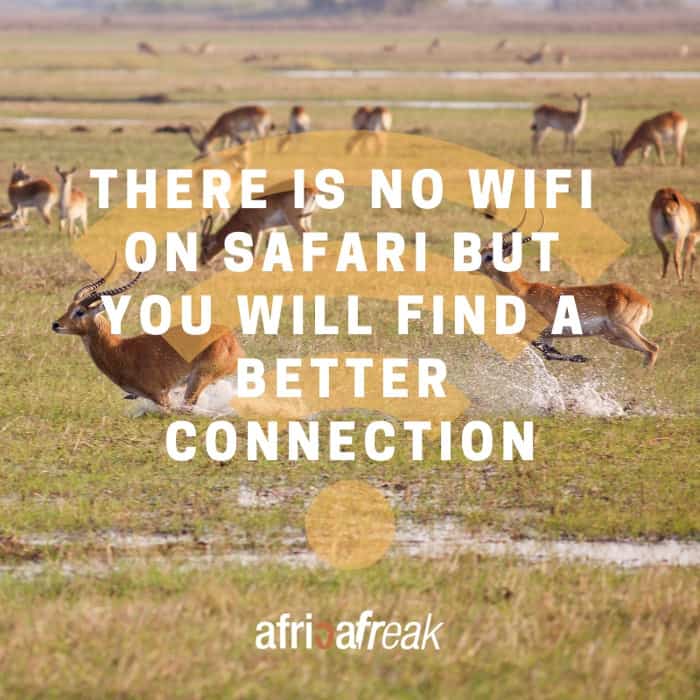 “There is no wifi on safari, but you will find a better connection.”

There are so many more to inspire me and others. Share them below and inspire people. 🙂 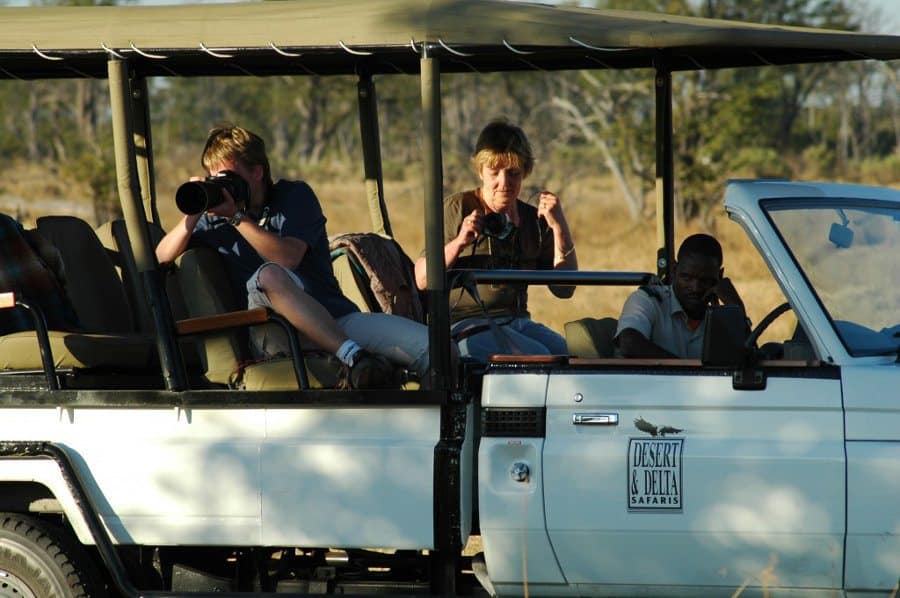 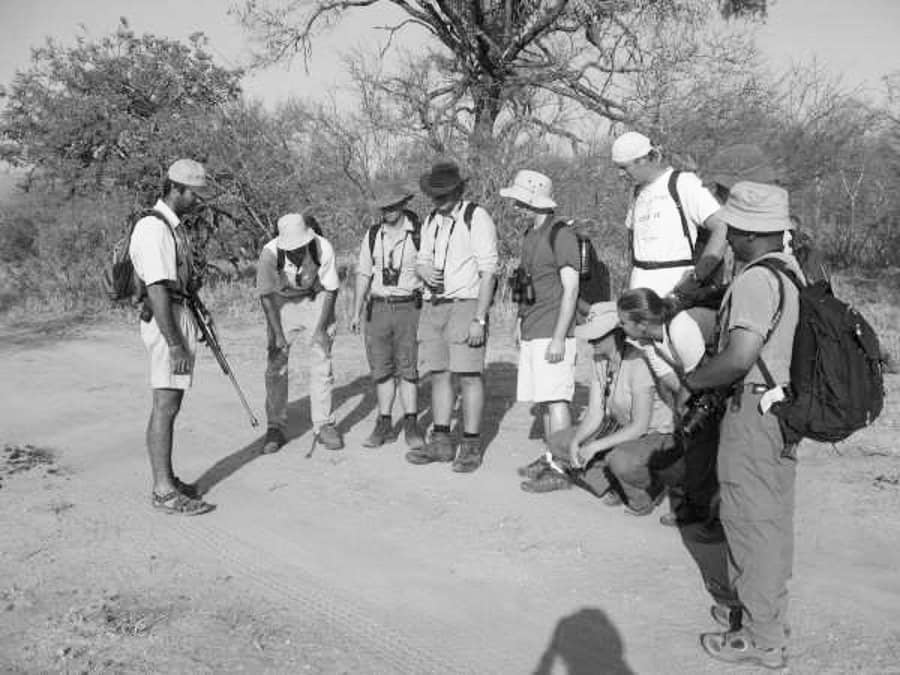