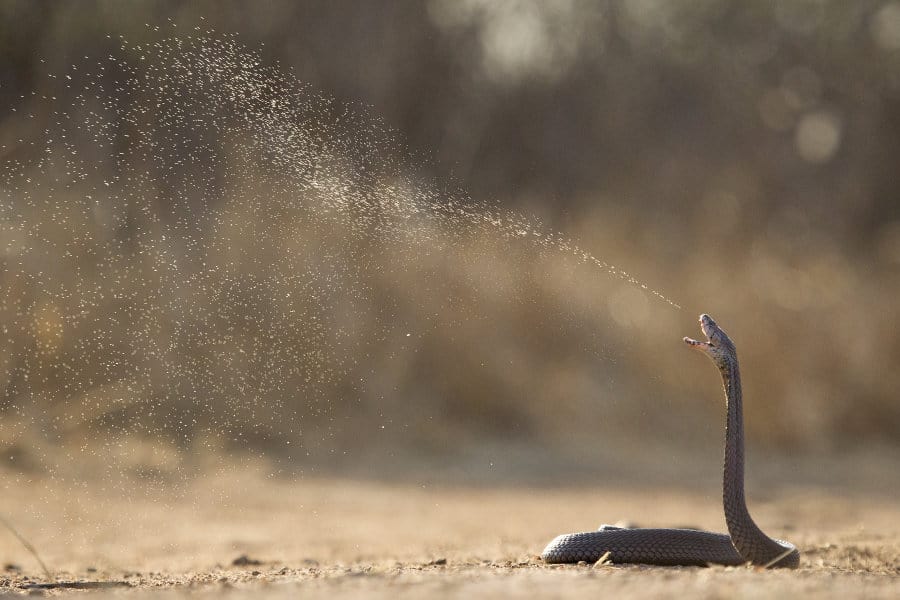 The Mozambique spitting cobra is one of several species of cobra which project venom from their fangs in self-defense. It is the most common cobra found in the savanna regions in tropical and subtropical Africa.

Favoring spots close to water, these cobras find refuge in rocky areas, termite mounds, or hollow logs. They are retiring snakes, which means that they prefer flight over fight if confronted with a threat.

The cytotoxic venom that the spitting cobra shoots with extreme accuracy, is highly venomous. And it is one of the most dangerous animals in Africa.

Its scientific name is Naja Mossambica, but it goes by a few other local names too. Mosambiekse spoegkobra in Afrikaans or M’fezi in Shangaan language.

Learn everything you need to know about the Mozambique spitting cobra, prevalent throughout Southern Africa as far as southern Angola and Tanzania. 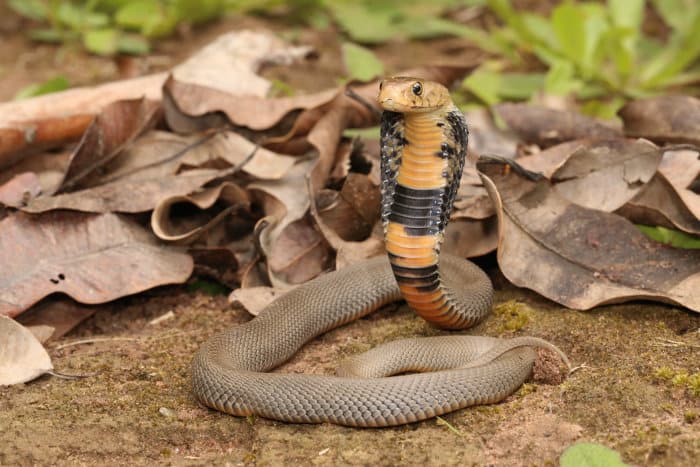 The dorsal scales, which are the top and side scales, range in color from light to dark brown or olive. A dark edge rims some or all of the dorsal scales on a Mozambique spitting cobra. The skin between the scales is black, which gives it a net-like appearance.

The ventral scales, which make up the underside of the snake’s body, are a light salmon-pink or yellowish color. The ventrals are often speckled or edged in dark brown or black.

Black blotches form a distinct band across the bottom of the throat on the ventral scales. In juveniles, the bands can be pink or yellow.

They have an overall ‘shiny’ appearance and can be easily confused with the snouted cobra which has similar colors but a darker back. It is a beautiful and unassuming African snake.

How Venomous is the Mozambique Spitting Cobra?

The Mozambique spitting cobra’s venom is about as toxic as the American Mojave rattlesnake and is one of the most dangerous snakes in Africa. It is responsible for many of the average 1.5 million snakebites suffered in Sub Saharan Africa.

To understand how a snake bite will affect its prey, knowing the type of venom it injects is important.

There are three categories of toxins that the snakes of Africa fall into. Haemotoxic disrupts the blood system causing internal bleeding, while cytotoxic venom attacks the cells and neurotoxic venom affects the nervous systems.

The venom of the Mozambique spitting cobra falls under the cytotoxic category. Cytotoxins completely destroy cells and ‘rots’ the flesh around the bite. As the venom spreads throughout the body, the cytotoxins attack the organ cells.

The Mozambique spitting cobra bite is fatal for its prey and can be deadly to humans too.

Spitting cobras aim for the eyes, and the venom causes inflammation of the eyes and can lead to blindness in extreme cases.

What Does the Spitting Cobra Eat? 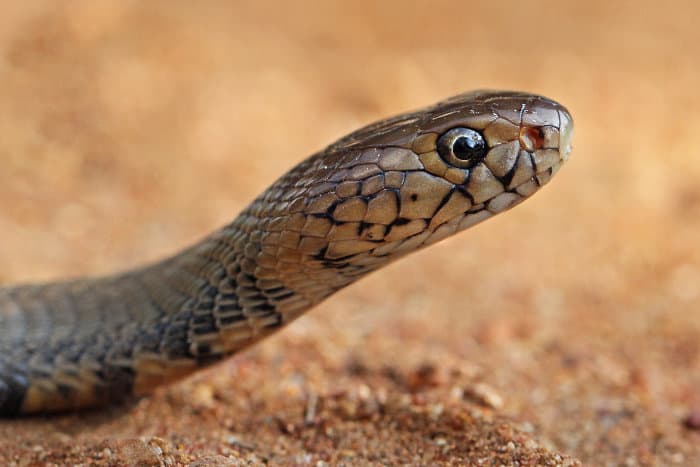 While it is not a scavenger animal, the Mozambique spitting cobra will sometimes scavenge and eat carcasses. Even if it is severely decomposed, however, this is not a common food choice.

It is a cannibal too. The Mozambique spitting cobra will prey on other snakes. Sometimes making a meal out of the puff adder, a notoriously dangerous and venomous snake of Africa.

Luckily, it is not prey to many animals. Nevertheless, there are some snakes that will eat them, especially when they are younger and smaller in size.

The ability to project a stream of venom is due to the unique dentition of the Mozambique spitting cobra.

The modified, fixed front fangs of the snake have openings at the bottom front. These exits aim forwards at a right angle to the fang.

These unique modifications allow the cobra to shoot venom from down on the ground or in a reared up position. From either position, the cobra can open its mouth and eject a substantial amount of venom at the perceived threat.

The accuracy and distance of the spray are impressive, with the precise aim of up to almost 10 feet (3 m). Spitting cobras shoot for the eyes in an attempt to debilitate the attacker. 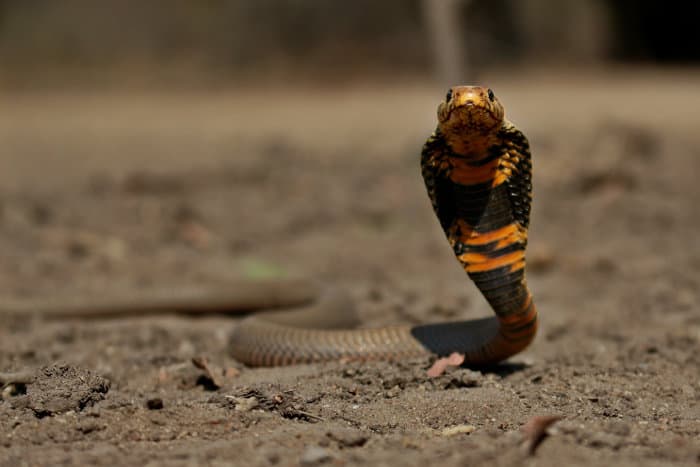 Unlike the black mamba or puff adder, the Mozambique spitting cobra is quick to flee threatening situations. It is a nervous and temperamental snake.

If cornered, it will often rear up as much as two-thirds of its length and open its hood. This is a defensive position and the cobra commonly spits venom from a reared position.

In fact, these cobras will sometimes play dead to avoid persistent harassment or aggression from a human or animal. Its main defense, after fleeing or hiding, is to spit venom.

This spitting cobra species is most active on overcast days, when it is cooler, or in the night. However, juveniles roam around during the day when the sun is out.

Because of the nocturnal movements, the snakes can mistakenly land up in houses. Most Mozambique spitting cobra bites occur while people are sleeping.

Despite being one of Africa’s most dangerous snakes, the Mozambique spitting cobra is pretty timid and non-confrontational. It is quick to flee and hide and will attempt to avoid wasting its precious, albeit seemingly infinite, venom on anything other than food.

Smaller in size than its spitting cousins, it can still mount a pretty impressive defense. Standing up to two-thirds of its body and spraying toxic venom with astounding accuracy, the Mozambique spitting cobra is a deadly snake. 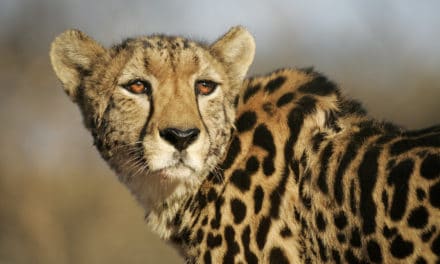 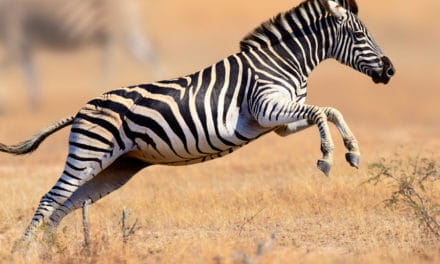 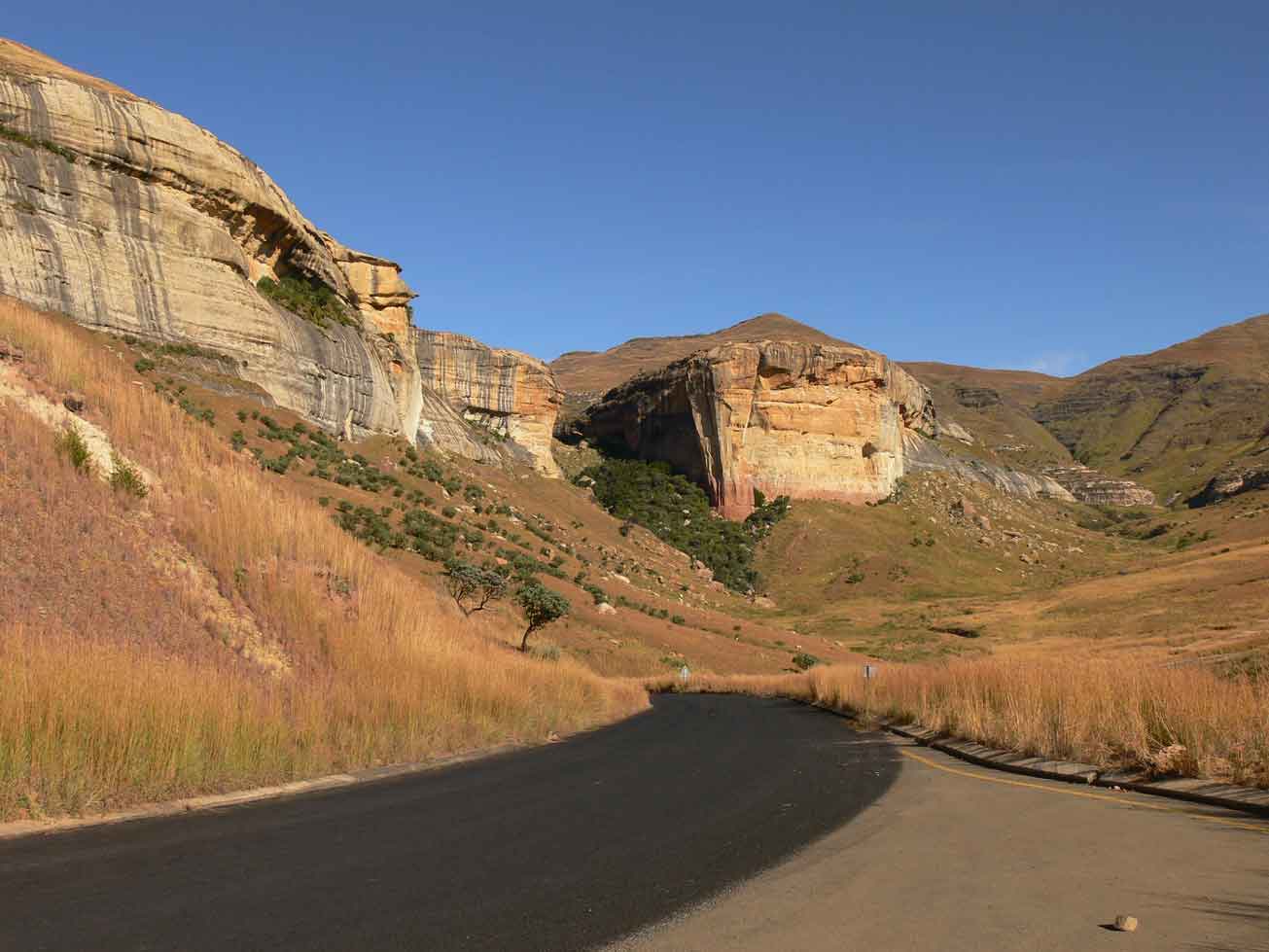 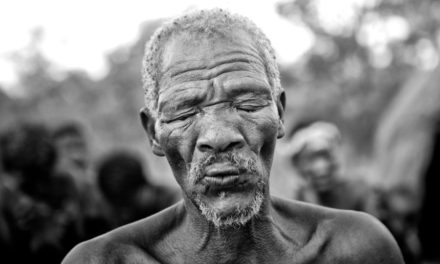