Table Mountain is not only a beautiful picture. It is a wilderness to explore in the heart of Cape Town.

When visitors ask for directions in Cape Town the locals use Table Mountain as the reference. It’s often said that if you keep the mountain to one side and the Ocean to the other, you can’t get lost in Cape Town.

Where is Table Mountain? 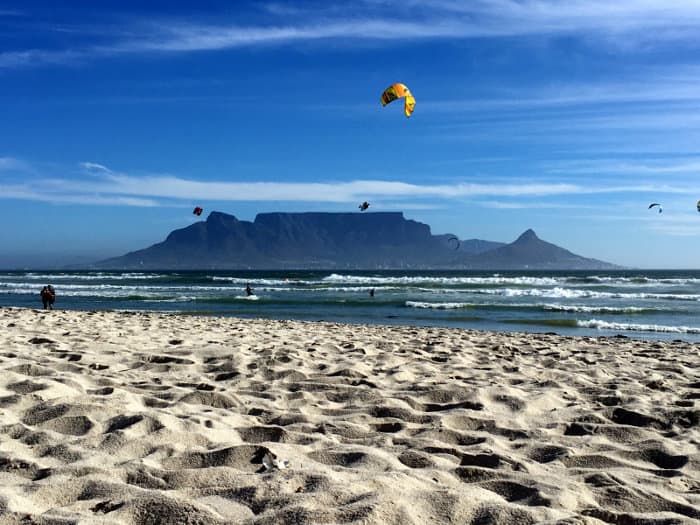 Table Mountain National Park stretches around the city of Cape Town, South Africa. The national park is an incredible 25 000 hectares in size and continues most of the way to the southwestern tip of Africa.

Thanks to great conservation initiatives from SANParks, the park has over 100 well maintained hiking trails, going up, down, around and across the mountain.

Table Mountain – what’s with the name?

Local legend has it that Table Mountain was named after the furniture piece when travelers, António de Saldanha (a Portuguese sailor in 1503) and Joris van Spilbergen (Dutch traveler in 1601), commented on the mountain’s flatness.

The name stuck, especially from 1652 when Dutch settlers arrived in the Cape. Except they didn’t call it Table Mountain. To the Dutch it was Tafelberg, a name still used in the Afrikaans language.

The local name of the mountain, used by the indigenous Khoekhoe, is Hoerikwaggo. It means “mountain in the sea”.

The legend is that the Khoekhoe saw the mountain rise from the sea. Mountain in the sea is definitely the most appropriate name – the Khoekhoe had been living in the area since long before Europeans even invented tables!

A five-day hiking trail runs from the tip of Africa to Table Mountain’s summit. It’s called the Hoerikwaggo trail, in honour of the people who gave this iconic mountain its true name. 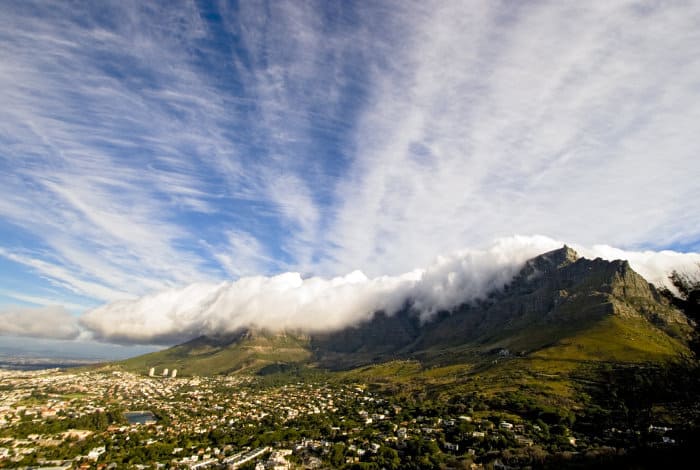 Another legend is how Table Mountain received its white cascading tablecloth. This phenomenon can be seen from anywhere in Cape Town and is one of the city’s most spectacular sights.

A Dutch pirate called Jan van Hunks retired in the Cape and spent his days smoking a tobacco pipe. He was tricked by the Devil to enter a smoking competition. 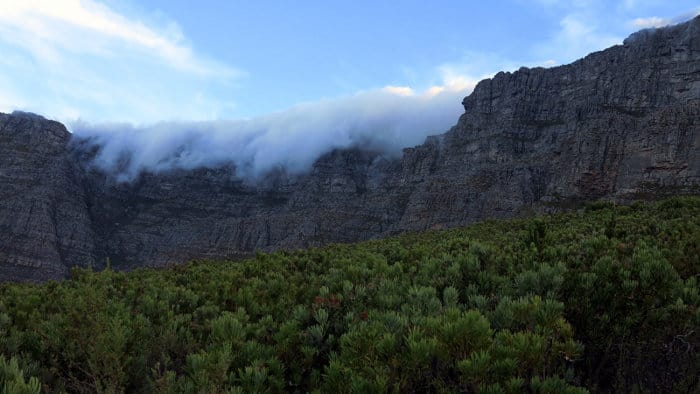 Apparently Jan was a seasoned smoker and keen on his odds of beating the Devil. After several hours, the legend goes that the Devil surrendered as he was tired of smoking, leaving Jan the victor. When they both disappeared from the mountain, all that was left behind was the white cloth of smoke.

An additional legend is that the indigenous San people believed a mantis god threw a massive white kaross (animal skin) on the mountain to smother a raging fire. Given the size of Table Mountain this seems more believable than two people having a smoking competition!

How Do You Get Onto Table Mountain? 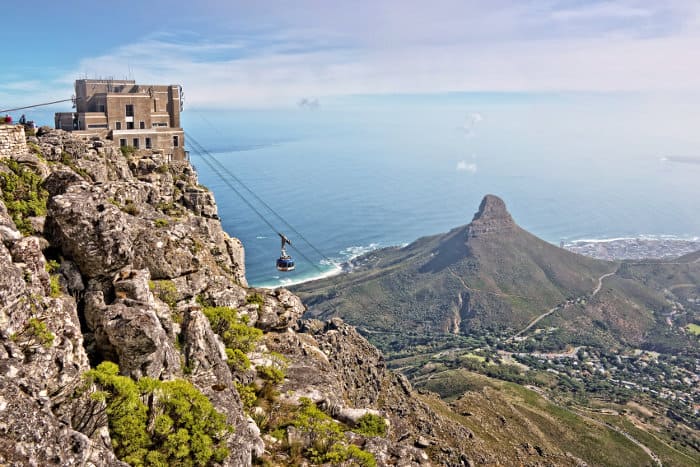 Table Mountain is over 1000 metres high and there are a variety of ways visitors can explore the summit and surroundings.

The Cableway is the most popular way to access Table Mountain’s summit. It is the easiest, shortest (between 4-5 minutes), and is ideal for families with small children who cannot yet hike up.

The great joy of the Cablecar is that it rotates 360 degrees as it is going up, so visitors can observe the rising slopes and the city rescinding down below. 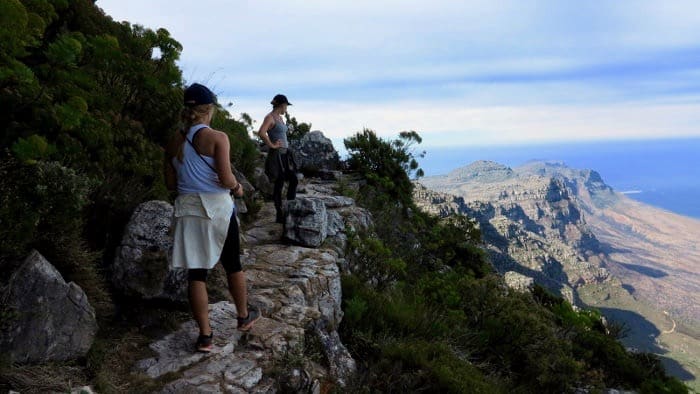 Other options to get on the mountain include quick walks or longer hikes. There are an incredible 350 different walks and hikes on Table Mountain and the trailheads are scattered across the city.

350! Just imagine the sense of wilderness when there are so many different trails for people to explore, so close to a city.

Tranquility is one of Table Mountain’s highlights. With so many trails you can often be alone on the mountain. Many mountains offer a feeling of wilderness but Table Mountain provides it within such close proximity to a bustling city. That’s one reason why visitors and locals love it so much.

The length of these upward hikes vary from one to five hours in one direction. Due to the mountain’s steepness the way up usually takes longer than the way down.

Choosing a hike up Table Mountain

Platteklip Gorge is regarded as the quickest hiking trail and will take between one to two hours, depending on your fitness. This is a ridiculously steep climb and it’s really tough on the legs, so don’t think Platteklip is an easy option.

The India Venster trail is the most popular alternative path. Its name translates as Indian window due to its resemblance of India when seen from the top. It is often attempted by visitors who are ill-prepared for its steepness. Never attempt Indian Venster if you have never trekked on a mountain before. It is tough and dangerous for the unprepared.

Skeleton Gorge is a hike on the eastern part of the mountain. It is often recommended by locals due to the rich forest surrounds and the shading it provides.

The Pipe Track is a great exploratory walk starting on Kloof Nek road and it does not take visitors to the top. The track is mainly on the western part of the mountain providing views of Camps Bay and the South Atlantic Ocean. 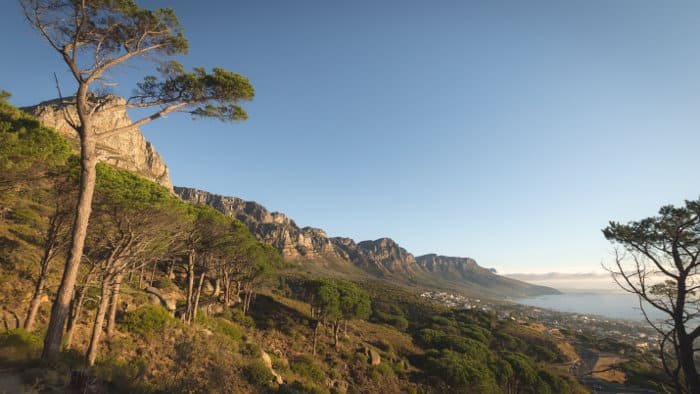 The Woodstock Cave trail is a popular picnic spot on the slopes of Table Mountain that overlooks the city. It starts at Rhodes Memorial above the University of Cape Town.

Table Mountain has such diversity on its slopes and it may sometimes be a bit of a workout. Try to prepare for the hikes as if you are going to an outdoor gym (a gym with a bit more of sunshine and wind to contend with).

Before you embark on the hike, check the weather forecast as the wind and temperature might literally change overnight. A handy tip is to dress in layered comfortable clothing (better to remove a layer when you are hot than not to have a wind-breaker when you need one) and shoes (hiking boots are certainly better than flipflops).

As most hikes are a few hours it is recommend to bring a water bottle and trail snacks to keep your blood sugar stable. Once the summit is reached all the preparation and effort will have been worth it!

What can you find on Table Mountain? 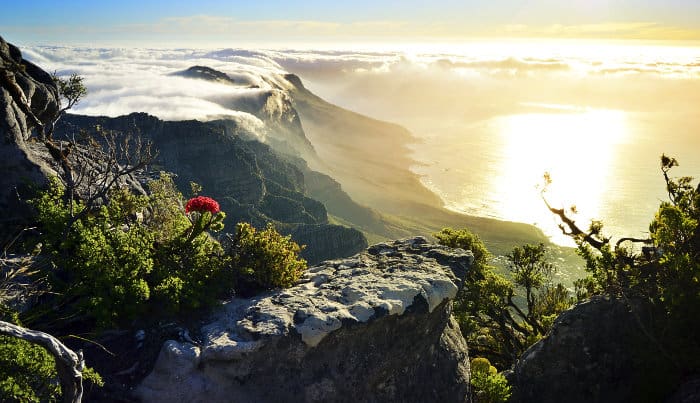 Once visitors have reached the top, whether it is on foot or via the Cableway, it is hard not to want to spend a few hours exploring the surroundings.

The views are far reaching and magnificent. On the summit there are restaurants with Wi-Fi access for visitors, so you can share your love for Table Mountain with the world, without delay.

The area around the Cableway station and restaurants can get very busy with visitors. However, you only need to walk 20 minutes to be completely away from the crowds. 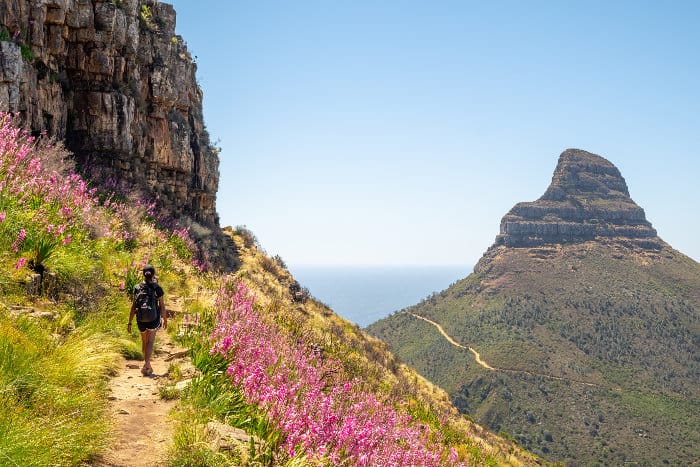 Table Mountain is one of the homes of indigenous vegetation called fynbos (loosely translated as fine bush) that provides flowers and beautiful colours the whole year round. Fynbos includes approximately 8500 plant species such as the Protea and Erica families.

On closer inspection the mountain has many other exciting vegetation types too; like a small carnivorous plant called the “sundew“. Another noteworthy plant is the Disa Uniflora that is sometimes called the “Pride of Table Mountain”.

Most plant species get propagated through small bush fires and thus the vegetation on Table Mountain is susceptible to runaway fires. It is very important that you do everything possible to limit the risk of runaway fires. 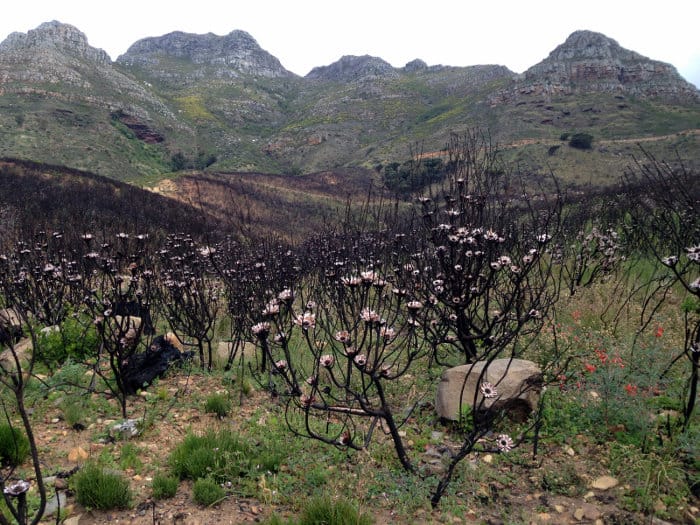 Runaway bush fires often get started with neglected water bottles or lit cigarette buds; please help minimize the risk they pose by picking them up and disposing of them.

It is not advised to start a fire for barbequing unless there is a clear sign for this. You will find SAN Parks’ fire regulations for each region at the start of each hike/trail/walk.

Look out for the following fauna

Table Mountain is the habitat of many small and large African animals. Visitors might easily spot some of the smaller reptiles (like lizards, frogs, tortoises), or mammals (like dassies and mongooses) on your walk.

The dassie, (Rock hyrax) is small in stature and looks a bit like a wild guinea pig. They are vegetarians that like to bask in groups in the sun in the mornings and late afternoons. 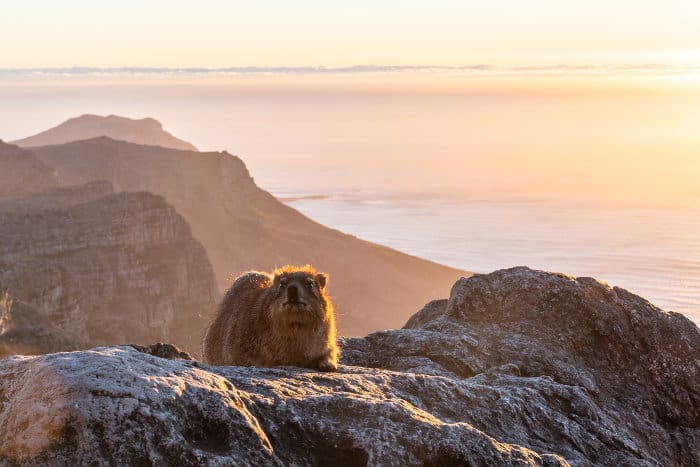 The Cape gray mongoose is a tiny scavenger that prefers rodents over insects as food. As omnivores they have grown used to urbanization and thus enjoy an egg or small meal wherever they can get it from.

A feast for the eye awaits for birdwatchers, with birds like the orange-breasted sunbird or the ground woodpecker.

Larger animals travel in herds and can be seen at the foot of the mountain. These include eland, red hartebeest, bontebok and zebra. Locals know that when they appear close to Hospital Bend on the M3, then rain is on its way.

The Weather on Table Mountain 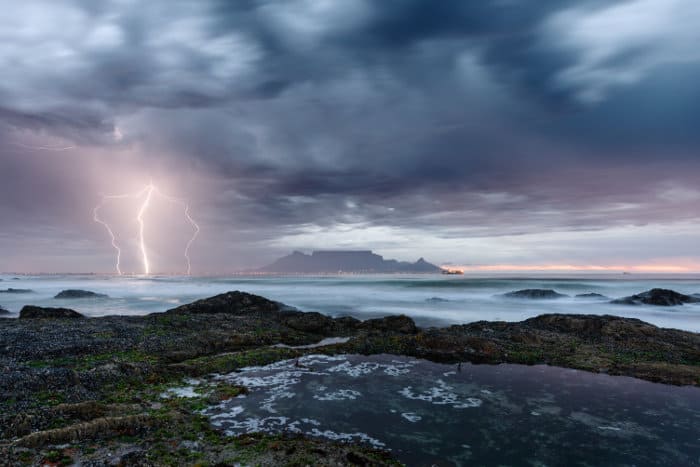 Cape Town is known for its various weather pockets and micro-climates. Table Mountain often has weather unique to anywhere else in the city.

The weather is fast changing and may result in high wind speeds, temperature drops and a lack of visibility due to fog. This may cause the Cableway to be closed for an hour or two at short notice.

Visitors should be well prepared for the fluctuations in temperature on their walks, hikes or cable car ride to the top of Table Mountain.

The beautiful tablecloth cloud that occurs predominantly in summer may cause temporary invisibility on top of Table Mountain. Please keep this in mind when planning a hike or a walk.

Think of Table Mountain and the tabletop image with two surrounding summits come to mind. It is Cape Town’s iconic postcard image.

However, there is a lower flat summit behind the famous front known as the “back table” and it holds five reservoir dams.

Table Mountain was a drinking water source for the Khoi people, and later to settlers.

During Cape Town’s drought, starting in 2015 and lasting approximately 3 years, many residents look to these dams as an optional resource for the city’s dilemma.

Today the dams are full. They are beautiful sights and provide peaceful spaces after a good hike. 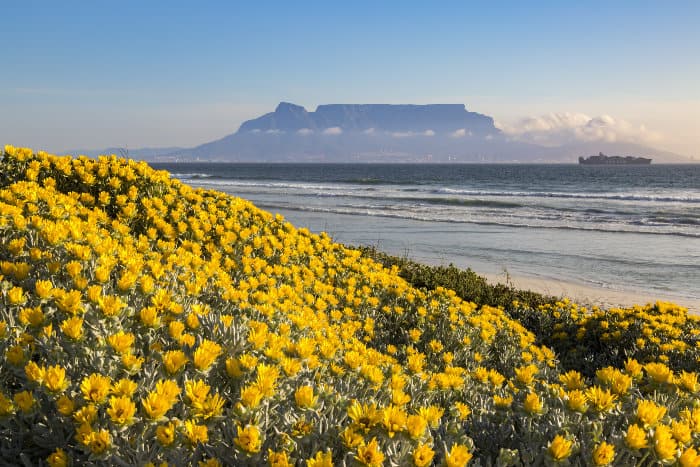 In 1998 Nelson Mandela proclaimed that Table Mountain is a “gift to the earth” and the locals of Cape Town agreed in unison.

The towering presence of Table Mountain over the city makes it impossible not to stop and appreciate it at least once a day.

It is now known that Table Mountain is one of the oldest mountains in the world at 240 million years old, so it is not surprising that scores of geologists, conservationists and biologists continue to flock to Cape Town year after year.

In October 2019 the Cableway will celebrate 90 years of transporting people up the slopes of Table Mountain to the top. Another impressive milestone is that in January 2019 Table Mountain welcomed the 28th million visitor to the summit. 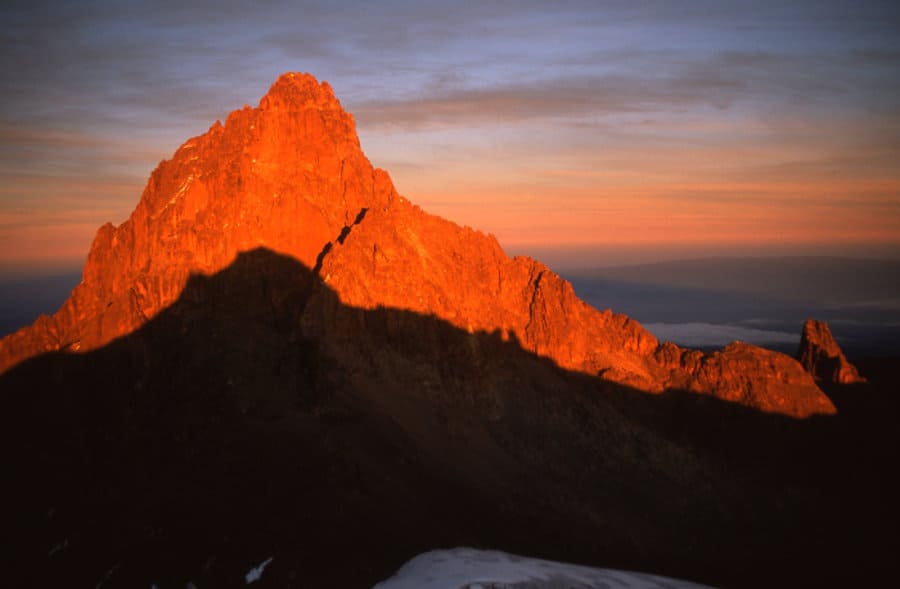 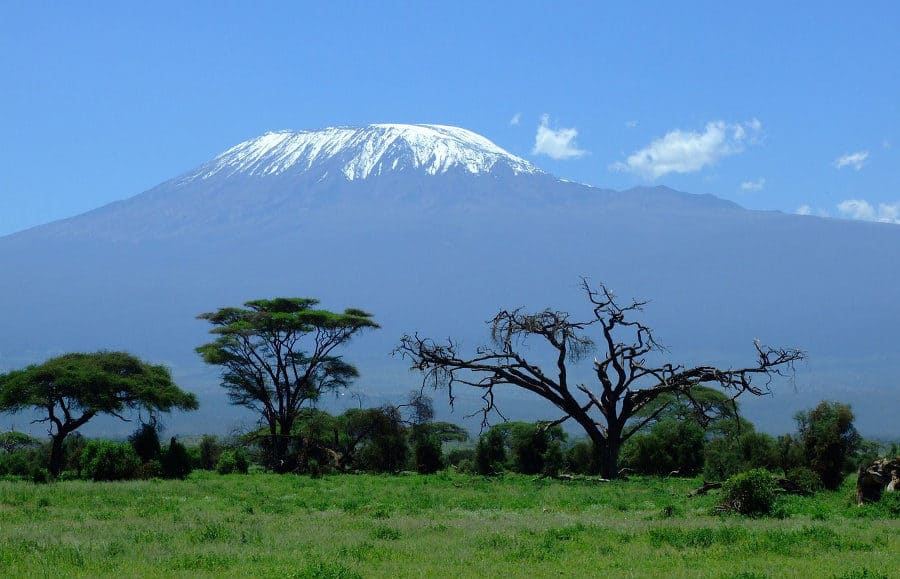 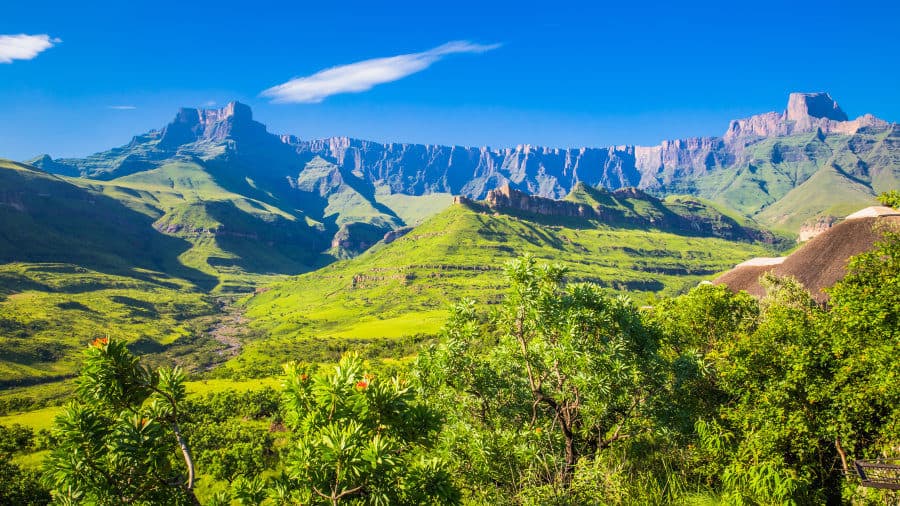