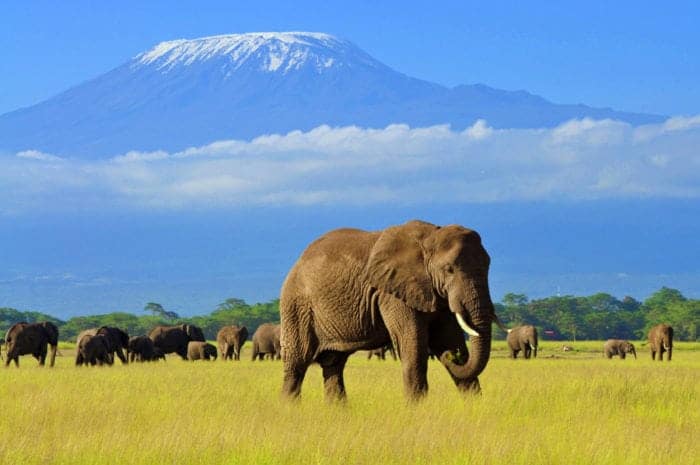 Is there a more poignant safari image than a herd of elephants roaming beneath Mount Kilimanjaro? That’s the highlight of Amboseli, a relatively small park with a lot to offer.

The mix of safari activities makes it a good first-time safari stop and it’s best to spend two or three days so you can try it all out. Expect incredible photos and wildlife viewing, with most of Africa’s famous animals (except for rhino) in one place.

Best Time to Visit Amboseli: June to September is best but it can feel very crowded in July and August. January to March before the rains is also prime.

Also Consider: The elephants of Chobe National Park (in Botswana).

Combine With: The Maasai Mara. 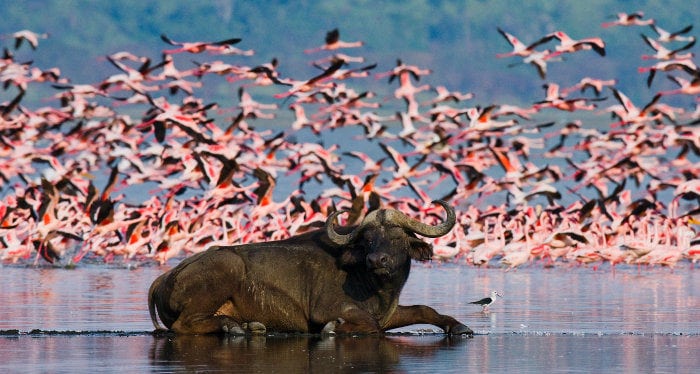 Great For: An easy one-day safari.

Highlights: Black and white rhinos plus a million flamingos.

Lake Nakuru is amongst the very best places to spot rhinos in East Africa. Although the park doesn’t always have that raw and wild feel synonymous with the rest of Kenya, seeing black and white rhinos in one place is incredibly rare.

The rest of the big five can also be found, along with a lake that’s coloured pink by all the flamingos. With its location and size, Nakuru becomes a popular stopping point on a longer Kenyan itinerary, although we’d recommend spending the night so you can go looking for leopards on a sunrise drive.

Best Time to Visit Lake Nakuru National Park: This is a year-round destination.

Combine With: Any of the other Kenya safari destinations. 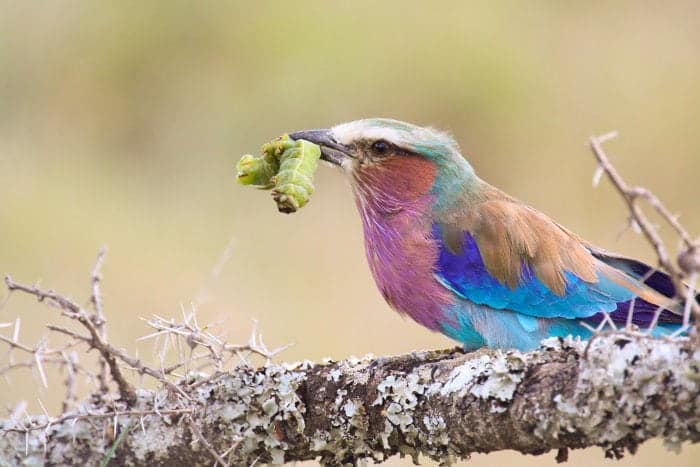 A number of private conservancies are found in the heart of Kenya, nestled in wilderness areas that allow a wide range of wildlife to thrive. Lewa and Ol Pejeta are the most famous and the best for luxury and service, not to mention the intensity of wildlife encounters.

For a short three-day safari it’s a great chance to get close to so many different animals, without jumping out of your comfort zone. These are both fairly expensive though, not least because of the presence of black rhinos and chimpanzees.

Also consider conservancies nearby like Ol Jogi, Borana, Lekurruki and Leparua. They have more of a community feel, along with all the weird and wonderful wildlife.

Best Time to Visit Lewa Wildlife Conservancy: With their conservation programs and varied habitats, these conservancies work as year-round destinations.

Also Consider: A private concession in Samburu for a wilder safari.

Combine With: Samburu and Maasai Mara for a classic Kenyan safari experience. 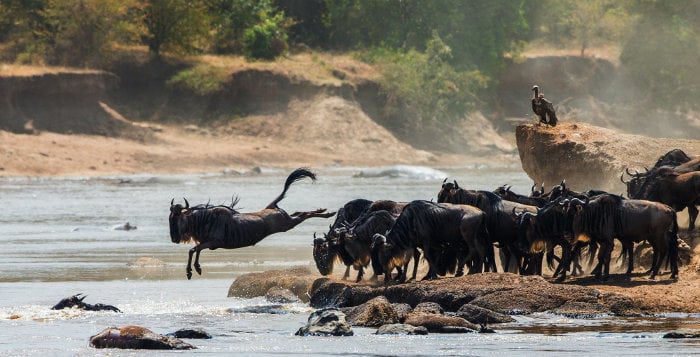 One of Africa’s most evocative images, the Maasai Mara is where gazelle, wildebeest and zebra play on seemingly endless grasslands. In season there are well over a million ungulates here, which naturally supports a magnificent abundance of predators.

For big cat viewing there are few better places, especially because the predators (other than vultures and hyenas) don’t actually follow the migration, but stay in the Maasai Mara to protect their home territories.

The main national reserve provides entry-level safaris; we’d recommend considering one of the smaller private concessions as well, which offer heightened exclusivity and a chance to go off the trail and get closer to the predators.

Yes the Maasai Mara is famous, for the herds, the cats, the hot air ballooning and the landscapes. And yes it’s popular. But that’s for very good reason.

Best Time to Visit the Maasai Mara: From July to September the great wildebeest migration charges over the Mara River to graze in the Maasai Mara. Naturally this is the peak time to visit but the park gets very busy. Not all the animals migrate and you can enjoy a more personal experience outside the migration months.

Also Consider: Tanzania’s Serengeti is part of the same ecosystem but is larger, so it can absorb peak season visitors a little easier.

Combine With: Amboseli or Samburu for a two-stop safari; Tanzania’s northern circuit for a 10 – 12-day safari. 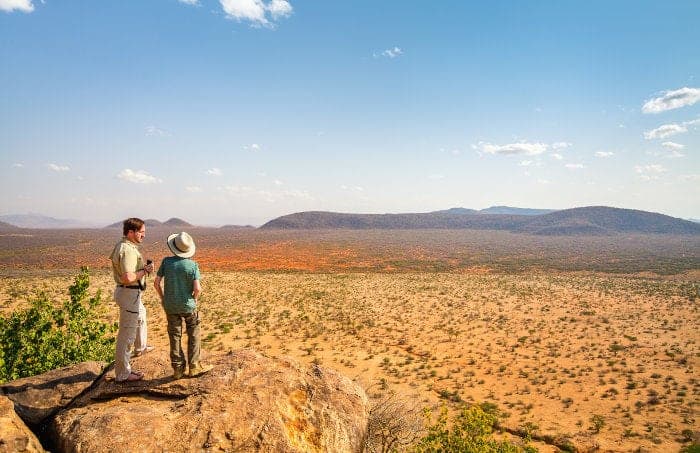 Great For: Wilderness experiences and a complete escape from the world.

The Samburu is one of Africa’s great wilderness areas. Found in the north of Kenya it’s a land that’s still dominated by the Samburu tribe, along with all manner of wildlife that call this elevated plateau home. The experience is about going off the beaten track, rather than ticking animals off your list.

You’ll want at least three days and you shouldn’t miss the walking safaris, which could be anything from two hours to two weeks. If it’s wilderness you seek then the Samburu dances to the beat of old, wild Africa.

The accommodation elevates the experience, whether it’s a community-style camp or one of the hyper-exclusive camps perched above the plains.

Best Time to Visit Samburu National Reserve: It’s probably best to avoid the main rainy months of April and May. The rest of the year is great; January to March is probably the ultimate time to go.

Combine With: The Maasai Mara and then one of Kenya’s Indian Ocean beach destinations, like Malindi or Diani. 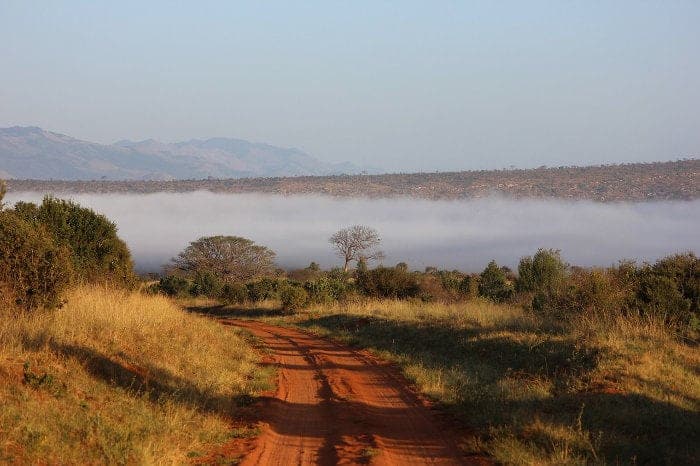 Great For: Combining safari with the beach.

Highlights: The unpredictability and ease of the safari.

Two vast parks separated by a major railway and road, Tsavo isn’t the ultimate destination in Africa, nor Kenya. But there’s magic here, especially if you can spend more than one night.

Animals revolve around permanent waterholes and you’ll come across a wide sweep of famous mammals (other than rhino), given a little patience.

The great benefit is accessibility. Kenya’s coastline of white sand is as good, if not better than any Indian Ocean island (including the Maldives). Holiday on the beach and you can easily include a short Tsavo safari to complement the escape.

Best Time to Visit Tsavo West and Tsavo East: The same as the best time to visit the coast. December to March and June to September.

Also Consider: A holiday in Tanzania mixing Zanzibar beaches with the Serengeti.

Combine With: The beach!