The African side-necked turtle is one of the continent’s most unusual animals. It’s distinguished by its friendly, adorable face, a face you want to gaze upon and possibly even kiss.

With its large, round eyes and big mouth this turtle always looks like it’s smiling!

The African side-necked turtle gets its name from the way it tucks in its head. Unable to completely hide inside its shell, it instead folds its head to the side and tucks it underneath the upper edge of the shell.

The sideneck is small and easy to miss, with most individuals measuring less than 20 cm in carapace length. Also known as the African helmeted turtle, marsh terrapin, or West African mud turtle, it has a lifespan of 25 to 30 years. 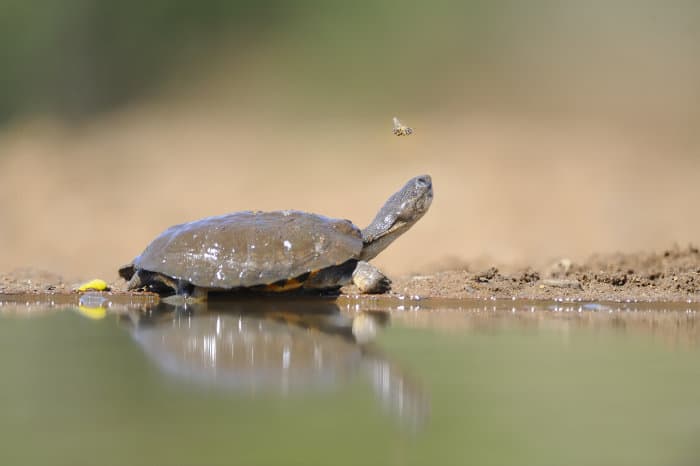 The African side-necked turtle’s skin colour varies among individuals from tan and dark brown, to grey and black. The head is anywhere between olive and brown with a black marking at the top. Its underbelly is yellowish in colour, while the limbs and top of its tail are greyish brown.

African side-necked turtle feet are slightly webbed, with long, sharp claws. Males are distinguished by their long, thick tails, while the females have shorter tails and broader shells. Hatchlings are olive to black in colour, and have a shell of about 3 cm in length.

Unlike other members of its species, the lower shell of the African side-necked turtle is not hinged. A hinged lower shell enables other turtles to fully cover their heads and front limbs.

However, this turtle has a unique characteristic that most others do not. When it turns upside down, the African side-necked turtle is able to get back on its feet by vigorously flicking its long muscular neck.

Where to see the African side-necked turtle

Native to sub-Saharan Africa, the African side-necked turtle lives in many parts of the continent, including Madagascar and the Seychelles. Its geographic range spans a large area, from the Sudan to the Cape Peninsula. It can also be admired as far west as Ghana.

In the wild, this semi-aquatic turtle is found in a range of natural freshwater habitats. It has a preference for still water bodies such as pans, dams, swamps and lakes. It is also found along African rivers, albeit to a lesser extent.

In addition to permanent water bodies, it may inhabit shallow pools and seasonal ponds.

How fast can it go? 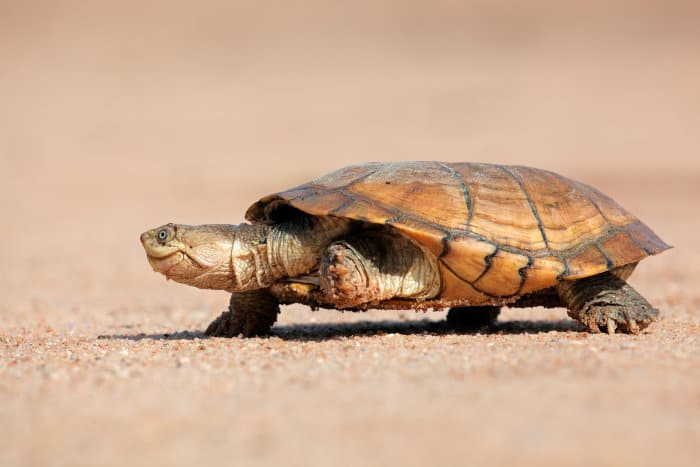 African side-necked turtles are incredibly agile. They use flippers as undersea paddles to swim at almost 20 km/h in the water.

As soon as they leave dry land, new-born hatchlings can swim around 40 kilometres in 30 hours! Female turtles usually swim faster than males, as well as their babies in order to protect them from predators.

Sidenecks come ashore mainly to lay their eggs. On land, the African side-necked turtle travels slowly at 3 to 4 mph. Even when they hurry, they can’t go very fast.

Courtship occurs all year round among African side-necked turtles.

The male follows the female while nodding his head in front of her. If unwilling, she will nip, snap and then walk away. But if willing, she will respond by nodding her head or will simply stand still and enable him to mount her. During mating, both turtles shake their heads.

Females lay an average of 2-10 eggs per clutch, sometimes multiple clutches in a year. Egg laying normally occurs from late spring to early summer. The female lays its eggs into a nest about 10-18cm deep. They are elongate with leathery shells and hatch after 75 to 90 days.

What the African side-necked turtle eats 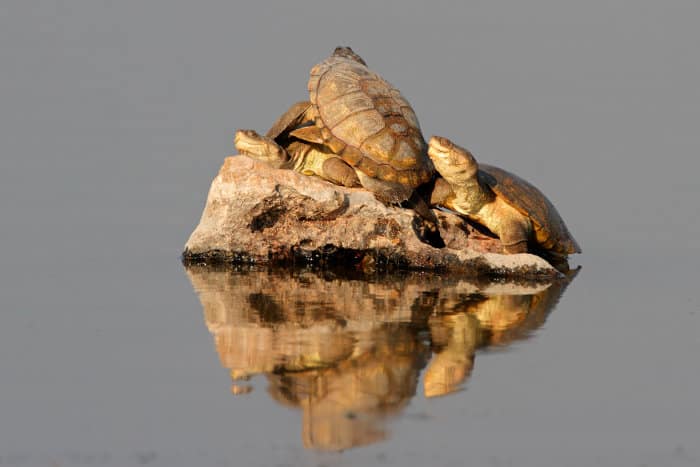 The African side-necked turtle is omnivorous and will eat almost anything it comes across, including fish, insects, amphibians, water lettuce, aquatic grasses and fruits.

It is also known as the crocodile turtle because its behaviour is sometimes confused with that of its distant relative – the crocodile. It earned this name thanks to the fact that it is the only turtle species known to attack its prey in groups! 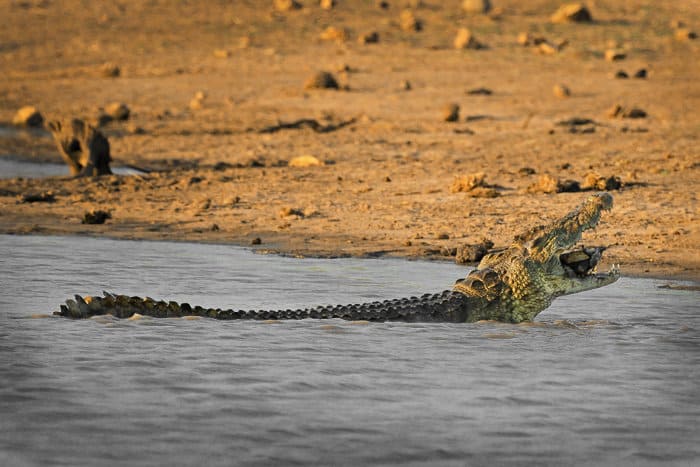 Group attacks usually occur when the turtle population density is at a high level. Multiple turtles will attack, drown and kill water birds, fish, snakes, or other turtle species that come to drink. They tear the prey apart using their fine claws.

The turtles then drag their prey underwater to be eaten. These group attacks cause such a commotion that they are often mistaken for a crocodile attack.

Hibernation of the African side-necked turtle

African side-necked turtles often bask at the water’s edge. However, during the rainy season, they will normally leave the water and set out on long journeys overland.

During the dry season, as the water bodies gradually dry up, the turtle digs into the ground and buries itself until the rains return. It is known to spend months and even years in this state of hibernation. The turtle also hibernates during extremely cold weather. 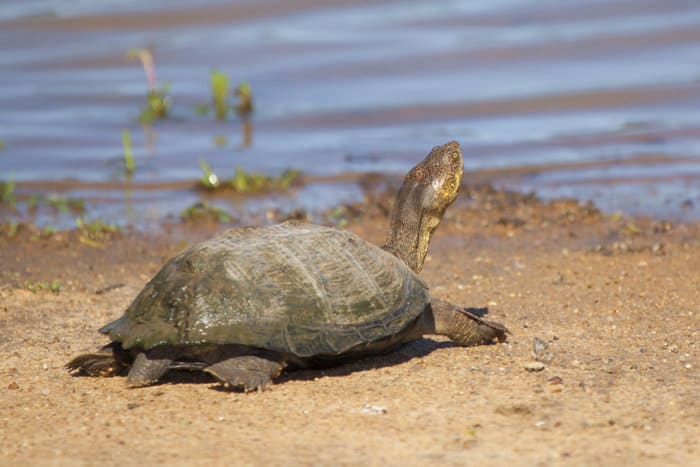 African side-necked turtles are wild animals by design, and are therefore not suitable as domestic pets. They were created to roam free in the wild. Just like a human being held prisoner for life, a wild animal kept in captivity lives a miserable existence.

Moreover, like all reptiles, turtles are cold-blooded and need heat from the African sun to thrive. They are simply not adapted for the cold winters of the northern hemisphere.

There are 18 species within the family of the African side-necked turtle, two of which are listed as vulnerable. As such, keeping them as pets threatens the survival of endangered turtle species.

Who wouldn’t want to see that friendly, adorable face and winning smile of the African side-necked turtle? But rather than taking one as a pet, plan a trip to Africa to see them roam free in their natural environment. It will be worth it! 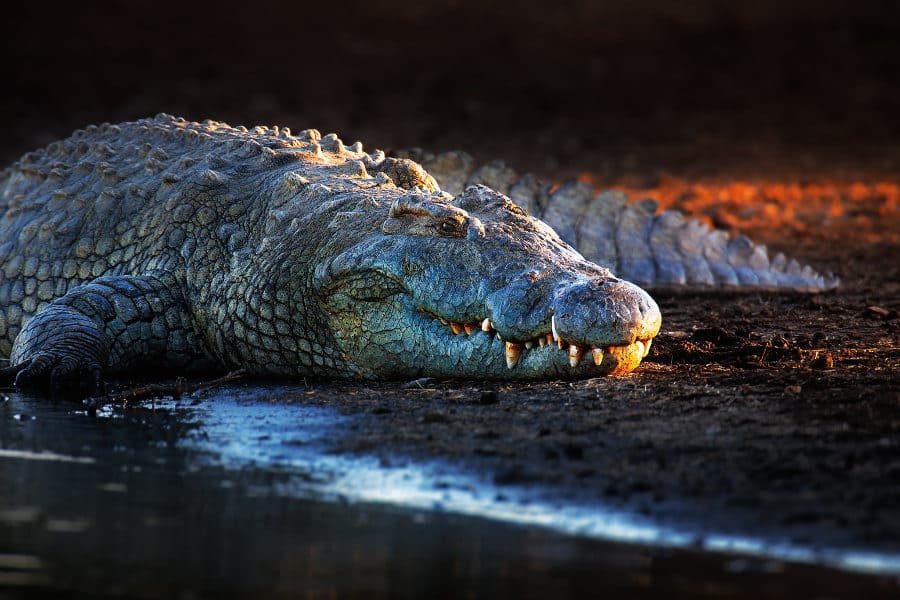