Africa is the undeniable epicentre of our planet, the place where the human species originated.

As a collection of countries, as well as a space of great spirituality, the African continent and the creatures that call it home have attracted more than their fair share of comments and quotes.

In this article, we devote a little time and consideration to the most creative and evocative wildlife quotes from over the years.

A Message From Mandela 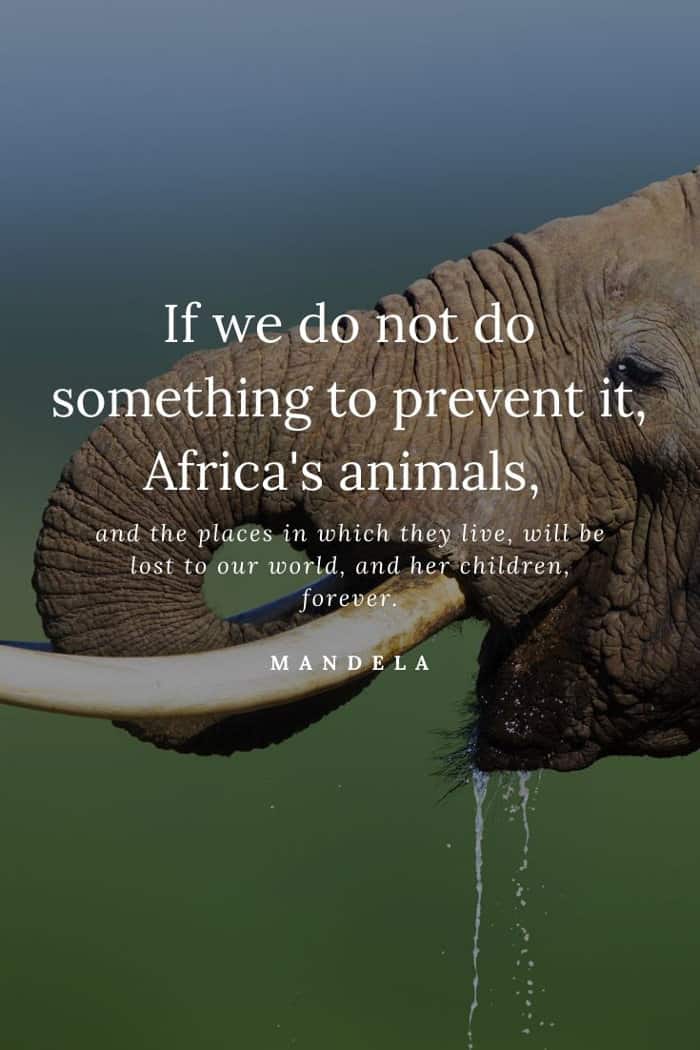 Who better to start with when we imagine Africa’s most masterful modern-day icons than the man known to his people as ‘Madiba’.

When expressing his pulsating passion for the Peace Parks Foundation of South Africa, Nelson Mandela warned:

“If we do not do something to prevent it, Africa’s animals, and the places in which they live, will be lost to our world, and her children, forever.”

This grave message hit home with a lot of fellow South Africans and made Africa as a whole realise how alarming the situation to conserve its unrivalled beauty had become.

Historical Heroes in Awe of Africa

Although not a fresh phenomenon, Africa’s unbounded beauty has been wowing all that tread on its sacred land for centuries. Here’s what some of the more well-known wildlife wanderers had to say… 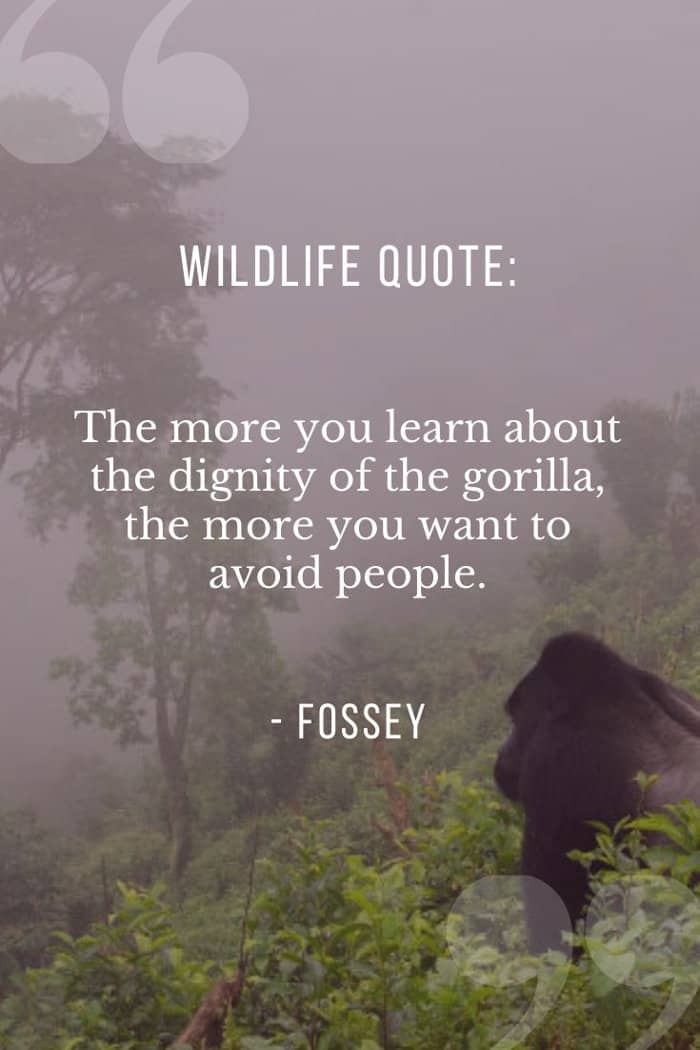 Thought to be eccentric, yet undeniably courageous and compassionate, Dian Fossey was a conservationist who gave everything she had, including her life, for her love of the magnificent mountain gorillas of Africa.

The following quote goes some way to explaining why a human might value the members of another species more highly and risk it all to protect them.

“The more you learn about the dignity of the gorilla, the more you want to avoid people.”

Brutally murdered in an unsolved case of pure barbarism, her words, sadly, seem to have rung truer than anybody could have foreseen.

Another empathetic expert who strongly sided with the ‘beast’ against the ‘human being’ was Cynthia Nolan. In a very famous quote she concluded that:

“Some people…find they need animals to look at and to learn from. They have discovered that men, not beasts, are uncivilised.”

She believed that, as living things which had always adhered to nature, the animals of Africa were far more deserving of respect and reverence. We, however, had not been content with our place in the animal kingdom and had done untold damage to the natural order of things. 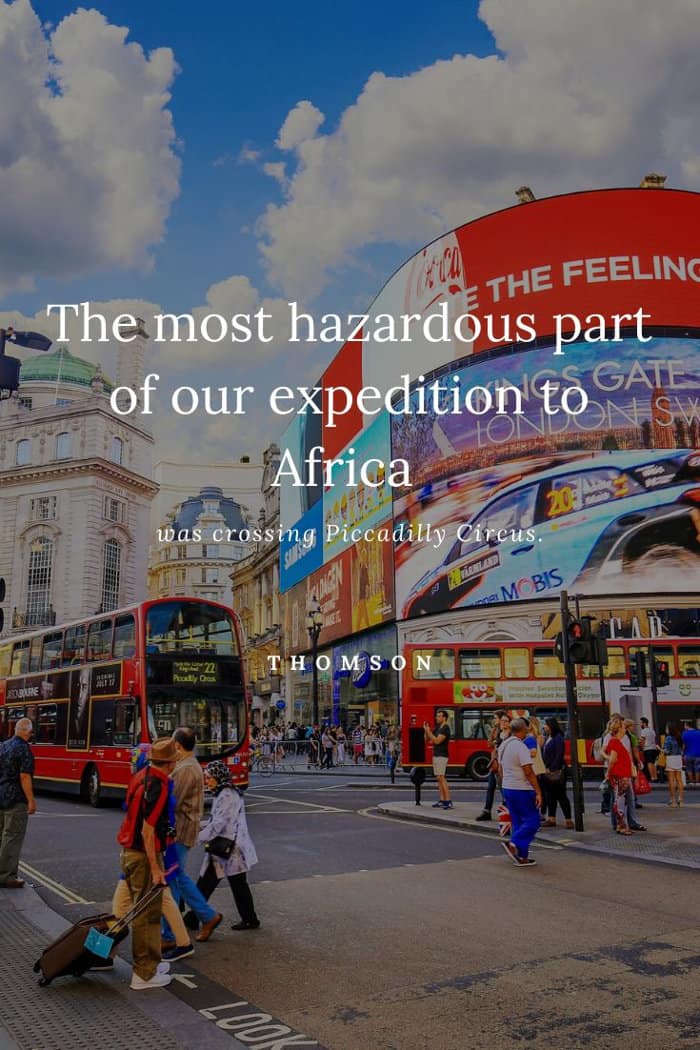 A Scottish explorer, Joseph Thomson is credited with the couriering of much African knowledge from the far reaches of Kenya and Uganda to the so-called civilizations of the western world.

He debunked theories of Africa as a dangerous and, at times, deadly place, stating that:

“The most hazardous part of our expedition to Africa was crossing Piccadilly Circus.”

The fact that one of the senior members of the expedition actually died of malaria on the expedition (Alexander Keith Johnston), may contribute significant contradiction to Thomson’s attestations of Africa’s safety. Though, it’s thought that he was referring to the wildlife, rather than sickness or disease.

A Danish writer whose work revolved predominantly around African wildlife and safari – Karen Blixen – proffered plainly and without pretence:

“If there were one more thing I could do, it would be to go on safari once again.”

Her unrelenting love for Africa was evidenced in her decision to stay and settle in the now named country of Kenya. She unobtrusively observed her surroundings with paper and quill in the very spot that made her spirit soar.

Blixen’s writing received the recognition it deserved when used as the loose base for a world-famous book and movie – ‘Out of Africa’.

From writers to actors, sportsmen to singers, Africa’s animal kingdom has found itself worthy of complimentary comments on more than one occasion… 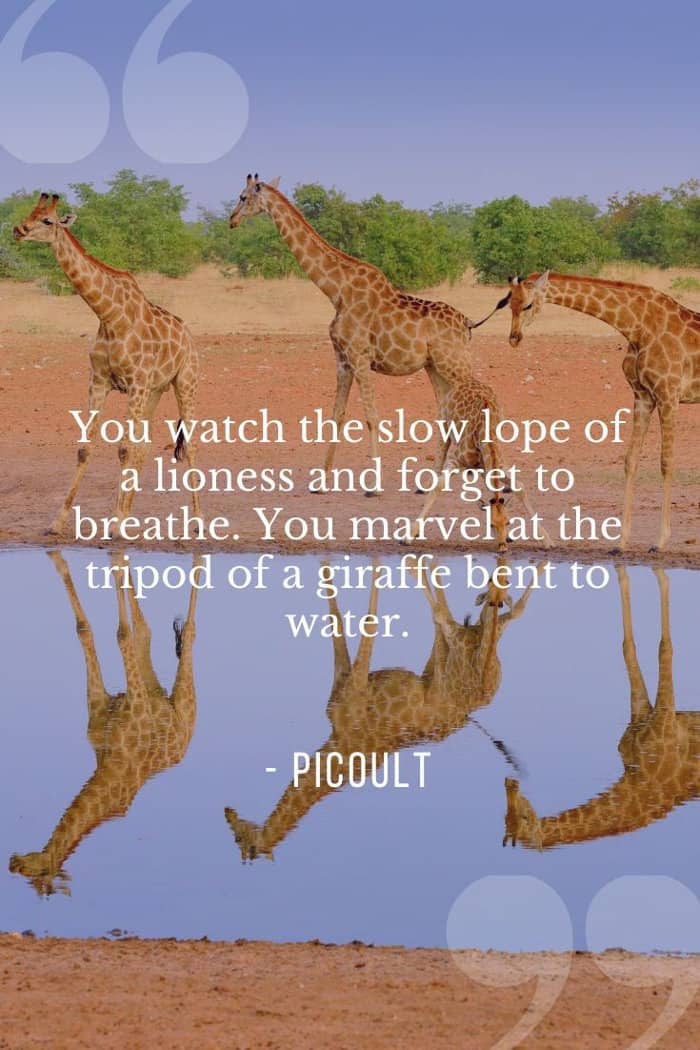 A writer of great repute who has sold millions of copies of her work – Jodi Picoult – felt compelled to comment upon her many visits and safaris in Africa.

Painting a picture of a wonderful world in which nature’s most normal actions become miraculous and memorable, Picoult points to the marvel of mere biomechanics when suggesting that:

“You watch the slow lope of a lioness and forget to breathe. You marvel at the tripod of a giraffe bent to water.”

She perceives the view of such movements of simplicity when seen in a surrounding of stillness and seclusion, as giving oneself a spiritual sense of what it is to be alive.

An actor of epic proportions who needs no introduction, unless you’ve been living on Pluto or some other faraway planet is Leonardo DiCaprio.

Having posed in a Hollywood blockbuster in which he played a diamond smuggler from Zimbabwe, Leonardo said of his time in and amongst his animal cousins:

“I saw a pack of 35 lions eat a wildebeest carcass and swam with giant manta rays. That was unbelievable. Africa’s natural beauty is unmatched.”

This is certainly high praise from a man who has purportedly taken a personal interest in the numerous environmental issues facing the Earth. 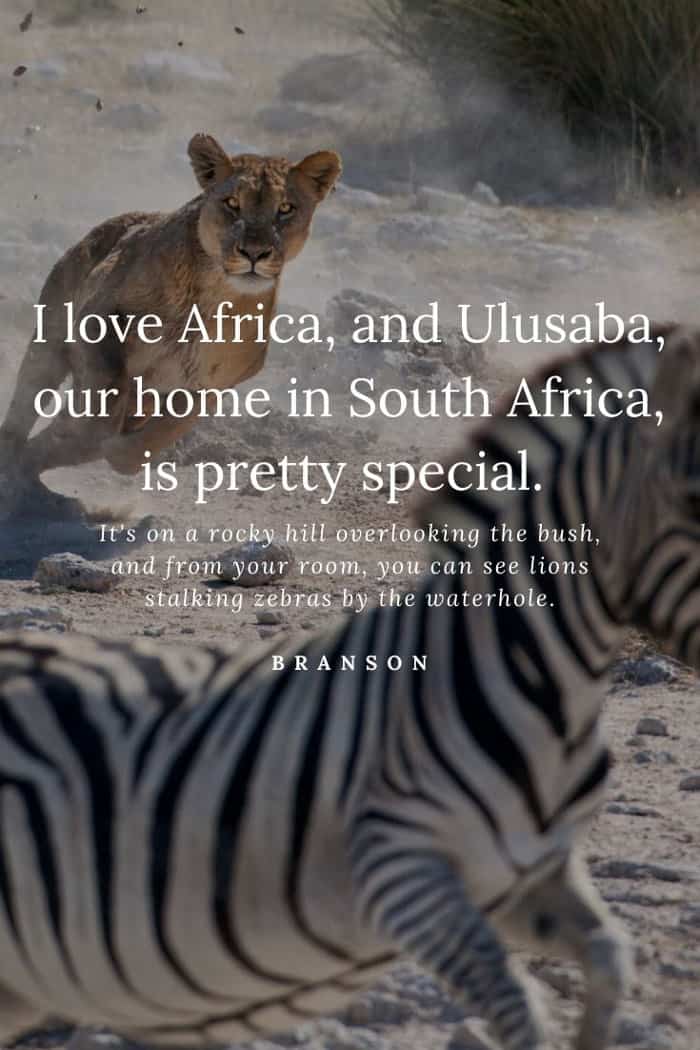 Another man whose fame and fortune have placed him in the top 1% of the world’s richest people is Richard Branson.

Whether by plane, train or hot air balloon, it’s safe to say that this silver-haired symbol of success is no stranger to worldwide adventure.

Even Branson struggles to evoke examples of greater amazement from his constant travels than being a party to an uninterrupted hunt, saying:

“I love Africa, and Ulusaba, our home in South Africa, is pretty special. It’s on a rocky hill overlooking the bush, and from your room, you can see lions stalking zebras by the waterhole.”

Boyd Norton goes beyond what others have quipped and quoted, believing the sounds and secretions of Africa’s diverse collection of creatures to be forms of communication as clear and concise as our own. We saved the biggest and best quote until last with:

“There is language going on out there- the language of the wild. Roars, snorts, trumpets, squeals, whoops, and chirps all have meaning derived over eons of expression… We have yet to become fluent in the language -and music- of the wild.”

As a nature photographer who has spent hours lying motionless like a sniper, simply surveying the daily lives of Africa’s animated animals, Norton is more qualified than most to speak of all things wild in Africa.

Take Yourself on Safari 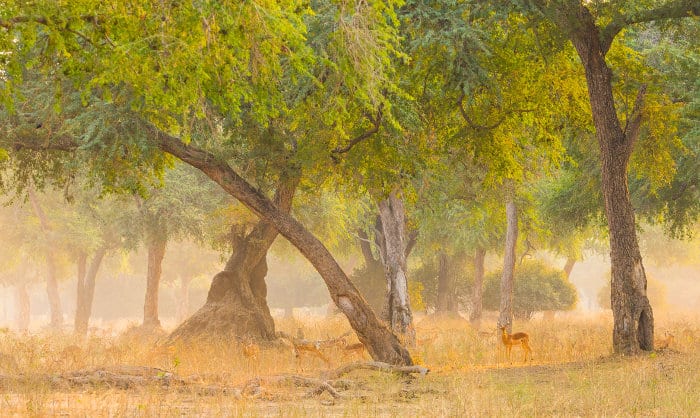 Have any of these quotes whet your appetite for Africa’s wonderful wildlife?

Don’t take anybody else’s word for it.

Whether it’s a plan to join the herds on the plains or a hike through the mountainous forests to meet the monkeys, make your next trip an African journey of eye-opening discovery.

‘Mr. Wildlife’, himself, Sir David Attenborough said it best when lobbying for the protection of Africa’s endangered primates through education and experience –

Hungry for more? Here’s our personal list of 77 famous safari quotes to inspire you about Africa. 😉 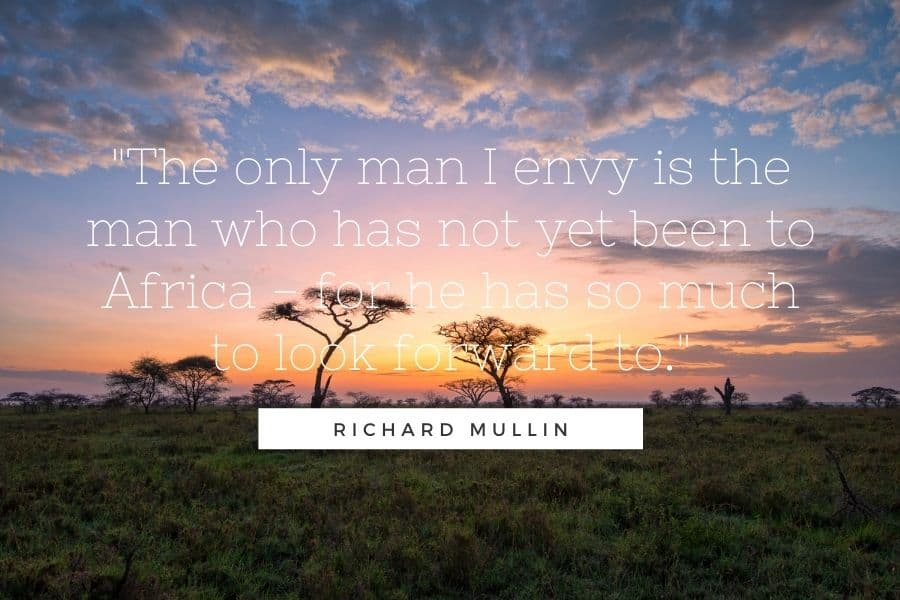