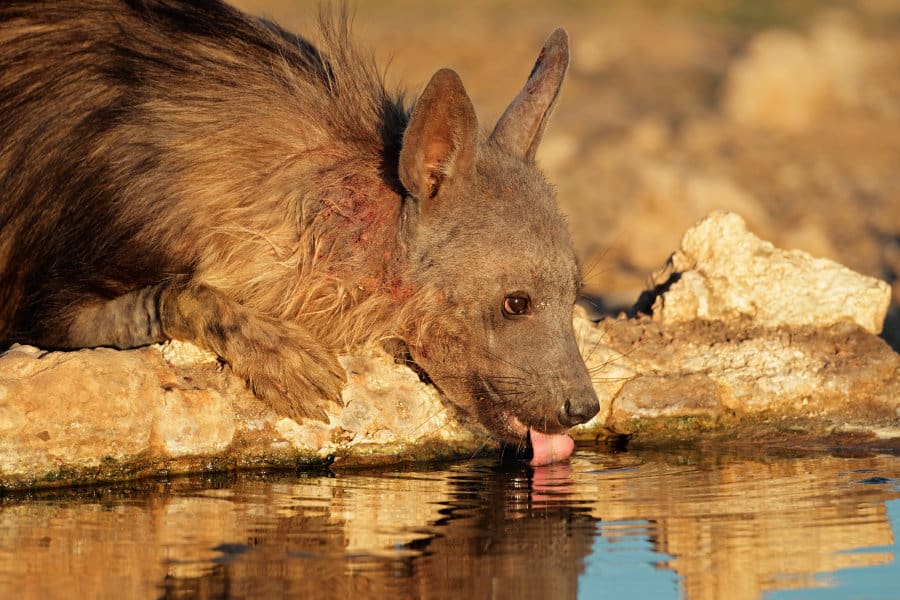 The brown hyena is the rarest hyena out of the four species. It is commonly mistaken for the African wild dog because of its long, shaggy coat, stripey legs, and white markings. However, these animals are more closely related to mongooses than canines.

They are versatile animals that inhabit a variety of habitats. Their range stretches through Namibia, Botswana, western and southern Zimbabwe, southern Mozambique and South Africa.

The brown hyena’s behavior differs from the common spotted hyena, and the clan structures are complex, with an interesting hierarchy. Spotting these hyenas in the wild is no easy feat, which makes them all the more mysterious and fascinating.

Take a look at these awesome facts about the unusual ‘strandwolf’, and learn everything you need to know about such marvelous animals. 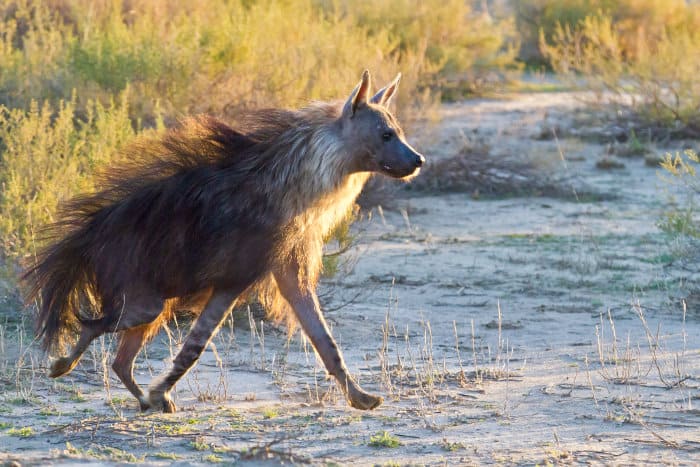 The long-haired hyena is one of four hyena species and is the second-largest behind the spotted hyena. Their body size ranges between 1.3 meters and 1.6 meters long, and weighs 34 to 72 kilograms. They aren’t very tall animals, with their weirdly-shaped bodies reaching a shoulder height of around 80 cm.

Unlike other hyena species, the brown hyena does not have much of a size difference between sexes. Females and males are similar in size, although there are cases where the males are slightly larger.

Hyenas are notorious scavengers of the African plains, with the nerve to steal lion kills and act as a vacuum cleaner for carcasses. While brown hyenas are primarily carnivores, they sometimes have to branch out to meals of ostrich eggs and desert melons. Scavengers can’t be choosers.

Much like the marabou stork, their taste for carrion places them as a kind of clean-up crew in the ecosystem. This is an understated yet essential job.

Although they are famous for feasting on leftovers, these hyenas are pretty adept hunters. They can catch small mammals, birds, and insects, and occasionally even fish. Talk about a balanced diet.

3. The Brown Hyena Habitat is Diverse 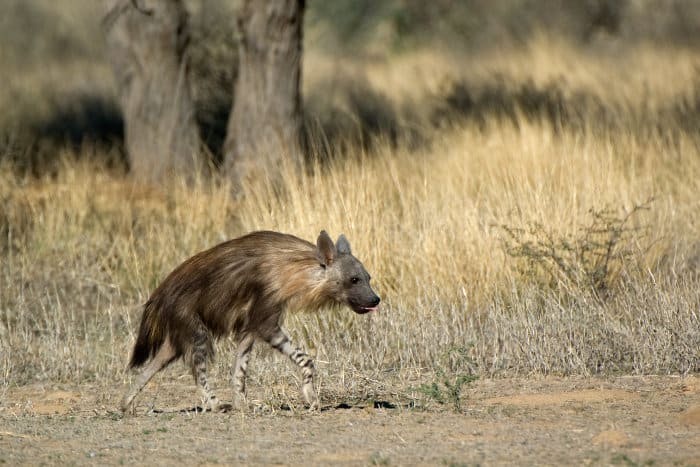 These hyenas are adaptable and widespread, covering a range of widely different habitats. They commonly inhabit the arid regions of the Kalahari and Namib deserts. Yet, they also inhabit beaches, savannas, and even the edge of residential areas.

It is not uncommon to see brown hyenas in rocky mountainous areas and woodlands. They are incredibly versatile and resourceful creatures who can survive in most environments.

You may come across one of these elusive hyenas on the outskirts of South Africa’s capital city, Pretoria, or Magaliesberg.

4. They Are Aggressive and Confrontational

Brown Hyenas are aggressive and have no qualms about challenging lions and leopards for their food.

Their territory and food sources overlap with big cats, and a fierce long-standing rivalry exists between the animals. In a fight, the winner walks away fed, and these hyenas are worthwhile opponents.

Their battle stance includes raising their long manes and neck fluff in an attempt to come across as larger and more intimidating. These physical features get damaged in a fight, and it’s not uncommon to see a hyena’s scruff looking the worse for wear – torn and damaged. 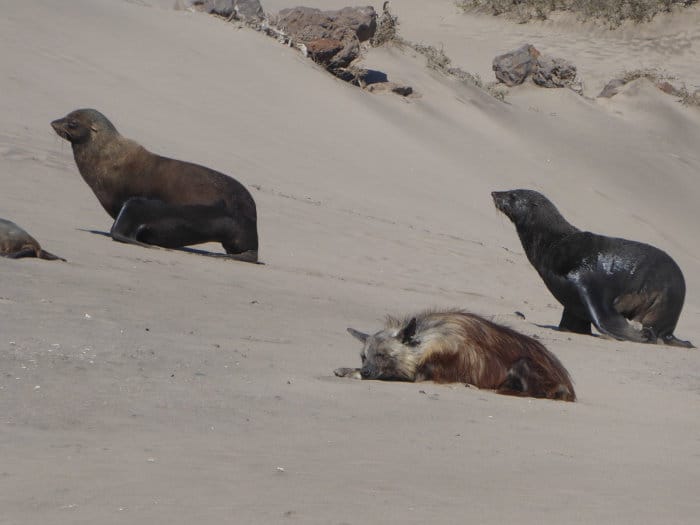 The habitat of the brown hyena is diverse and includes the dramatic Skeleton Coast in Namibia. The shaggy hyenas have earned the Afrikaans name ‘strandwolf,’ which translates to ‘beach dog‘ because of its coastal habitat.

The habits of these beach-dwelling hyenas differ from their inland counterparts. They live amongst seals and hunt small coastal prey and seal pups. The competition for territory is not as prevalent here as big cats don’t frequent the beaches of Namibia.

Africa is full of majestic, elegant, and beautiful creatures. Unfortunately, hyenas are not considered as such. Notoriously known as one of Africa’s ugly five animals, their ungainly appearance does nothing for their bad reputation.

The brown hyena, with its long hair and scruffy appearance, looks different from other hyenas. Alas, they’re still a sight for sore eyes.

Sporting pointed ears, an almost disproportionately large head, and the quintessential sloping hindquarters all packaged in an untidy coat. They are anything but graceful. 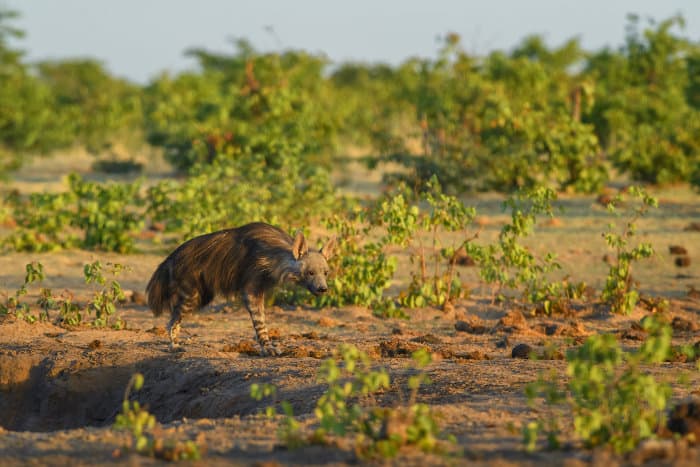 Hyenas are territorial animals, frequently dueling big cats and other hyenas for ownership over an area.

These paste-like blobs contain a lot of information about the hyena that dispelled it. It reveals the secreter’s identity as well as when it last passed by the area. This allows hyenas to keep track of each other, and the territorial borders.

Look out for these white blobs on grass the next time you’re on safari.

Devouring carcasses is no easy feat, and most animals are simply not constructed with the tools needed to do it. Brown hyenas are born scavengers, and their strong jaws are an effective scavenging tool.

Brown hyenas have mighty jaws and larger skulls compared to their cousins. They have the ability to grind through the hardest bones.

A group of hyenas can devour an entire zebra, including its bones, in under half an hour – a scary and impressive ability. 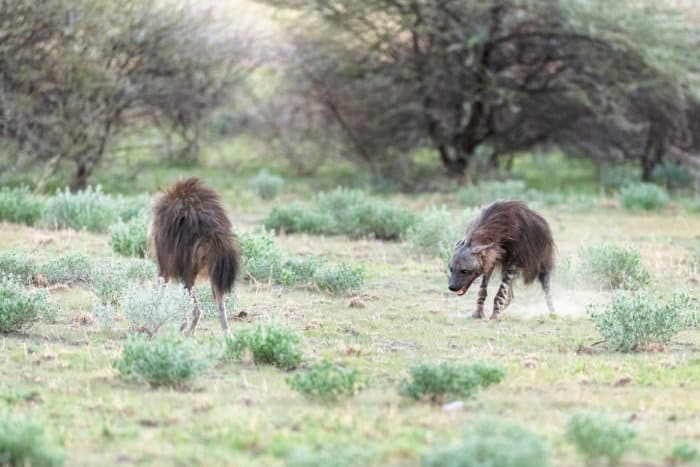 Brown hyenas are not as social as the other three hyena species. They usually live and travel alone. However, when they do join up into clans, there are between 4 to 15 mixed-sex members.

The hierarchy is quite complex, and aggressive rituals dominate relationships. These clans are incredibly territorial, covering an area of between 200 to 500 square kilometers. Adults use their paste secretions to mark this territory.

These hyenas don’t have a breeding season, and even within clans the breeding is very unsynchronized. This means that there are members of all ages in a clan.

Females prefer to mate with nomadic males rather than members of their group, and this often results in brutal fights.

It is a very female-dominated group hierarchy, with males having the lowest rank. Young males get booted out of their natal clan when they reach sexual maturity and have to fight their way into a new group.

10. Is the Brown Hyena Endangered?

The brown hyena is the rarest species of hyena. They aren’t endangered, however their classification is ‘near-threatened’. This means that it does not qualify as endangered presently, but is likely to qualify in the near future.

The International Union for Conservation of Nature estimates the global population to be between 4000 and 10 000.

The biggest threat to the brown hyena population is humans. Many farmers kill these animals based on the belief that they are a threat to livestock.

There are some cases that note the body parts of the hyena occasionally used in traditional medicine. Although they are not as prized for healing as the spotted hyena. 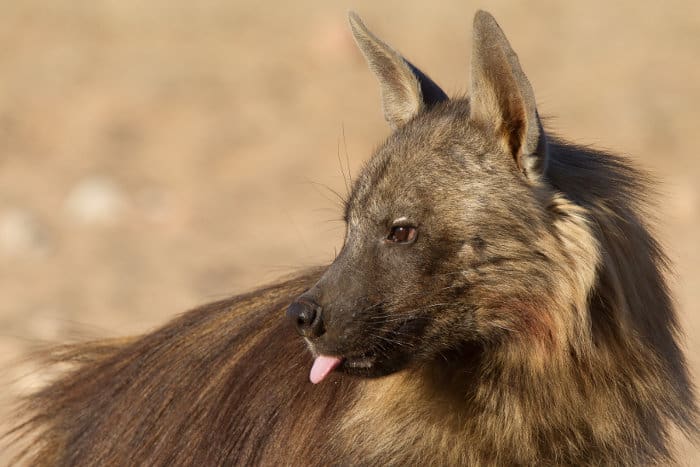 Not only does the brown hyena’s unsightly appearance decrease its popularity, but it also gives them a reputation for being unintelligent.

However, this is an unfair assumption based on the giggling goons of Disney movies. In reality, hyenas are very intelligent animals and one of the most socially sophisticated mammals in the world.

They have a large frontal cortex and have displayed more advanced problem-solving capabilities and social skills than chimpanzees.

12. The Fight for Food From the Beginning

Hyenas learn to battle for food from birth. The female brown hyena only has two nipples, so cubs must compete for food, which often has dire consequences for the babies. The female births between 1 and 5 cubs, and the bigger the litter, the more brutal the competition.

In litters of more than two, the weaker cubs struggle to survive and often die of starvation. Around 60% of hyena cubs die before reaching adulthood. This can be from starvation or because territorial males or lions kill them. 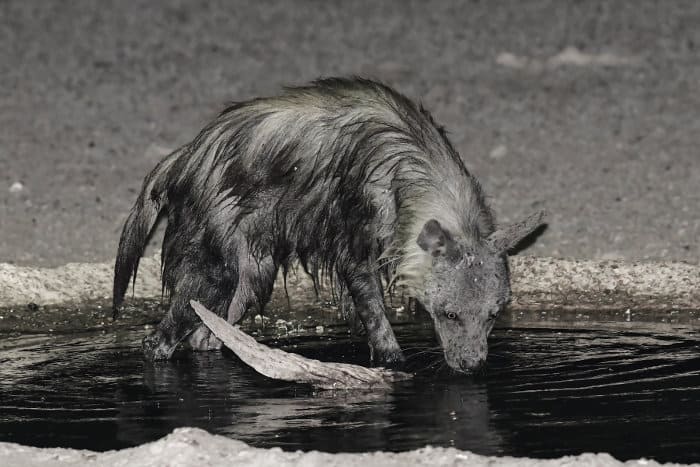 Unlike the spotted hyena, which is often referred to as the ‘giggling hyena’, brown hyenas are much quieter. However, they are most active during the night and this is when they use vocalizations to communicate.

Brown hyenas use a variety of sounds to communicate including grunts, growls, and an eerie cackle.

Getting to Know the Long-Haired Hyena

The brown hyena flies under many people’s radars. With dwindling population numbers and elusive nocturnal habits, these interesting creatures live in the shadows of their famous relatives.

They deserve more recognition, and as you learn about them, you’ll surely agree.

The fact that brown hyenas are seldom spotted, makes it even more exciting when you do see one. Grab your binoculars, book a safari, and go in search of these shaggy-coated hyenas. 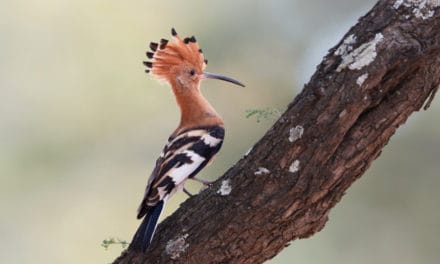 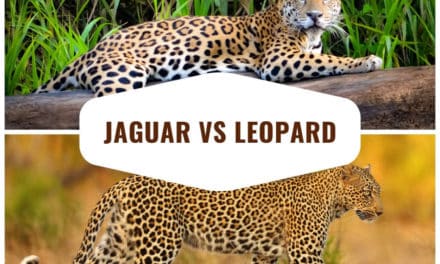