According to African legend, God ran out of animal parts while producing the creatures of Africa. So, God decided to use all the leftover bird parts to create the unsightly marabou stork.

The marabou’s sickly appearance and unbecoming habits have earned it names such as the undertaker bird, and the nightmare bird.

Widely distributed throughout Sub-Saharan Africa, marabous have a large range. They are not fussy about their habitats. Inhabiting diverse landscapes from dry savannas to swamps and lakeshores.

The African storks may be one of the ugliest animals in Africa, but they are fascinating creatures and crucial to the environment.

1. How the Undertaker Bird Got its Name 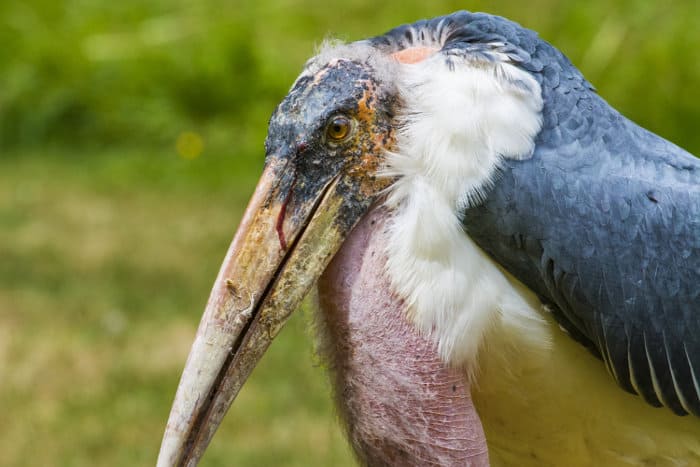 There is no sugarcoating it. These African storks are an eye-sore, with their scabby pink faces, featherless heads, and bulbous throat sac. Even their white legs are such a shade because they’re known for excreting all over themselves.

All of these unattractive features have boosted the stork into the unfortunate first place as the ugliest bird.

Some equate the marabou’s attraction to dead bodies with that of an undertaker. However, the colors of the bird’s feathers and its shape from behind are a more literal reason for its creepy name.

The dark plumage which contrasts with the white feathers on the underside of its body looks like a cloak draped over the marabou bird. The sheer size of the bird and its cloak-like feathers are eerily similar to the image of a grim reaper.

2. Leftovers on the Menu for the African Stork

Their diet consists mostly of carrion (decaying flesh), fish, termites, locusts, frogs, lizards, baby crocodiles, snakes, rats, mice, and birds. They kill, steal, and scavenge to find the 1.6lbs of food that they require per day.

Dead or alive makes no difference to the storks. In fact, even inanimate objects are acceptable. The birds steal eggs from nests, devour the remains of carcasses, and gobble up human trash from dumps.

It doesn’t stop there. The marabous will eat other birds too – particularly baby flamingos. But won’t say no to pigeons, doves, and queleas.

And gobble they do. The storks can swallow an astounding 2lbs of meat in a single swallow! 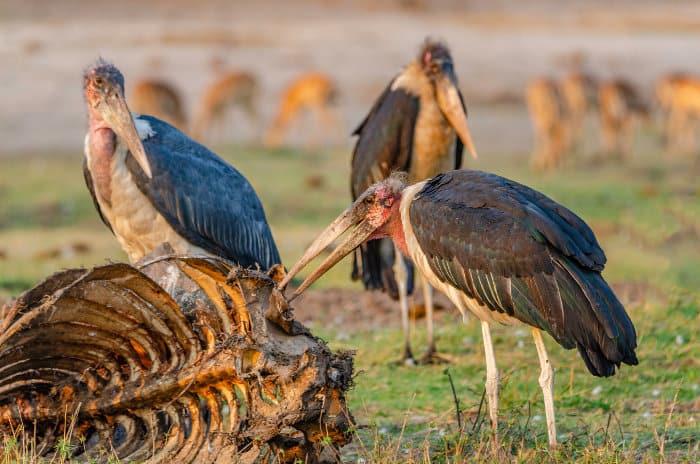 Before you write off the marabou stork as a nightmare bird, it’s important to understand the critical part that it plays in ecology and conservation.

Feeding on carrion and scraps seems like a horrific trait but this dietary inclination for dead matter helps the ecosystem in a number of ways. The storks speed up the decomposition process by breaking through thick animal hides with their strong beaks. This also allows weaker scavengers to make a meal out of the carcass.

In addition, clearing away the dead and decaying matter is crucial for preventing the spread of pathogens. If the stork didn’t act as a garbage collector of rotting carcasses, bacteria and disease would fester in the scraps.

The marabou stork is one of the largest flying birds and certainly the largest flying stork. With an impressive wingspan between 7 to 9 feet. The bird may not be colorful and vibrant with a beautiful song. But it is an elegant sight when it takes flight.

In typical stork style, the marabou’s long legs trail behind in flight. However, unlike other storks, the marabou keeps its neck tucked and bent so that the shoulders support the weight of the beak.

Due to its massive size, the marabou stork has a special physiological adaption which makes it possible to fly. They have hollow leg and toe bones. This is essential for flight as the bird is not very heavy.

They can fly up to heights of an impressive 13 000 feet. However, they usually stick low to the ground as their main function for flying is to seek out a meal to scavenge.

5. They’re Ugly for a Reason 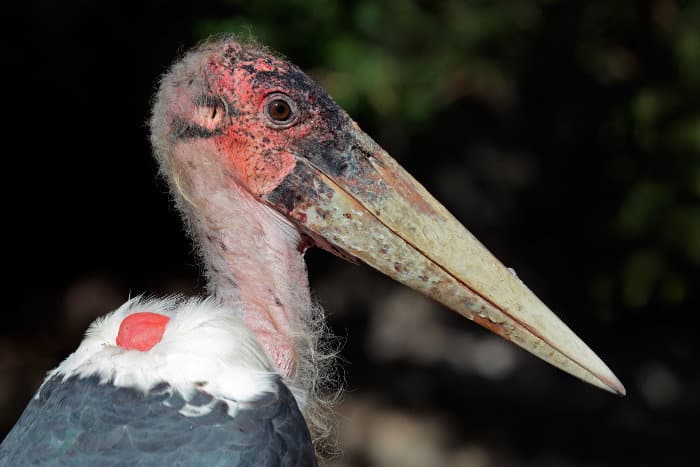 Marabou storks may be a bit of an eye-sore, but even their ugliness has a function. All of which contribute to the fascinating role of the stork in the African ecosystem.

The 18-inch gular sac is a distinctive, and a rather unattractive feature of the marabou stork. It is not used for food storage but is most noticeable during the breeding season. The stork uses the pouch to show dominance.

The sac connects to the left nostril and works to resonate a guttural croaking sound. The pouch also aids in thermoregulation, helping to maintain body temperature.

The bald, scabby head of the stork is not due to the misfortune of God creating it with ‘leftover bird parts’. The lack of feathers and fluff on its head is extremely important in preventing infections.

The marabou sticks its head into rotting carcasses which are ripe with bacteria. Its bald head, while unsightly, is essential for keeping the marabou clean and disease-free.

African storks have stark white legs, which is not its natural complexion. In fact, their legs are white from defecating on themselves. This is not just a gross habit, but a scientific process called urohidrosis practiced by many birds.

The birds do this as a method to keep cool in the hot African climates. The liquid feces activates evaporative cooling and assists the regulation of internal body temperature.

The storks have other temperature regulating tricks too. They pant in order to lower body temperature. And if they need to heat up, they spread their massive wings to absorb the sunny rays. 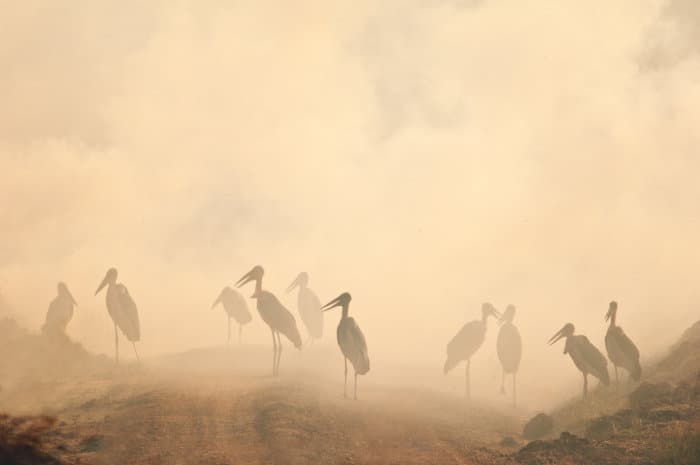 The fascinating undertaker birds have a number of unusual habits. While most animals flee from fires, the marabou stork turns it into a feeding opportunity. They rush towards fires, marching just in front of the flames to snatch up fleeing animals.

And when they’re not facing fires or scavenging food, the storks stand around all day. Unlike some other bird species, they are not curious or playful by nature. Conserving energy is of utmost importance, and they use their downtime to do just that.

However, standing around isn’t a display of complete laziness. The marabous use this time to sun themselves with spread wings. And after a large meal, they will rest on their rear tarsi bones to aid digestion.

The marabou stork will follow vultures to new scavenging spots and will often finish off the vultures’ leftovers. Look out for this scavenging pair on your next African bird safari.

8. The Marabou Stork and Bee Relationship

Marabou birds are friends of the ecosystem in more than one way. They share a commensalism relationship with bees. This is a harmonious relationship by which one animal benefits and the other animal is not harmed by providing the benefits.

The marabou stork and bee relationship is beautiful in its simplicity and effectiveness. The stork thrives off a meat diet and feeds its needs primarily off dead carcasses. It uses its strong bill to rip apart and eat the carcass.

The bees use the leftover skeleton and scraps as food and shelter within which to lay their eggs. Without the help of the stork, the bees would rarely happen upon carcasses suitable for this function. 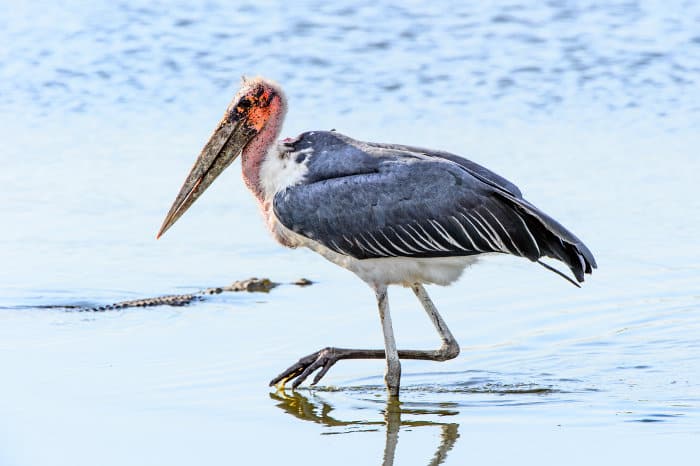 It is a common belief that the marabou stork got its name from an Arabic word for quiet. It is a relatively silent bird and does not sweetly sing, nor does it have unique calls. In fact, they don’t even have voice boxes.

The clacks and croaks, and every other sound that the giant stork makes, is a result of vibrations in their noses and gular sacs. Or by clapping its bills together. The most common noise is something known as bill-rattling. The marabou bangs its gular sac against its body to create a loud noise.

The storks are vocal only during courtship or when they feel threatened. The gular sac is a resonator that produces a loud cracking sound during social displays. On the other hand, the bill-clapping is most conspicuous when the stork feels threatened.

Being the unusual animal it is, there are reports of storks making many strange sounds to display dominance or defense. These sounds range from whines to whistles, and even hiccups.

After all the talk of scavenging carrion and excreting on itself, it’ll be hard to believe that the marabou feathers have a stake in fashion. Hats and shoes since the 18th-century have trimmings and adornments made with marabou down feathers.

Even Marilyn Monroe dons marabou-trimmed heels in the romantic film The Seven Year Itch. That image is certainly a far cry from the Undertaker Bird.

More Than Just a Nightmare Bird 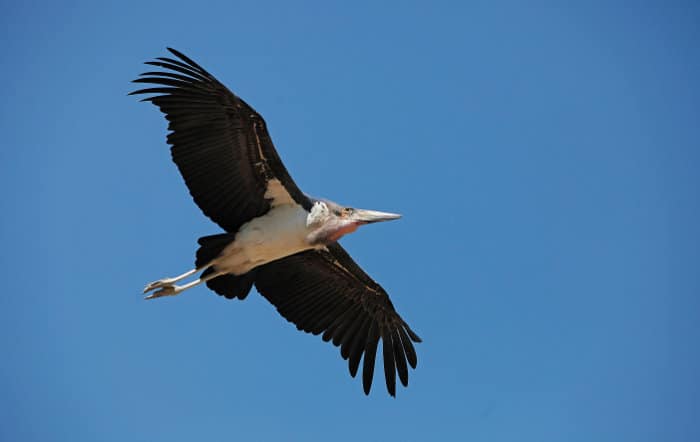 The marabou stork has a hard time trying to win over admirers with its awkward and ugly appearance. But there is so much more to the bird than what meets the eye.

The largest flying stork is a graceful flier, its body perfectly adapted to reaching great heights. It is a smart scavenger, creating advantageous and harmonious relationships with other birds and insects.

Most importantly, the marabou stork plays a crucial role in the ecology and conservation of its African habitat. By simply seeking out carrion to devour, the stork prevents the spread of pathogens.

Before you write off the giant African stork, book a safari to see them in action. 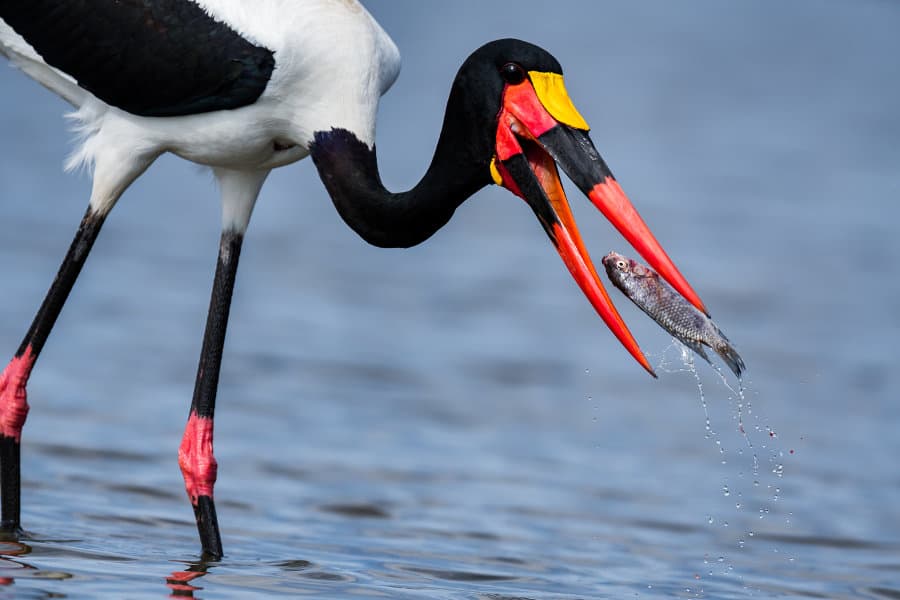 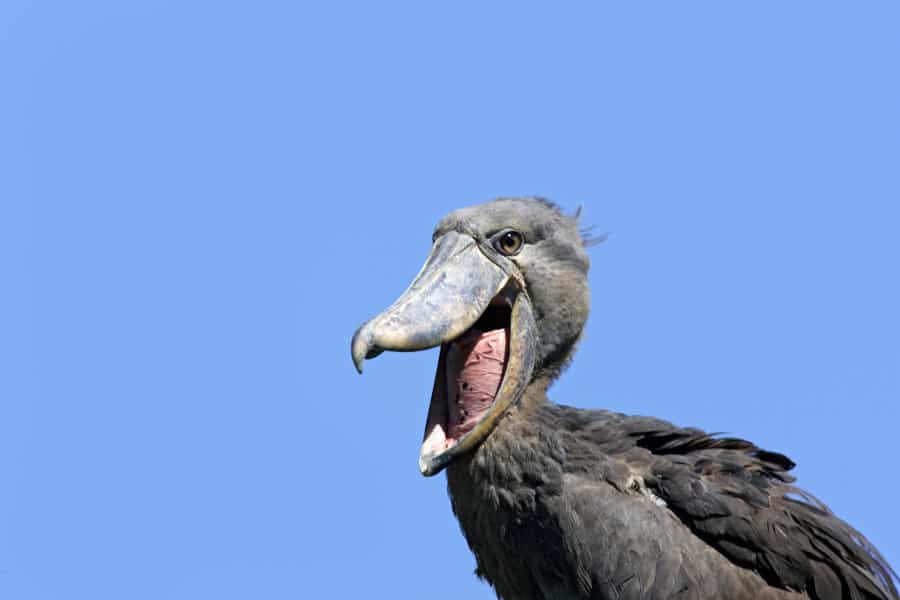