Crocodiles don’t appear to be made for running. But with their peculiar reptile limbs and prehistoric bodies, crocodiles can still run faster than most people at 17 km/h. And they can swim at up to 20 km/h.

That’s just the start of the story. Read on for the complete tale on how fast can a crocodile run.

Here is everything you need to know about the speed and agility of a crocodile moving on land and in water.

How Fast Does a Crocodile Run?

The average crocodile runs at 12 km/h on their bellies, when around swamps and muddy banks.

Some crocs have been measured exceeding 17 km/h when they run on land. But you’ll be relieved to know however, that they can only run at these speeds for short distances.

Certain sources quote that crocodiles can reach a maximum of 35 km/h (22 mph)! That’s a bit of a myth and no crocodile has ever been scientifically measured at such an insane speed.

Yet, like any true measurement you have to keep in mind the running conditions, such as where the crocodile is, what type of crocodile you are encountering and its motive for running.

Can a Human Outrun a Crocodile? 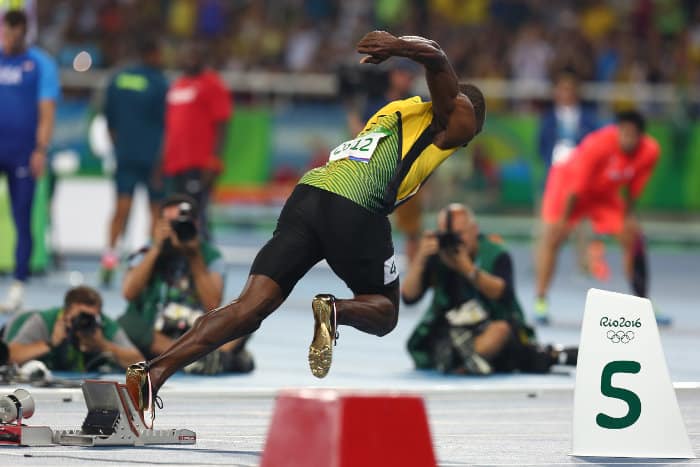 This is a very good question. The short answer is maybe. Crocodiles will rarely attempt to chase a human on dry land. Crocodiles’ speed and agility is mostly dependent on their tail and body and thus works best in the water.

Some humans, like Usain Bolt, can run up to a maximum of 45 km/h. In theory, humans should be able to outrun a hungry crocodile, but how fast can you actually run?

Several beings will struggle to reach a land speed of even 12 km/h, never mind the 17 km/h possible by Nile crocodiles.

To win a race versus a crocodile it will help to have a head start. Or at least to run with somebody who is slower than you. After all, you don’t need to outrun the crocodile if the crocodile catches somebody else first.

Are crocodiles looking at humans as food?

Any warm body is a potential food source for crocodiles. Crocodiles are not fussy eaters and will eat anything from fish to mammals to birds.

If you are the next meal, it is not the norm for crocodiles to chase their prey around.

They usually like to surprise their potential food source by lunging and getting hold of their prey in one sweeping movement.

Their mouths are very strong and powerful, thus making it difficult to get out of, so you do not want to be caught and surprised by them.

Staying away from a hungry crocodile is your best option because you may not even get a chance to run. 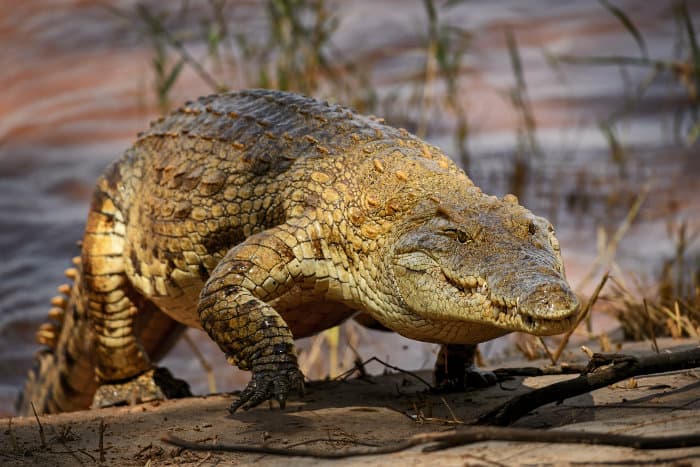 When we think of crocodiles we see a large belly and an impressive jaw with sharp, crooked teeth.

Their skin and demeanour reminds us of dinosaurs that are slow and sluggish.

Yet, crocodiles are not sluggish when they are hungry as they move quickly when needed.

Crocodiles do not have great stamina and because they are so big and bulky, they do not excel at continuous and prolonged exercise. When you see a crocodile running it is probably running away from another predator or threat.

Crocodiles are territorial and have rather complex social structures, something that is very unusual for reptiles. They tend to hunt and raise hatchlings together.

To protect their territory and nests, both the male and female crocodile will chase you until you are at a good distance away from what they are protecting.

There are certain hierarchies within the group that are maintained through vocal grunts and gestures, touch and body language.

Hey, what is a group of crocodiles called?

So you can decide whether to call it a congregation, nest, bask or float. Learn more about the collective nouns for African animals here.

Some Crocodiles Run at Different Speeds

There are many different species of crocodiles in the world and they fall into two categories; saltwater and freshwater crocodiles. Most crocodiles in Africa are Nile crocodiles and inhabit fresh water.

The saltwater and Nile crocodile are the two known to cause most human fatalities.

Nile crocodiles and saltwater crocodiles are also the fastest of the species, those capable of reaching top speeds of up to 17 km/h.

All crocodiles can only run at top speed for short distances, usually only 30-40 metres at a time.

Why is it that a Crocodile Can Run So Fast? 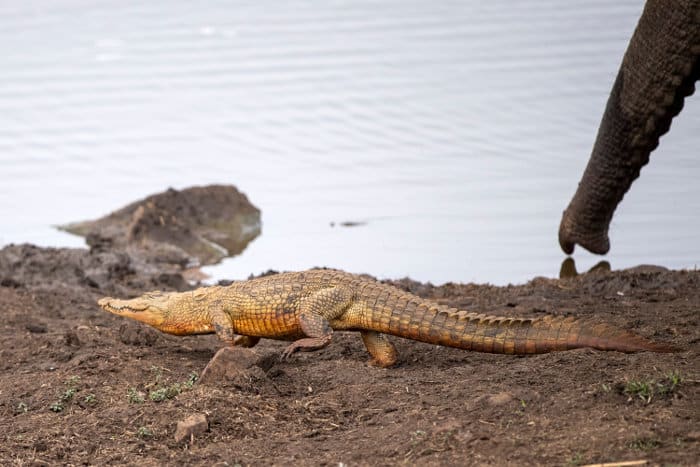 Crocodiles look slow, but they use their size and force to propel them forward. There are two ways that the crocodiles get around on land while running.

The first method is a kind of gallop on firm ground. They use their hind and front legs as synchronized pairs. They launch themselves off the ground with their hind legs and then land on their front legs.

When they land they curve their body so their hind legs fall almost in line with the front pair. Then the action is repeated. 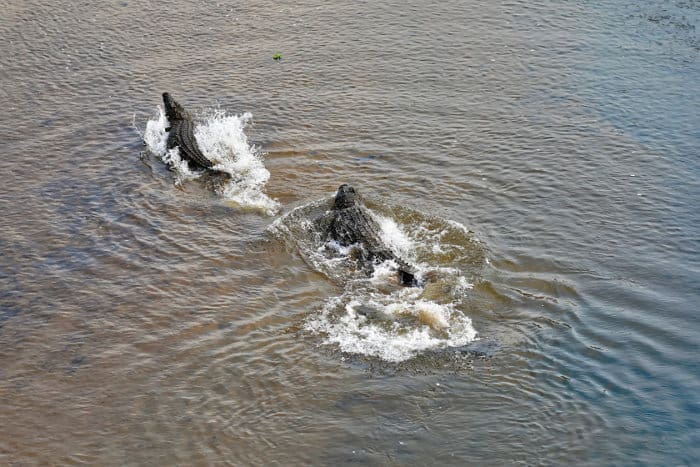 It is a very effective and a similar way to how a rabbit runs. Not all the crocodile species (but mostly the smaller species) run like this on solid ground and it is still a good and frightening sight to behold.

The second way crocodiles can run is by using their belly. This is usually in a muddy substance and not on hard dry land.

They lay on their bellies and push themselves forward with their legs next to them.

This way they do not put their full weight on their small legs.

Plus they can move very fast forward, by using their body weight as the propelling force.

The belly run is often a good pose as it helps them to get in the swimming position when they hit the water.

How Fast Can a Crocodile Swim?

Crocodiles swim faster than they can run and are also excellent divers. They can hold their breath for up to one hour under water!

The average crocodile can swim up to 20 km/h! Most crocodiles can swim faster than they run.

More dangerously, they can swim effortlessly and keep up a fast pace for a long time. A human may run faster than a crocodile on land, but it will never win a swimming race. 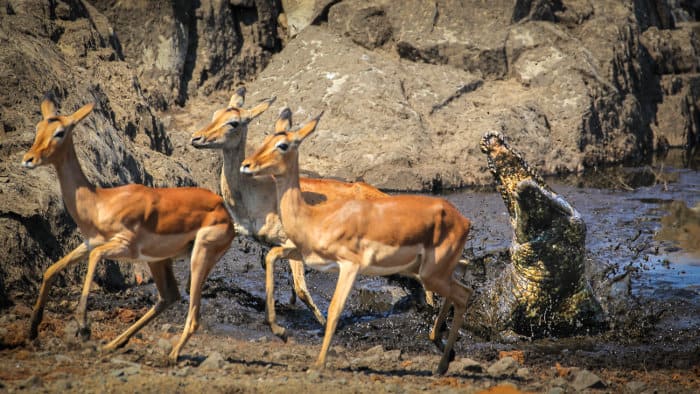 Crocodiles cannot run at their top speeds for long distances, so they will not win any African animal race. However, they will win a meal with the element of stealthy surprise.

Most crocodiles wait for their prey in the water and attack when their prey’s guard is down. They have one of the fastest and most violent spurts of acceleration in the animal kingdom.

One moment there is no crocodile. The very next second the crocodile has jumped from the water and caught a meal.

Things You Don’t Know About Crocodiles But You Would Like to Know.

It’s a strange thing to think of crocodiles as animals that have social engagements, as the perception is that they are just extremely dangerous.

Here are some interesting facts.

Do crocodiles really sleep with one eye open? 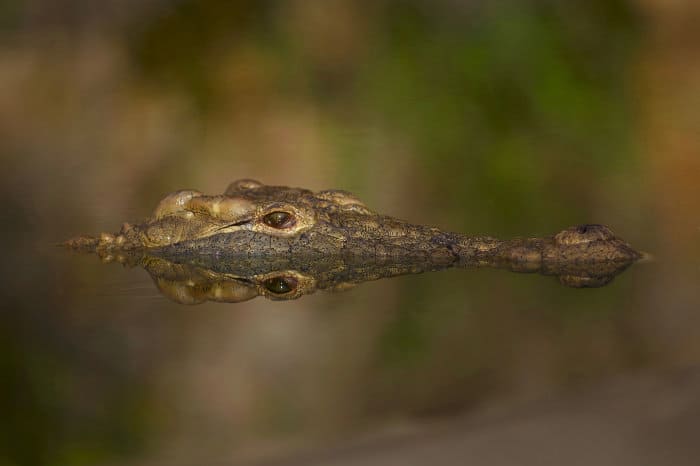 There is a legend that crocodiles can sleep with one eye open. You will often see them lying in the water with just one eye open, and it may seem that they are sleeping as well as watching out for prey or threats.

Both are correct. A crocodile in this state is “unihemispherically” sleeping, meaning one eye and one part of the brain (opposite side of the brain to eye) is still “working”. The other half is to observe potential danger. How cool is that!

Crocodile tears refers to supposedly showing fake despair and is in fact derived from the real deal.

One scientific explanation for this phenomenon is that tears are the result of hisses and huffs the predator makes while devouring prey.

Their feeding behaviour forces air through the sinuses and stimulates the lacrimal gland to produce excessive tears.

Why are crocodiles yawning on river banks? 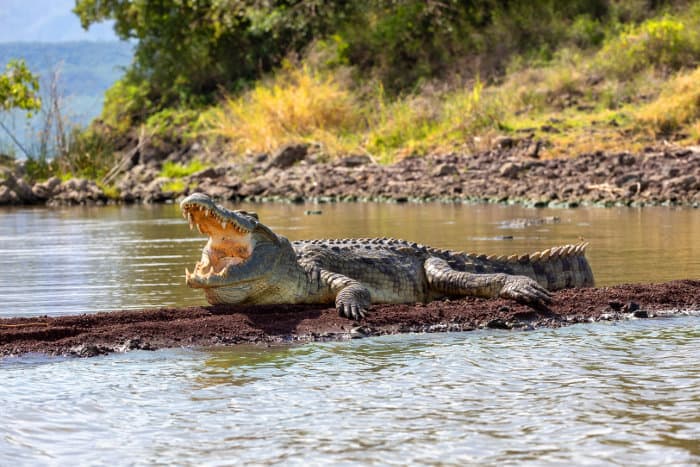 You will often find crocodiles in the sun lying about with their mouths open. It seems strange when they do this yet it is their way of sweating and cooling off.

They’re not yawning, just chilling out!

A crocodile’s mouth is so big…

Crocodiles need a long and strong jaw to snare their prey.

They have only 24 teeth in their mouth and these are merely for holding onto their prey and not chewing them.

Crocodiles use their jaws to crush their meal and usually drown it underwater.

More About How Fast a Crocodile Can Run 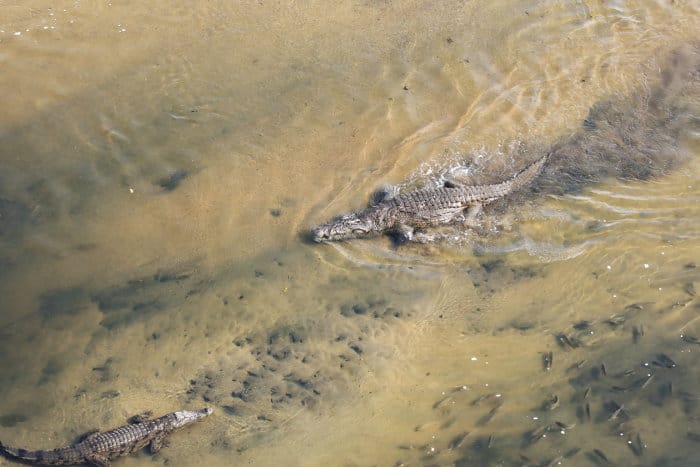 Crocodiles have evolved, survived and thrived for tens of millions of years. They are one of the oldest animal species in Africa. Considering their demeanor and intense physical abilities, they should continue to do so.

Crocodiles are very interesting, albeit strange animals. The facts above mean almost everyone fears, respects and admires their abilities!

Given what we know, it’s best that when you encounter a crocodile, you steer clear. You don’t need to know how fast a crocodile can run to sense it is very dangerous.