Who is Klipspringer trying to call? No, we are not talking about the fictional Great Gatsby character Ewing Klipspringer, rather, a beautiful African antelope in search of its life-long mate.

These monogamous creatures enjoy prancing across the African savanna together for their entire lifespan… and we thought that true romance was dead!

Hear the name klipspringer and you may also wonder what kind of African animal you can come face to face with on an African safari. The tip-toe klipspringer is commonly springing around on Africa’s most vertical rock faces. Here are 11 facts about one of the continent’s most elegant antelope. 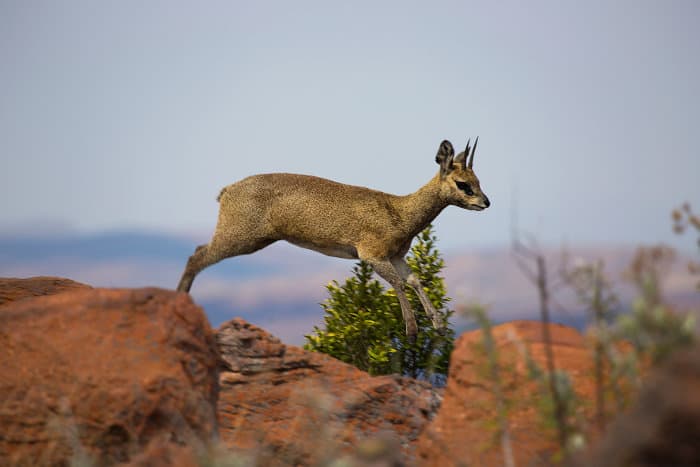 Instead, the Afrikaans named this gregarious antelope klipspringer, meaning ‘rock jumper’ in Dutch, and you’ll soon understand why.

You will catch a glimpse of this nimble antelope in the northeast of Africa such as Sudan, Ethiopia and northern Somalia.

It can also be spotted on a South Africa safari, in areas such as Zoutpansberg and Lebombo mountain ranges near Kruger. Klipspringer also inhabit South Africa’s Western Cape, coastal Angola and Namibia.

Even though klipspringer live on steep mountainous terrains where not many predators will venture, klipspringers only live as long as domestic cats, up to around 15 years. 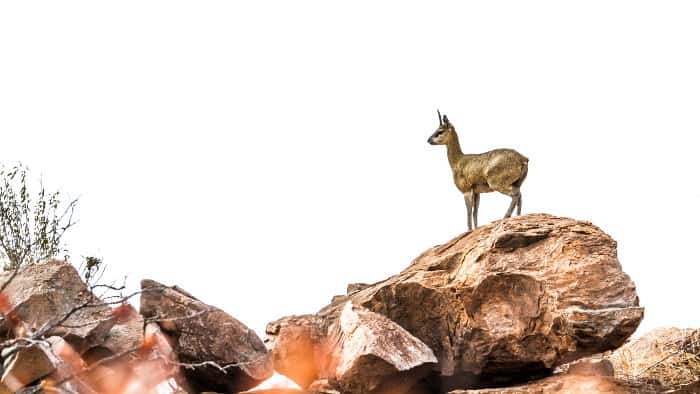 The African rock leaper has immense agility in the rocky habitats of east and south Africa. You could say the klipspringer is like a ballerina gracefully jumping around on its tiptoes, minus the pink tutu of course!

A klipspringer’s hooves are cylindrical, meaning they have parallel sides which form the shape of a cylinder. The hooves are long and downward-pointing with blunt rounded tips, providing adaptation and celerity in its rocky environment, while enhancing its grip.

Is it a bird, is it a plane… no, it’s the world’s highest show-jumper and the award goes to the champion klipspringer! Despite their dainty size of just 1 meter tall, they can jump as high as eight metres in the air.

Klipspringers can easily leap over the world’s tallest mammal on Earth today, the great giraffe. With no comparison at all, the highest human high jump on record is only eight feet (2.4 m). 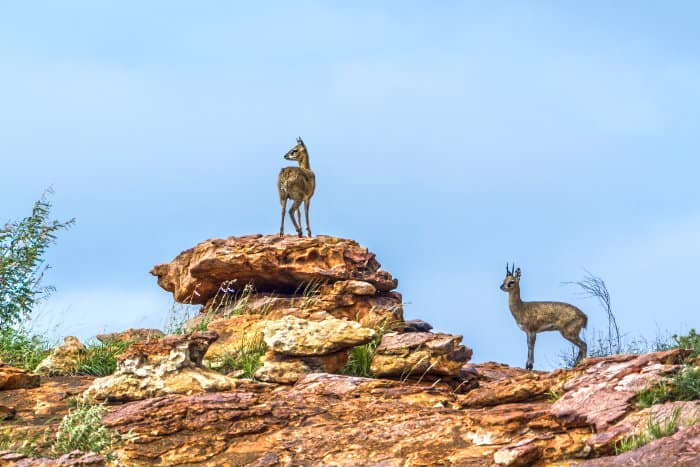 ‘Till death do us part.’ Let a lifetime of bonding begin in wild Africa. Unlike most other animals, klipspringers will choose just one mate to go through life with. How loyal and sweet is that?

Klipspringers don’t venture far from one another, staying within a close proximity of up to approximately 5 meters at all times. Talk about zero personal space! There’s no ‘me-time’ for this antelope.

The devoted klipspringers work in partnership throughout their long-term relationship, especially when it comes to feeding time. One mate will act as a sentry, like a soldier stationed to keep guard, while the other browses for food. Teamwork at its best!

Oreotragus oreotragus create unique sounds to communicate with each other. If there is a sense of danger, the klipspringer releases a shrill, ear-piercing whistle through their nose.

When they are scared or distressed they begin to make a roaring sound. To show affection during mating season, males are known to make a soft humming sound. 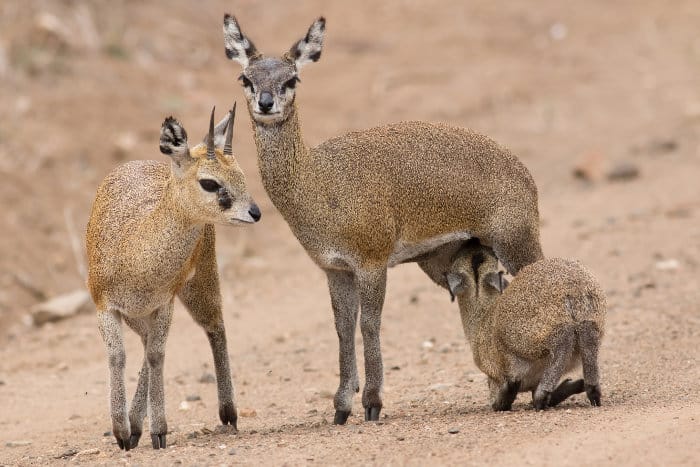 In most of Africa, klipspringer breed between August and September. During mating season, the male is domineering and arches its neck while humming.

The gestation period is six months. Since the young is born it is left hidden in rocky alcoves for three months, with visits from its mother three or four times a day for milk. This is to help protect the newborn from any potential predators.

A male forms exclusive territories ranging from five to ten acres in size and rarely leaves, fiercely defending its home with their life-long partner and offspring. Sometimes neighbouring klipspringers may join the gang, however, you won’t normally find any more than eight in a herd.

8. Prominent features of the klipspringer

The klipspringer is a small but stocky animal with overdeveloped hindquarters, weighing between 8-18 kg.

A more prominent feature of this gregarious antelope is its huge, black preorbital glands, which are narrow slits in the corner of its eyes. In some species, they play a critical role in scent marking.

The coat of a klipspringer is variable in colour and used efficiently for camouflage. Grey, yellow and reddish-brown covers its body with markings of white on the lips, chin and underparts.

Unlike most of Africa’s elegant antelopes, its fur is thick, coarse and brittle, and is used as a cushion against falling stone. Super handy while living a life on the rocks!

The ears of a klipspringer are small and white inside with a conspicuous black border. They’re positioned right at the back of the head to make way for its horns.

The klipspringer’s short and spiky horns measure up to 15 centimetres. You will notice both male and female klipspringers hold horns on their compact-sized heads in the eastern parts of Africa. Although, due to competitive interaction down in South Africa, only male klipspringers have horns.

When grazing and loving they must watch out for fast felines, such as leopards and caracals. These are the klipspringer’s main predators, on the ground that is. The tiny toe-prancing klipspringer is also on alert for predators falling from the sky.

It is common for black eagles to come soaring down when klipspringers linger on rocks. These delicate looking animals are the ideal feast for eagles, although their swift feet and balancing talents can keep them out of danger.

To avoid the risk of attack from such predators, these antelopes are mostly nocturnal creatures. They tend to rest during the day or sunbake to wake up, completing most of their activities late at night when it’s safe.

Klipspringers are herbivorous animals living the ‘rock and roll’ lifestyle on the cliffs, but they don’t enjoy the greatest dining experience in the world. They mostly enjoy grazing on succulents and other rock plants.

Luckily, klipspringers do not need to drink much water. This suits their lifestyle as they don’t need to venture far from their rocky home. Morning dew becomes a source of drinking water and they also absorb liquid from their plant-based diet.

11. Klipspringers to live forever – we hope 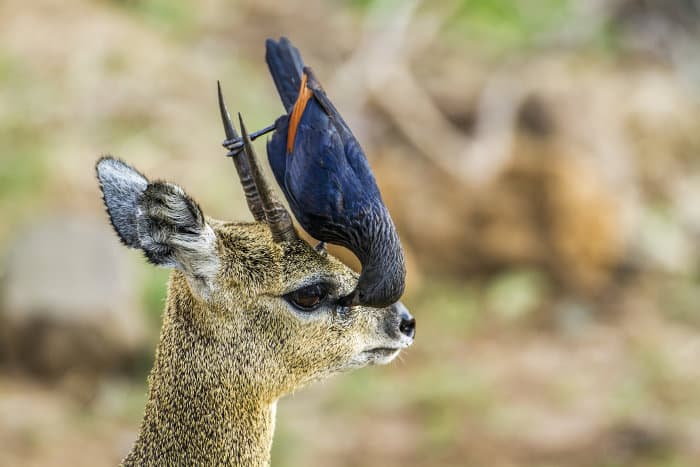 Excellent news, the klipspringer is classified by the IUCN as ‘least concern’ and not at risk of extinction.

Due to their restricted habitat of choice, rough environments make it inaccessible and unfavourable for predators to attack. Only if its predators had cylinder-like hooves, like the klipspringer!

Still, let’s not forget how important it is to protect the wilderness where African animals can roam free. By going on an African safari and connecting with your wild side, you will also do your bit in protecting incredible animals for future generations.