The magic and mystery of African rhinos has captivated generations of wildlife enthusiasts, travellers and explorers. But there are two African rhino species, so what is the difference between the black rhino and white rhino?

Here’s a clue – they are both gray, so you can’t distinguish them based on colour!

Read on as we guide you through the black rhino, white rhino, and even a gold African rhino. 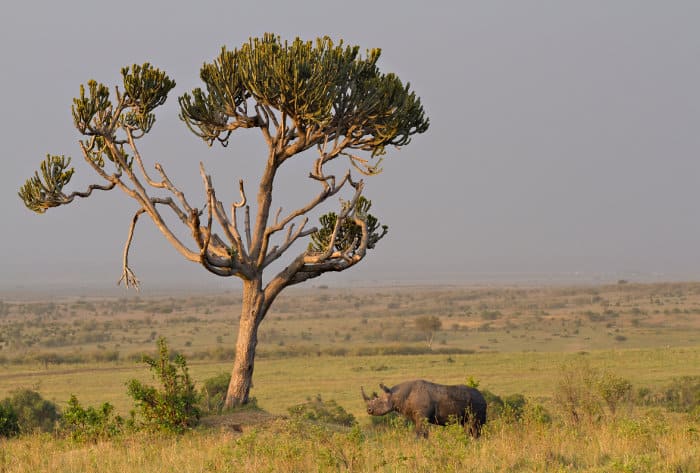 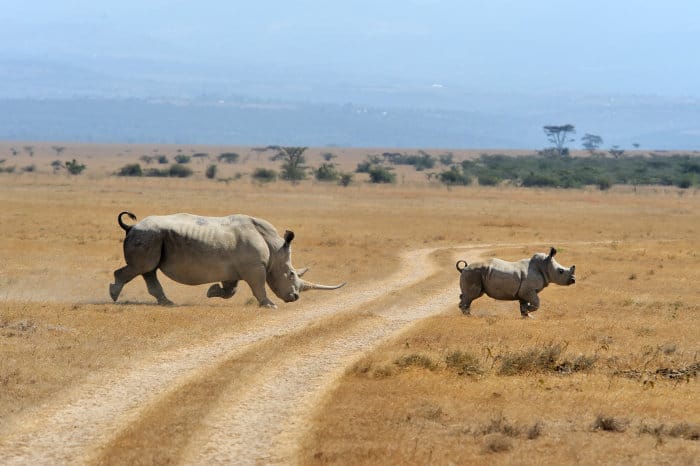 The rhinoceros is a member of the African big five animals. This big five is undoubtedly the crown jewel of Africa, the five animals most sought after by safari goers and hunters. Just remember that there are far more than five African animals!

In fact, the big five is a term created by colonial hunters due to the size, strength and danger five species represented. On this list are rhino, elephant, lion, leopard and Cape buffalo.

Don’t for a minute underestimate the speed of rhinos either. They may be huge but they are known to reach up to 50 km/h on a charge, so it’s best you don’t try and outrun them!

There are five different rhinoceros species and only two are found in Africa. These are the white rhino and the black rhino. We’ll get to the gold rhino a bit later.

Want to know what a rhino is saying? Check out this article on all the different rhino sounds. 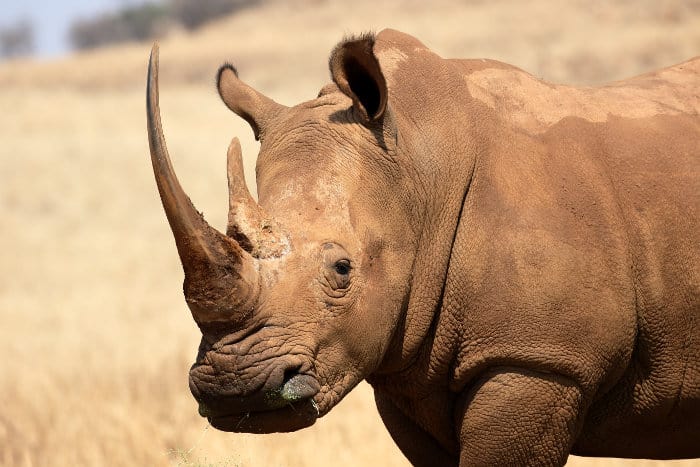 The white rhino is the larger of the two mammals and is found mostly in South Africa. They roam the grasslands of Southern Africa and are known to be more placid compared to black rhinos.

White rhinos can grow up to 50 years old in the wild and have complex social lives. Research has shown that they will form a crash (group of rhinos) of up to 14 rhinos, mainly females with calves in the wild.

Unlike the black rhino, they have a broad, flat lower lip making it easy to crop grass close to the ground when grazing. This is because white rhinos are grazers, living mostly off grass.

White rhino females reach sexual maturity at age 4-5, but will not breed until age 6-7. Following a lengthy gestation period of 16 months, the female will give birth to one calf and stay with its young until their next calf is born. 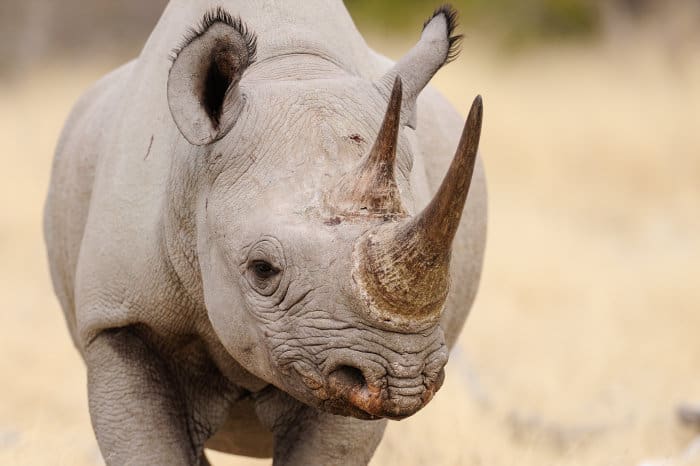 The black rhino is also referred to as the hook-lipped rhino, due to its distinctive lip. They are browsers, not grazers. Unlike the white rhino, this species plucks vegetation from trees and bushes, making good use of their hooked lip.

Black rhinos are native to Kenya, Namibia, South Africa, Swaziland, Tanzania, Zambia, and Zimbabwe. Although more widespread than the white rhino, the total population is dangerously low. It is the black rhino that is most endangered.

Black rhinos are smaller than their counterparts, although any animal weighing more than 1000 kg can hardly be called small. They can live up to 40 years in the wild.

Black rhino males, or bulls, are not very sociable and prefer to be alone. They are bashful creatures who prefer a quiet life, and they will turn aggressive if anyone or anything threatens their tranquility.

The females are more sociable, like their white rhino counterparts, and will go on to produce their first calf around age 6. Their gestation period is also one month shorter than the white rhino at 15 months. 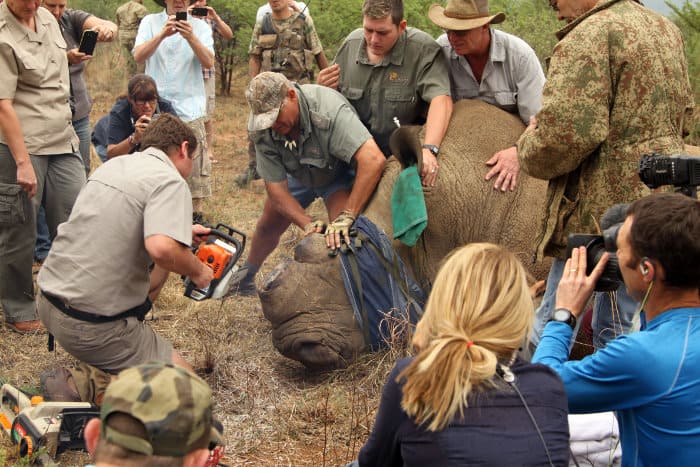 Adult rhinoceroses have few natural predators, apart from humans. It seems the attributes they are most admired for, such as their strength and power, make these beautiful animals much sought after by trophy hunters.

Sadly, rhino horn is much desired and believed to have magical powers in some cultures. In reality it is nothing but keratin, the same substance as the nails on your fingers.

Part of the fight against poaching concerns dispelling the myths about rhino horn. As long as people believe in these mystical powers, they will continue to support the trade in rhino horns.

Much progress has been made in recent years however, and this is reflected in the rise in numbers of the rhino in the wild. The global population of black rhinos crashed to fewer than 2500 in the early 1990s but in 2019 their numbers increased to between 5366 and 5627.

That’s promising, but both the white rhino and black rhino species remain critically endangered. An average of three rhinos are poached every single day in South Africa. Here’s the problem: selling rhino horn is legal in the rainbow nation.

The Fight Against Black Rhino and White Rhino Poaching 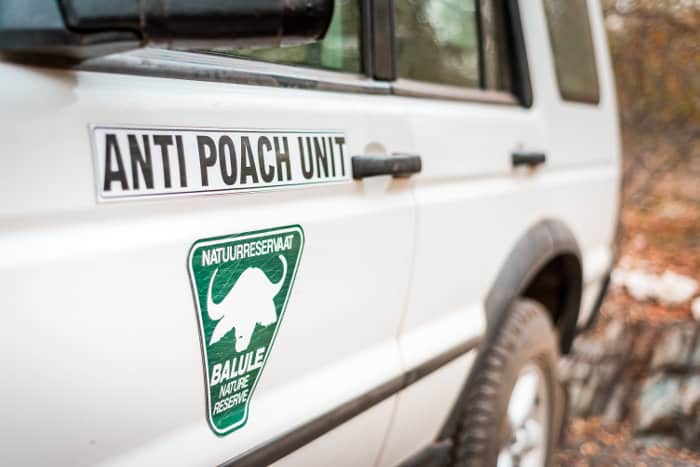 Poaching continues to threaten the existence of the rhino, both black and white, and much work remains to be done. It takes a brave man or woman to take up the challenge to physically protect these animals against armed poachers.

In recent years women have been trained in anti-poaching units with great success.

Think of a wildlife avenger and you can probably imagine a big dude that’s a cross between Ray Mears and Rambo. In South Africa they have a crack anti-poaching unit made up of young women.

Calling themselves the Black Mambas, these women are guarding South Africa’s critically endangered wildlife with their own lives. Each of the women spends 21 days straight patrolling a reserve by foot or jeep. And here’s the really “cool” thing. While the poachers carry American hunting rifles and AK47s, the Black Mambas are completely unarmed.

Unarmed that is, except for two skills that women usually excel at: keen observation and a power with spoken words.

Black Mamba Patrols pick up on human tracks, snares, fence tampering, unusually skittish wildlife and the poachers themselves. These women know where the poachers have been and can predict where they could strike.

Black Rhino vs White Rhino and Now a Gold Rhino 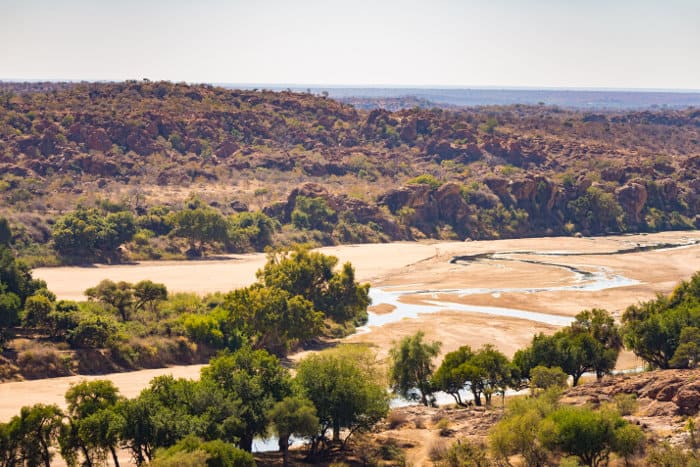 In 1934 a farmer and his son, an amateur archeologist from the University of Pretoria, unearthed a small golden rhino from a royal grave in Mapungubwe.

They had stumbled upon the royal burial ground of  The Kingdom of Mapungubwe, a pre-colonial civilization in Southern Africa (c.1075–1220).

The rhinoceros was seen to be one of the most powerful animals on the African continent and casting it in gold gave it the highest status.

The significance of this 30 cm golden rhinoceros is in a word, huge. It challenged, some would argue very successfully, the apartheid ideology that the Europeans were the first sophisticated civilisation in Southern Africa.

This colonial narrative went on to claim that black South Africans had arrived at the same time the Europeans did. The discovery at Mapungubwe confirmed that this sophisticated and vibrant African society had occupied this region for at least 1000 years before the Europeans arrived.

The rhino pride of South Africa 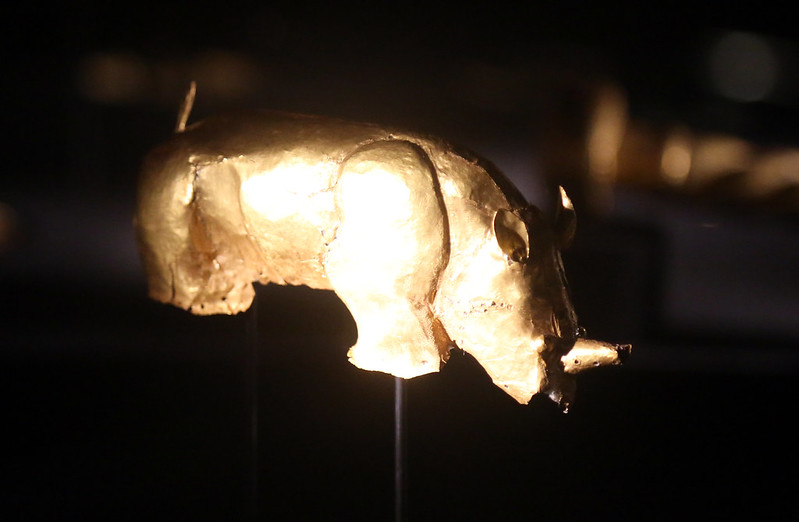 The golden rhinoceros was declared a National Treasure by the new democratically elected government of South Africa in 1999 and went on to create the Order of Mapungubwe, the highest honour in South Africa of which Nelson Mandela was the first recipient in 2002.

In July of 2003, The Mapungubwe Landscape was declared a World Heritage Site. The golden rhino was included in “South Africa: the art of a nation” exhibition in The British Museum. Today, this small, but powerful golden rhino can be seen at the University of Pretoria Museums.

Where to See Black Rhinos and White Rhinos in the Wild 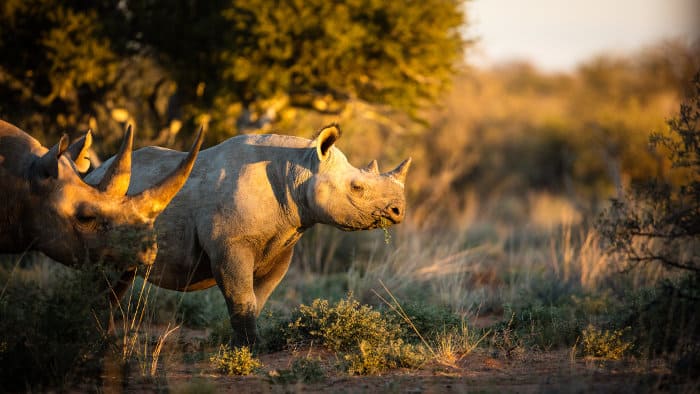 Black rhino vs white rhino has long been the subject of study for zoologists and wildlife biologists alike. Many different details separate one from the other, from behaviour to breeding. But you needn’t be a scholar to simply enjoy this majestic animal in the wild.

Black rhinos are more commonly encountered in East Africa, notably in Ngorongoro Crater and private concessions around the Laikipia Plateau. Kenya’s Lewa Wildlife Conservancy is one of very few places where you can see black rhinos and white rhinos side by side.

One of the best means of taking action against rhino poaching is to go on safari. An African safari supports the conservation of the land and helps ensure both white rhinos and black rhinos have space to thrive.