Driving through the magnificent plains of Africa you may come across a crowned beauty. First, you’ll see an eagle-like head, crowned with wispy feathers. Then, a plumage of grey-blues and white, and elegant long legs.

The secretary bird is widespread throughout Africa and owes much of its recognition to its name. But how did this bird get the name, Secretary?

Are they particularly good at calling in the wild? Do they have tactical organizational skills? Or is it something more obvious?

Let’s find out how this bird got its name, and uncover what life is like for a feathered secretary in Africa.

The Secretary Bird’s Mysterious Name: Where Did it Come From? 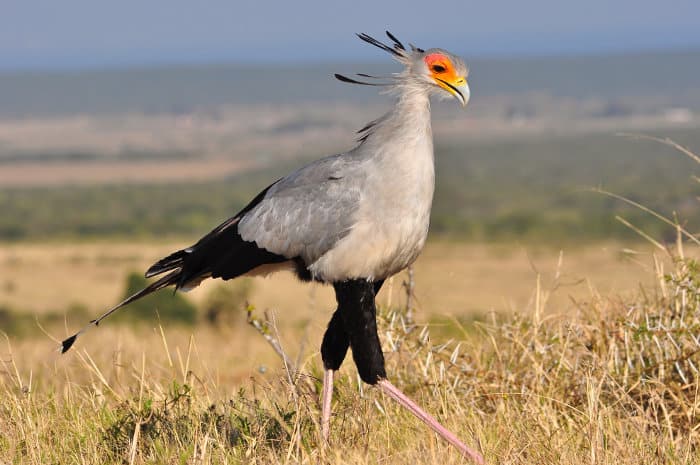 In the 1800s, there was a time where male secretaries had an unspoken rule regarding their dress code. Picture a secretary, dressed in grey, with his quills sticking out from behind his ears.

The coloring of the bird, along with feathers resembling quills and a tailcoat, is precisely the reason for its single species name.

The secretary bird’s scientific name is Sagittarius serpentarius. This more specifically translates into ‘archer of snakes’. And this crowned beauty is one of the best snake hunters in Africa.

It appears that the beauty of this bird has attracted a lot of attention, even in the 1800s. With their black head plumes, inquisitive face, and tall legs, it stands out as one of the most good-looking fowls. Below are some of the other defining features of the secretary bird. 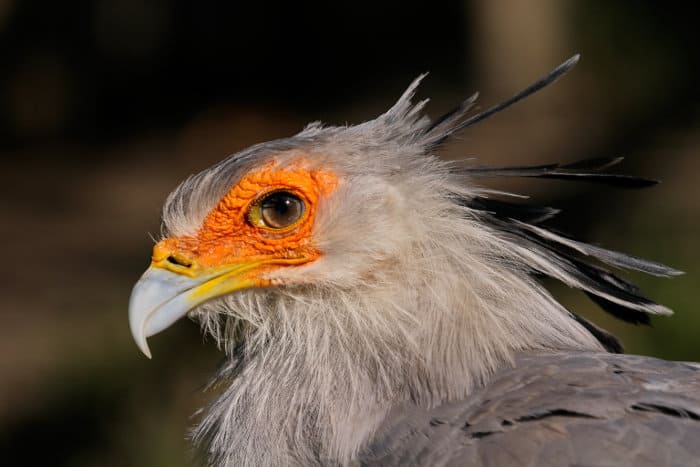 While the secretary bird has a lot in common with other birds of prey, like strong legs and an impressive wingspan, they have something else to show off. This is a bird with eyelashes.

In adults, the naked facial skin is a beautiful color of orange and red, featuring big, wondrous eyes and long lashes.

The bird’s long and slender legs play a big factor in its impressive size – and the quill-like feathers add extra height. The secretary bird has the longest legs of all birds of prey.

In total, the crowned bird reaches on average 1.3 meters (4 ft 3 in). The bird’s height proves to be quite intimidating for those looking up from below. 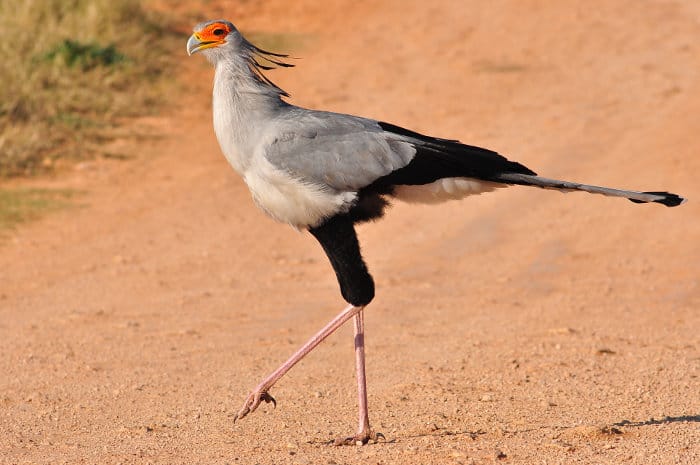 Although this bird has some beautiful features, you wouldn’t necessarily say the same about their feet. These are mean machines, and they play a huge role in the success of these birds.

Their feet are powerful stomping weapons. They’re able to stomp a force that’s five times their body weight, so they don’t need to be looking pretty.

Unlike other birds of prey, who carry their food in their claws, the secretary’s toes aren’t that good at carrying things. However, with shorter nails and scaled skin, the bird is able to protect itself from snake bites and harsh terrains. They’re perfect for hunting and prowling an enormous area.

Now that we know how this bird got its name, and where its beauty lies, let’s take a closer look at what life is like for them. 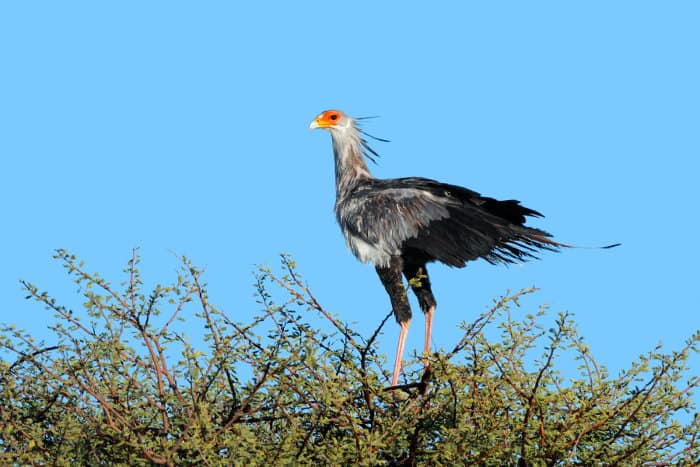 Below you’ll find some of the general facts about the African secretary bird.

The Secretary bird is endemic to the grasslands in Sub-Saharan Africa, as well as in the open plains. They are commonly found in Senegal, Somalia, and all the way down to South Africa. In both South Africa and Sudan, the glorious birds appear in the nation’s coat of arms.

With their long, scaled, and protected legs, they easily roam around the tall grasses, spying on prey from above. Their ideal habitat is one with scattered acacia trees, where they can leisurely lounge on the branches and keep an eye out for prey.

The acacia trees also serve as roosting spots. After the early hours of dawn, the birds leave the branches for their daily galavant. If the African sun is too harsh, the birds will rest under the shade. 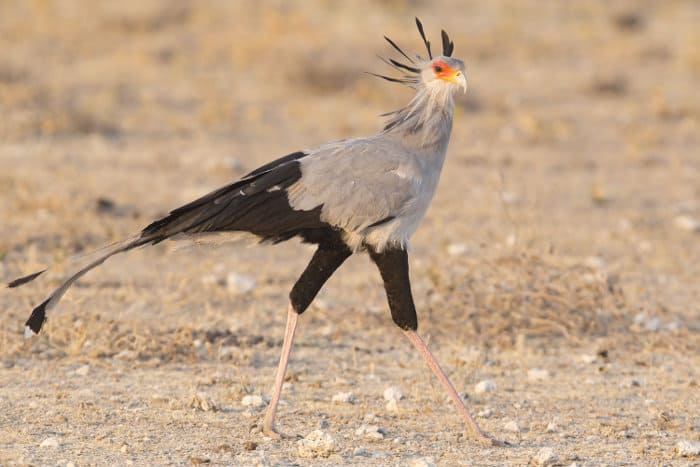 One of the most interesting things about these birds is that they don’t fear the results of fire. They use the scorched fields as a hunting opportunity.

The birds will often congregate on recently burnt fields to search the area for wounded and scared animals. Many small animals and insects retreat out of the grasslands when there is a fire.

The male and female secretary birds will attract each other’s attention by swooping high up in the sky and then plunging back down again. As they soar in the sky, they’ll create a wide circle to impress one another.

Once they’ve found a mate, these birds will pair for life. The two will help each other with nesting, roosting and hunting. 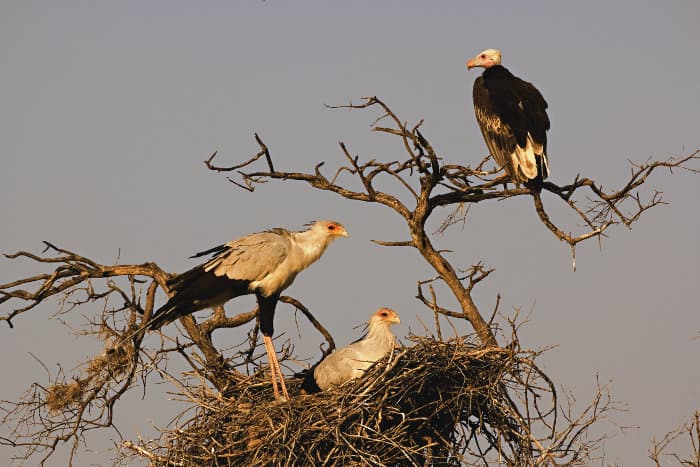 Mating will either take place on the ground, or in their favorite trees – the acacia trees. The monogamous pair will then construct a large nest together in the tree, which can reach up to 2.4 meters across.

The female will lay between one and three greenish-blue eggs. Each egg is laid around two days apart. Although the parents do most things as a team, the female will spend the majority of her time keeping their eggs warm.

Depending on the order of the laying, the eggs will hatch on different days, about 50 days later. And now it’s time for the males to step up. Both parents will feed the chicks regurgitated and liquefied foods. Rodents, insects, and small animals provide the young with nutrients to grow.

Once they’ve reached 12 weeks of age, they’ll really start to look like secretary birds. It’s also the time when they’ve got to embrace the wild and start flapping their wings.

When the youngsters begin to master the flying, their parents will gradually start teaching them how to hunt, kick, and fend for themselves.

With crane-like legs, how equipped are these birds for flying? While they are strong fliers, they prefer to spend most of their time on the ground. 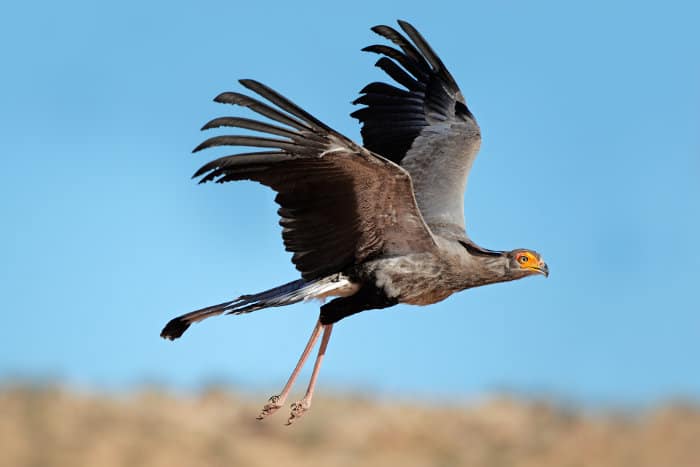 The secretary bird’s wing coverts are blue-grey in color, while the underparts are lighter grey and grey-white. The flight feathers, which provide thrust and lift, are a marbled grey and black color at the ends.

With a 1.3-meter wingspan, making it larger laterally, the secretary bird has some spectacular wings to show off. However, they’re not the biggest fans of taking flight (although they are good fliers). And when you do catch them flying, you’ll notice their long and slender legs trailing behind.

Flying can be quite a challenge when it comes to hunting from above. They need to execute a graceful descend in order to sneak up on their prey.

Secretary birds spend a great deal of time on the ground, so they have loads of practice when it comes to running. When they’re under pressure, they rely completely on speed and they’ll let their long, graceful legs do the work for them.

There’s no concrete number as to how fast these birds can run. They typically pace at a speed of around 2.5 to 3 km/h, and about 120 steps per minute. So you can only imagine how nimble these guys are when they feel threatened.

What do secretary birds eat? 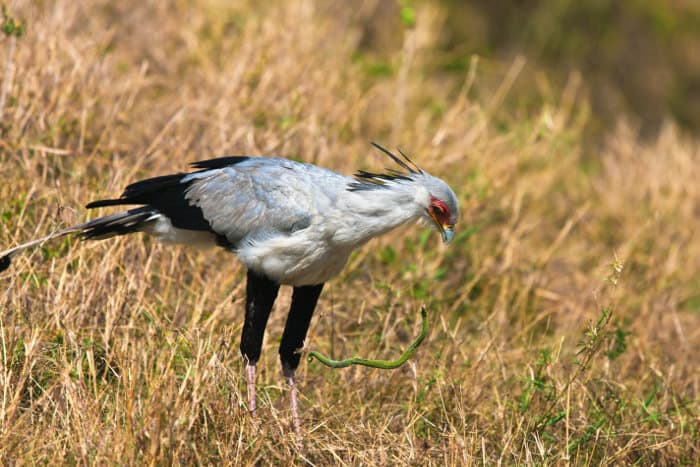 With powerfully strong legs, the secretary bird is well-adapted to hunting on the ground. Given that their scientific name is so appropriate, their favorite food is none other than slithery snakes. The birds are famous in the animal kingdom for hunting snakes throughout the savanna grasslands of Africa.

Although snakes are their main source of food, the birds feast on a variety of prey. The diurnal carnivores will consume amphibians, reptiles, insects, rodents, and even other birds’ eggs. You’ll often see them stamping with their large feet to reveal hiding prey.

Secretary birds like to do most of their hunting with their partners. However, if the bird has yet to find a mate, they will wander around alone, or in loose familiar flocks.

You may be wondering how these massive birds face the venomous snakes found in Africa, such as the king cobra and deadly puff adder? The birds first stamp on the snakes to prevent them from biting or escaping. Then they’ll peck on the necks with their beaks to eventually kill them.

These birds hold up to 50 km² of territory, which they’ll guard in pairs. Of this territory, they’ll hunt up to 30 km² each day. 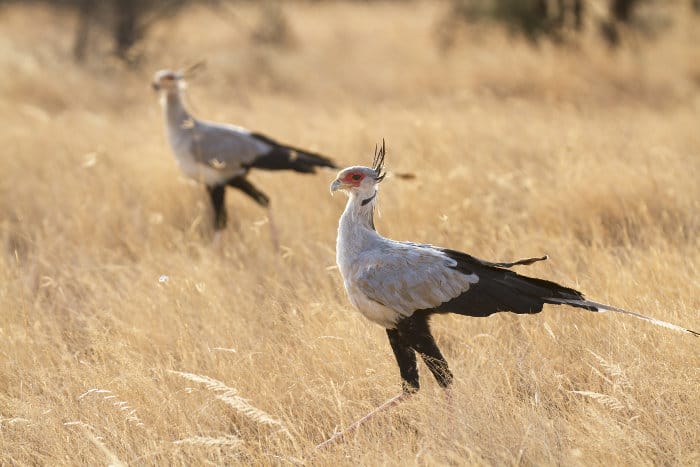 This bird with head feathers has attracted the attention of many travelers to Africa. While they look magnificent and graceful, these birds may take you by surprise.

For a chance to witness the secretary bird hunting, plan a safari in one of Africa’s many fantastic countries!