Its pastel plumage and variety of shades make it easy to spot.

In fact, seeing one of these little beauties warrants just as much attention and excitement as spotting one of Africa’s Big Five animals.

There is so much more to these multicolored birds than meets the eye. Their agile flying abilities, unusual way of hunting, and place in African folklore are just as intriguing.

To appreciate just how amazing this bird truly is, here are our top 17 lilac-breasted roller facts. 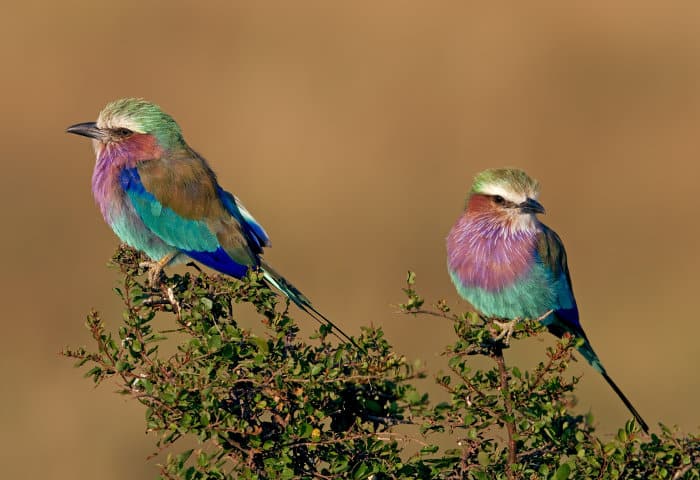 These birds reside throughout eastern and southern Africa, as well as the southern region of the Arabian Peninsula. They are common in Kenya, Zimbabwe, Botswana, northeastern South Africa, and Namibia.

They also live in captivity and in some of Africa’s national parks. They’re definitely one of the most fascinating safari birds to keep an eye out for.

The lilac-breasted roller keeps to areas with open woodlands and savannas. They need access to trees for nesting and perching.

They specifically prefer areas with widely scattered trees and avoid environments where humans have settled, like farms, towns, and cities.

3. Members of the Roller Bird Family 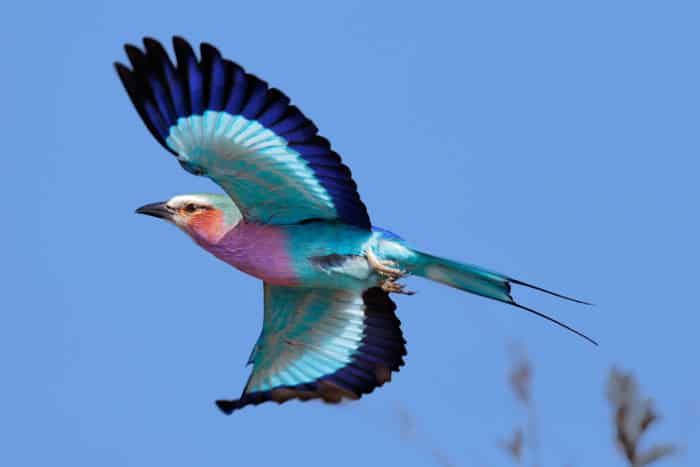 The roller bird family (also known as Coraciidae) is a species of Old World birds named for their unique ability to perform aerial acrobatics in flight. This consists of side-to-side rolling motions and fast, shallow dives from high elevations.

This impressive display of ability from African roller birds happens when in courtship or during territorial fights. If their courtship displays are successful, they will breed while in flight.

Other colorful roller birds of Africa

There are 12 species of roller birds. Here are a few more colorful members of the family.

Blue-throated roller – This species is native to the tropical rainforests of Africa. The coloring of these birds is mostly chestnut brown with a bright orange-yellow bill. They have a blue patch on their throat, purplish-blue wings, and a blue tail.

Purple roller – These birds reside in sub-Saharan Africa. Measuring 36 to 38 cm, they are the largest of the rollers.

While perched, they look rather dull and are mostly earthy brown in color. However, in-flight, you can see their underparts, which are a beautiful purplish-pink streaked with white.

Abyssinian roller – This roller is native to tropical Africa, and also lives in certain parts of Saudi Arabia and Yemen. It has a tan-colored back, and the rest of its plumage is mostly light blue.

These birds are fierce protectors of their nesting sites. They will dive at perceived intruders, and even humans if they get too close.

4. The Lilac-Breasted Roller’s Call is Raspy

These lilac rollers have a noticeably harsh call. It lasts less than one second and repeats over and over again. They make this call during mating season or when there is a threat to their territory. Otherwise, these birds are mostly silent.

5. The Lilac-Breasted Roller Bird Has 8 Colors on Its Body 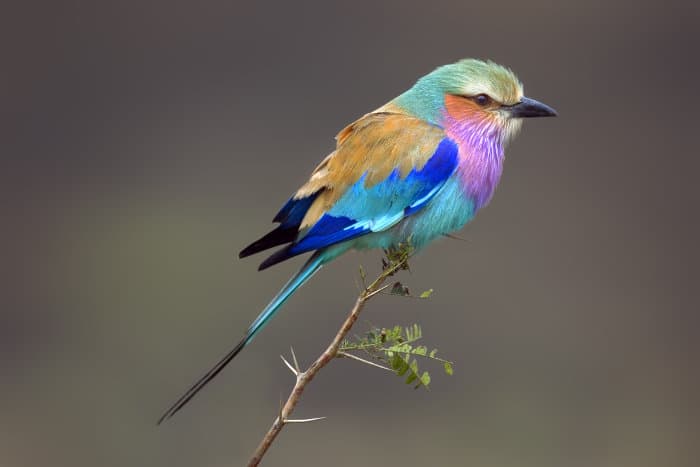 This is a bird of many colors. Typically, eight eye-catching tones fill their body.

The top of their head is green, their chin is white, and the band around their black beak is creamy white.

Moving onto their body, they have a lilac breast and a turquoise underside.

The top part of their wings is reddish-brown, trimmed with royal blue. They have a turquoise tail that ends in thin black streamers. Their feet are yellow with black tips. Juveniles are duller in color. It is not until adulthood that their hues really start to pop.

6. One of the Roller Bird Species’ Tallest Members

The lilac-breasted roller has a robust body, with a proportionately large head. Their average body size is around 37 cm. This length includes their tail, which is approximately 8 to 9 cm long. They have a wide wingspan of between 50 and 58 cm.

Most roller bird species are between 25 to 32 cm, making this lilac-breasted bird a longer member of the roller family.

7. They Are Not a Dimorphic Species 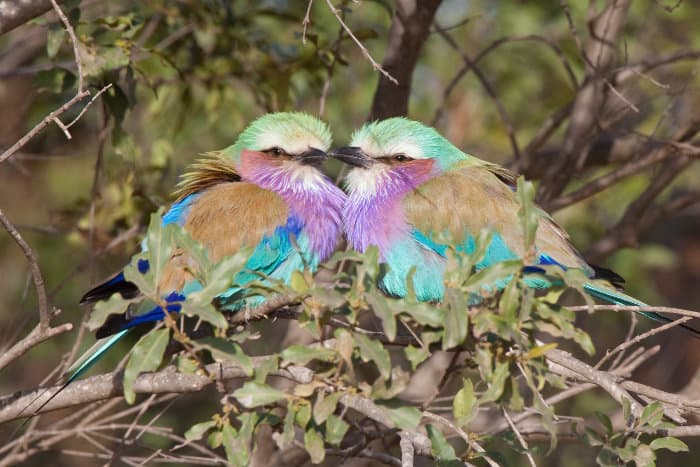 African lilac-breasted roller birds are not dimorphic, meaning there is no visible difference between the males and females.

Both sexes have similar coloring and it is hard to tell them apart by looking at them. Although, the males may be slightly larger.

Lilac-breasted rollers are carnivorous birds. Their diet consists of arthropods and small vertebrates.

9. Their Hunting Style is Quite Unique 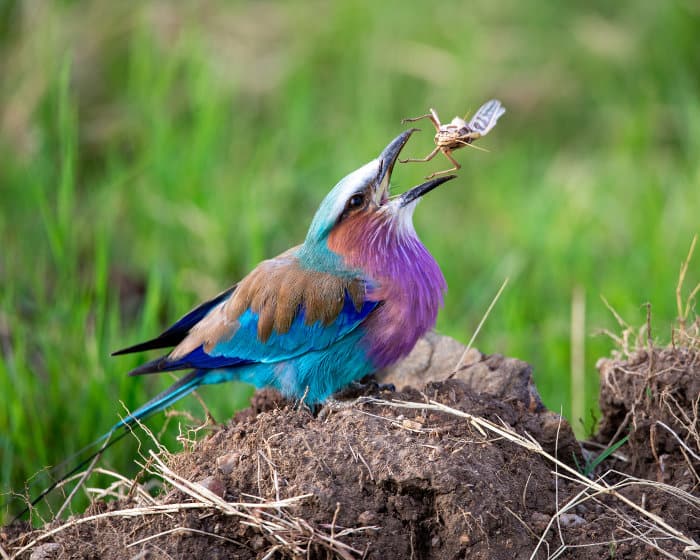 These small beautiful birds can be aggressive hunters. While surveying for food, they perch on tall vantage points, such as the very top of trees or long poles. They stay completely still while waiting for possible prey to draw near.

After selecting their target, they swoop down and attack. These birds consume their prey whole. If their victim is on the larger side, they will beat it against a rock or on the ground to kill it or force it into submission.

10. They Enjoy a Good Brush Fire

These clever little creatures will take advantage of brush fires. As insects and small animals flee to escape the flames, the lilac-breasted roller will swoop down and enjoy access to an easy meal.

11. They Can Live for a Decade in the Wild 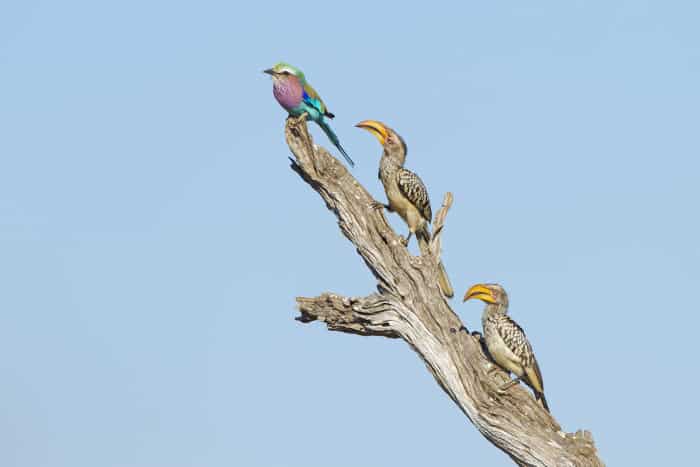 The average life expectancy of the lilac-breasted roller is around ten years. However, they can live longer in captivity.

The predators of the lilac-breasted roller include the Wahlberg’s eagle, the Bateleur, the red-necked falcon, and the peregrine falcon. 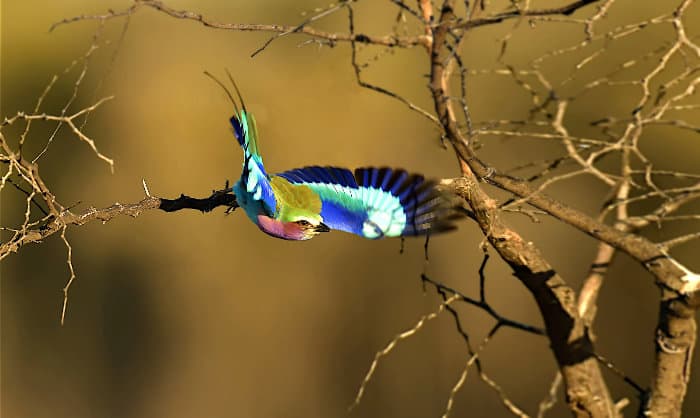 Although these roller birds don’t like to live near human settlements, they are typically unafraid of people. If you’re lucky enough to spot one in the wild, it can be relatively easy to approach and get an incredible view and photograph.

These gorgeous pastel-colored birds appear to be monogamous. Adults either live in pairs, or by themselves. During the winter months, they may live in small groups. 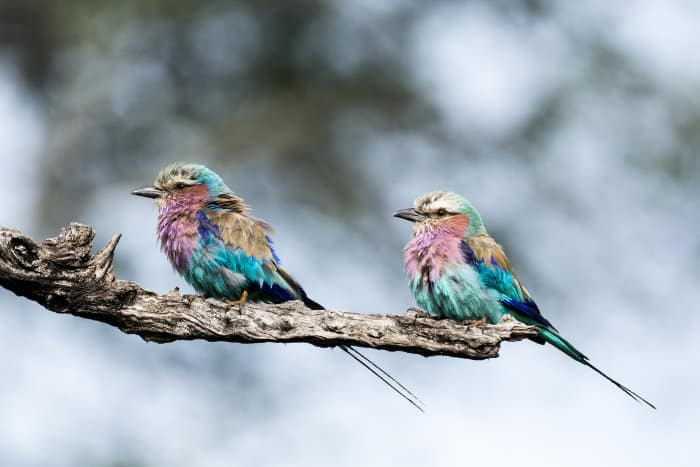 The mother bird lays just one brood per year, which usually contains 2 to 4 plain white eggs.

For 22 to 24 days, both of the parents are responsible for incubation duties.

If threatened, both genders will aggressively defend their nesting territory. They will even chase off much larger predators.

After the chicks hatch, they are altricial and require the care of their parents for feeding. Both will share in this responsibility for 18 to 20 days after birth.

16. The Lilac-Breasted Roller is the National Bird of Kenya

The two national birds of Kenya are the rooster and the lilac-breasted roller. The country has the highest population of these birds found anywhere in the world.

Kenya is rich in diversity and the 8 colors found on this roller bird represent the many different tribes of this East African country. In Swahili, “Kambu” is the word for this bird. 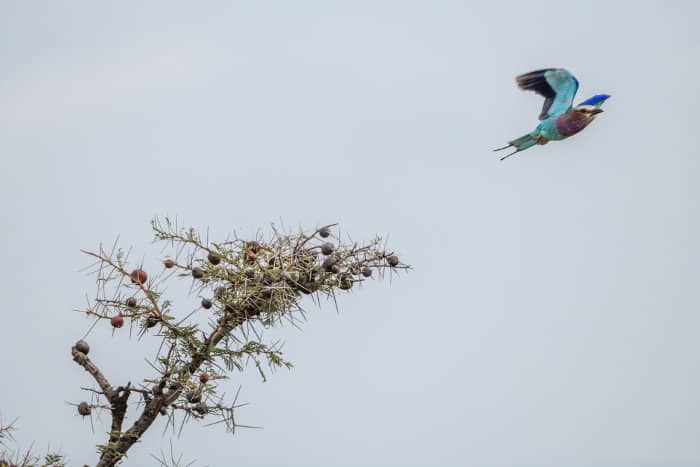 In many African cultures, the lilac-breasted roller symbolizes a deep connection between love and marriage.

The Afrikaners, who are descendants of Dutch immigrants that originally settled in South Africa, have traditionally used the bird’s feathers to decorate wedding dresses.

In fact, the Afrikaans word for this stunning lilac bird is “troupand”, which translates to “wedding band”.

In Zulu culture, this bird has a unique way of testing if couples are ready for marriage. The feathers of the lilac-breasted roller tie to make a band around the couple’s wrists.

This examines the lover’s compatibility. If they can keep the feathered band sealed, it shows they are able to work together. If it falls apart, they are not ready for marriage.

The Venda of Zimbabwe and South Africa fashion wedding rings from the bird’s feathers.

Several African tribes have historically considered this gorgeous roller bird to be a symbol of peace. Some kings would even sacrifice it to mark the end of a war and declare peace over their land. 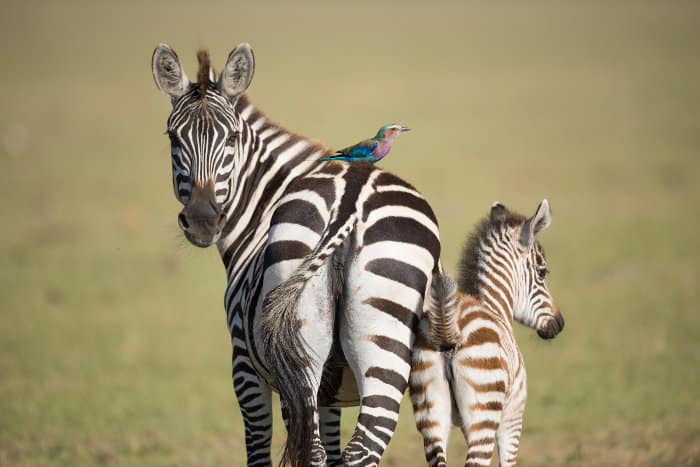 Because so many different colors cover their body, they’ve coined the nickname “rainbow rollers”. You definitely don’t have to be a birder to appreciate all the fascinating aspects of these striking creatures.

They’re prevalent in Africa’s national parks, which means booking a wildlife safari is one of the best ways to spot them. Seeing one of these colorful birds flying is an experience you won’t forget.