The African hoopoe’s bold stripes, long beak, funky hairstyle, and repetitive call makes it one of the most memorable birds you will encounter on a safari in Africa. This solitary bird is impressive to watch in flight as it flaps four to five beats before dipping slightly and resuming its trajectory.

Many African countries hold the hoopoe in high regard as it benefits communities by removing pests from the area. Learn more about the African hoopoe’s breeding, characteristics, habitat, and threats below. 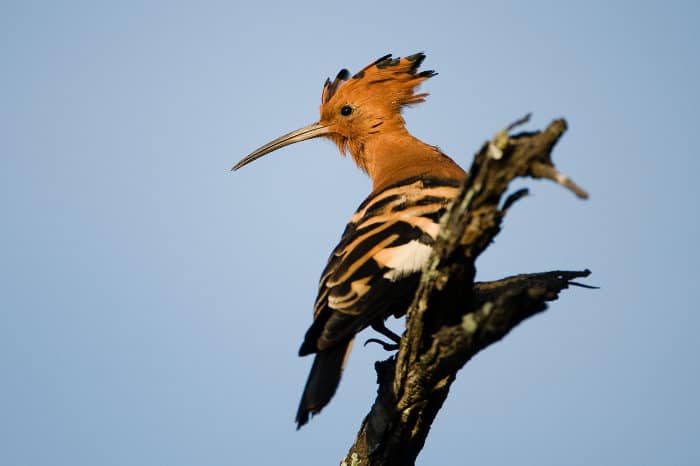 They have a distinct crest on their head which is chestnut in colour with black tips. The crest raises when the bird is eating or when it gets disturbed or startled. The male typically has a full chestnut colour body while the female is a greyer-brown.

Both males and females have black and white stripes on their wings and tails in a rounded shape. The striped pattern meets in a v-shape on their back. Juveniles are greyer in colour and have shorter beaks. The adult beak is typically as long as the bird’s head.

The African hoopoe’s name comes from the sound it makes and is onomatopoeic – meaning it gets written how it sounds. The call is soft, sustained and when sung by the bird it comes in a cycle of three to five repetitions. The male hoopoe calls frequently when advertising his ownership of a territory.

Size of an African Hoopoe Bird 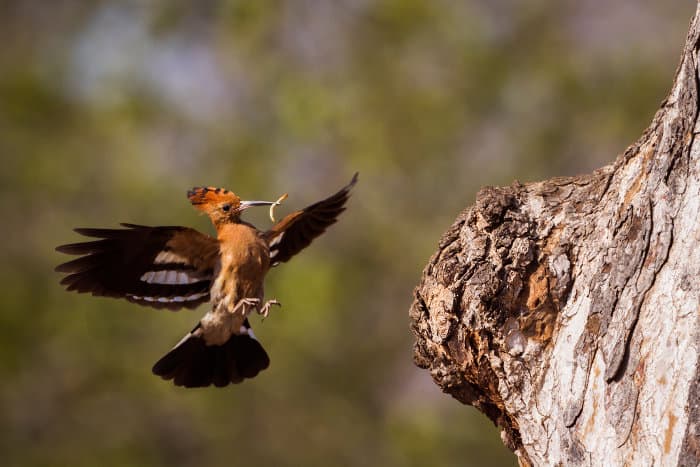 The African hoopoe is a medium-sized bird and averages a length of 25-29 cm from head to tail. They have a wingspan between 44 cm and 48 cm. When fully grown, the bird weighs between 28 g and 67 g. A hoopoe’s egg is smooth and measures around 26 mm by 18 mm in size.

Habitat of the African Hoopoe

While hoopoes from Europe and Asia migrate to the tropics in winter, the African hoopoe remains close to home and inhabits broadleaf forests and savannahs. The birds do travel short distances, preferring open areas with thorn bushes, trees, and riverine woodlands.

What is a Hoopoe’s Natural Diet 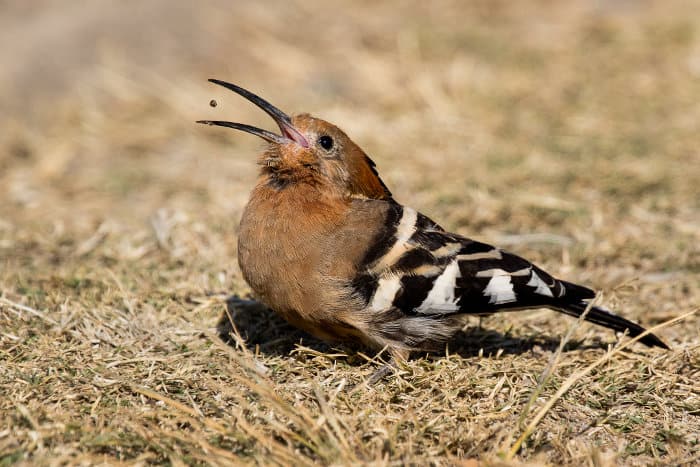 The African hoopoe uses its long beak to penetrate the soil in search of insects. When challenged by the insect’s size the bird breaks the meal into smaller pieces on the ground.

The hoopoe is monogamous and solitary or seen in pairs. It is a territorial breeder and may use the same nesting site for several seasons. It prefers nesting close to the ground, making nests in natural holes found in trees, stumps, cliffs, or boulders.

In urban areas the birds nest in abandoned vehicles, drainpipes, walls, wells, roofs, or nest boxes. Natural and urban nests are either unlined or lined with moss, grass, leaves or pine needles. 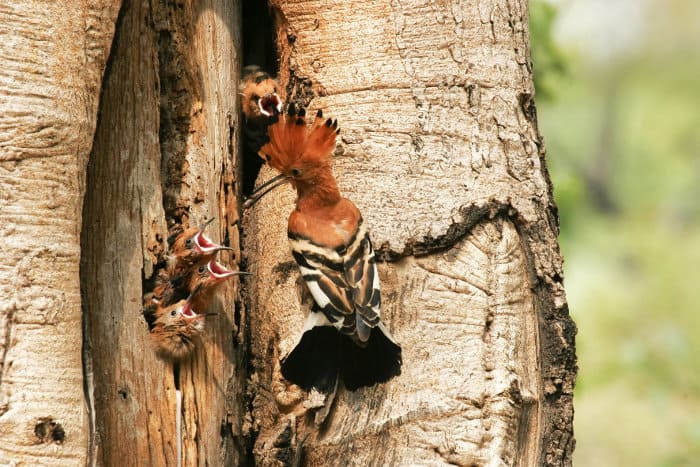 Once paired with a mating partner, the male African hoopoe finds a suitable nest. The female lays between 4-7 eggs over successive days, often taking a day’s break between the first and second egg. The female remains on the eggs, incubating them for between 15-16 days.

While the female remains with the offspring, the male provides food for the mother and chicks. After a week, the female also contributes to the chick’s diet until they leave the nest from the age of one month and find independence by the age of two months.

Pairs of African hoopoes remain together during the breeding period after which they may find a new partner. Males typically choose to use the same site to nest in the following year. The breeding season takes place from August to February and peaks between September and November.

The main predators of the African hoopoe are raptor species including hawks and eagles.

Despite the population of all hoopoe species declining, the rate of decline is not considered rapid enough to list any of the species as vulnerable. The IUCN lists the African hoopoe on its red list as least concern alongside other hoopoe species.

The decline in population is a result of habitat destruction due to agriculture and over-hunting. The IUCN recommends the management of landscapes to ensure suitable food sources for the species, alongside introducing controls over hunting to sustain the current populations. 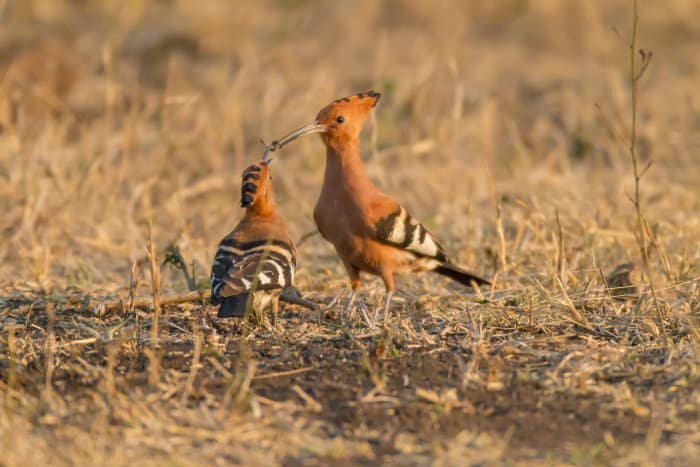 Next Stop, Seeing the African Hoopoe in the Wild

With the African hoopoe numbers declining and the natural environments reducing, your best chance of seeing this striking bird is to book a safari.

You’ll be able to spot hoopoes in Botswana, Kenya, Namibia, South Africa, Tanzania, or Zimbabwe. Head off during the breeding season to see the males foraging or visit in the following months to see the young chicks exploring.

Have you seen an African hoopoe in the wild? Share your experience in the comments below. 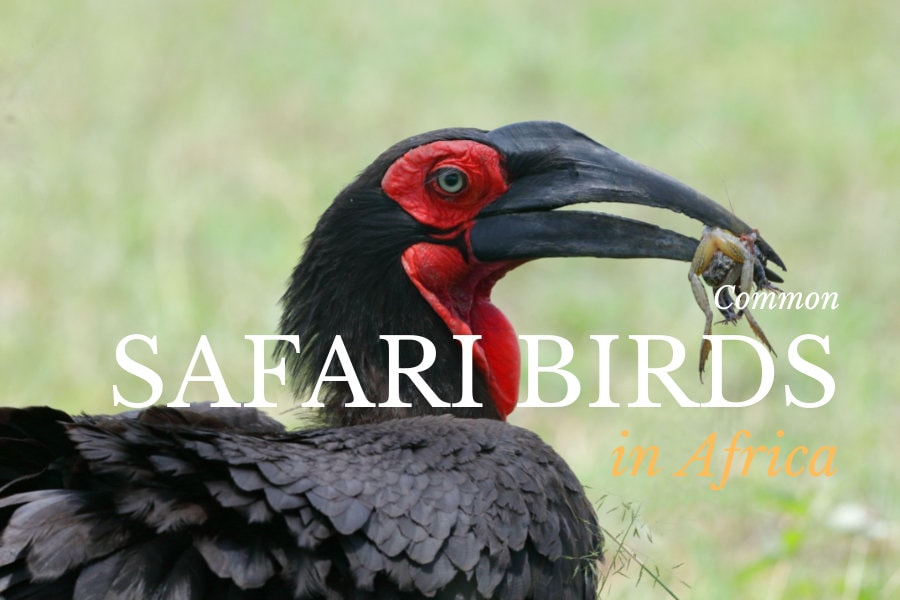