The Gambia is the smallest country in mainland Africa but this incredible continent has even smaller island nations.

The countries of Africa can be further divided between mainland and island nations.

There are 48 countries on the mainland, while there are six island nations. These so-called island nations are geographically and politically included in the African continent.

The largest country in mainland Africa by area is Algeria in North Africa, which has an area of 2,381,741 km². This makes it roughly a quarter of the size of the United States. But what’s the smallest country in Africa?

This post contains everything you need to know about the smallest countries in Africa as a whole, the mainland as well as the island nations.

What is the Smallest Country in Mainland Africa? 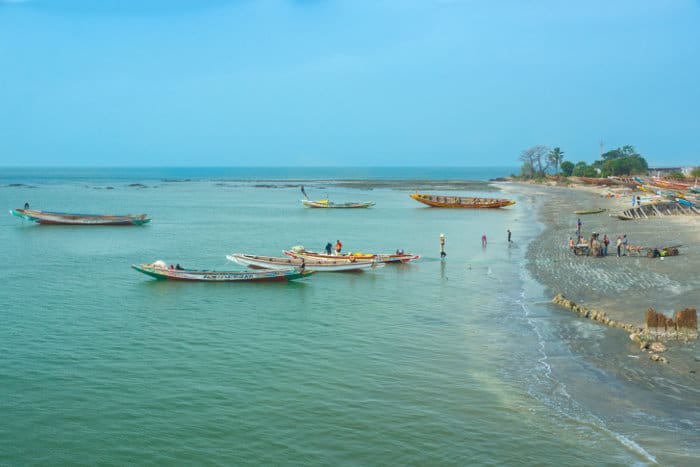 With a population of around 2.5 million people yet an area of only 11,295 km², The Gambia is the smallest country in mainland Africa. Should you want to, you could fit The Gambia into Algeria an incredible 222 times!

With the Atlantic Ocean forming The Gambia’s western border, Senegal surrounds it on the remaining three sides.

It takes its name from the River Gambia that flows right through the heart of this tiny country, which is just 50 km across at its widest point.

Legend has it that a British warship fired a cannon, and this created The Gambia’s border. Wherever the cannonballs fell, that was where they placed the border.

Though first colonized by the Portuguese, The Gambia became a part of the British Empire in 1765, when English became the official language. The country gained its independence precisely 200 years later.

What can you do in The Gambia?

Its Atlantic Coast is also linked to the transatlantic slave trade, which saw the people of Africa shipped to the New World against their will.

Kunta Kinteh Island (once James Island) is a UNESCO World Heritage Site that has several remains from this terrible period.

They offer visitors the chance to see various species of monkey, crocodile, porcupine, and 270 types of bird. This is a great place to see birdlife on safari.

What is the Smallest African Country?

We’ve covered the smallest country in mainland Africa, The Gambia.

However, is this the smallest country of Africa as a whole?

The answer is no.

When taking all of Africa’s 54 countries into account, the smallest country in the African continent is actually the island nation of Seychelles. In fact, the five smallest nations in Africa are all islands.

Discover Seychelles (Which is the Smallest Country in Africa) 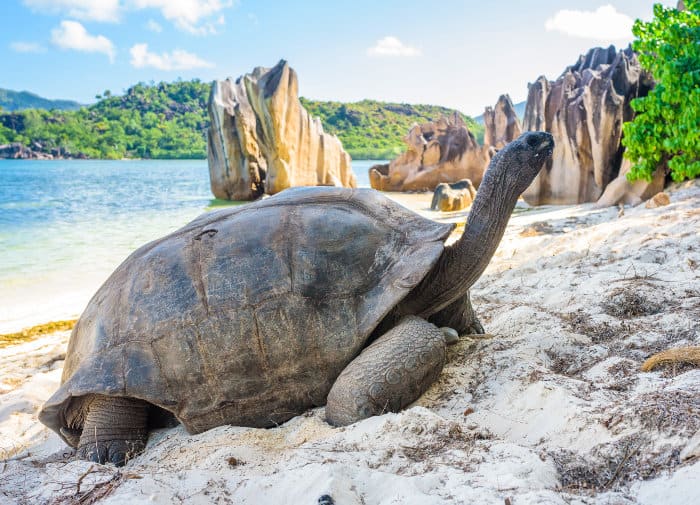 Sitting in warm Indian Ocean waters on the east coast of Africa, a little north of Madagascar, the Seychelles measure just 459 km². That makes it almost 24 times smaller than The Gambia.

Seychelles is also the smallest country in Africa by population, with just 100,000, compared to The Gambia’s 2.5 million. In addition, it is one of the wealthiest ten countries in Africa.

While known as an island nation, Seychelles is a single nation of 115 different islands.

It is 1500 km from mainland Africa, a beautiful little destination thanks to clear turquoise waters, white-sand beaches, and excellent snorkeling and scuba diving opportunities.

Scientists have noted over 1000 different species of sea life around the islands, including a number of shark species and sea turtles, that nest each year on the beaches.

Further inland, you will find giant tortoises who live on the Seychelles island. The giant tortoise came back from the brink of extinction.

Due to it being another former British colony, they named its capital Victoria after the nineteenth-century British queen. You can find Victoria on Mahé Island, the largest in the country.

First colonized by the French (and before that used as a base by pirates), French is one of the country’s official languages along with English and Seychellois Creole.

What is the Second Smallest Country in Africa? 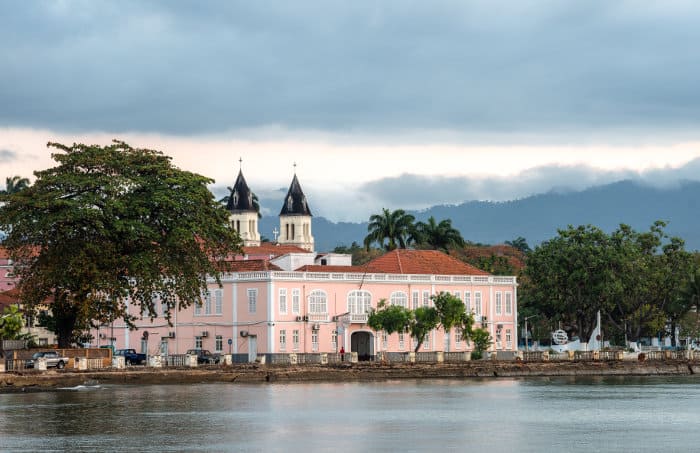 The second smallest country in Africa by area is the nation of São Tomé and Príncipe, a small group of islands on the other side of the continent.

Lying off the coast of central Africa in the Gulf of Guinea, beneath West Africa’s bulge, the country is close to both the equator and the Greenwich (or Prime) meridian.

Its name, which translates as Saint Thomas and Prince, comes from the Portuguese sailors who first discovered the two main islands.

Príncipe comes from the son of King John II, Prince Alfonso. Its name stands to honor the late Portuguese Prince.

Unlike other island nations, these offshore volcanoes were uninhabited when the first Portuguese ships arrived on their shores.

They quickly became an important base for the shipment of slaves from Africa to the Americas during the sixteenth to eighteenth centuries.

At 1001 km² in area, the country is roughly two times larger than Seychelles.

Considered one of Africa’s most stable and democratic states, São Tomé and Príncipe is a popular destination for those looking to explore the relics of the Portuguese colonization, together with its staggering natural beauty.

Its geographic location makes the islands an attractive stop-off point for exotic birds while offering plenty of opportunity for those looking for a little more adventure, in the form of the 2024 m-high Pico de São Tomé mountain. 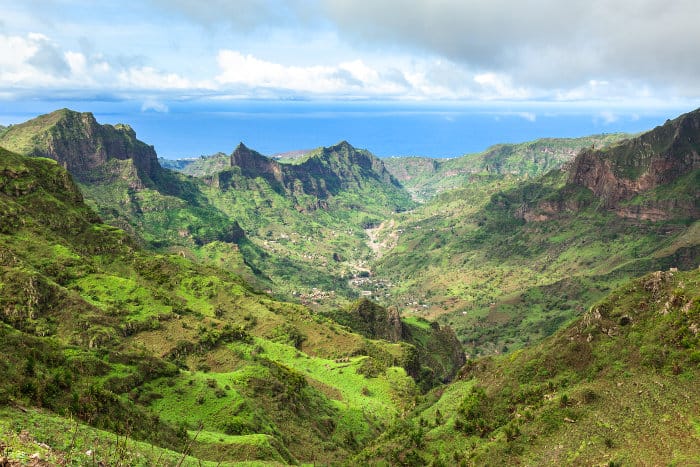 Check out the other smallest countries in Africa – they are dream island destinations direct from any travel bucket list.

There is Mauritius (2040 km² in size), a famous cluster of islets for a private island escape.

It is also known for having very wealthy citizens and, therefore, it can be expensive to travel here. Things to look forward to include rainforests, waterfalls, hiking trails and unique wildlife like the flying fox.

Comoros (2235 km² in size) offer something more distinctive in feel. Here you can go back to basics, however, getting to Comoros can be tricky and costly.

You will have to get used to traveling by boat as that is the only reliable way between islands. Expect beautiful volcano-shaped landscapes and picturesque mosques during your visit to Comoros.

Then there is Cabo Verde (Cape Verde) at 4033 km² in size. This small country in Africa is a place to connect with your wild side and sail into an Atlantic sunset.

This tropical paradise is known for its unique musicians and delicious cuisine, not to mention the white sand beaches.

Visit One of These Small Countries in Africa Today

There are so many wonderful and unique countries in Africa, be it the mainland or the island nations. If you are looking for unconventional places to visit, then The Gambia, mainland Africa’s smallest country, is perfect for you.

Although if you are someone who cares about political and geographical accuracy, then you should visit Seychelles. Seychelles is Africa’s smallest nation by land size.

You could also take a trip to one of the other small countries in Africa (which also happen to be island nations). Comoros, Mauritius, and Cabo Verde are some of Africa’s smallest countries.

Regardless of which small country you choose to visit, a great way to see Africa’s natural splendor is on an African safari. Go out and book your trip to the smallest country in Africa today! 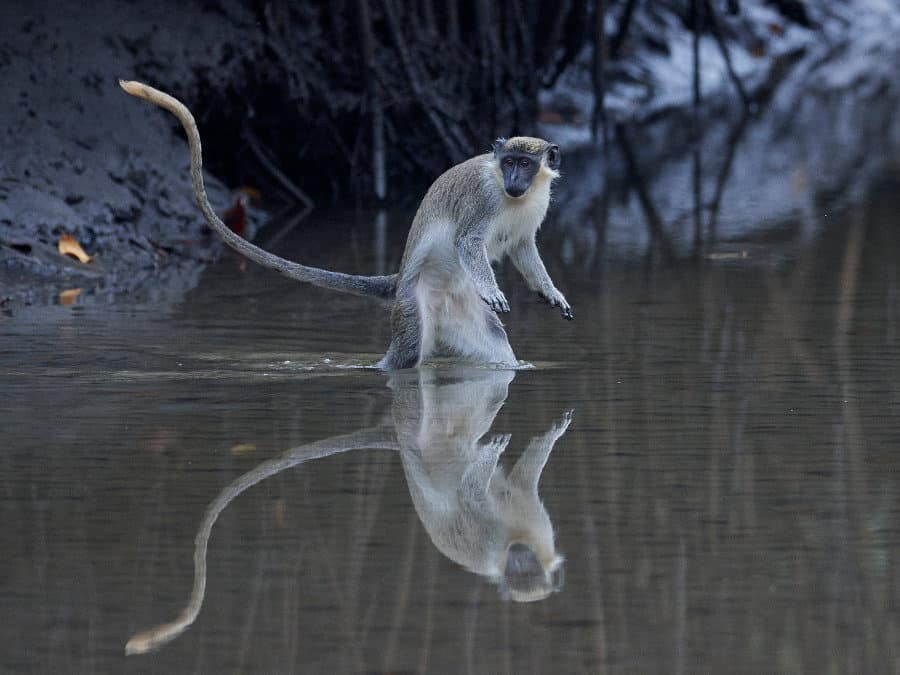 2 thoughts on “What is the smallest country in Africa?”