You’ll probably hear African elephants before you see them. The world’s largest land mammal (much larger than the Asian elephant) can still be seen in huge numbers, with 100,000 living around Botswana’s Chobe National Park.

Spotting one elephant is impressive; seeing a large herd is more common and more inspiring; being in a park with thousands of elephants is magical. These giant animals are constantly on the move and will walk straight past a safari vehicle. Their size also makes them really easy to see from a distance. 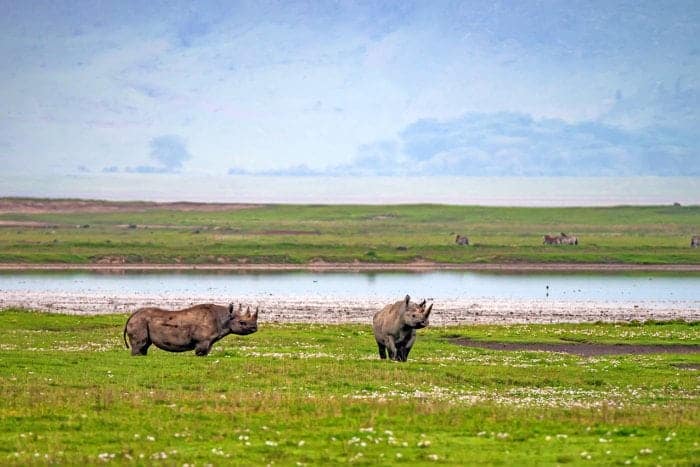 Rhinos are an emblem of African conservation. While the West points its fingers at poaching, most of the rhino population was wiped out by colonial farmers, because the rhinos ate crops that were introduced and had already destroyed the rhinos’ natural habitat.

Only around 1000 black rhinos remain, the smaller and shier of the two sub species. These are seen in small parks and reserves across East Africa.

White rhinos are almost twice the size and native to Southern Africa. Spotting them means being selective about your destination and going out early in the morning, when rhinos are most active. 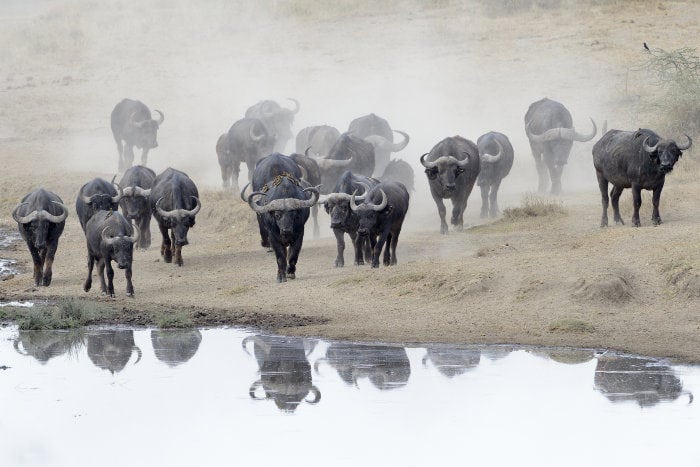 African Cape buffalo are nothing like the water buffalos of Asia. Cape buffalo are giants, big enough to maul lions and one of the most dangerous animals you can encounter. Female buffalo and calfs are relaxed, living in large harems dominated by one male.

Male bulls form bachelor herds that are boisterous and aggressive. While they may not be too pretty, encountering buffalos is very common on safari and you can only be impressed by their power. 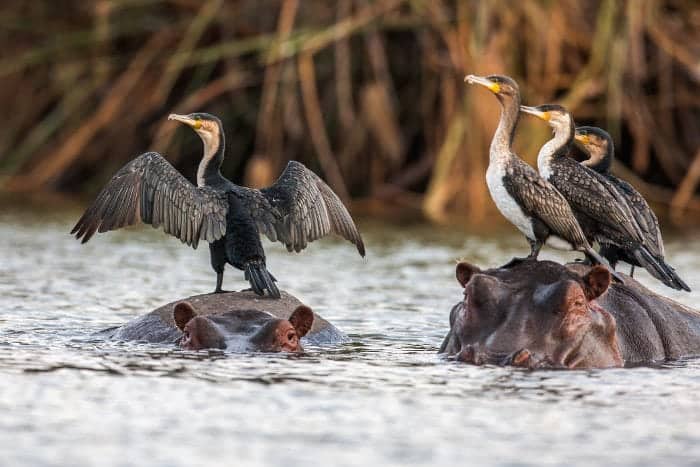 Aah hippos! They are famously portrayed as Africa’s cute animal, yet almost always rumbustious and grumpy. Hippos are one animal you don’t want to get in the way of; they cause more human fatalities than any other large African mammal.

So stay away from those iconic yawns and giant frames, especially when close to the water. Hippos spend most of the day in the water and guides know which pools and places they typically congregate.

It’s only towards sunset time that they emerge for their nighttime grazing, a sight that really impresses how big they are.

The world’s tallest land mammal provides beautiful moments on almost every safari. Peaceful and silent, giraffe are spotted around the fringes of woodland and savannah, standing like sentinels above the landscape.

Nine distinctive sub species exist although it’s very rare to see more than one of these at any one destination. For example, there are tens of thousands of Masai giraffe but Rothschild, reticulated and Thornicroft giraffe are critically endangered.