Reticulated giraffe are endangered and only around 8500 of these magnificent giants remain in the wild. Native to Somalia, southern Ethiopia and northern Kenya, they are a rare and precious sight on any African safari.

Or Sometimes Called, the Somali Giraffe 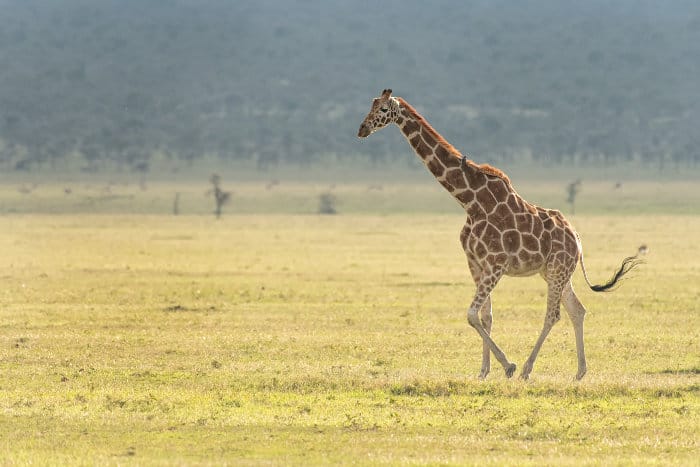 The reticulated giraffe is an endangered subspecies and sadly you’re more likely to find them in zoos than in the wild. A large proportion of giraffe living in zoos are this subspecies.

But while they can be seen in zoos all over the world, their numbers in the wild are declining.

What You Need to Know About Reticulated Giraffes 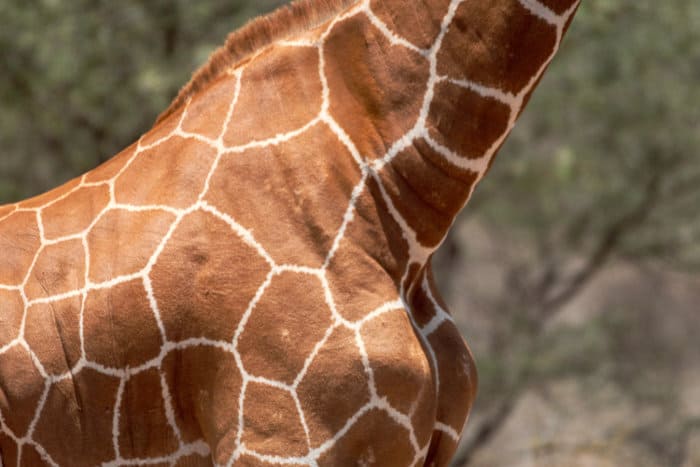 Reticulated giraffes have coats consisting of large, polygonal shapes. These really stand out because they are framed by a stunning network of shimmering white lines.

You’ll often read that these shapes are liver coloured, but liver seems an odd description for such a beautiful color. They can sometimes seem to even be a deep red and the patterns also cover their legs.

Each giraffe has a completely unique pattern of spots, much like a human fingerprint. The patterns are also much more than just pretty decoration or clever camouflage. Each and every spot is in fact a large blood vessel that branches off into a complex blood vessel system that lies beneath.

The sophistication of this seemingly decorative attribute is truly remarkable. When reticulated giraffes are experiencing extreme heat, they can send blood through the smaller blood vessels to the middle of each patch and cool their bodies. 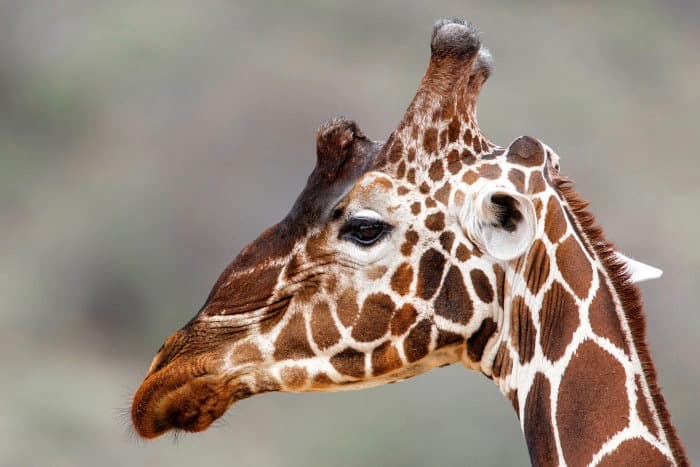 Look up and then look up some more as these animals can reach an awesome six metres in height. Their presence on the landscape is as iconic as African sunsets. Their necks are incredibly long, up to 3 metres and can weigh up to a whopping 220 kg.

The male reticulated giraffes will fight for dominance in their territory, ultimately a fight to mate with females. You’ll be forgiven if you find the “fight” between male giraffes funny to watch. They use their necks to hit a rival’s body and in the process interlace their necks. Like human wrestling, the objective is to destabilize the opponent’s body.

The weight of mature male reticulated giraffe is also rather impressive, between 1100 and 2000 kg! 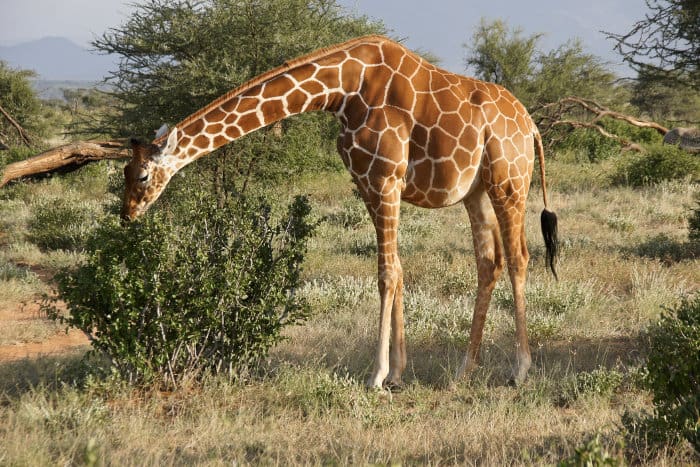 Falling a mere 30 cm short of their male counterparts, you’ll still need to look up and look up again to make eye contact with a female giraffe.

Reticulated giraffes are likely to breed between May and August and the female is ready to mate from around four years old. 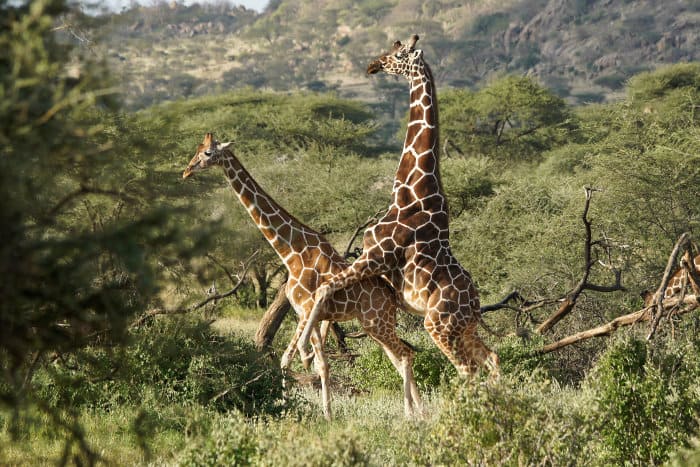 The female undergoes a gestation period of more than 450 days before giving birth to just one calf. Wow! 450 days in the womb and only one calf! That’s a sharp contrast to most other African animals, who have a shorter gestation and give birth to multiple babies.

However, there have been rare cases of twin calves, a revelation in the animal kingdom.

The female giraffe gives birth standing up and the newborn will stand immediately after birth. That is just one extraordinary fact about baby giraffe. Given the many reticulated giraffe predators, the ability to run at birth is a very good thing indeed.

Baby giraffe can fall up to 1.5m at birth and land head first on the ground. How’s that for a ‘welcome to earth’ moment?

Here are some at a glance facts on one of Africa’s most impressive giants. 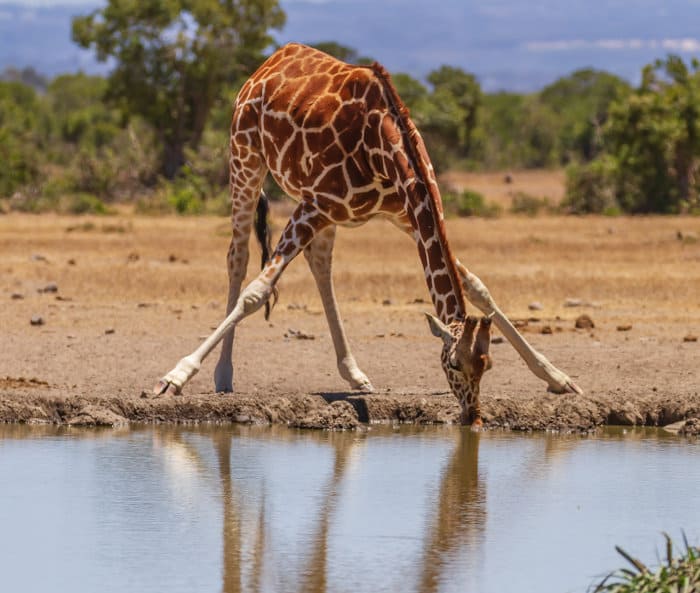 This is some coincidence as humans also have just seven bones in their necks. Say what? Yes, really. That neck that appears so long and so heavy, only has 7 bones. It is the reticulated giraffe’s super power!

Of course, giraffe neck vertebrae are far longer than those of humans.

They need to consume around 35 kg of vegetation per day

Drought is rampant in Africa and this makes it tough for plants to thrive. Yet, and this is where the super power comes in to play, a long neck helps these giant animals reach the tops of the trees. So they can feed from food sources inaccessible to other animals.

Nothing goes to waste. Leaves and vines are ripped off using an incredibly long giraffe tongue. Flowers and fruits are munched down all day, almost every day!

Reticulated giraffes can reach up to 56 kmph on a gallop 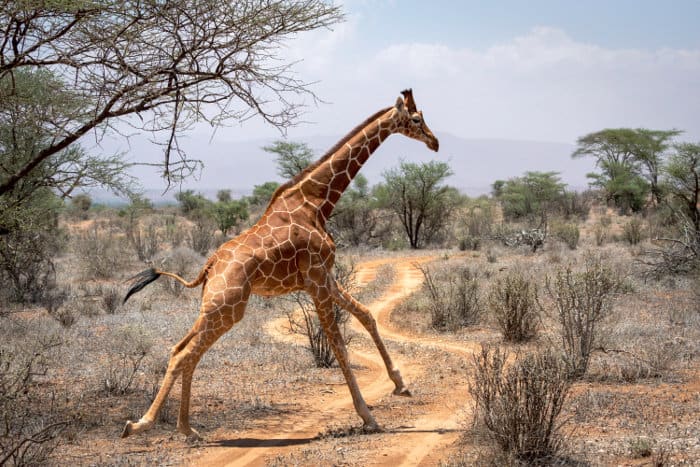 Wow – how fast can a giraffe run!

This is a very useful skill when being chased by a hungry lioness. Despite their clumsy appearance, the sight of these animals galloping is quite graceful. They can’t maintain this speed for long, but neither can their predators so it is usually enough to escape claws and jaws.

That’s a whole lot of water and very necessary as these animals can go for weeks without a drink. Their usual time frame for going without water is two to three days.

The reticulated giraffe will also get some water from the moisture and dew on the plants they eat. This helps to sustain them in the dry season. 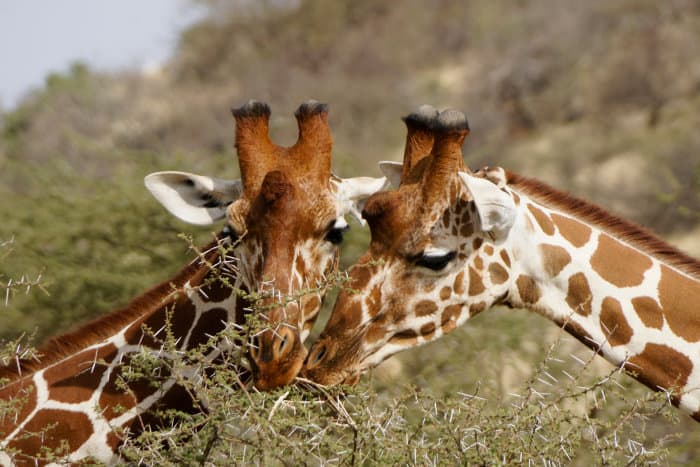 Their favourite food seems to be the acacia, which makes up to 40% of their diet, when they can get hold of it of course. These giraffe can eat over 100 different plants to consume their whopping 35 kg of vegetation each day.

Lake Nakuru National Park is a good choice for a Kenya safari as there are regular sightings of reticulated giraffe towers.

The number of reticulated giraffes remaining in the wild is estimated to be below 9000 and they remain endangered. 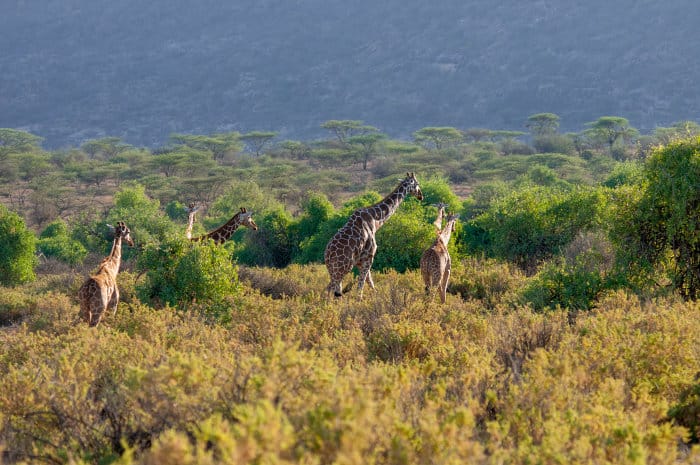 The limelight of recent animal conservation has been on the African elephant and rhino. Finally in 2018, the reticulated giraffe was added to the IUCN Red List as endangered.

This didn’t happen overnight. The systematic decline in reticulated giraffe numbers in the wild has been visible to those paying attention, for 30 years. There are some obvious reasons for this, such as loss of habitat and the increase of poaching, but conservationists don’t really understand why their numbers have been in such a steep decline.

Given their size it’s also surprising that their disappearance has almost gone unnoticed too. Perhaps it’s their minimal impact on the environment or placid natures. Maybe they blend into the landscape too well and people just assumed they would always be there.

The lack of scientific study around the reticulated giraffe is also quite baffling. Little is known about their behaviour, life span, or simply why their necks are longer than other giraffe.

The good news is that a number of recent initiatives have been implemented and these aim to increase the reticulated giraffe population.

To do better we need to know more. So an obvious course of action is to attach GPS trackers to these animals so their movements can be tracked. This provides valuable data and will go a long way to improve their chances for survival.

The Twiga Walinzi Initiative has pioneered the use of cameras on the known trails of reticulated giraffe. These feed back important and insightful information on behaviour and movement.

The Samburu, a local Kenyan tribe, are traditionally nomadic pastoralists. Through the efforts of the Namunyak Wildlife Conservation Trust, the community has been welcomed and encouraged to become involved in creating and managing conservation efforts.

Reticulated giraffe are essential to the savannah ecosystem 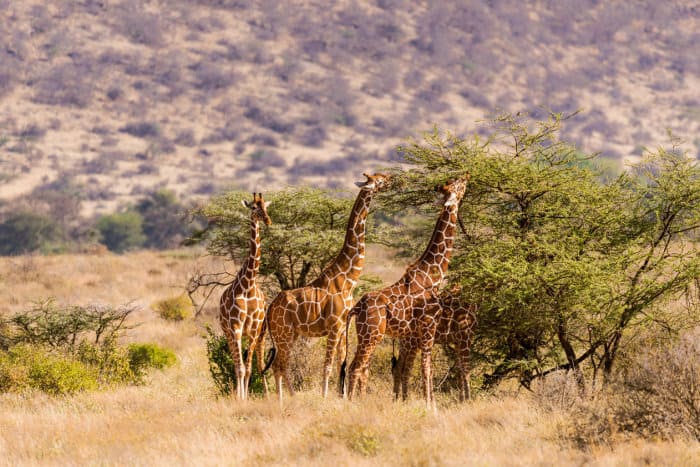 Some may wonder why it’s important to save reticulated giraffes, or any giraffes for that matter. These animals help to balance the ecosystem and support the survival of many other species.

Giraffe can reach vegetation that few other animals can. This helps to promote the growth of those trees.

One of the biggest hindrances in fighting the decline in numbers is the lack of data. Hopefully now that coverage has been extended, more funding can be released and more work can be done to better understand these magnificent animals. Before it’s too late.

Ha! Gotcha, there is no such thing! For some reason people seem to think that non-reticulated giraffes are a thing, but they’re not, so you can stop googling that now. Oh and tell your friends!

If you need more giraffe facts to impress others this article has you covered.

Social Structure of the Reticulated Giraffe 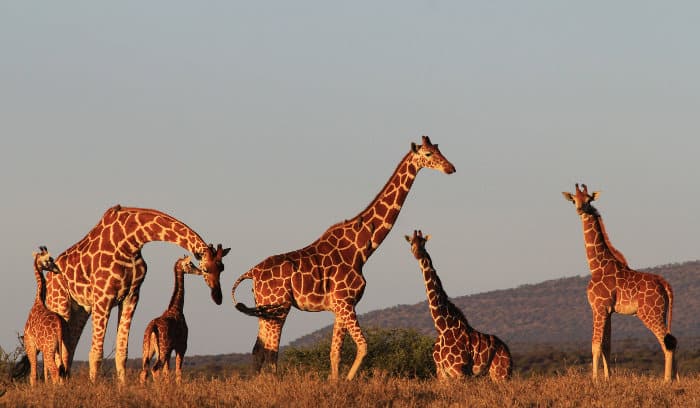 Reticulated giraffes are super social animals and you’ll see towers of up to 20 females with their young. Males will not hang around however, so around the 15 month mark, they’ll leave to join other males and form a bachelor tower.

By the way, tower is just one of the interesting collective nouns for animals you can learn about in this article.

The way giraffes communicate is also very interesting. Do you know the sound a giraffe makes?

Most of the communication between giraffes is done infrasonically, basically faint moans and grunts that are too low for our human ears to hear. Interestingly enough they will also make use of their eyes and make contact with one another to warn of potential danger. How smart is that?

Perhaps one of the lesser known physical attributes to the reticulated giraffe is their horns.

The horns are found in both the males and females. The horn is formed from ossified cartilage and over time becomes covered in skin and hair. So it’s known as an ossicone.

At birth the horns lie flat and are not yet attached to the skull of the giraffe. This is to avoid injuries, not only to themselves when they’re young, but also to their mother in the womb. It’s later in life that the horns start fusing to the skull.

The males have thicker ossicones and here is where they share something in common with human males. These ossicones often turn bald as they grow older. The reason for this is believed to be due to frequent necking, or fighting with other males.

The Reticulated Giraffe is Larger Than Life 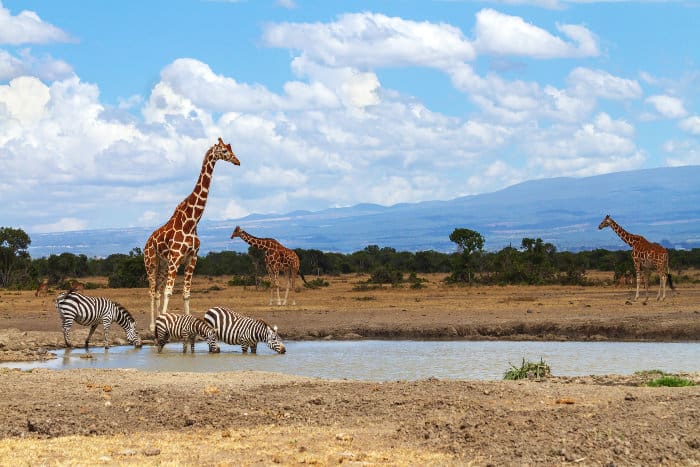 The reticulated giraffe is one of nine recognised giraffe subspecies. They are the tallest animals on earth and ironically take up so little room in our minds. The crisis point in their numbers demands attention.

Under 9000 reticulated giraffes remain but there is much hope for the future.

Tourism plays a big role in the sustained momentum needed to turn the decline in their numbers around. By going on an African safari you can help contribute to the survival of this wonderful species. 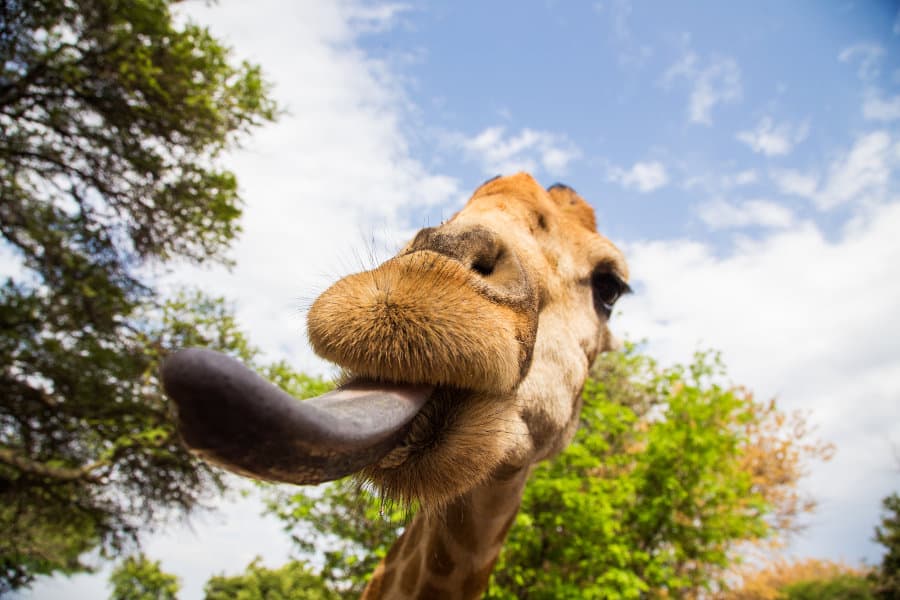