There are many fun facts about giraffes. Some are more obvious than others, like the fact that they are the tallest animals in the world. But you already knew that, right?

The great giraffe is a fascinating megafauna that holds an animal encyclopedia full of intriguing facts, some of which are hilariously unbelievable. These mesmerizing animals have several quirky traits that may surprise you.

Imagine an African safari without getting a glimpse of a giraffe above the treetops? It just wouldn’t be wild Africa without these gentle giants loping around the savannah.

So, let’s take a look at some fun giraffe facts before you meet on your next adventure.

Giraffes are elegant creatures: they amble around in the wild and bend down for a drink of water, admittedly with a little less grace. Here are 17 cool facts about giraffes to impress your friends.

1. Can giraffes bend their necks? 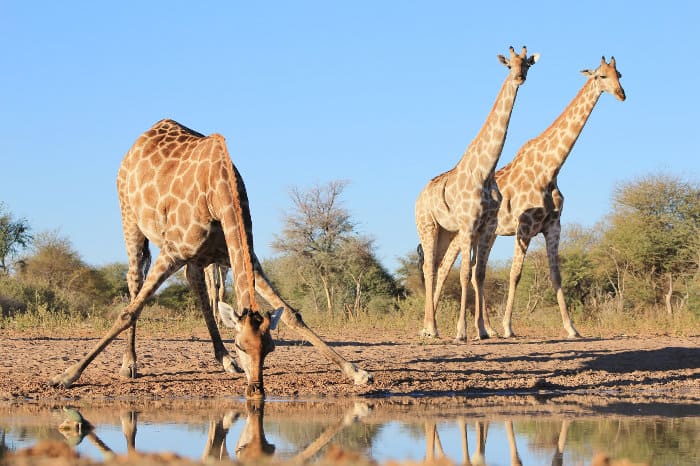 A giraffe neck is actually too short to reach the ground. Yes, that’s right, this mighty mammal with the longest neck in the world can’t reach the watering hole for a slurp.

Even worse, giraffes can’t simply bend their necks forward. They must awkwardly splay their forelegs and bend their knees before they can lower their necks to the ground for a drink.

Luckily for giraffes, they don’t need to drink every day like us humans. Giraffes only need to drink once every few days to survive the savannah.

2. The giraffe has a long neck with only seven vertebrae

The giraffe is the last standing land mammal to evolve a super long neck since its ancestors during the Jurassic period.

A male giraffe’s neck can reach almost three meters in length. Coming in at second place is the ostrich at one meter. No competition there!

What’s even more fascinating about their elongated necks is that giraffes still only have seven neck vertebrae. That’s the same number of bones as a human neck, except their bones are much, much longer than ours. 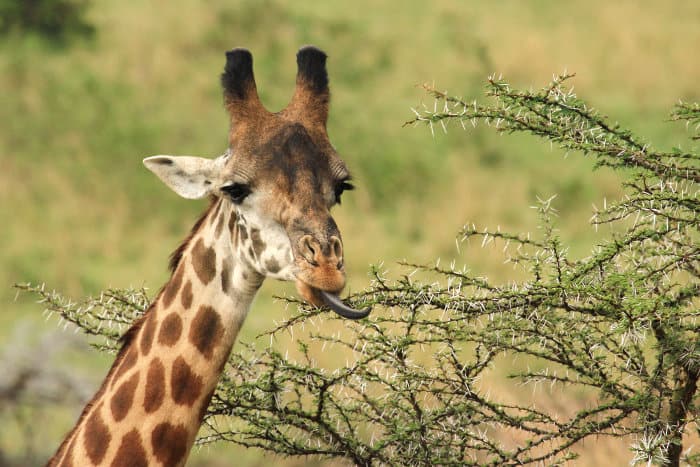 At a whopping 50 cm long, a giraffe’s tongue follows suit with its other lengthy features. Its deep purple color is due to dark melanin pigment.

As a result, there’s no need for the giraffe to get the factor 50 suncream out when licking around treetops for food all day long. The melanin provides the tongue with much-needed extra UV protection.

Did you know that giraffes lack upper front teeth? They have the same amount of teeth as humans.

However, one of the most interesting things about giraffes is that all 32 teeth lay on the bottom of its mouth and are mostly molars positioned right at the back.

Giraffes use their bottom teeth to grab a branch and then comb the leaves off. So when you see a giraffe without upper front teeth it’s not because of a giraffe brawl – that’s what evolution intended. 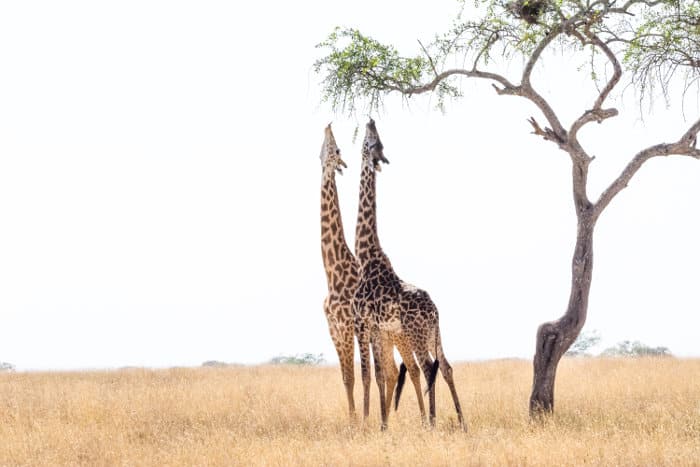 Giraffes stand at around 4-5 meters high, with the tallest giraffes ever recorded being up to 5.9 meters. That’s taller than three men standing on each other’s shoulders.

6. Giraffes have some of the biggest feet in the animal kingdom

Imagine going to your kitchen cupboard and pulling out a dinner plate. Well, that dinner plate is the size of a giraffe’s hoof, and what a heck of a hoof it is!

Many people aren’t aware of this fun fact about giraffe feet as the other humongous body parts can overshadow it, but they are also pretty mind-blowing.

With a diameter of 30 cm, their tremendous hooves are used to distribute their weight, preventing them from sinking into sand or marshy areas. 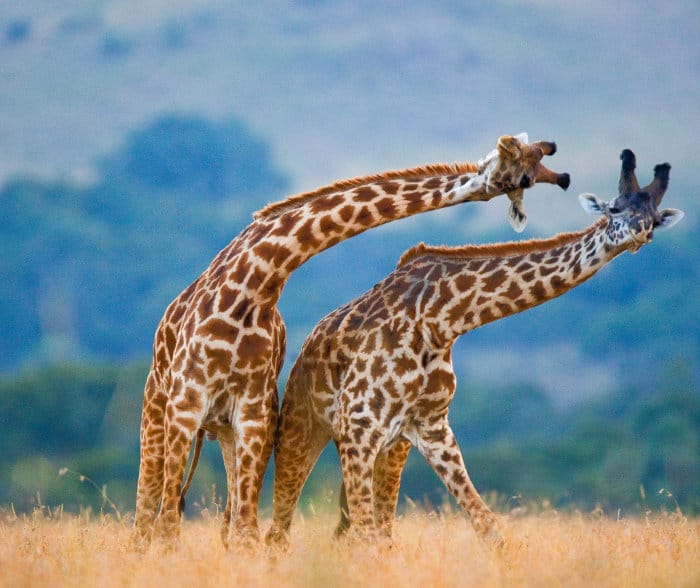 Both male and female giraffes have horns from birth. These actually lie flat on their heads and are not attached to the skull to avoid injury during birth. Did you know that these horns are called ossicones?

Another amazing fact about giraffes’ horns is that they can use them to defend themselves. Later in life, the ossicones will fuse with the skull and become formidable weapons, particularly in adult males.

Yes, that’s right, you can have a full-on snog with an endangered Rothschild giraffe.

If you are lucky enough to meet a giraffe, you must know they don’t like their heads being touched at all. So stay clear of patting the head of a giraffe. They won’t enjoy it as much as dogs do.

9. They are Greek gods of the animal kingdom 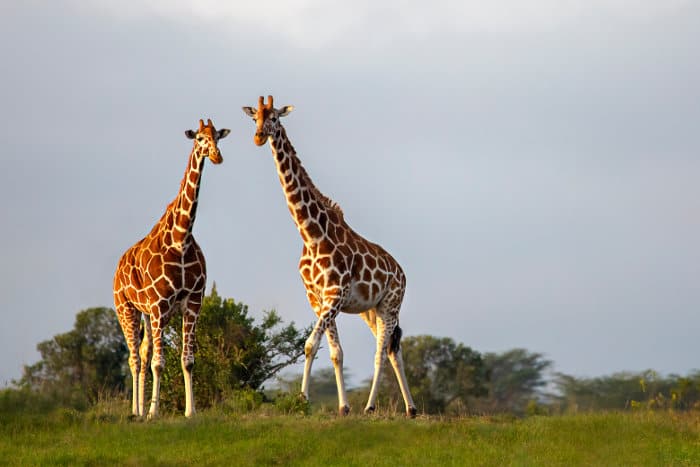 The common giraffe’s scientific name comes from the ancient Greeks, who believed the giraffe looked like a camel wearing a leopard coat. This is how their scientific name was born: Giraffa camelopardalis.

Giraffa camelopardalis! Is there any more appropriate scientific name in the animal kingdom?

10. Giraffes sleep when stood up

Giraffes in the wild rarely lay down to sleep, as this would make them vulnerable to predators.

Instead, the impressive gangly giraffe can micro nap while standing, just like horses.

Giraffes curl their necks around to rest on their hindquarters for a quick five-minute catnap. They can survive with just 30 minutes of sleep a day.

11. There are a few unique and weird things about giraffes’ mating season 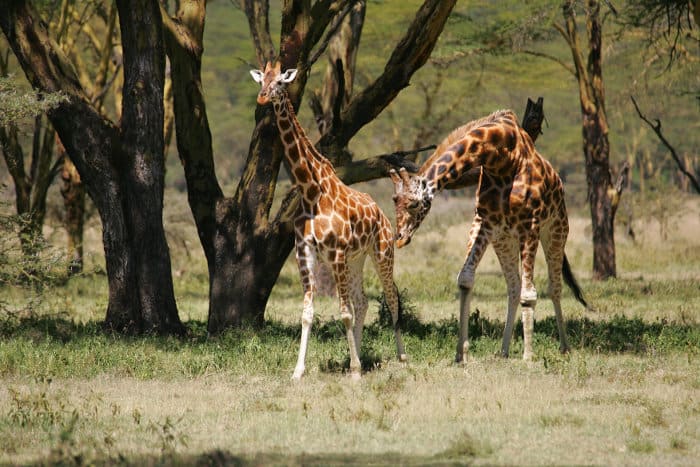 Isn’t it fascinating how all animals have their own special technique to lure a mate? The male giraffe doesn’t mess around when it comes to mating season.

The male giraffe gets stuck right in there and, using its 50 cm long tongue, grabs a taste of the female’s urine.

It’s graphic but true, and it’s not just for pleasure – it’s to determine whether or not they’re ovulating. If the female is showing some heat, the male giraffe will follow.

Amazingly, that’s not even the longest pregnancy on the African savanna. African elephants are pregnant for 22 months and rhinos for 16 months.

After a long 15 month pregnancy, the giraffe will stand up to give birth to their baby.

The baby giraffe would be crushed during birth if they were to lay down. As a result, poor baby giraffe enters the circle of life with a mini skydive as it falls about 2 meters to the ground.

This article about baby giraffes has 22 facts about Africa’s cutest newborn, including why they need the dramatic head-first drop. 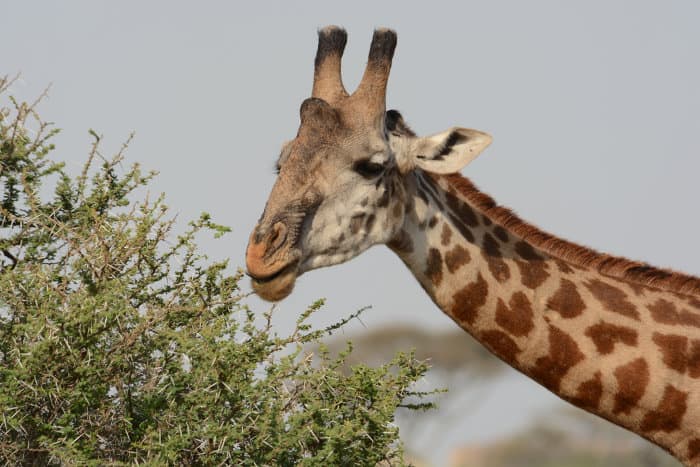 One of our favorite giraffe fun facts is that they are beautiful pollinators to many plant species.

Their great height and super long treetop feeding tongues allow them to transfer genetic material onto their mouths, from one flower of a tree to another. How fascinating is that! What a way to contribute to the African circle of life.

Giraffes are essential in this pollination because they have evolved to feed from branches that other animals cannot reach. So without the giraffe, some trees would struggle to spread.

Giraffes are known as browsers and enjoy exclusive VIP access to the freshest leaves from the tallest treetops.

Despite its impressive size, the giraffe diet is plant-based. Giraffes enjoy munching on acacia, mimosa, and wild apricot trees.

Their elongated neck helps them reach the tallest trees. These trees tend to have deep roots that can suck up more water content. So a giraffe can quench its thirst through its choice of food.

Giraffes have access to parts of the trees that provide the most essential nutrients. This gives giraffes an advantage over other herbivores, and means they do not compete for food with any other animal. 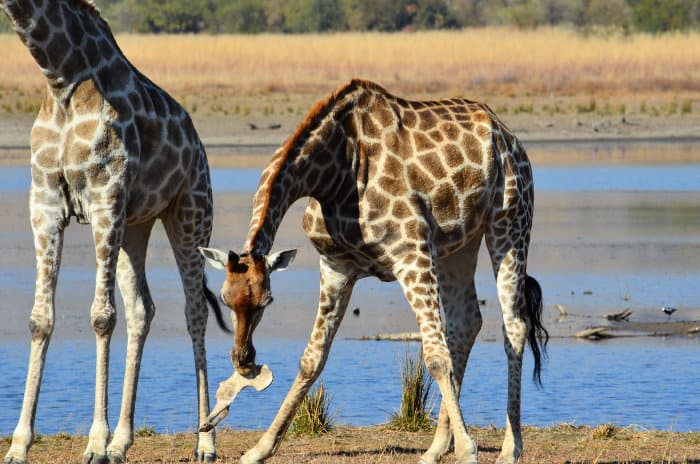 Do you know this fun fact about giraffes? They lick and chew the bones of other animals.

It’s not easy being a vegetarian, that’s why you may not be surprised to know that the giraffe has observed osteophagy.

Giraffes aren’t predators, so they don’t kill other animals, but their skeletons do require more calcium than they can get from plants.

A baby giraffe is extremely vulnerable to predators, especially hyena. The vicious animal will hunt in a pack as it can’t manage a solo kill due to the giraffe’s size.

The only animal on the savannah to take a chance on hunting an adult giraffe is a lion.

When a giraffe is drinking at the watering hole, it is most vulnerable because its neck is at lower ground. This makes it difficult for a giraffe to spring back and flee if there is an attack.

However, a lion would have to be pretty brave to tackle a giraffe in the first place. The size of an adult giraffe compared to a lion is striking, and if a giraffe gave one kick from its powerful leg, it could easily end a lion’s life.

It’s not a fun fact about giraffes, but this is the most important giraffe fact you need to know. Wild giraffes are sadly declining, mainly due to habitat loss caused by increasing agriculture. People still poach them for their tail hair, pelts, and meat.

Giraffes are now extinct in eight African countries where they previously roamed, including Guinea and Mali. Today, you can only find them in sub-Saharan Africa. They are also a vulnerable species on the IUCN list.

There are many conservation groups leading and supporting the wild giraffe to ensure their survival. Hopefully, we will not see the great giraffe become extinct like its long-necked Jurassic ancestors.

Delight a Friend with One of These Funny Giraffe Facts

Now that we’ve discussed these graceful giants’ unique characteristics and behaviors, did you learn anything new?

There are many fascinating things to discover, from awkward giraffe knees to their dinner plate feet. So next time you’re with friends, you can surprise them with interesting facts about giraffes that no one knows.

Or why not plan an African safari trip, so you and your loved ones can see the majestic giraffes in their natural habitat. These elegant animals are undoubtedly a sight to behold. 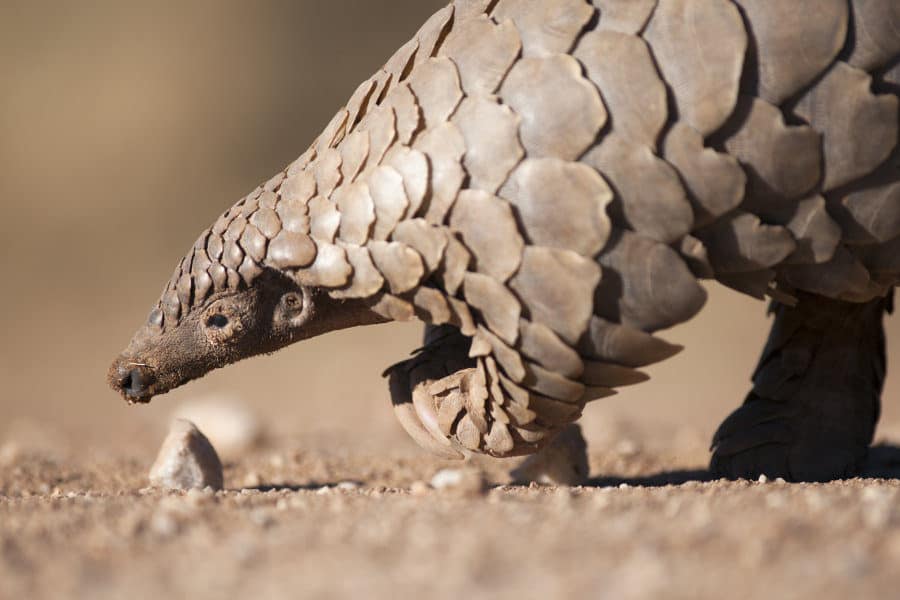