Is an African civet a cat? Is it a raccoon? No – this creature is in its own category.

The secretive civet is overlooked, underappreciated, and sometimes even persecuted. It’s not as well-known as many African animals, but it could certainly compete for the title of “weirdest looking.”

While it doesn’t get the attention of Africa’s more majestic mammals or cute critters, there are plenty of fascinating African civet facts that will help you learn more about this species.

What is an African Civet? 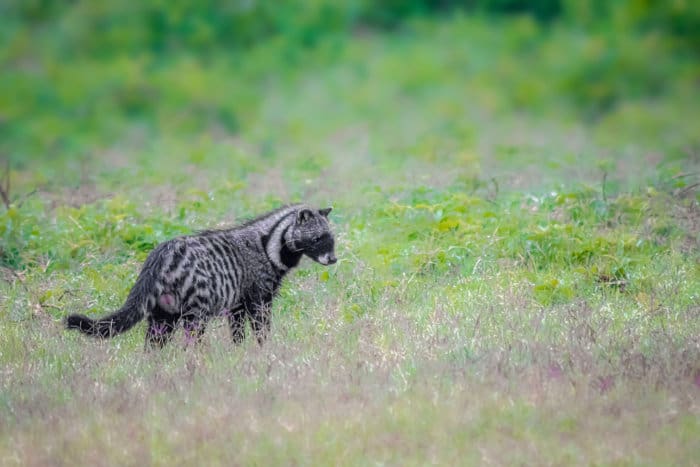 African civets look like they’ve been stitched together from parts of other animals. A masked face, dorsal crest, and large hind legs make for a confusing sight.

We know that it isn’t a cat, though its spotted coat and long tail wouldn’t look out of place on a feline. Despite some facial similarities, it’s not closely related to the racoon, either.

So, what is an African civet? Well, it’s a viverrid.

Does that help? No, probably not.

Viverrids comprise 33 species of mammals in the family Viverridae. While they’re not cats, they do have some cat-like characteristics. Viverrids are in the suborder Feliformia – the ‘cat-like’ carnivorans – but are more closely related to small carnivores like mongooses than true cats.

The species in this family are mostly found in Asia and Africa, with a small population in Southern Europe.

Common characteristics include four or five toes per foot, a rough, prickly tongue, and a pouch or gland near the anus. Their snouts are longer than a cat’s, while their legs are shorter. 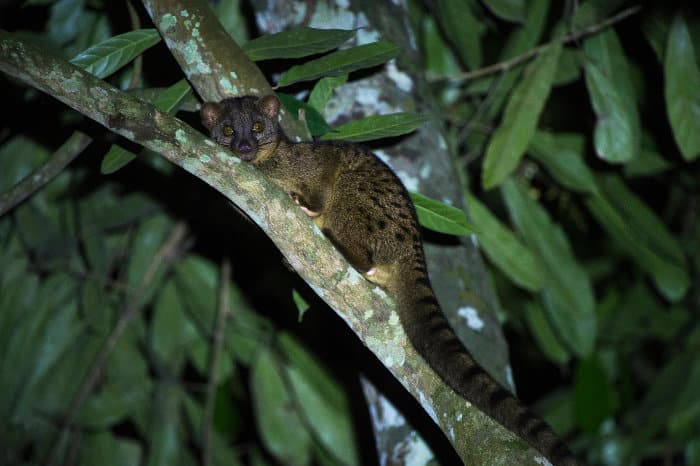 African civets are one of the largest viverrids, and the only species in the genus Civettictis. Other African viverrids include several species of genet, and the even more mysterious linsangs.

Be careful of mistaken identity – there’s a species called an African palm civet which isn’t a viverrid at all.

African civets can reach up to 84 cm in length, with a tail up to 47 cm long. Average weight varies from 7 kg all the way to 20 kg, making them Africa’s largest viverrid. No match for a large apex predator, but a scary sight for small animals on their menu. 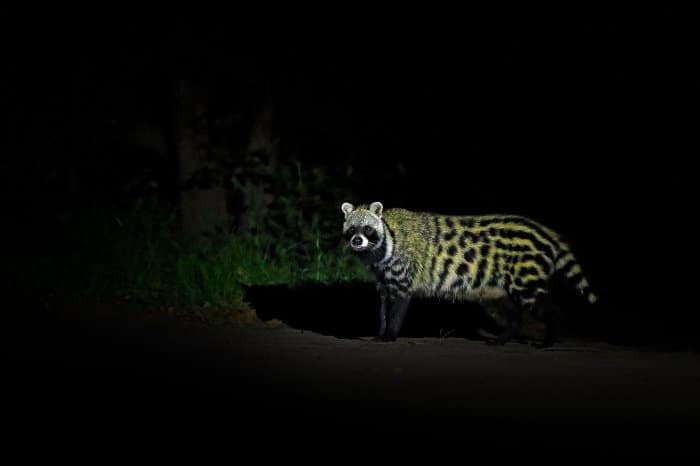 What does an African civet eat? Almost anything it can get its paws on! It’s an omnivore that loves to snack on rodents, amphibians, reptiles, and insects, as well as eggs, fruits, seeds, and berries. Civets also chomp on carrion if they can find it.

African civets are nocturnal hunters and are most active shortly after dark.

Where do African civets live?

African civets are from – you guessed it – Africa.

More specifically, they live in the savannas and forests of southern and central Africa. They’re found in most countries south of the Sahara, as far down as northern South Africa.

African civets mainly avoid arid areas, preferring tall grass or thickets in which to safely rest and hide during the daytime. They also like to live near permanent water sources. 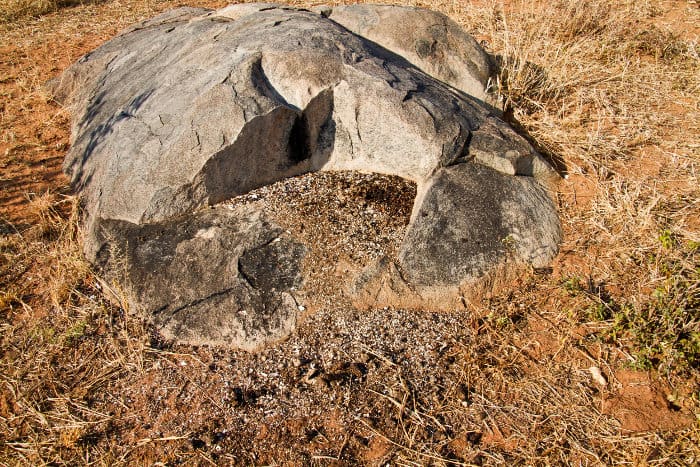 African civets are quite secretive creatures and little-studied compared to many species. You’d think these odd-looking animals would stand out, but their solitary, nocturnal nature means civets are still mysterious mammals.

They’ll sleep for most of the day, hidden in the grass, but come out shortly before sunset. On overcast days they might appear during daylight, but prefer to hunt, forage, or occasionally scavenge food under cover of darkness.

The civet’s camouflaged coat, with an array of spots and stripes, helps it hide in the undergrowth or stalk stealthily through forests at night.

Personal space is important to an African civet. They mark their territories with a pungent perineal gland secretion near their poop piles. (More on their signature scent later.)

Poop piles? Yep. Civets deposit feces in large piles called latrines, middens, or even “civetries”. These contain the remains of meals including insect exoskeletons, fruits, and seeds. A scent-marked civetry tells other members of its species to stay away.

Want to know a funny African civet fact? Their most common vocalisation is a “ha ha ha” sound they use to make contact with other civets.

OK, maybe it wasn’t so funny. 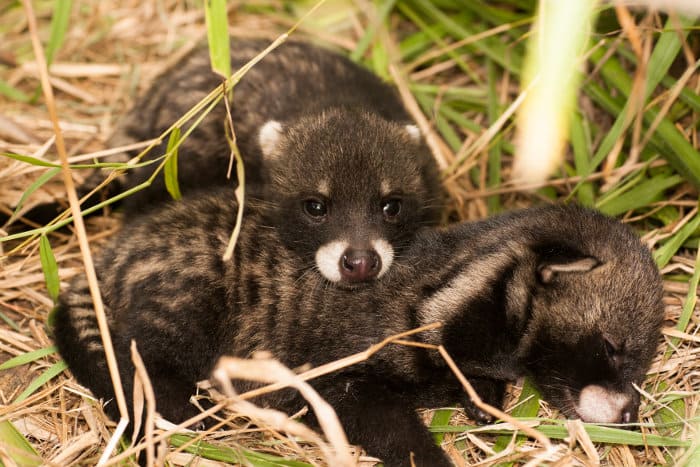 Civets can’t be solitary all the time, at least not if they want to make more civets.

They mate during the female’s estrus cycle, and breeding seasons vary based on location. Civets in southern Africa breed during August to January; in Tanzania and Kenya it’s March to October. In West Africa there’s no specific breeding season.

Females are polyestrous, meaning they can breed several times a year. They’ll have two or three litters a year, with one to four young in each litter.

What is a baby civet called? That’s a good question! Like many African civet facts, the answer is hard to find.

What about other “cat-like” animals in the suborder Feliformia? Of the civet’s relatives, hyenas have cubs, while mongooses have pups.

Cub, pup, or just “baby civet”? Whatever you call them, they grow up quickly. Civets spend their first couple of weeks hidden in a nest with their mother, but soon start exploring and are already hunting their own food by their second month.

What about civet poop coffee? 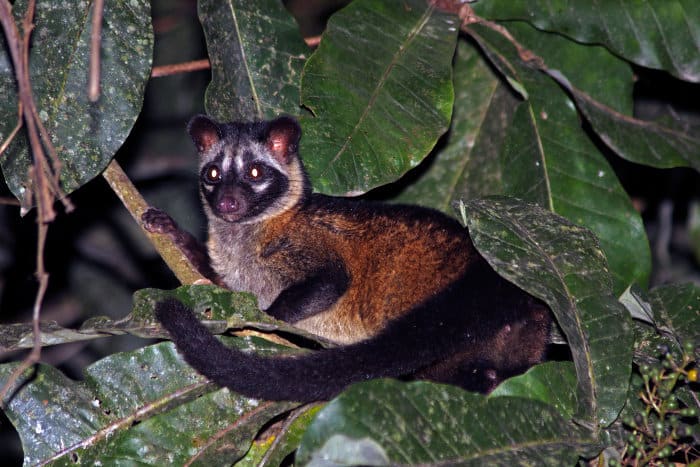 There is coffee made from civet poop – called kopi luwak and often known as “the world’s most expensive coffee”.

It’s an interesting fact, albeit not an African civet fact, because this coffee is made from a different species’ feces.

Kopi luwak is made from partially digested coffee cherries, collected from the droppings of the Asian palm civet. The strange beverage supposedly has a distinct taste. It certainly has an eye-watering price tag of up to $100 a cup of wild-collected beans.

Sadly, civets haven’t benefited from the drink’s popularity. Many are now kept in captivity and force-fed coffee berries, as the drink has gone from rare specialty to tourist trap. 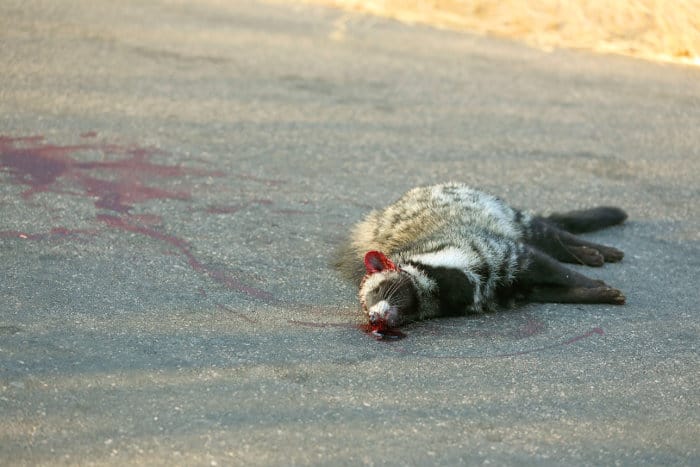 African civets are widespread and classified as “least concern.” That doesn’t mean things are plain sailing for this civet species, which has been targeted by humans.

Despite being widespread in Africa, the civet’s secretive nature means it’s hard to know population numbers. Scientists believe that hunters kill several thousand civets per year in the forests of Nigeria and Cameroon, and that African civets suffer localised population declines.

Farmers aren’t their biggest fans, either, since they sometimes raid hen houses or even take young livestock.

It’s not just humans that spell danger. Other African civet predators include big cats like lions and leopards, crocodiles, and even large snakes.

With its powerful jaws and stocky stature, the civet would be a tough meal for most animals.

If that doesn’t deter them, the civet tries to intimidate its foe. When it feels threatened, it raises the fur crest on its back to try and appear larger.

While the civet uses scent markings to stake its territory, humans have found another unusual use for its scent glands – perfume.

It might not sound appealing, but some of the world’s biggest names in the perfume industry have used civetone in their products. In its original form it can be quite pungent. When diluted, though, it smells quite pleasant.

Is the process humane, ethical, or at least tightly regulated? No, on all counts.

In many countries, hunters capture African civets alive and keep them in cages, scraping the secretions from their perineal gland. This is as unpleasant as it sounds for the civets, which rarely live long.

Hope for the future

Many brands are moving towards synthetic civet musk. Chanel, for instance, said they switched in 1998.

Yet this practice continues in many areas with a lack of regulation. Hopefully, the trend towards synthetic musk continues and civets can be left in peace.

See an African Civet for Yourself 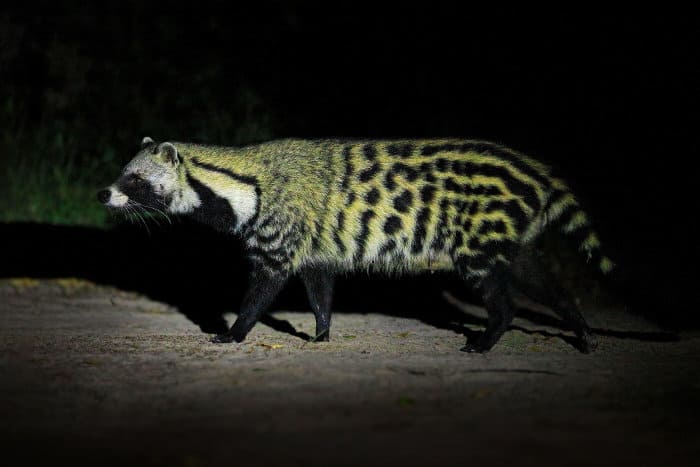 Given its nocturnal nature, you probably won’t see the African civet during the day. But a night drive opens up a whole new world of possibilities.

From familiar faces like lions and leopards, which are often more active at night, to shy nocturnal species, you’ll see (and hear!) a whole new side of Africa.

Who knows, you might see the secretive African civet, or one of its smaller relatives like the genet. Be sure to check which destinations offer night drives, as it’s not always an option.

If you’ve enjoyed these African civet facts and want to see these animals in the wild, you can plan a custom safari around your interests.