If there’s one animal that truly captures the essence of Africa, it is the lion. Lions are one of Africa’s most iconic animals. Admired throughout history, these large cats serve as a symbol of bravery and strength.

Lions have powerful bodies. They are the second largest cat species, after tigers.

In addition to their large size and sheer strength, the lion population is also renowned for its impressive eyesight. This is an advantage for their predominantly nocturnal hunting.

There are several reasons for the lion’s excellent vision. Below are ten interesting facts about lion eyes – one of their greatest hunting tools.

Much like crocodile eyes, a lion’s eyes serve as an exceptional piece of equipment.

A lion’s eyes help them hunt, especially at night.

Let’s take a deeper look into the eye of the lion. 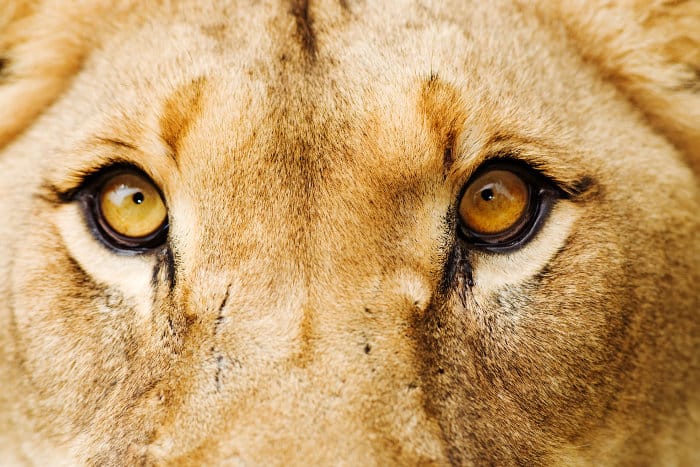 The rods aid the reflection of more light into the eye, while cones are for color vision. This is what contributes most to the lion’s impressive nocturnal vision. These large cats can see 6 to 8 times better than humans in low light conditions.

Regarding cones, there are three types – namely blue, yellow, and red. Lions, like all cats, only possess the cones for short waved light (blue), and medium waved light (yellow). They cannot distinguish red colors.

If you’ve gone game viewing at night, you may have noticed some glowing eyes looking back at you.

Lions, like most nocturnal animals, have something inside their eye known as tapetum lucidum. This is a reflective layer of cells behind the retina which acts as a mirror.

The rod and cone cells absorb light entering the eye. The tapetum lucidum reflects the light which passes through the retina and photoreceptor cells.

This gives the lion’s brain two chances to absorb the light waves and refine the image. This significantly improves the animal’s night vision. 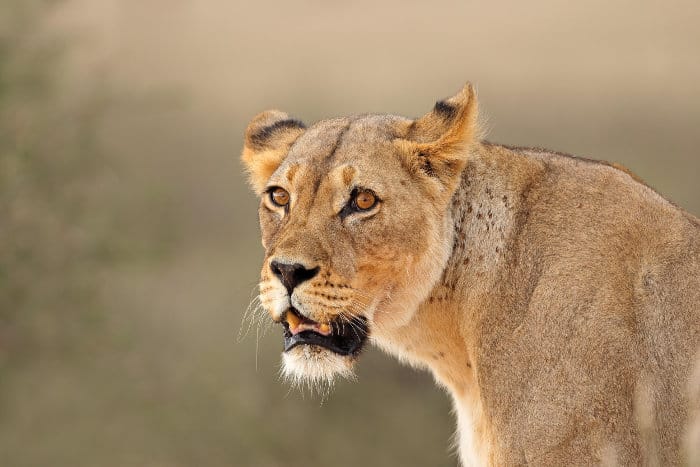 The outside characteristics of a lion’s face play a significant role in its incredible night vision.

The white stripe under its eyes helps reflect faint light into the eyes, making it easier to see under low light conditions.

This unique feature is a good indication that lions are nocturnal.

If you look at a cheetah, you will notice they have black tear-like markings. This reduces glare, which is ideal as these quick, spotted cats tend to hunt during daylight.

4. Lions have a second eyelid

Lions have a second eyelid known as a nictitating membrane. This serves as an extra layer of protection for the cornea.

It also moistens the eye while maintaining vision.

The nictitating membrane acts as a windshield wiper, removing dust and anything else blown into the lion’s eye.

5. Lions have round pupils 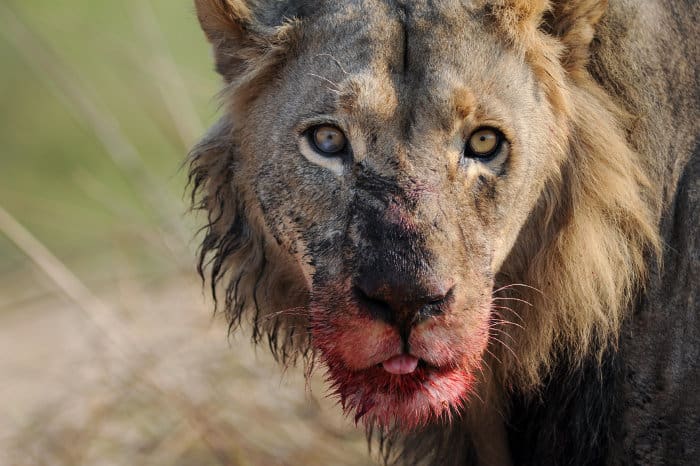 Most felines have vertical slits instead of round pupils. This is to maximize the capacity of recognizing the depth of a field.

Smaller cats need to crouch to get close to their prey before pouncing. Vertical slits are important as they help these cats measure shorter distances precisely.

Larger felines, like lions and tigers, have round pupils.

As they have longer legs, their eyes are at a greater distance above the ground. They are also a lot more powerful and can jump much further.

Lions do not need to get too close to their prey before pouncing and do not require a vertical pupil.

The round pupils possessed by larger felines are also known to allow more light to filter into the eye, giving them better night vision.

6. What color are lions’ eyes?

As previously discussed, the anatomical structure of a lion’s eye is responsible for the eye shine we often see when game viewing at night.

The typical color of this eye shine is a red or gold hue. This can vary depending on the angle at which one views the lion. 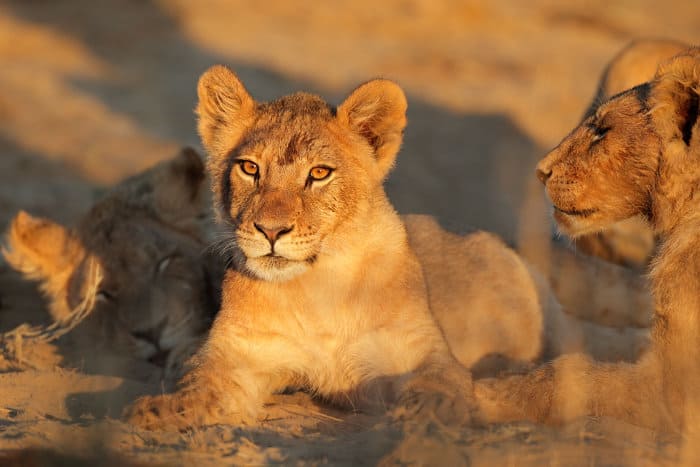 Baby lions, referred to as “cubs,” are born blind. They do not begin to open their eyes for the first 3 to 4 days after being born. Even after opening their eyes, they cannot see very well and need extra care from their mums.

Their eyes start out blue-grey and begin turning brown or amber around the 2- to 3-month mark.

Given their impressive night vision capabilities, lions generally hunt at night. By using their vision, lions hone in on their target, coordinating their attack based on where they see their prey moving.

In a hunt and evasion scenario, sight is the most crucial factor. Lions’ prey also possess strong senses such as sight and smell, which helps them escape.

Dodging obstacles and handbrake-turning past members of a lion pride makes certain prey tougher to catch.

The key to a lion’s hunting success lies in having the conditions skewed in their favor. This is most commonly at night, long after the sun has set, and when everything has become completely dark.

Lions also hunt well during storms as the noise and wind make it harder for their prey to hear or see them.

9. The full moon can hinder a lion’s vision 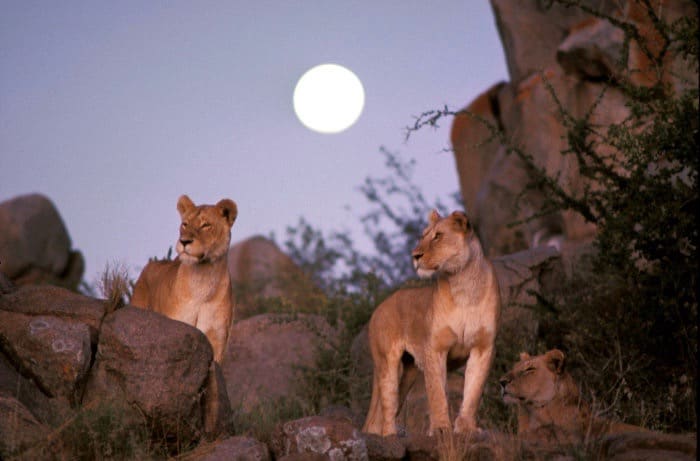 As examined earlier, the darker it is, the better it is for lions. A full moon makes it easier for prey to detect and escape predators.

During a full moon, lions will often put off hunting while the moon is at its peak. They will much rather wait until the moon begins to dip over the horizon or until clouds have covered it.

Unlike much of their prey, lions have binocular vision. This suggests that their eyes point forward, allowing them to judge depth more effectively. While this is a great advantage, their eyes cannot move from side to side very quickly.

Lions have to move their entire heads from side to side to see in different directions. On the other hand, their prey has eyes on the sides of their head.

This provides their prey with a wider range of vision. It also hinders their ability to resolve single objects after dark.

For this reason, when night starts closing in, these animals move out into open clearings for increased visibility and room to move if need be.

In addition to their unique eyes, lions have many other characteristics and traits that are sure to impress you.

Below are a few mind-blowing facts about one of Africa’s largest cats.

Lions can get their water from plants 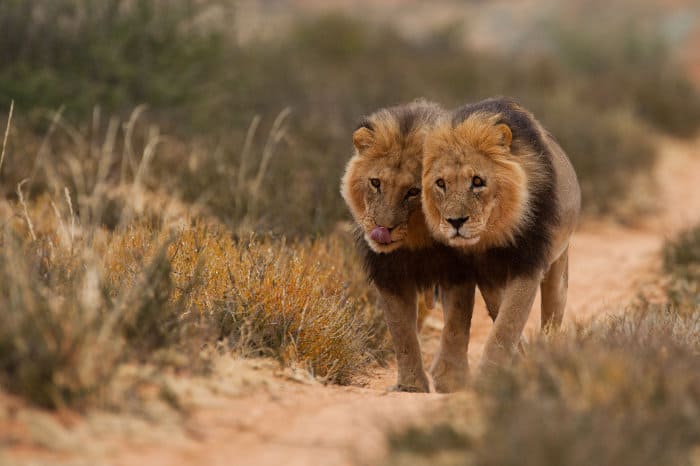 Lions are highly adaptable and can survive in very dry areas. In places like the Kalahari desert, they get most of their water from their prey and plants such as the tsamma melon.

These large felines can consume up to 40 kg of meat in one meal, which is generally a quarter of their body weight.

To assist them in scraping flesh off the bones of their prey, they have tongues with sharp, pointed rasps, papillae.

Here is more information on what lions eat. 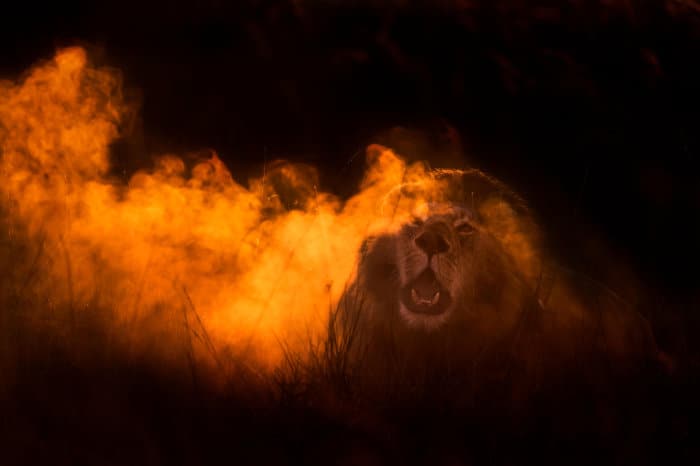 Unlike other cat species, lions roar together, often to mark their territory.

A calling typically goes on for about 40 seconds.

The entire pride joins in, including the younger cubs with their tiny mews.

Lions are quick and powerful

These large cats can run short distances at 80 km/h and leap as far as 11 meters.

This, coupled with their impressive vision, makes them one of the top predators of Africa. 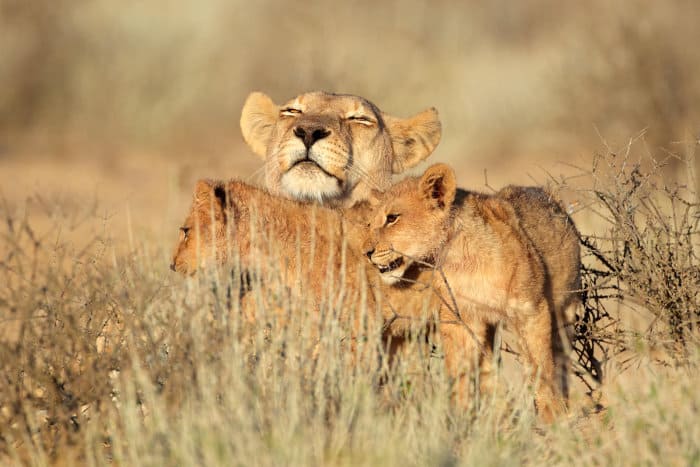 Lions enjoy lazing around. These big cats spend 16 – 20 hours sleeping each day. They have few sweat glands and conserve their energy during the day.

They are much more active at night when it’s cooler. This is also when they hunt.

For more on these magnificent animals, check out these 10 interesting facts about lions.

What Are Your Thoughts on the Lion Eye?

Lion eyes are an incredible tool and are largely why lions have a relatively good hunting success rate. In sheer darkness, where most of us would find ourselves lost without being able to see a thing, lions move with ease.

While their eyes are highly functional, they are also beautiful with their brown-amber color.

For your next game ride, consider heading out after sunset. It is then when these large cats are most active.

It is also when you will notice their shining eyes.

If you wish to see these large cats up close, be sure to check out these amazing African safari deals.