Lions are a symbol of wild Africa, majestic animals that showcase power and beauty. Seeing one in the wild is one of a safari’s ultimate highlights.

Yet these animals can be misunderstood. For all their wild splendor, lions are often described by people who have never even visited Africa! Which, of course, can lead to some confusion.

Here we hope to clear up some of the common myths as we provide 10 interesting facts about lions.

There is much to learn about lions, even for the veteran safari lover. Perhaps it was the classic movie, ‘The Lion King’ that first piqued your interest. Or the wonderful wildlife programmes that bring the wilderness into our living rooms.

Whatever it was that first interested you, you’re sure to have mulled this animal over a few times.

These 10 lion facts will arm you with the necessary knowledge to answer all your own questions.

Are lions the kings of the jungle? What kind of sound do they make? How often do lions hunt?

If these are the questions that keep you up at night, get ready for a deep sleep as you learn more about lions below.

1. Lions don’t live in the jungle 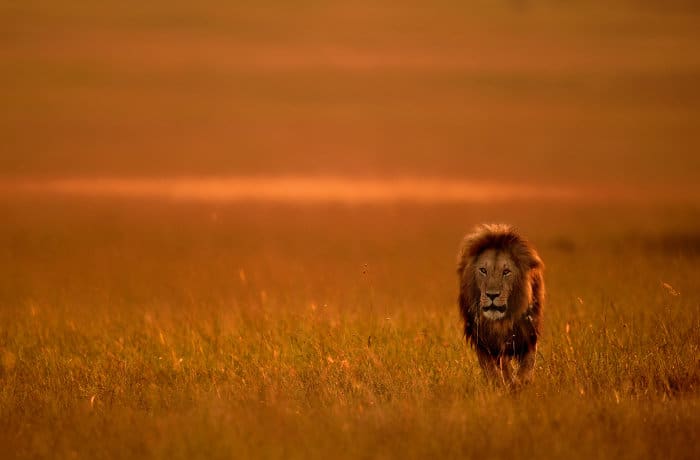 “In the jungle, the mighty jungle, the lion sleeps tonight.” Erm, actually it doesn’t. Lions mostly live on grasslands and savannah. Sometimes they inhabit forest, shrubland and desert. But never the jungle.

What a shocking statistic! And this near 90% drop in the lion population has occurred in a little over 100 years. This is really one of the saddest facts about lions.

Yet in some places these majestic predators are still hunted legally. Legally! 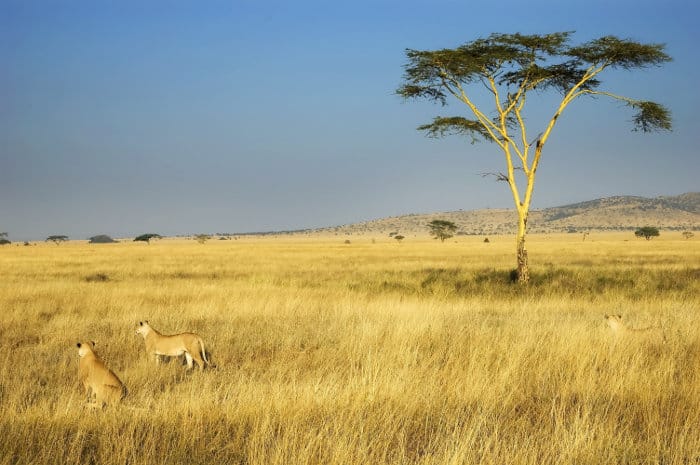 It wasn’t that long ago that lions were classified as an animal of least concern. The king of the savannah didn’t have any predators. Then cowards and colonialists turned up with guns.

The IUCN reports a continuing decline of mature lions. So while they are not yet an endangered African species, they are on the vulnerable list. At this rate our next generation won’t even have the opportunity to see these animals in the wild.

4. Lions are extinct from 26 countries they previously roamed

Lions are also believed to be extinct in a further seven African countries, including Ghana, Guinea, Mali, and Togo.

These magnificent cats once roamed through all of Africa, along with parts of Asia and Europe. They are now restricted to East and Southern Africa, with a handful of individuals in West Africa and India’s Sasan Gir National Park. 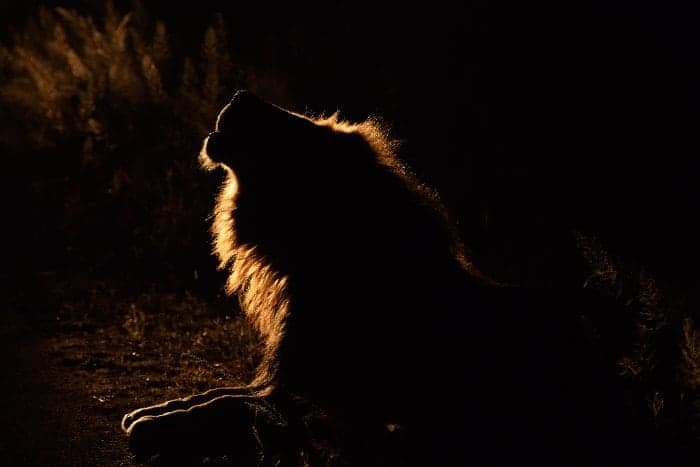 A roar is a sign of dominance, so the louder the better as far as lions are concerned. Lions use these impressive roars to warn rivals and show off how big and bad they are.

This is one of the great sounds you can hear on a safari and it really echoes through the night. Males have a deeper roar than the lionesses (consider this a bonus fun fact about lions).

The incredible roar is caused by a ligament in their voice box. This ligament is stretched to enable more air to pass across the vocal cords, making the incredibly deep and loud sound that is synonymous with lion power.

Note that this ligament is only found in the biggest cats – lions, tigers, leopards and jaguars. So it is only these animals that can roar, and the cat in your living room doesn’t stand a chance.

Lions make an incredible variety of sounds. Low-pitched grunts are commonly heard on a safari while individuals communicate through moaning, huffing, and humming.

They also purr, although some say this isn’t a true purr as it is only produced on the exhale; domestic cats purr continuously, on the inhale and exhale of breath.

Baby lions make a sound that is just like a meow but is really a feeble first attempt at roaring.

Read all about the sounds a lion makes here. 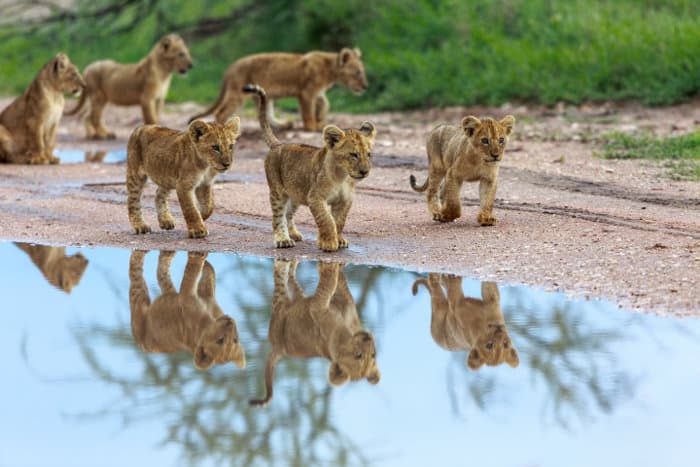 How cute is this fact about lions?

A tiny lion cub is so small and light you could tuck it into a pet carrier bag and show it off in a shopping mall (or wherever people show off their puppies and kittens).

Even cuter is this weird fact about lions: lion cubs are born with blue eyes! How adorable, until the cub turns two years old and mauls you to death.

These animals are definitely not pets. The blue eyes change to brown or amber when the cubs are two to three months old.

1.5 kg is less than 1% of a lion’s adult weight. So while lions are born tiny and cute they quickly develop into 150-250 kg carnivores.

Hunting requires a lot of energy and it is not always necessary. Instead of daily meals, these predators literally stuff themselves to bursting point at a single sitting.

On average an African lion needs to consume 5-7 kg of meat for each day they are alive and healthy.

But if the pride takes down a buffalo then a single lion may eat 35 kg of meat in one sitting. If there is enough food available these cats can eat an incredible 15% of their body weight in one meal!

How often a pride hunts is dictated by the prey.

Hunting Cape buffalo is hard but rewarding work, so a pride that does this in the Okavango Delta will only need to eat every five to six days. Those living predominantly off zebra will need to hunt more often.

Still, these cats will always be looking for opportunities. If an easy meal crosses their path they will eat it, even if they are not hunting. Just like we will consume a cupboard full of snacks, even when we are not hungry! 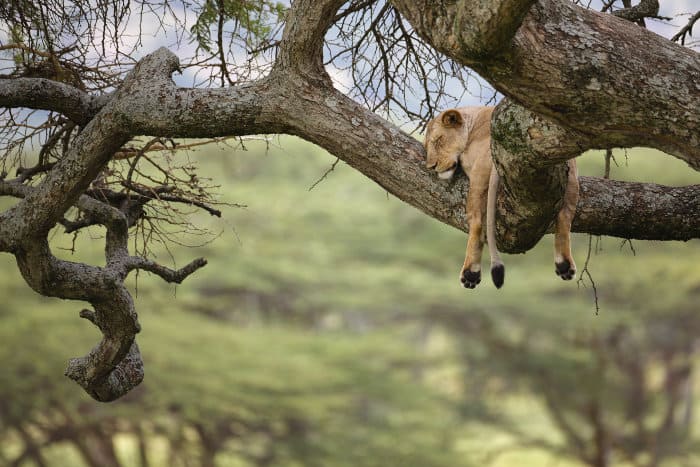 The king of the savannah is often the easiest of all the big cats to spot on safari. They don’t hide away and spend most of the day in the same place.

Lions love to sleep, especially after they have just finished a large meal. Note that they don’t actually sleep for 20 hours a day. Often they are snoozing with one eye open.

On a game drive, it’s relatively common for a pride of lions to fall asleep in the shade created by your vehicle.

You will drive close to the big cats and they suddenly see some shade – such encounters are an incredible connection with your wild side.

10. Lions are visibly different all around Africa 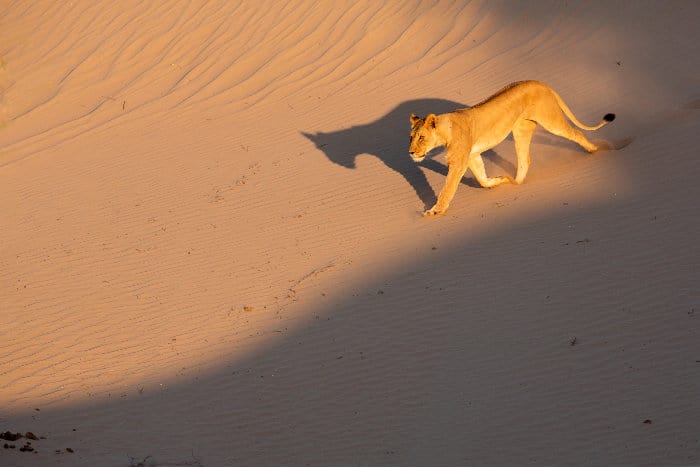 What’s most incredible about these carnivores is how adaptable they are. They have evolved to survive in a remarkably varied range of habitats. In fact the only place they don’t live is the jungle!

For example, desert-adapted lions have leaner bodies and longer legs, which gives them the stamina that is required to cross long distances in search for food. These lions can even go two weeks without nourishment.

Experience These 10 Facts About Lions While on Safari

If you’ve been wondering to yourself “what are 10 interesting facts about lions”, you will hopefully be able to sit back and relax in your new found knowledge. Lions are fascinating creatures that continue to spark the imagination of all animal lovers.

The best place to encounter desert-adapted lions would be in Botswana or Namibia, where they have developed magnificent black manes.

Though you can also see lions on a safari in South Africa, Tanzania, Kenya, Zimbabwe, and other countries in Africa.

Make sure you go on safari soon though. It may not be too long before these animals are lost from the wild.