Apex predators sit at the top of the food chain and are famous for being successful hunters. These animals have no natural predators of their own.

While they are among the most fearsome, they are also some of the most beautiful animals. Seeing one of them in action is an incredible sight.

Africa is home to some of the most striking and powerful predators in the world. But what animal is at the top of the food chain? This article highlights the continent’s top predators.

What is an Apex Predator? 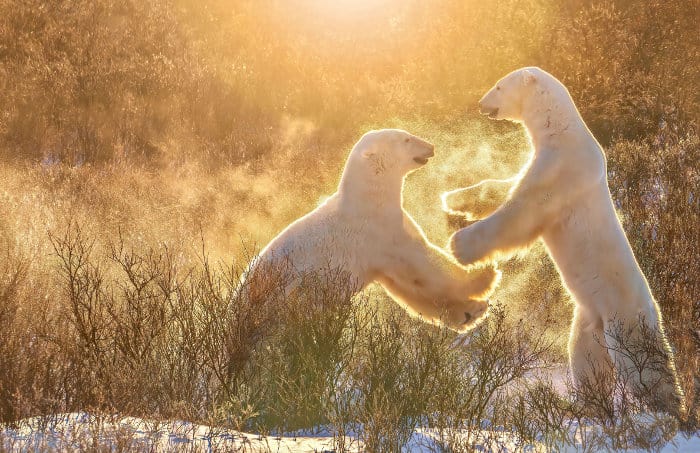 A predator is simply an animal that hunts and eats other animals. However, many of these animals are prey as well.

“Apex” is a Latin term that means peak or top. Apex predators, also known as alpha predators, are the animals at the top of the food chain and do not have any natural predators in their environment.

Apex predators are usually defined in terms of trophic dynamics, meaning they occupy the highest trophic levels. The trophic level of an animal refers to how far it is from the beginning of the food chain.

Role of Apex Predator Animals in Their Environment 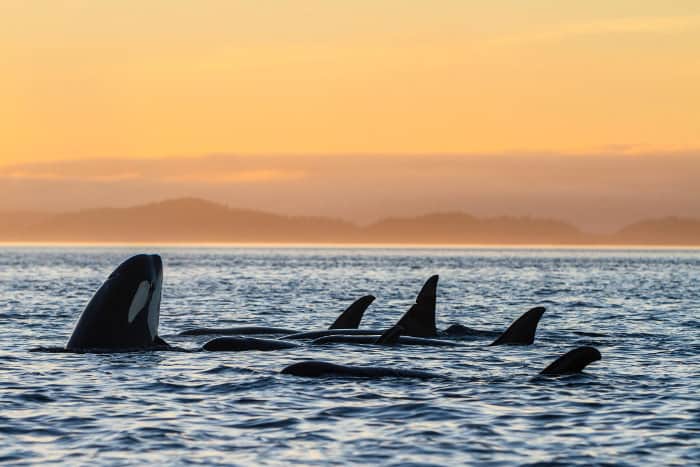 Left to their own devices, a group of herbivores will stay in one place and eat everything down to the ground before moving on.

A healthy apex predator population helps keep these groups of herbivores moving around as they look for cover and try to not get eaten.

And by keeping smaller carnivores in check, apex predators assist in keeping the population of smaller prey at a sustainable level.

All of this has knock-on effects that, in turn, assists in the regulation of disease and maintaining biodiversity within the area. As such, healthy apex predators generally mean a healthier ecosystem overall.

Africa is home to several top predators. These large carnivores have adaptive diets and can thrive in most ecosystems throughout the African continent.

To many embarking on an African safari, these large carnivores are the ultimate sight. For those who are wondering who is at the top of the food chain in the African wild, check out the list to follow. 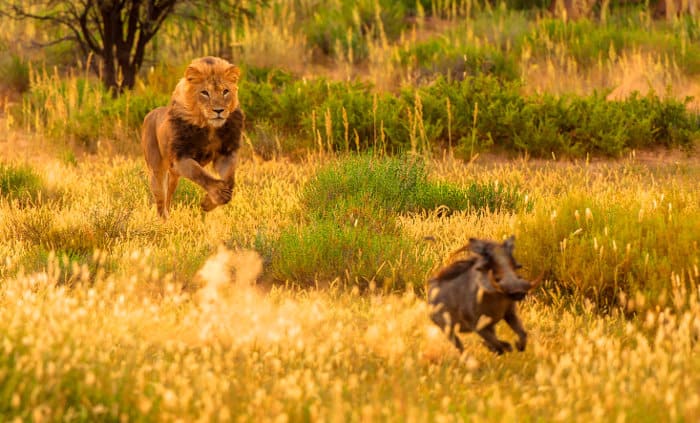 Let’s begin with perhaps the most notorious apex predator in Africa – the lion.

Often referred to as the “King of the jungle”, the lion occurs in savannahs, grasslands, and woodlands throughout most of Africa.

They also occur in Northern India and parts of Eurasia.

Lions are the second largest member of the Felidae family. There is only one species of lion known scientifically as Panthera leo. This comprises two subspecies: the African lion, P. l. leo, and the Asiatic lion, P. l. persica.

Adult lions generally measure between 1.4 m and 2.5 m in length and weigh between 120 kg and 250 kg. With their large size and brute power, these big cats remain the archetypal apex predator.

Lions generally hunt in groups of between two and eight. A major characteristic of these predators is their cooperative hunting. This technique allows them to kill larger prey, such as giraffes, buffalo, and hippos. 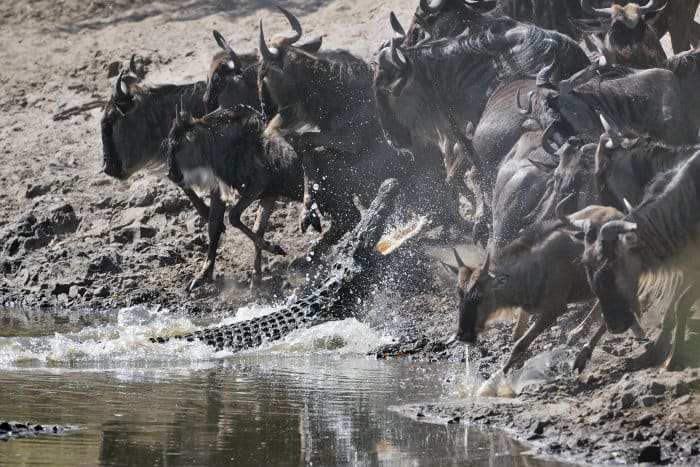 Nile crocodiles are large reptiles that reside in Sub-Saharan Africa.

They are closely related to alligators. However, they are far more aggressive.

Most animals avoid the crocodile’s territory to avoid getting caught by surprise, before ending up in its powerful jaws.

These large lizard-like predators are able to snap their jaws in no time, and their immense power can kill an animal in a matter of minutes. Another factor that makes this predator dangerous is its ability to live both in water and on land.

Crocodiles are large and heavy, measuring between 5 m and 7 m in length and weighing as much as a ton. Despite their physical structure, these animals are extremely quick and agile, especially in water.

Crocodiles have a unique hunting style. They wait for their prey to come closer before attacking them. Nile crocodiles generally eat larger mammals like buffalo and antelope.

They also scavenge on dead animals and steal from other carnivores. More impressively, this apex predator’s lifespan ranges between 50 and 100 years. 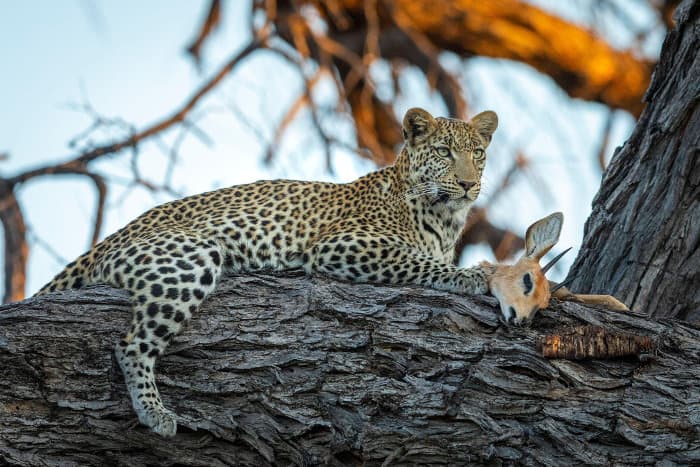 Leopards are one of the five big cats in the Panthera genus. The leopard is the most widespread felid and occurs throughout much of Africa, as well as parts of Asia.

Leopards vary in size and appearance depending on their location and habitat. African leopards are identifiable by their pale yellow to dark golden colored coats and dark spots grouped in rosettes.

They are also large, measuring between 1.8 m and 3 m in length. On average, male leopards in the Kruger National Park weigh approximately 58 kg and females around 38 kg.

These large cats are not as picky as other big cats, giving them an incredibly flexible diet.

While they have generalist palates, leopards tend to develop a preference for certain animals. Most often, leopards hunt smaller animals that cross their path, like antelope, baboons, monkeys, and warthogs.

Leopards are famous for their hunting prowess and have a kill success rate of 38%.

They are stealthy and like to stalk their prey, getting within close range before pouncing.

Leopards kill through suffocation by grabbing their prey’s throats and biting down with their powerful jaws.

Leopards are immensely strong and, at the same time, exceptionally quick. Their long muscular tails aid in balance when running at fast speeds.

They are also agile climbers and can drag their prey up into a tree with ease. All these factors make the leopard one of Africa’s top predators. 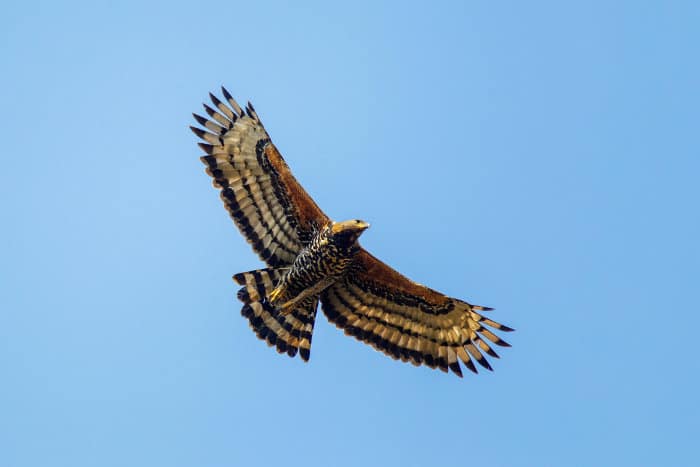 The crowned eagle occurs in sub-Saharan and central Africa and is one of the continent’s top predators, as well as one of the largest birds of prey. They are also the most powerful, especially when considering the weight of their prey.

A large portion of this predator’s diet comprises small ungulates and primates. Occasionally, they may prey on other birds and lizards.

Crowned eagles live in pairs and generally occupy a single territory throughout the year. Their main hunting technique involves long periods of inactivity, perched on a branch.

Here they listen and watch for prey. These large raptors often still-hunt, dropping onto their prey from the tree.

These African eagles are incredibly fast and can reach speeds of 160 kph.

They also have an impressive wingspan, measuring between 1.5 m and 1.9 m. Their wings have a unique shape allowing them to remain remarkably stealthy and quiet when flying. 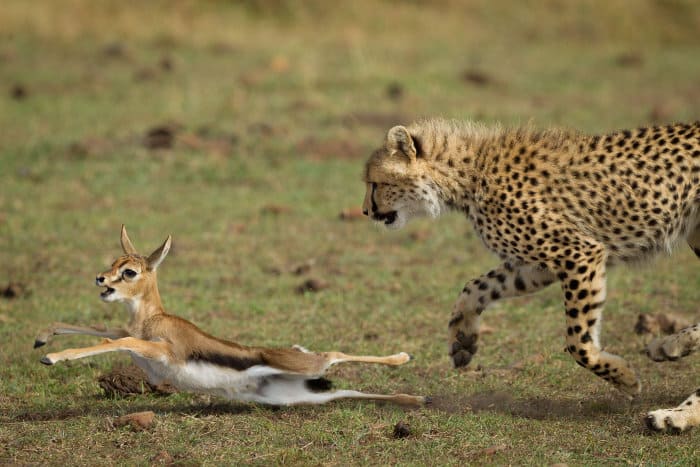 Renowned for being the world’s fastest land animal, the cheetah is undoubtedly one of Africa’s top predators. Reaching speeds of up to 75 mph, there are very few animals capable of evading this big cat.

The cheetah lives in various areas across sub-Saharan Africa, as well as the Middle East, India, Pakistan, and Bangladesh. They generally inhabit areas with plentiful prey and little competition from other more powerful predators.

Cheetahs prefer to hunt in the day and in open spaces. They tend to stalk their prey, getting as close as possible before launching an attack.

Movement by the intended prey usually initiates the chase. While they may stalk their quarry for up to an hour, the attack usually lasts less than a minute. A cheetah’s diet comprises mostly gazelles, impalas, and small-to-medium-sized ungulates.

Cheetahs have an impressive kill success rate of around 58%. While most of their chases end in a kill, they are sometimes ousted by larger predators such as lions.

For this reason, they tend to move their hard-earned meals to a more secluded spot where they can rest and dine.

A commonly asked question is “Are humans predators?”. This is because humans are usually the only threat to apex predators.

Humans are not considered apex predators because their diets are typically diverse. However, a recent study by Dr. Miki Ben-Dor and colleagues found that humans were, in fact, apex predators for around two million years.

The extinction of larger animals (megafauna) and the decline of animal food sources toward the end of the stone age led humans to diversify their diets.

A Footnote on Africa’s Top Predators 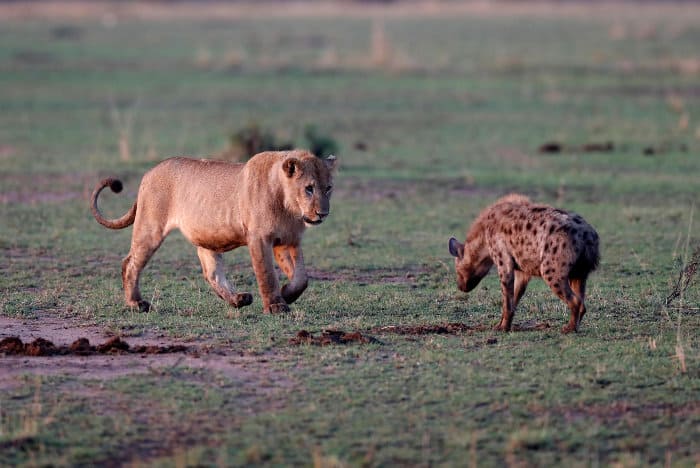 Africa is home to some of the most impressive predator species in the world. These animals sit at the top of the food chain, with no natural predators of their own.

Many of Africa’s top predators are endangered or have become threatened over recent years.

As apex predators play a significant role in keeping the ecosystem healthy, the conservation of these species is a must.

Several of Africa’s top predators occur in game reserves throughout the continent. To view these majestic animals up close, take a look at these African safari deals and start planning your visit.