The flowers of the African iris opens into a beautiful configuration that inspired one of its other names – the butterfly iris.

Coupled with dense clumps of leaves that make for dramatic ground cover, it’s no wonder that the African iris is a show-stopper on the African savannah. 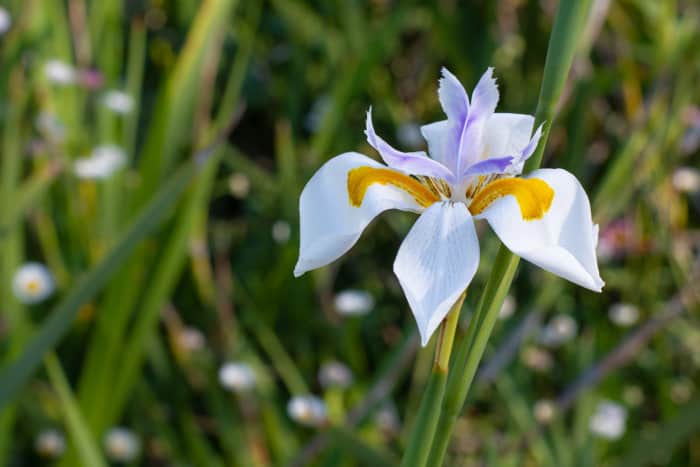 Resembling its iris relatives, the African iris has long, upright, spiky leaves and flower stalks that bear a succession of blooms. A prolific flowerer, the African iris carries its 7-cm flowers on a wiry, arching stem.

Its white or yellow blossoms consist of 5-6 slightly curled drooping petals. These are layered beneath a second set of petals of a contrasting colour that emerges in a vertical position from the centre.

The robust plant has dense clumps of stiff sword-like leaves that radiate up and out in a fan-shaped pattern. The narrow leaves are a glossy dark green mostly 25-30 mm wide, almost the same as the stems. The foliage typically remains evergreen throughout winter unless burnt by chilly temperatures.

The African iris is a perennial plant with a moderate growth rate, reaching almost 1 meter tall and over 1 meter across. It is a tough drought-resistant plant that thrives best under the full intensity of the African sun.

The plant grows and spreads by rhizomes, with plantlets developing on the flower stalks and rooting easily once they touch the ground. Its fruit is an oval-shaped capsule that disintegrates to release black seeds.

The African iris comes in two colours: white and yellow, with the main difference between the two species being their flowers. 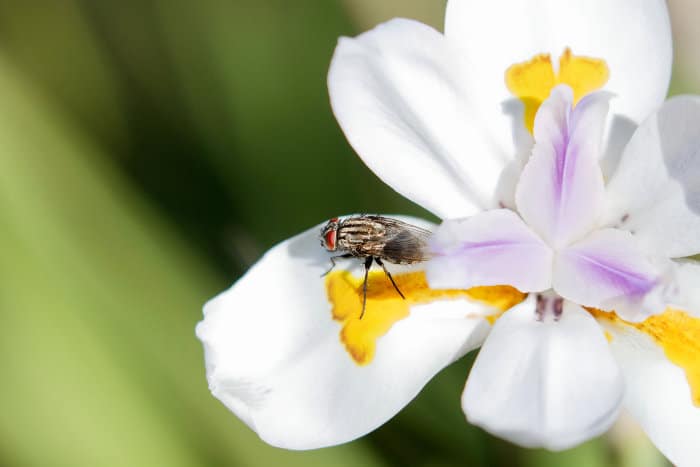 The flowers of the white African iris are more rounded with three distinct petal layers. Its outer white petals are marked with gold close to the base, while the inner white petals have a brown marking at the base. Its innermost petals are narrower and violet in colour.

The white African iris has fewer, larger and tidier leaves and the flowers burst from the stalks amid stiff, evergreen foliage. 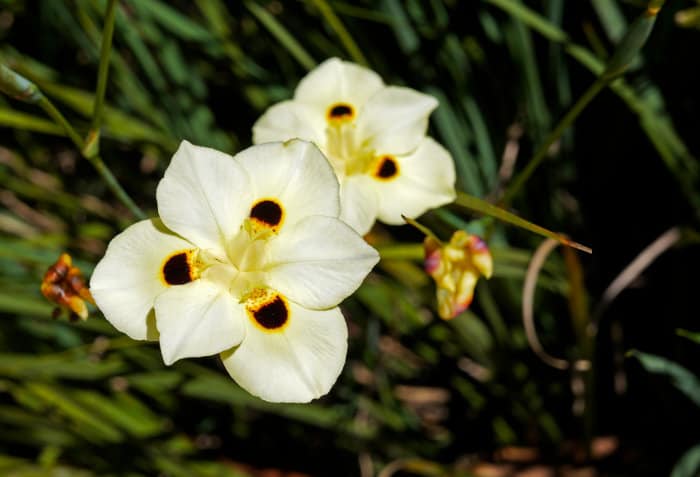 The yellow African iris is characterized by large, grassy clumps of dark green leaves with many 7-8 cm flowers. The flowers are tinted yellow with three dark brown spots, each of which is bordered by an orange outline.

When Do African Irises Bloom?

The flowers of the African iris are showy, unique and striking. They are produced sporadically throughout the year, especially during spring and early summer. Although the flowers are short-lived – lasting just a day, they are quickly replaced. This is because the plant blooms in profusion over an extended period.

The blooms usually come in bursts, with a fortnight of rest between flowering events. Every stalk produces a big supply of buds, giving rise to numerous blooms. The flowers are typically closed to the world by midday, except on overcast days.

Where to See the African Iris 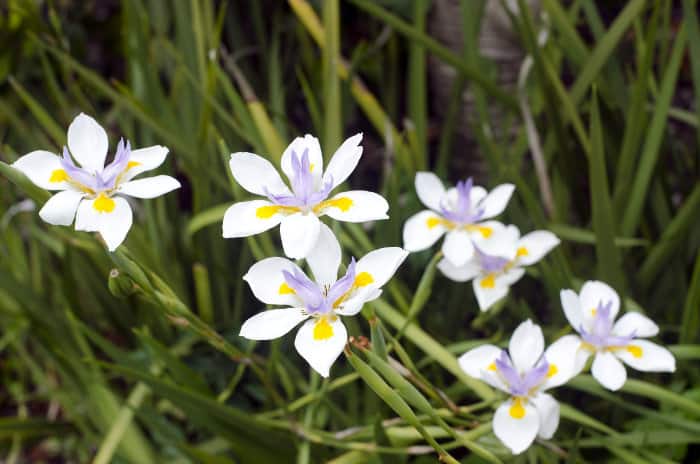 The African iris originates from tropical Africa, with most species being widespread from eastern to southern Africa. In eastern Africa you can see them in Ethiopia and Kenya, as well as in Congo and Angola to the west. They can also be admired further south in Zambia and South Africa.

Irises have had a long history of use in medicinal remedies. From ancient times, the fleshy, creeping rhizome of the iris has enjoyed a considerable reputation for medicinal virtues.

Juice from the fresh roots is employed as a cosmetic for the removal of freckles from the skin. Infusions made from the inner part of the rhizomes are taken orally in enemas to treat dysentery. The rhizomes are also used for hypertension and in childbirth.

In the dry state, the root is used for lung problems, coughs and hoarseness. It was also formerly used in the treatment of bronchitis and chronic diarrhoea. The dried powder is used to excite sneezing and relieve congested headaches, while the dried root is chewed to overcome disagreeable breath.

The rhizomes of the iris are used as ingredients in tonics for goats. The plant is also a great attractor of butterflies and bees, which makes it great for bee-keeping.

From the earliest times, the iris was used to make perfume, its intense and delicate odour being favoured for use in the finest scents. 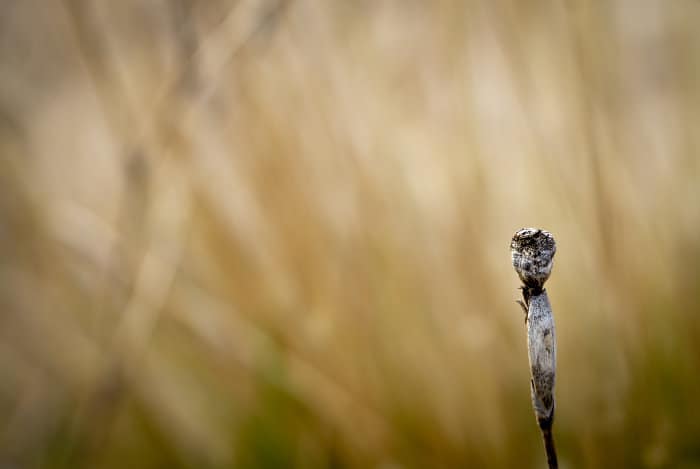 Since ancient times, the African iris has had rich meanings attached to it, inspired by its striking beauty and uniqueness.

Drawings of the African iris have been found in several ancient Egyptian palaces. The ancients placed an iris flower on the brow of the Sphinx and on the sceptre of the pharaoh. They identified the three leaves of its blossoms as symbols of faith, courage and wisdom.

The iris flower actually derives its name from Greek mythology, being named after Iris, the goddess of the rainbow. In ancient Greece, irises were planted over the graves of women to summon the goddess Iris to guide the dead on their journey to the afterlife.

In ancient Rome, the iris was dedicated to Juno, a Roman deity, and symbolized power and majesty. During the Middle Ages, the iris became linked to the monarchy in France, with the fleur-de-lis eventually becoming the recognized symbol of the country.

Through its intricate history, irises were given as gifts to convey deep sentiments such as fondness and admiration. Over time, the different colours of the iris have come to symbolize different meanings: the white iris symbolising purity and the yellow iris serving as a symbol of passion and eloquence.

The African Iris in African Folklore

Some African cultures believe that if you’ve attended a funeral or entered a house with a corpse, you must chew the rhizomes of the African iris and then spit them onto the ground to chase away bad luck. If you don’t, an immediate member of your family may die.

In some parts of Africa, the African iris is known as the rain iris as it is believed that the flowering of this plant presages the coming of the rains.

So why not time your visit to Africa just before the next rainy season? You just might witness the rainmaking powers of the gorgeous African iris! 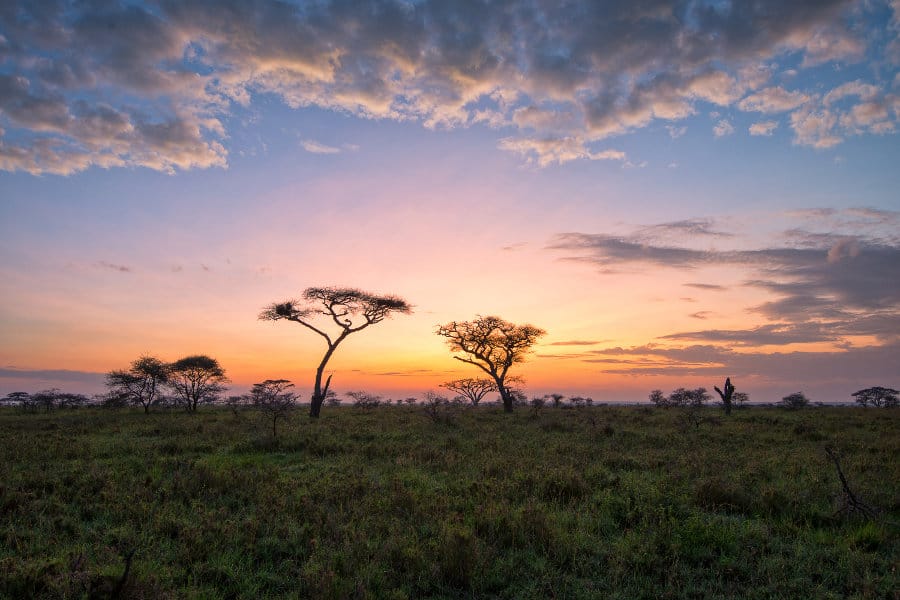 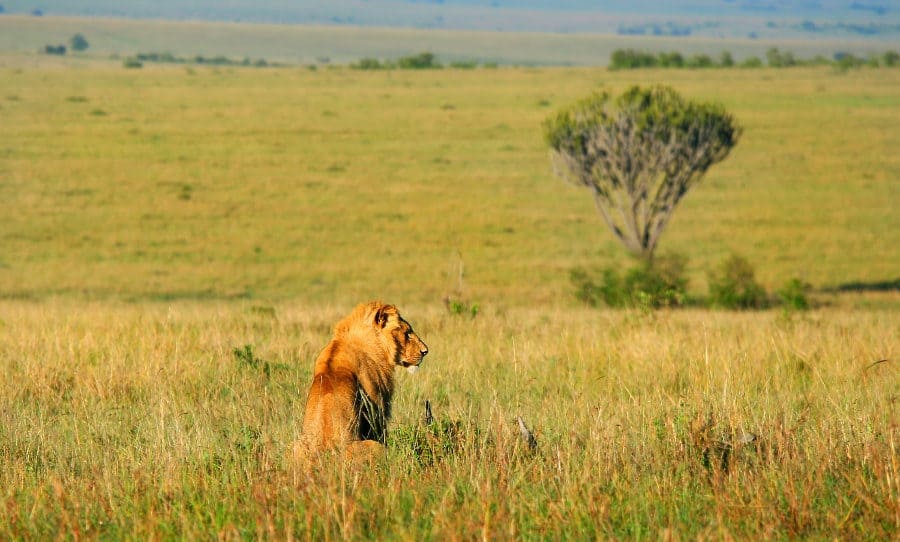 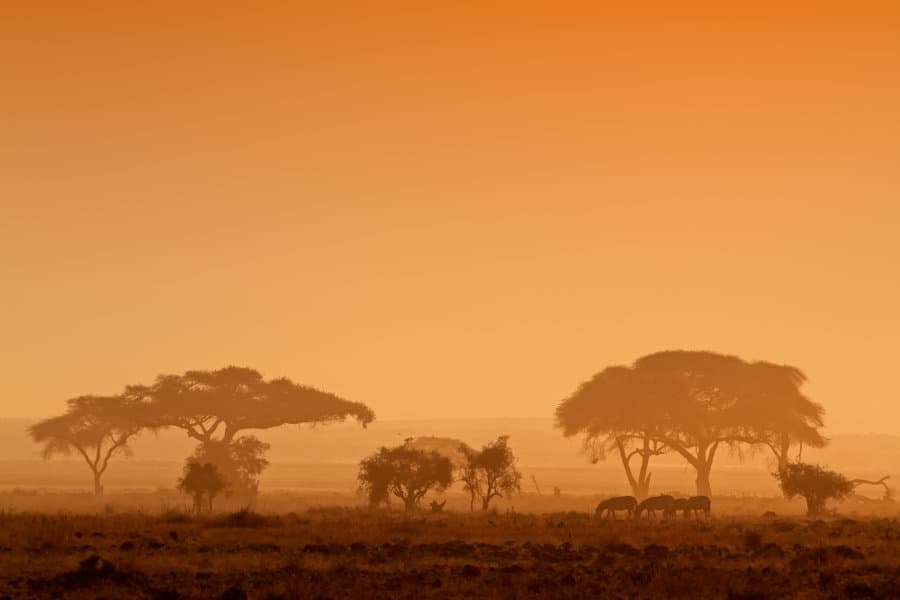