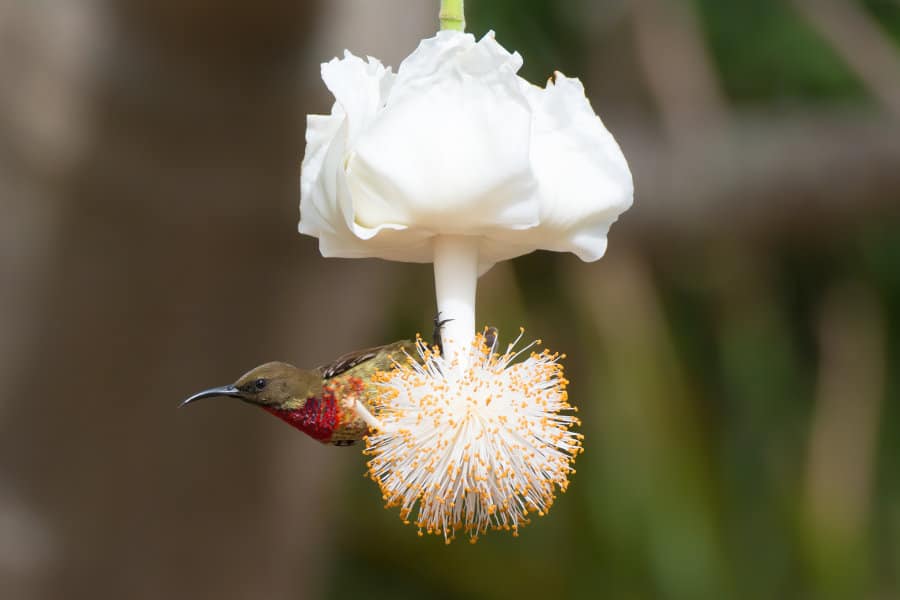 The baobab flower blooms on the African Tree of Life. Elegant and enchanting, they hold special significance on the African savanna. To see them in bloom is one of the continent’s most special experiences.

The baobab tree holds precious water in its trunk so it can survive through drought. They are as iconic as African elephants. Yet to see a baobab flower in bloom can be rarer than encountering a black rhino – the flowers open at sunset and may be gone by morning.

Each tree has hundreds of flowers that are ready to open, yet not all of the flowers open at the same time. This creates a magnificent display of changing nighttime colours as the tree blooms beneath the full moon (yes – baobab flowers are so incredible they time their bloom for the full moon!).

Baobabs are the largest living organisms to create flowers. Here you will discover all you need to know about baobab flowers.

When do baobab flowers bloom? 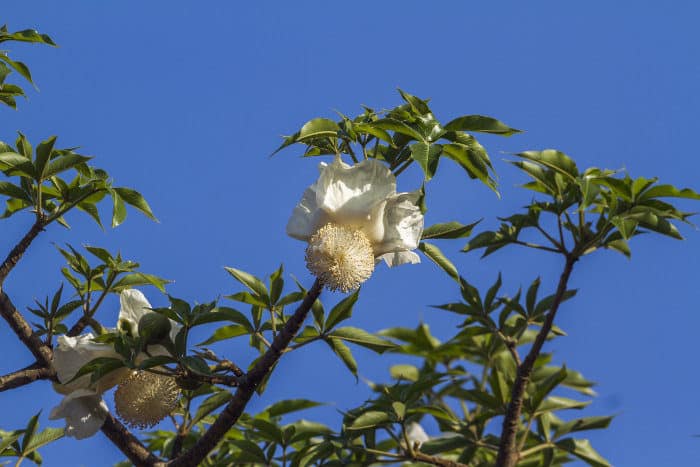 The short answer is that they start to bloom in the late afternoon, just before sunset. Blooming throughout the night the flower will start wilting within 24 hours of opening.

A more elaborate answer is that the baobab tree will be at least eight years old before it flowers. Some species only start to flower when the tree is 20 years old.

The baobab tree will grow leaves at the start of the rainy season, just before the first rains. Flower buds will start to grow at the same time.

There are nine species of baobab flowers and the timing of their flowering is different for each species. Incredibly, the flower usually opens at full moon, timing its arrival with the lunar cycle.

Most baobab trees flower after every rainy season. Some baobab flowers appear twice a year but one species only flowers every other year.

The rainy season for the Southern African baobab tree is between October and January. The flowering baobab will flower continuously during the rainy season (early summer October to December) and will bear fruits that have many wonderful uses and meanings. 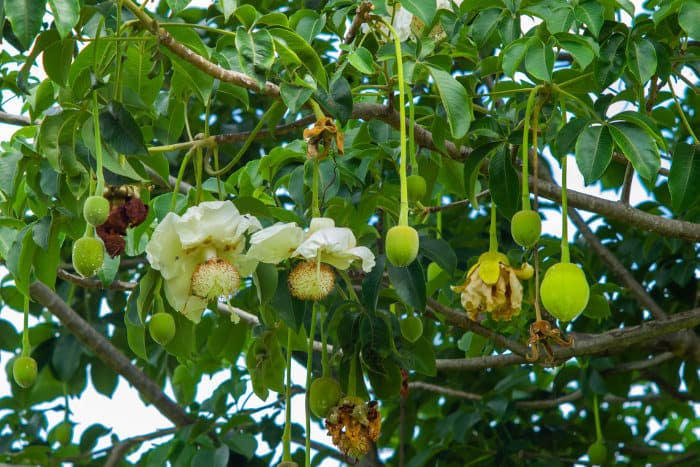 The flower buds are oval in nature with a suede-like textured olive skin. They look like pendulums hanging on the tree.

Once the bud starts opening, the textured shell of the bud will curl up and you will see baobab flower petals appear. The petals are creamy and white with a pompom-like pistil at the center.

The flower is big, approximately 10 cm long and 4 cm wide, and heavy with a waxy texture on its petals.

The morning after the flower blooms it will still look intact and pretty, ready to be harvested by bats and birds. But as the temperatures rise when the sun comes up, the petals will slowly wilt, turn brown and fall from the (hopefully pollinated) pistil onto the ground.

All this occurs within a 24 hour timeline – so you must be really lucky to see a baobab tree in full bloom.

Where can baobab flowers be seen? 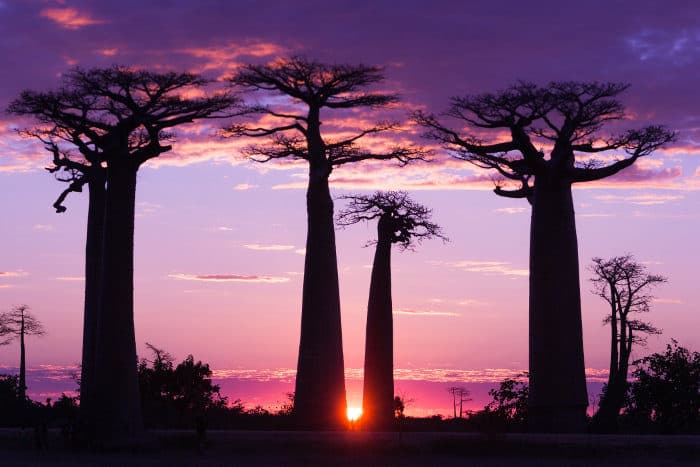 The good news is that baobab flowers can be seen blooming on many arid African savannas.

The nine species are scattered throughout the world.

The pollination of the baobab flower

Like any other flower its purpose is to be pollinated. What is wonderful to note is that not all the flowers open and bloom at the same time. This allows the tree to have multiple flowers being pollinated over a longer period of time.

The baobab’s bisexual flower stays open at night to attract nocturnal animals like insects (hawk moths and rose beetles in particular), bushbabies and bats. Animals are attracted by the bisexual flower’s nectar and will move from flower to flower to pollinate them.

The flowers will probably be pollinated within the first 12-18 hours of them opening. Which is good news for the baobab, because the flowers are usually dead within 24 hours of opening.

Impala and goats enjoy baobab flowers as food. There are some reports of monkeys eating the flowers as well.

The pollinated flowers produce fruits that are considered one of Africa’s superfoods, packed full of vitamins and minerals. Fortunately they are not harvested, so these flowers remain wild as they should be. 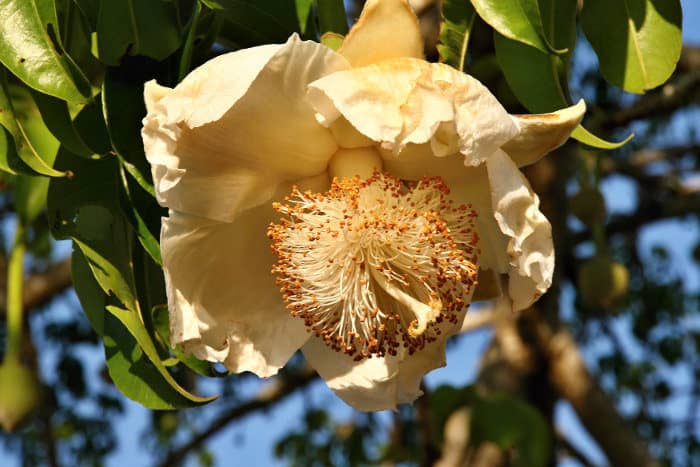 1. The scent of the baobab flower is one of the least desirable things for the human nose. Baobab flowers change aroma throughout their bloom and often smell like decaying flesh.

2. Myth buster: there is some confusion around baobab trees and that they only flower every 40-50 years. This is not true! This confusion has set in due to people confusing the corpse plant with the baobab tree.

3. The corpse plant has the largest ever flower and it only comes out every 40-50 years. Baobabs are the largest flowering organisms.

4. Although the baobab tree is labeled the African Tree of Life, its numbers have been in decline since the turn of the 21st century. The trees are crumpling at a rapid rate. Scientists believe that this is due to rising temperatures and intensified drought-like conditions in Africa.

5. Each baobab tree has its own flowering rhythm. Some of the tree’s flowers open within 30 seconds and others take a few minutes to an hour to open.

The Importance of the Baobab Flower 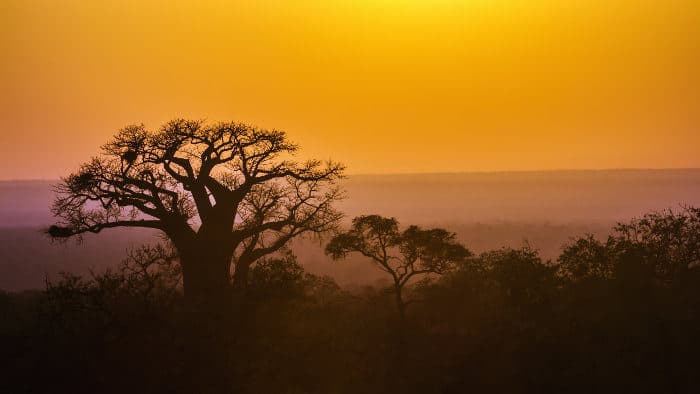 The story goes like this. God was busy tending to the garden on Earth and planting trees. The work got too much and God required help from the animals. Hyena was given the baobab to plant, but he felt the baobab flowers smelt disgusting. So he just planted it without any care and the baobab ended upside down. 🙂

The baobab is often seen without leaves and with a large tall trunk, yet it provides needed shade and shelter to many animals. It is no wonder that the Bushmen believe that the flowers are to be left alone as there are spirits within them (probably relating to the smell of decaying flesh).

Bushmen tribes believe that if you pick a baobab flower you will be devoured by a pride of lions!

It is important to preserve and celebrate the baobab flower. Without this rare flower there will be no more baobab trees.

So when you are traveling an African savanna after the rainy season, and it’s coming up to full moon, find yourself a baobab tree and admire the flowers blooming free. 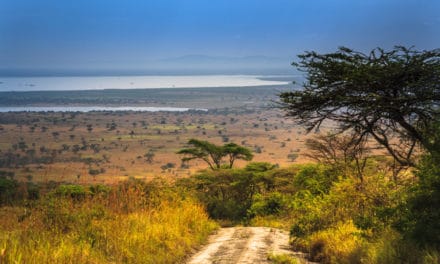 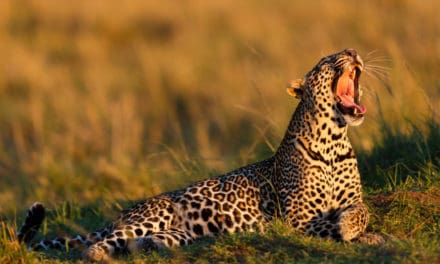 The rhino horn rush: stigma behind a tradition 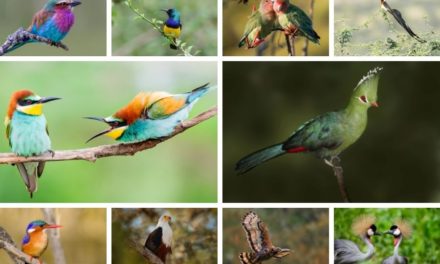 Top 10 most beautiful birds in Africa