Impala animals are one of Africa’s most recognisable symbols. But hear the word ‘impala’ and what immediately comes to mind?

For those of you from the USA the image of a Chevrolet Impala may instantly spring up.

Sleek and stylish in appearance, this automobile is a complementary symbol of the original ‘impala’ – the impala animal. Like the antelope, the Chevrolet is also incredibly common.

Except the original impala has been striding and stomping across the African savanna for far longer than cars have been around.

So, apart from the name, let’s see what we really know about the intriguing impala antelope.

What is an Impala? 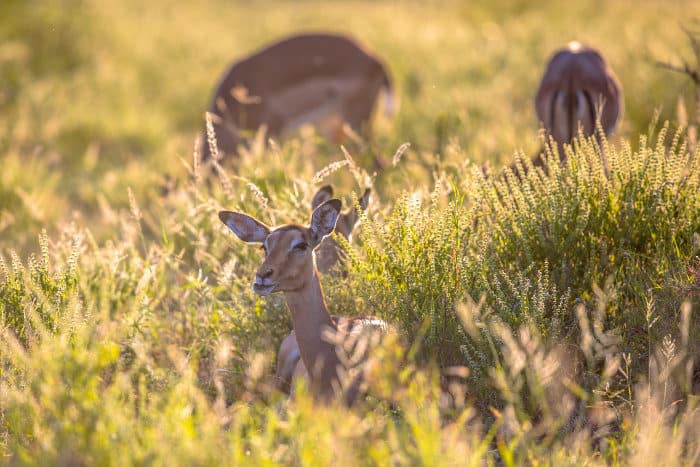 Perhaps one of the best well-known members of the antelope circle, impalas are natives of the East and Southern African savannas.

The impala finds itself midway up the ranks within the antelope brethren, regarding size, weight and stature.

The animal’s smooth and silky fur is somewhat prized. Males have chicane-shaped, sloping horns that give an aura of splendour, and a majestic appearance of pomp and pretense.

A marvelous sight to savour and behold, only the luckiest will get very close to these miraculous creatures in their natural habitats.

With the slightest whiff of unwanted company, the impala will bounce to safety. So while they are a very common safari sight, most people only see impalas from a distance.

Males are aptly known as rams, perhaps because of their tendency to tussle and tangle horns with other males. This takes place at the start of the dry season when testosterone levels are high. 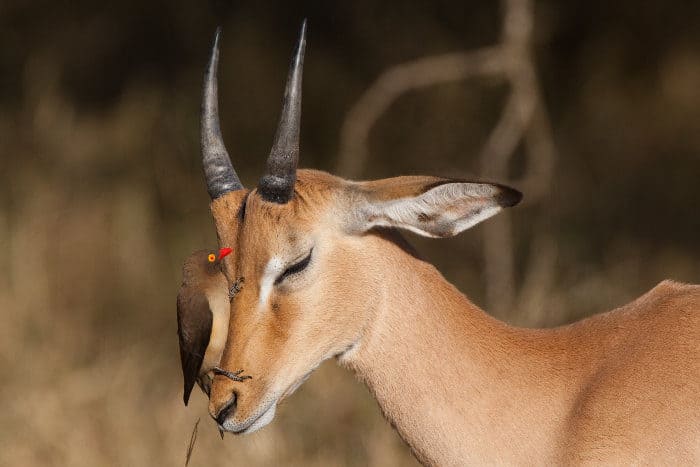 Female impala are referred to as ewes and, as is the case with a multitude of Earth-dwelling species, they are dwarfed in size and status by their male counterparts. 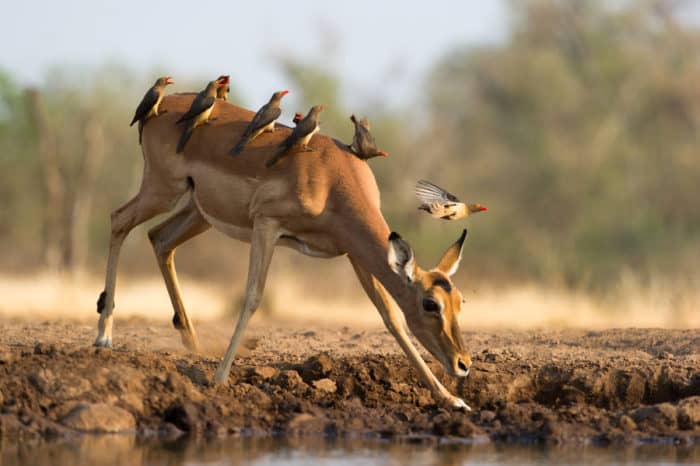 Is the Impala a Deer? 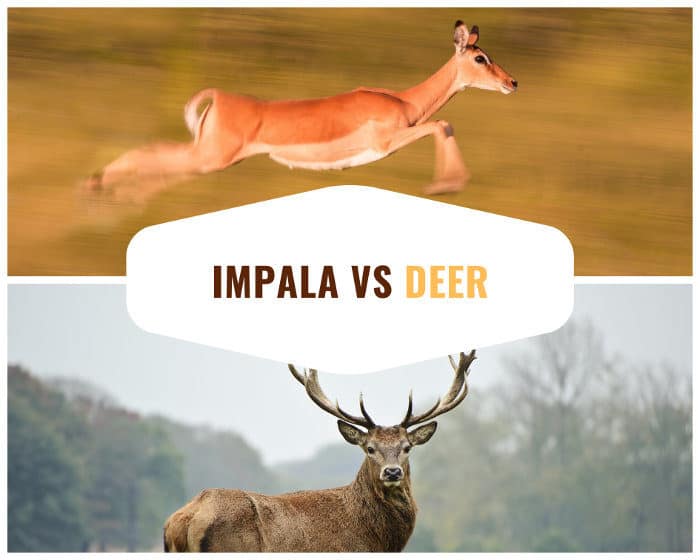 Often the sufferer of mistaken identity, the impala is confused with a whole host of different deer and antelope. Though the differences may seem subtle to some, they are plentiful.

First, the impala actually has horns, whereas some members of the deer clan carry antlers. For laymen it may seem like a minor distinction but it is an undoubtable claim.

Genetically, as members of the bovidae family, impala are more closely related to cattle, goats and sheep, sharing an array of physical traits such as hoof shape.

Under the umbrella of antelope lives a massive selection of animals, sharing similar features, as well as slight variations – wildebeest, oryx and gazelle, to name a few.

So no, impala are not deers. They are impalas.

What’s the Difference Between a Gazelle and an Impala? 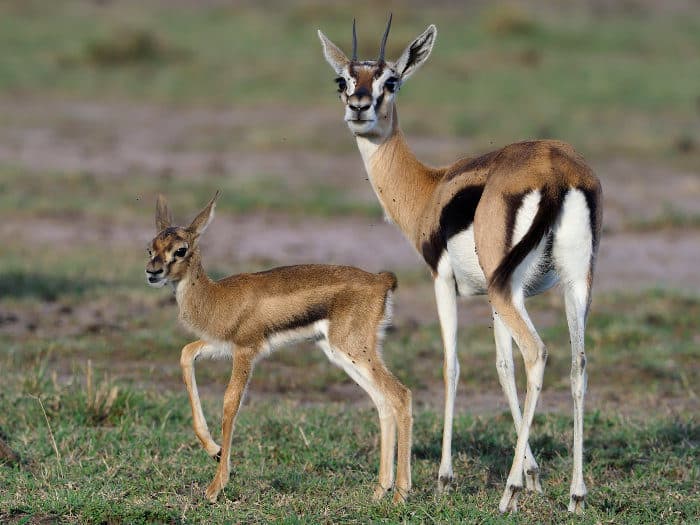 The word ‘impala’ actually comes from the Zulu language meaning ‘gazelle’. This serves to complicate the issue when trying to persuade others that the two beings are notably different in many ways.

There is a great crossover between the general behaviours, DNA, and culture of the gazelle and the impala.

All adult members of the gazelle family have proudly protruding horns, in contrast to the impala whose females have none.

Gazelle are considerably smaller in both weight and dimensions, with a fully grown male often being slighter in stature to an impala female.

The most impressive ability of the impala is what it can do when sensing danger. The behaviour is known as ‘stotting’. When sensing concern an impala will bounce into the air and explode forwards on landing, maintaining rapid speeds until out of harm’s way.

The whole process resembles a high-performance motorcycle which has been kick-started and pushed full-throttle.

Instead of Chevrolet, maybe Ducati would have been a more suitable company to have used the ‘impala’ name to sell its latest model. With its smooth and sleek body, plus its propensity for sudden speeds, the impala animal has much more in common with these finely-made machines. 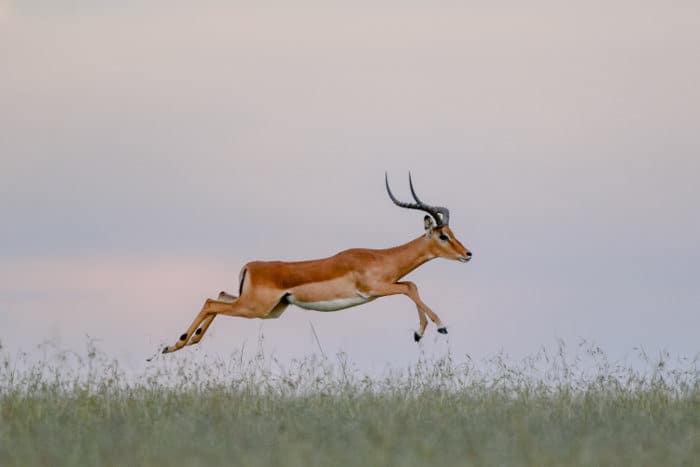 The impala has been clocked at speeds of up to 50mph (80 km/h). Most impressive is a breakneck burst of acceleration which is almost exclusively called upon to evade capture.

Impalas are on the dinner menu of many big cats, especially lions and leopards. So there are often reasons to run.

These 80 km/h speeds are not sufficient for the impala’s survival, so stealth and slyness are other tools it keeps in the locker.

How Does the Impala Escape Predators? 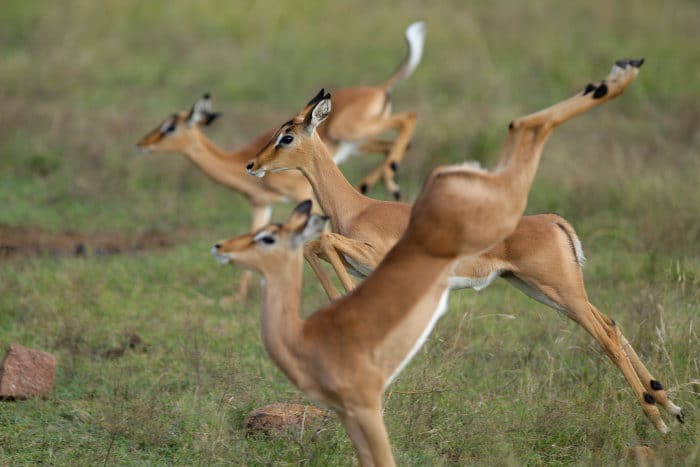 The impala adopts a zig-zag trajectory to help its enthusiastic escape.

Many of its known predators trump the impala in speed, size and overall strength. So the impala focuses on the attributes at its disposal. It uses a solid sense of balance and astounding levels of agility to chop, change, faint, fake and step its way to safety.

The impala is the proud owner of a colossal leap, both forwards and up in the air, making it nature’s most eligible jumping athlete. Whether sprinting, springing, leaping or launching, it can propel itself quite remarkable distances, all in the name of self-preservation.

Boasting a jumping distance of over 10 metres from take-off to landing, and able to leap three metres upwards, the impala can go anywhere. Bushes, rocks and other obstacles pose little problem to these elusive creatures.

Who are the Impala’s Predators? 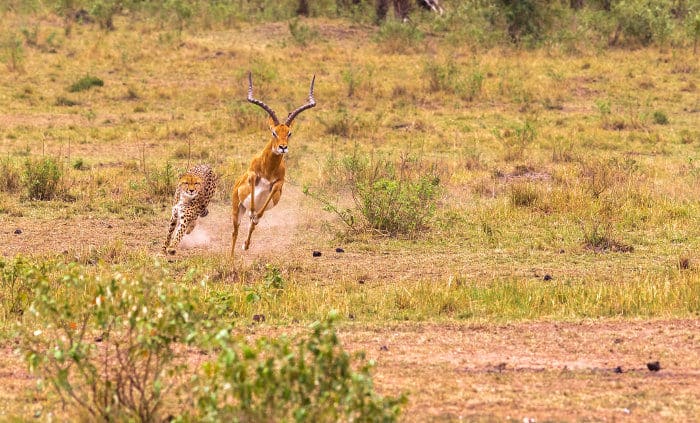 Alarmingly for the impala, there are a wide range of animal species who keep it on their culinary radar.

Most cats of any significant size see the impala as fair game, as well as other more surprising suitors, like crocodiles and hyenas.

The impala is a victim of geography and genetics. It finds itself living among some of the most deadly and dangerous predators on the face of the planet.

What Does the Impala Antelope Eat? 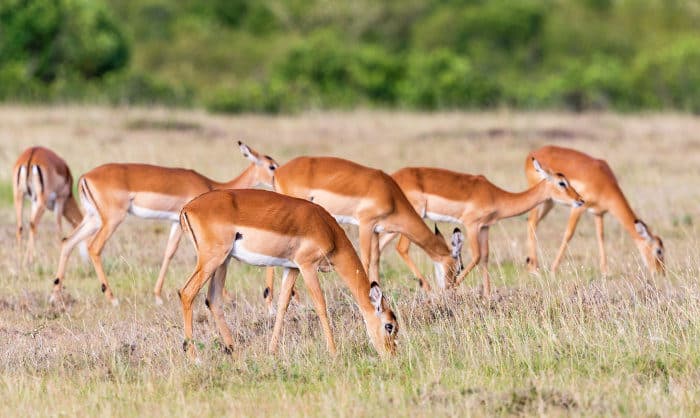 Impalas spend most of their days eating.

They subsist on a simple meat-free diet, preferring some of the smallest vegetation available on the African savanna – grass shoots, herbs and shrubs.

The plentiful nature of grass means finding food is rarely a challenge. It’s finding water that the impala must learn.

Known as mixed feeders, impalas also have an innate versatility to adapt to their surroundings and switch between grazing and browsing. In short, the impala will gnaw through the majority of greenery it finds.

This advanced form of multi-stage digestion means that the impala really does get the maximum benefit from every bountiful bite.

Gestation of the Impala 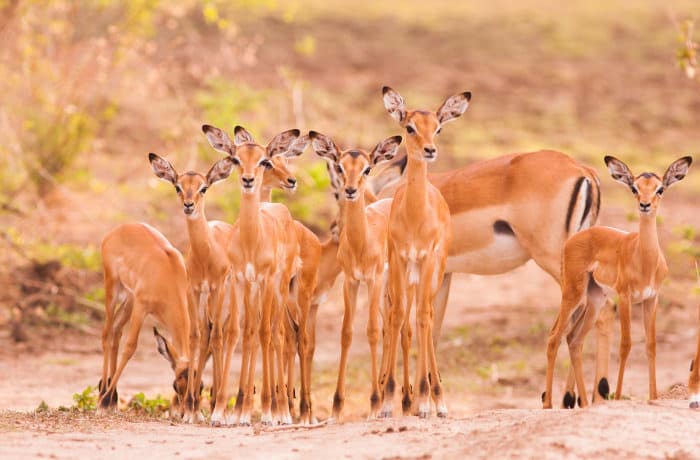 The approximate gestation period for the impala is six to seven months and, as with most humans, the offspring generally arrive one at a time.

Females are the primary caregivers to their newborn calves, responsible for feeding, protecting and monitoring the day-to-day development of their young.

The weaning, grooming and raising of the calves is a condensed and highly sped up process.

Impala are considered to be fully grown and ready to procreate from as young as 12 months old, giving a whole new meaning to the phrase ‘growing up fast’.

‘Safety in numbers’ is not a philosophy that is always found to be true when a pack of hungry hyenas or a pride of starving lions are on the prowl. But it is somewhat true.

Female and child impala co-exist in extremely big herds of up to 100 individuals, while big groups of bachelor males roam around separately. The more impala the more chance of confusing and evading a predator. 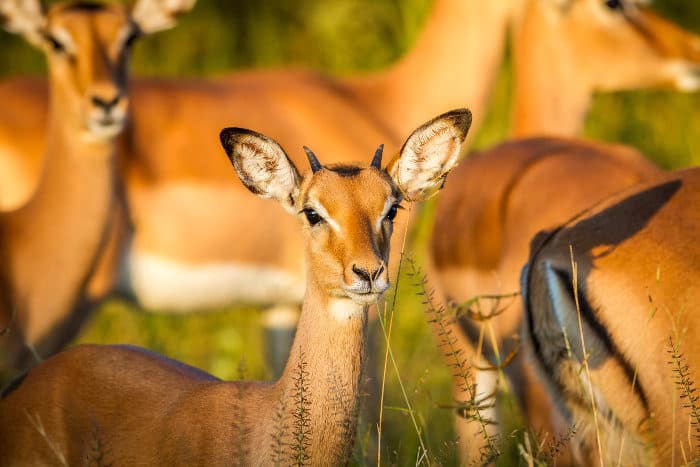 By no means the longest living beings on the planet, a happy and healthy impala can expect to live over ten years in the wild.

They say that 13 is unlucky for some. The impala can include itself in this group of ‘some’, with 13 being the average life expectancy of these astounding antelopes. 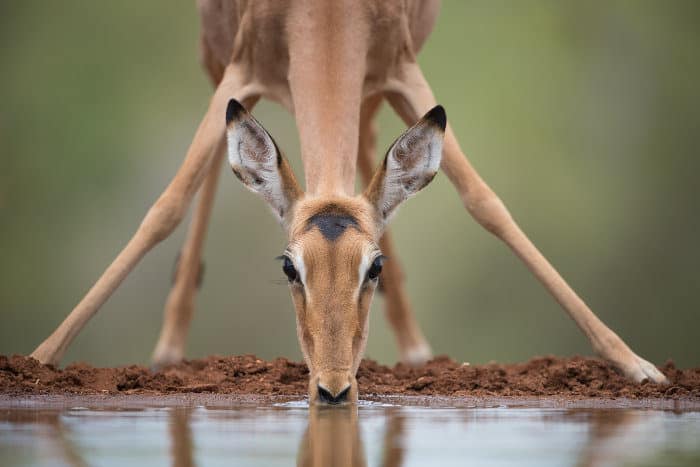 The Future of the Impala Antelope 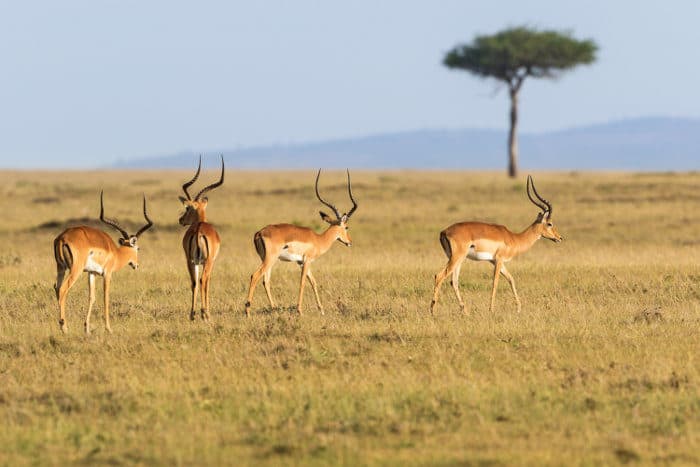 To date, the impala is not an endangered species but this does not mean there isn’t cause for alarm.

Due to ever-expanding farming and roads, the migration patterns and natural habitats of impalas are being severely disrupted. This disruption is hampering their ability to access areas of rich grazing and protection.

As if this wasn’t enough, impala have also gained unwanted popularity as, reportedly, the most hunted members of the antelope ancestry.

A situation of stability could soon turn for these beautiful animals if efforts to conserve and protect their numbers are not maintained.

The best way you can help is by going on an African safari to see these animals in the wild. A safari supports the landscape and this makes sure impalas and other animals have space to thrive.