It looks like Bambi but it’s actually a Cape bushbuck, an animal gentle in nature and easy to miss in the wild. And while Disney invented Bambi in 1942, bushbuck have been around since long before humans walked the earth.

The Cape bushbuck (tragelaphus sylvaticus) is part of a wider antelope species in sub-Saharan Africa and is closely related to the kéwel, kudu and nyala. In this article you will find out all the facts about the bushbuck’s nature and how you can spot them in the wild.

Spoiler alert – Bambi is actually a mule deer but the bushbuck similarities are impossible to ignore.

Where can you see the Cape bushbuck? 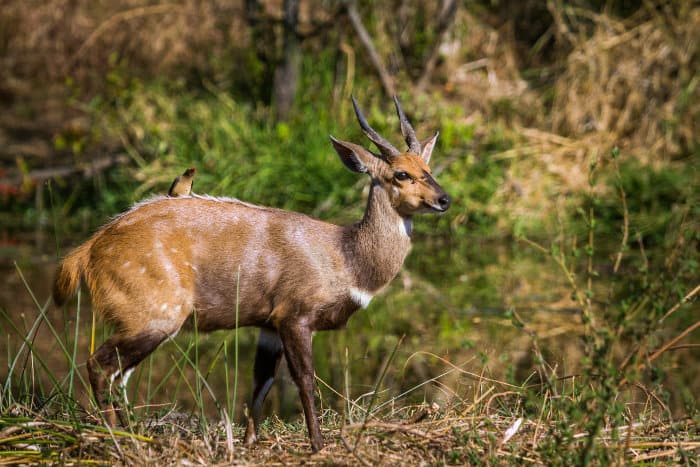 In Southern Africa you can find the Cape bushbuck from Cape Town all the way up to Mozambique, Zimbabwe, Zambia and Angola (they are obviously after the greenery there). They are also found sharing their habitat with a close relative, the kéwel, in the middle and northern part of Africa.

Bushbuck are very adaptable animals. You can find this medium to large antelope hanging out in green rainforests, montane forests, fynbos, woodlands, and even semi to arid savanna terrains. They prefer thick greenery to hide in, away from the lurking eyes of predators.

These smart animals consume most of their water through the food they eat. They can survive in dryer areas by absorbing dew and moisture from leaves. How clever is that?

How can you recognise the Cape bushbuck? 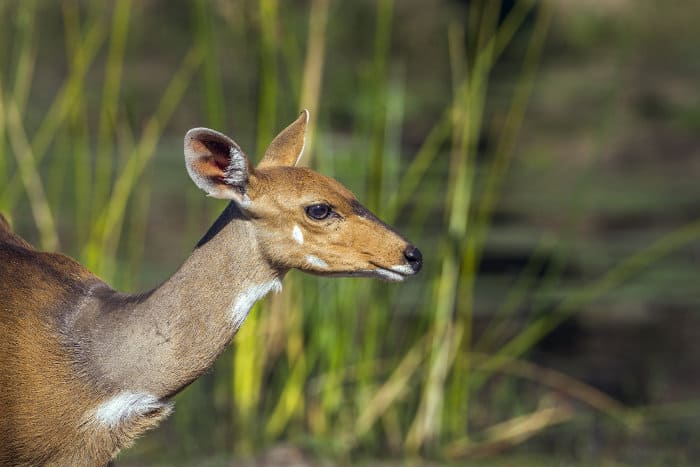 Cape bushbuck are the smallest of the spiral-horned antelope. They have very impressive horns that extend straight except for a single twist.

They are full bodied animals with a general weight of approximately 60 kilograms, however the females and males differ in size.

It’s all about the horns

All male Cape bushbuck have horns. However, they can sometimes be seen on females as well. The horns are very sharp and get longer with age, measuring between 26 cm-57 cm long in mature rams.

The Cape bushbuck can be a very dangerous antelope because of its horns. While Bambi simply pranced around, bushbuck sometimes attack and their stabbing horns can cause fatalities. 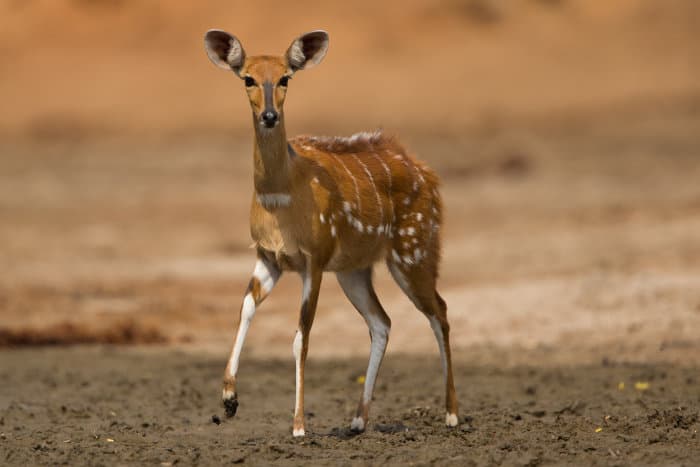 Their bodies are predominantly grey and brown with some white stripes and spots. Yep, just like Bambi! Walt Disney must have been inspired by a visit to Kruger National Park!

If that sounds outrageous then consider this. Originally Bambi was drawn as a roe deer. But those deer aren’t native to America, so Disney made his own animated crossbreed with a mule deer. Who is to say that he wasn’t stealing attributes from antelope elsewhere in the world?

You will find that the females are often lighter in colour and have a red-brown tint, with more distinct white spots and markings. Their coat darkens with age. Usually the longer the horns the darker the skin and older the antelope.

The Cape bushbuck is found in many places and their colour varies according to location.

In general, bushbucks found in the south and eastern parts of Africa are slightly yellower with less markings on their bodies. Bushbuck from the northern and western part of Sub-Saharan Africa are redder and have more distinct stripes and spots.

What about their social behaviour?

Cape bushbuck are usually solitary animals although you might sometimes see them traveling in pairs. This will be a ewe and its young.

Although they have small home terrains they are not territorial. Instead of fighting, males will make a good effort not to bump into another. That’s certainly a gentle Bambi-like characteristic.

Even ewes will prefer to keep interaction with their young to only a few hours a day. Compare that to animated Bambi, who is incredibly attached to his mother.

The Cape bushbuck is prey to many 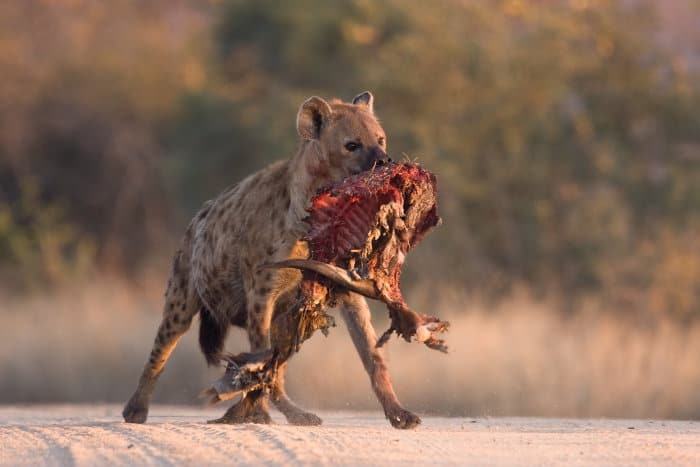 Despite their sharp horns and relatively impressive size – bushbuck are as big as people – these animals are on the dinner menu for most predators.

Their prime threats come from leopards, lions and humans. But since the region in which the bushbuck lives dictates predation, the danger list can also include cheetahs, hyenas, hunting dogs and crocodiles.

What happens when a bushbuck faces its threats?

When the bushbuck observes a threat they will react according to the level of danger.

If it is merely another animal walking by, a good distance away, the bushbuck will lay flat on the ground. They may also just stand dead and allow their coat to merge as camouflage with the background. This is a good tactic if the bushbuck is downwind of its predator so it cannot be smelt out.

If the bushbuck observes danger in the open they will walk to the closest cover. If the threat is too close for comfort they will probably run away while making horse barking sounds.

The bushbuck becomes a little bit more active when a predatory threat is stalking them nearby. They will run away at full speed but can turn around and attack with their horns, especially if they are cornered and have no other option. 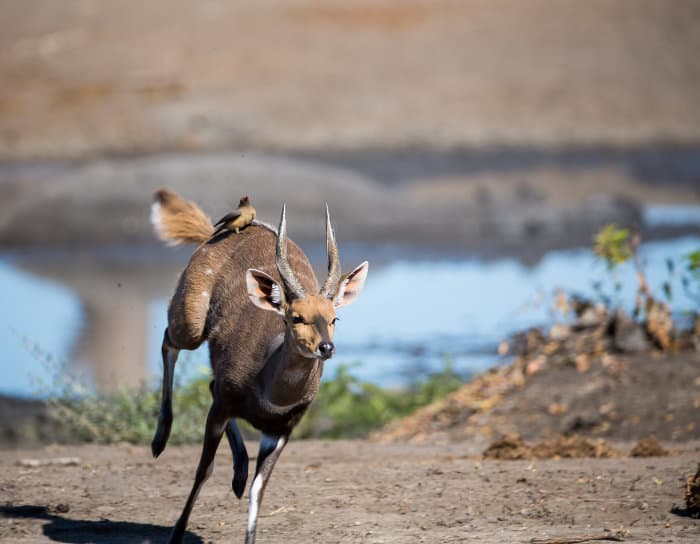 The Cape bushbuck is mostly nocturnal in nature. They will be busy at night until the early morning, grazing and standing around, observing their surroundings. When the sun is up they will mostly be lying about, out of sight, resting in a shady spot.

You can see them during the day as well, so do keep an eye out for a mother tending to her young.

They are not the fastest runners but can jump almost two meters and are good at swimming. This is very handy to get away from certain predators.

These antelope really enjoy browsing and their jaws do get a good workout every day. They prefer a simple meal of leaves, herbs, flowers and twigs. Only on rare occasions will they actually graze.

What they eat obviously depends on the endemic vegetation that surrounds them and the availability of water.

How do such solitary animals with so many predators survive? Or thrive? 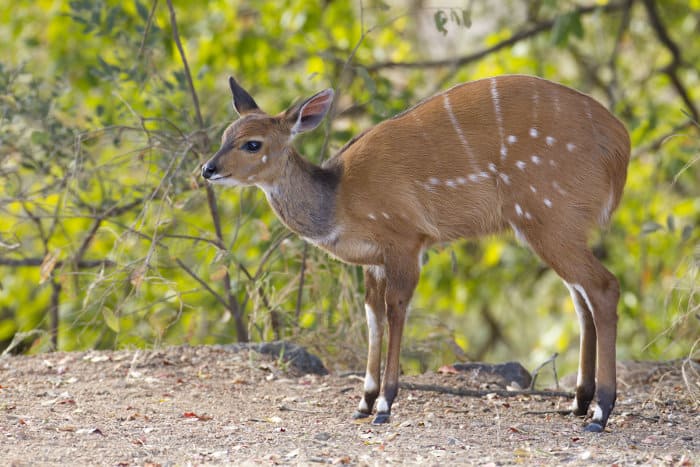 Bushbuck are incredible breeders, which explains how a relatively defenceless animal can be so abundant. Part of their success as a species is not having a specific breeding season. By staying close to permanent water bushbuck don’t need to maximise green season abundance.

Gestation is six to seven months, so a ewe is able to reproduce up to twice a year in some areas. In comparison, seasonal breeders can only give birth once.

After birth, the mother removes all debris susceptible to attract predators by eating the placenta and the young’s dung. A newborn remains hidden while the mother is browsing. At the age of four months the baby becomes strong enough to join its mother in her ventures.

The young leave their mother at around 11 months. Although both rams and ewes reach sexual maturity at this stage, they only start to breed when they reach social maturity at the age of three. 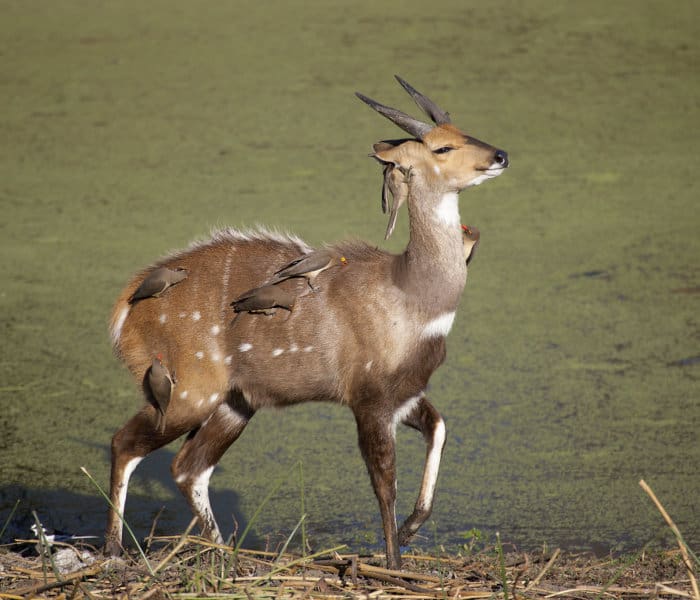 Such slow stealthy movers are prone to ticks. Because of their independent nature they don’t like birds to remove them. This can cause discomfort and bushbuck are prone to diseases transmitted by insects.

Yet, we have good news. The bushbuck is not endangered, even though they live to only 12 years in the wild and are prey to so many. There are over a million bushbuck in the wild in Africa and this number is still growing.

Just like Bambi escaped the hunters, bushbuck know how to stay alive in the forest. They may be shy but staying in stealth mode is certainly a good way to survive as a species.

Their numbers are mainly decreasing in places where human settlements have been expanding. Like all African animals, their future depends on habitat. If we can preserve the habitat, animals like the bushbuck will continue to thrive.

Hopefully their future is in good hands, and if you look out for the gentle African Bambi you will probably find them on your next safari.

Happy scouring for them! 🙂