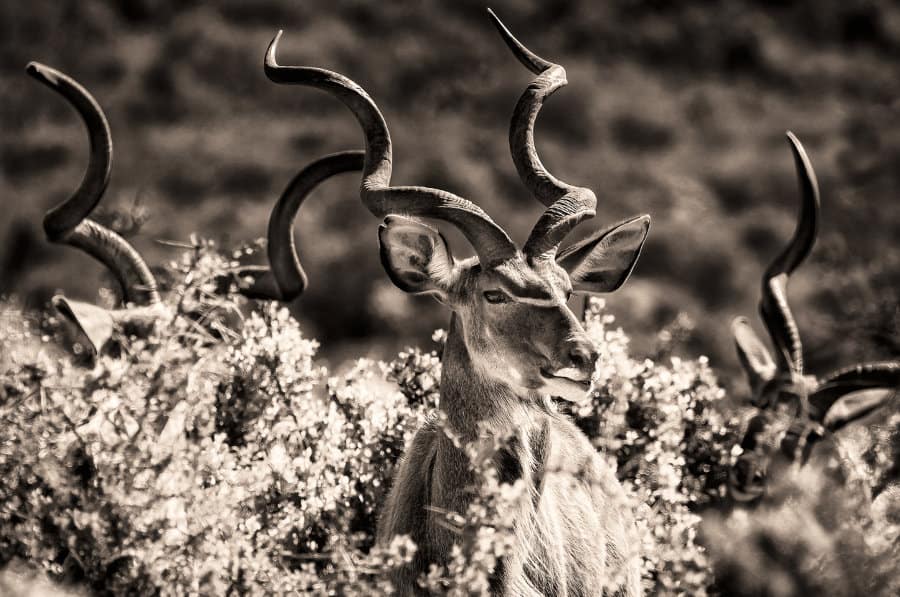 Africa is home to more species of antelope than any other continent. Many people from around the world visit the mainland to travel on safari, in hopes of seeing these magnificent creatures in their natural habitat.

Among the many types of antelope found in these regions, those with spiral horns are some of the most striking.

African spiral-horned antelope fall under the ‘bushbuck tribe’, or Tragelaphini. These ungulates are easily distinguishable from other African antelopes by their curly horns.

Meet the bushbuck, nyala, eland, lesser kudu, greater kudu, bongo, and sitatunga below to learn about their special quirks and characteristics.

Making up Africa’s antelope with spiral horns are eight species. To ensure you’re well versed on the different antelope types on your next African safari, here are several fun facts on the continent’s most revered horned animals. 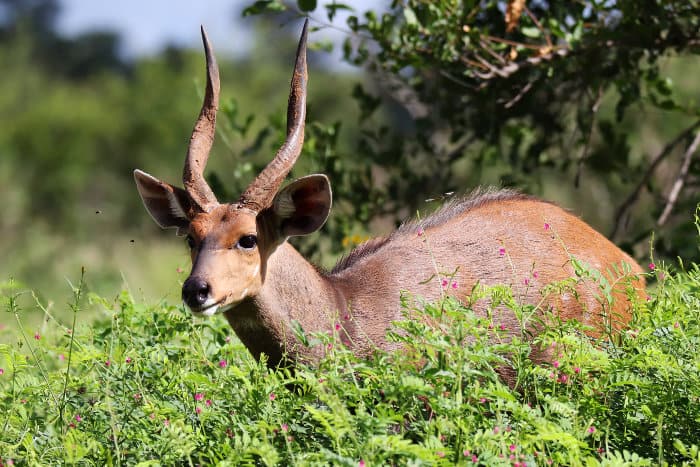 The bushbuck, scientifically known as tragelaphus scriptus, is a close relative to the nyala and kudu. It is most commonly found in sub-Saharan Africa, particularly in South Africa, Zimbabwe, and Botswana. Countries like Senegal and the southern half of Mauritania are also home to this unique species.

Bushbuck have a life expectancy of about 12 years in the wild. Inhabiting most of the African continent, their estimated population is over one million.

This is largely due to the antelope’s ability to forage, live and adapt to various climates. It can be spotted in rainforests, wooded savanna, sub-desert, fynbos and montane forest.

The average weight of the bushbuck is 58 kg, making it the smallest of Africa’s spiral-horned antelope. 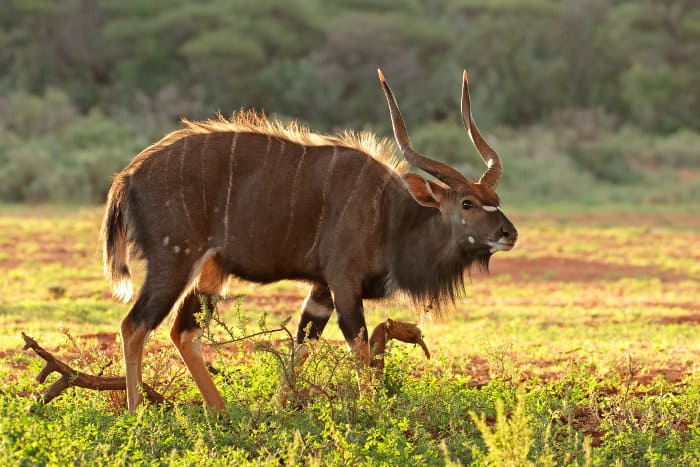 The nyala antelope, scientifically named tragelaphus angasii, is a rather secretive species more easily seen at night. These beautiful antelope have a slate-brown shaggy coat with white vertical stripes and spots on the flanks.

Nyala are also one of the biggest spiral-horned antelopes found in Africa. Males (bulls) are considerably larger than females (cows).

Nyala have a population of roughly 32 000 and are most commonly found in game reserves and private farms throughout Southern Africa. Places like Kruger National Park and Hluhluwe-Imfolozi are large strongholds of this magnificent antelope.

The success of their survival is predominantly based on a diverse diet. Nyala are essentially browsers, feeding mostly on leaves, flowers, fruit, twigs and fine grass. 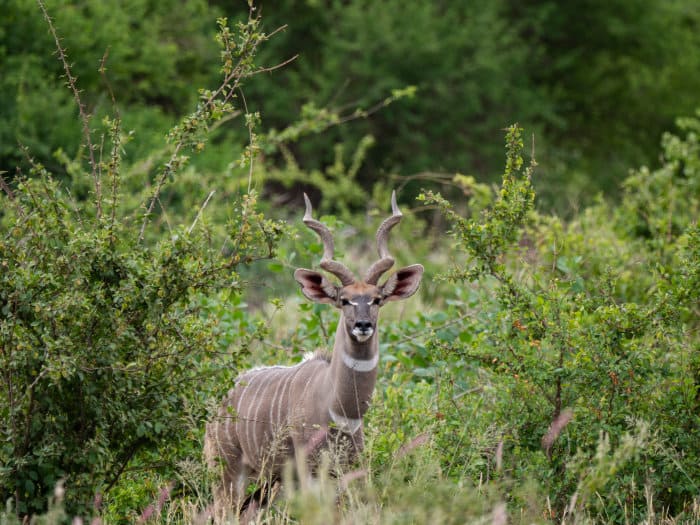 The lesser kudu is a striking species of antelope that resides in the arid and semi-arid areas of northeastern Africa. Most commonly, these incredible antelope occupy land in Ethiopia, Kenya, Somalia, Sudan, Uganda and Tanzania. The species was even documented at 1740 meters above sea level near Mount Kilimanjaro.

Lesser kudu males have large spiral horns which twist 2.5 times and can grow up to 70 cm in length. Their big ears allow for enhanced listening abilities. This, along with their colouration, makes the lesser kudu more difficult for predators to detect.

The total population of lesser kudus currently stands at about 118 000. According to the IUCN Red List, the species is near threatened and facing a downward trend. Hunting, human interference and decreasing habitat are detrimental to their survival. 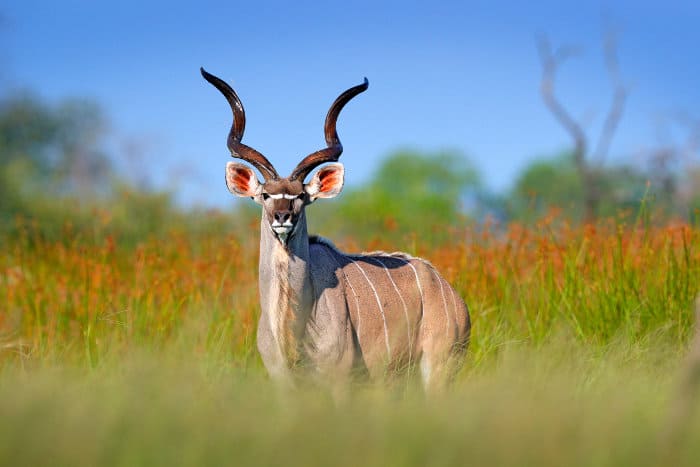 The greater kudu, or tragelaphus strepsiceros, is the largest of the kudu species. Males weigh 250 kg on average, with some even reaching 315 kg. This is truly astounding when you see one of these magnificent spiral-horned antelope leaping. The greater kudu can easily cover a 2 to 3-meter jump.

Similar to the lesser kudu, the greater kudu boasts an incredible red-brown to blue-grey coat. Yet the major difference between the two is that it has fewer vertical stripes running down the sides of its body.

It has a white beard that grows on its throat which, along with the impressive spiral horns, adds to the animal’s majestic appearance.

The greater kudu also has a different geographical location to the lesser kudu. It is most commonly found in the woodlands and bushlands of eastern and southern Africa.

Despite occupying widespread territory, this elegant antelope species is sparsely populated in most areas. This is mainly due to poaching, deforestation and declining habitat. 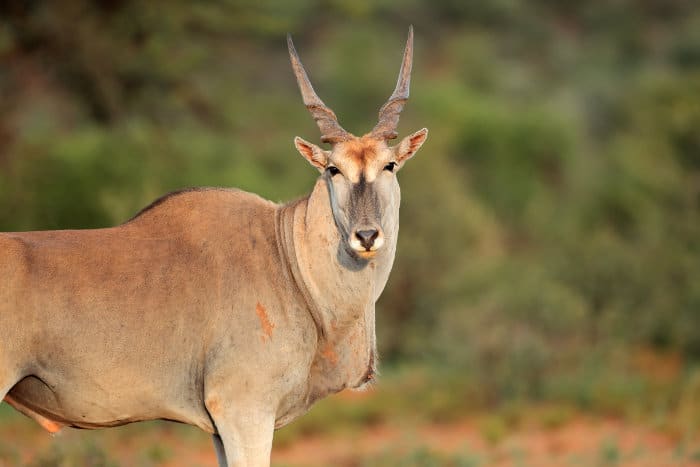 The common eland is the largest African bovid, however, it is also the slowest. These huge hunks of antelope are able to reach a maximum speed of 40 km/h, making it an easy target for predators.

Despite their slow speed, these large African antelope boast an impressive 3-meter vertical jump, as well as incredible endurance. As such, they are able to trot far distances without needing to take a break.

Although they may appear confident, these giant cow-like antelope are mostly shy. As a result, wild sightings of the common eland are quite rare.

An interesting characteristic of the common eland is the sharp clicking sound, which the tendons or joints in its forelegs produce when walking. While this odd sound still needs further investigation, scientists believe it may be a form of communication that other animals pick up on from up to a mile away.

The common eland has a stable population of around 136 000. The success of their survival is largely due to the antelope’s ability to adapt to various biomes including grasslands, deserts and mountains.

Similar to its gazelle and oryx relatives, the eland is able to conserve water by increasing its body temperature as much as 7ºC on hotter days. 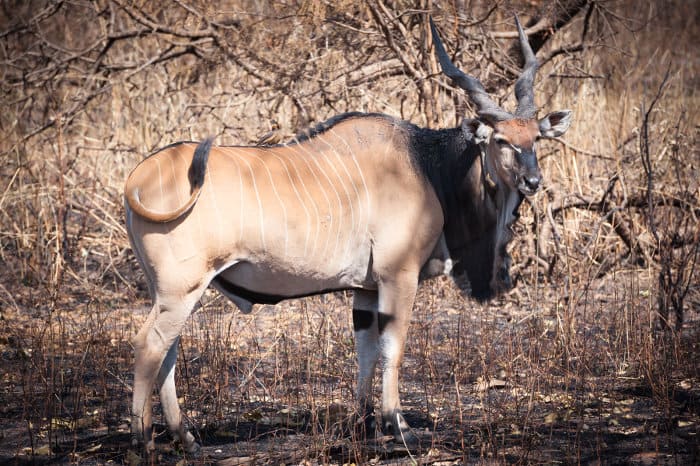 The giant eland is the largest species of antelope in the world and stands around 1.8 meters tall at the shoulder.

Even more impressively, these massive antelopes can weigh as much as one ton. They also have an elegant appearance, sporting a magnificent reddish-brown coat, marked with 8-14 vertical white stripes.

Despite their sheer size, the giant antelope is quite difficult to see in the wild. Moreover, they are vulnerable and are a common food source for a number of predators including lions, spotted hyenas and leopards.

Unlike the common eland, the giant eland is fairly quick and can reach a maximum speed of 70 km/h. They also boast an incredible vertical jump and can easily overcome heights up to 1.5 meters.

When it comes to habitat, this giant antelope species is rather adaptive and most commonly resides in the forests of western Africa, particularly in Cameroon. They are also found in broad-leafed savanna, woodlands and glades. 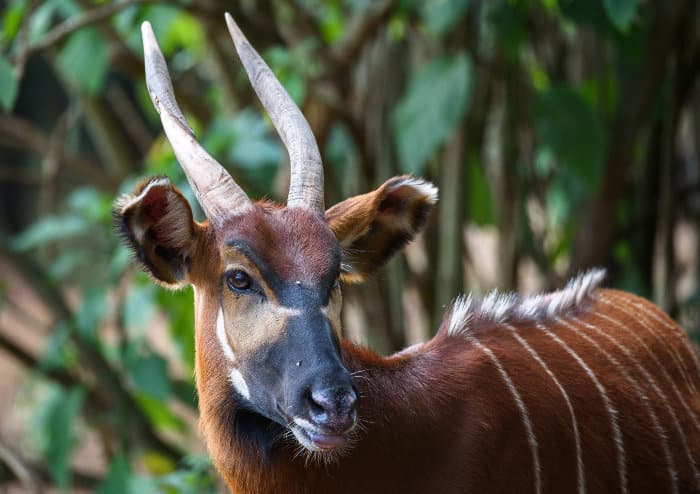 The bongo antelope has two recognized subspecies – the mountain or eastern bongo and the lowland or western bongo. They are the largest forest antelope found in Africa.

The bongo is truly beautiful, boasting an auburn coat with several vertical white stripes running down its side. Their distinctive coloration helps them identify one another in their dark forest habitat. An outstanding feature for both males and females is their spiraled, lyre-shaped horns.

Bongos are shy animals and are therefore tough to come by. As a result, the population size of the African antelope is unclear, however, studies have reported that there are fewer than 150 bongos left in the wild. The decline in their numbers is due to deforestation and hunting.

Bonus fact: Native people believe that if they eat or touch a bongo, they will experience spasms similar to an epileptic seizure. As such, these African antelope remain unharmed for the most part in their native ranges. 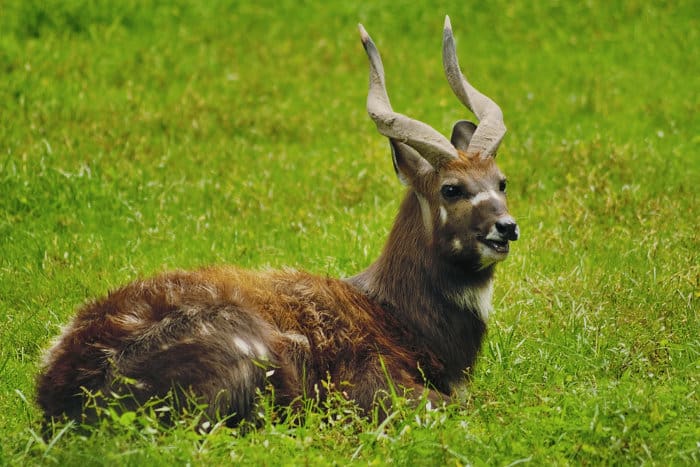 Sitatungas are the most aquatic antelope species: they are swamp-dwellers and excellent swimmers.

Unlike other antelope, they have elongated, wide-splayed hooves which help them walk through soft, muddy terrains. When alarmed, sitatunga sink into the water to deeper spaces with nothing but their nostrils still above the surface.

The hind legs of the sitatunga generally grow longer than the forelegs, giving the antelope a hunched appearance.

Males have incredible ivory-tipped, spiraled horns and are grayish-brown.

Females and juveniles are lighter in colour and have a bright, red-brown or chestnut-coloured coat.

Sitatunga have a population of around 170 000 and are found in swamps, forests and savannas in various parts of Africa.

Some of these places include Cameroon, Uganda, Sudan, Rwanda, Angola, Kenya, Ghana, Botswana and Zambia.

The African continent is home to an array of unique spiral-horned antelope species, all varying in colour, shapes and sizes.

Each species also has its own outstanding characteristics and behavioral traits.

Next time you head out on an African safari, try to see if you can identify each of the Tragelaphini species mentioned on this list. 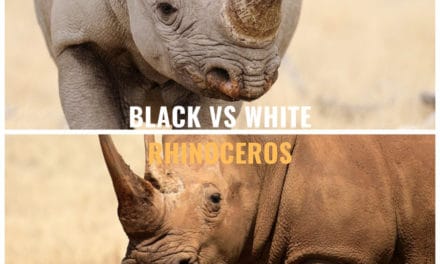 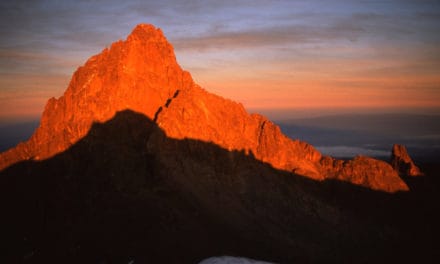 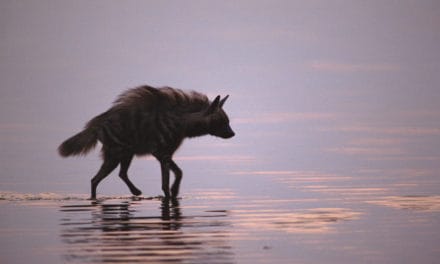 5 places to experience Cape Town without breaking the bank