Spot a nyala in the wild and you will always remember the sighting.

Nyala are spectacular antelope. They are also very bashful. It’s rare that they come out into the open and you must search patiently to see one in the wild – which only makes the sighting even more special.

Here are 16 incredible facts about the nyala. You’ll discover that this is one of Africa’s most unusual and magnificent species.

Nyala are the most sexually dimorphic antelope in the world. The females are relatively small, weighing between 55-68 kg (121-150 lbs) by adulthood. Males are double the size!

Standing 110 cm at the shoulder, big nyala bulls appear even bigger due to their horns. They weigh up to 125 kg, although that still doesn’t make them one of the 10 largest antelope species in Africa. 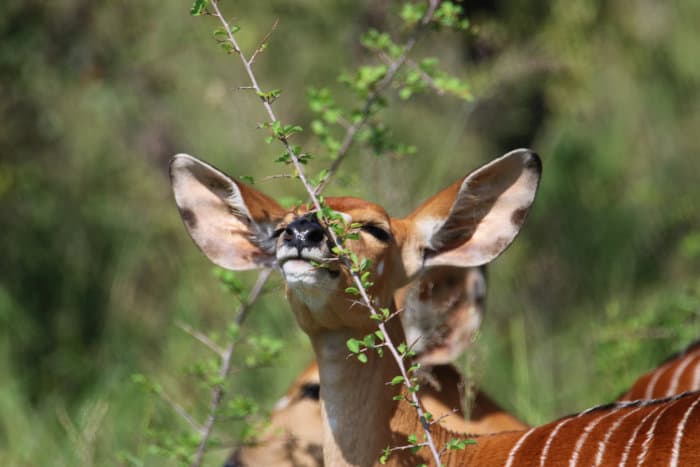 A varied diet has helped nyala become widespread across Southern Africa. Most of their food comes from browsing broad-leaved plants.

They also strip bark off different trees and will happily graze on grass as well, especially newly sprouted grass.

Such diverse eating habits help them survive in all sorts of forests and savannahs.

3. Living in and around woodland areas

Nyala are not very fast. Nor are they particularly strong. Their defense against predators is their camouflage.

Nyala are experts at hide and seek and usually live deep within a woodland or forest.

They will only emerge in the morning or afternoon to feed on reeds and grasses. During the hot and wet summer they stay in the forest all day, only coming out after dark.

4. Friends with the monkeys and baboons 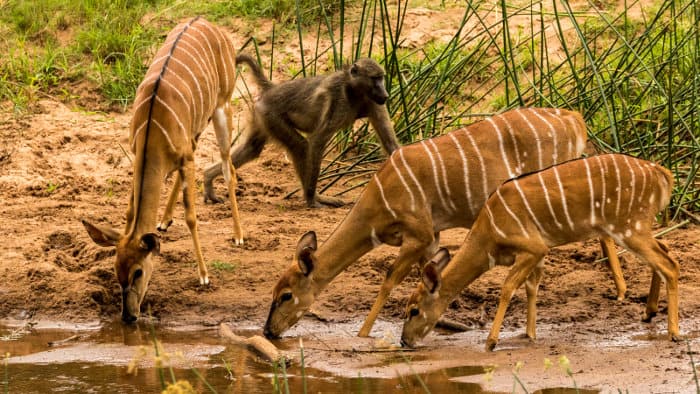 Nyala have developed a special bond with baboons and vervet monkeys, their fellow residents in the trees.

The antelope eat all the fruit that is dropped by their primate friends. They can also react to any alarm call made by primates higher in the trees.

But what do the monkeys get out of this relationship?

Nyala are one of Africa’s most alert antelope. They sense danger using their exceptional hearing and smell, as well as by sight.

Nyala look out for each other and when any nyala spots danger, it gives off a striking alarm call.

The sharp, high-pitched sound is almost like a barking dog. It warns others in the group and also gives a warning to baboons and monkeys. 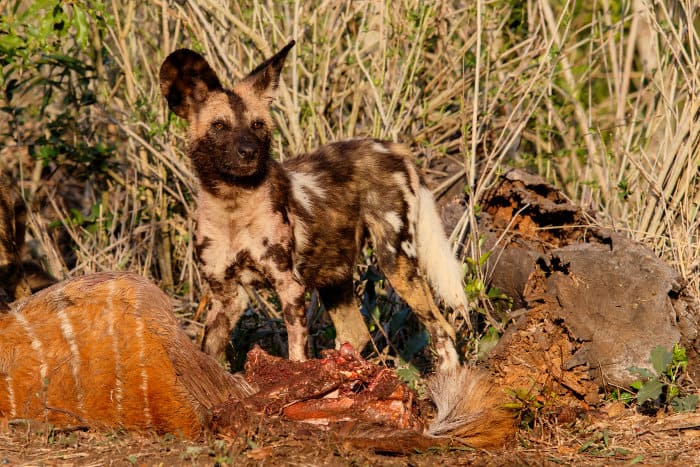 They need this warning call because nyala are on the dinner menu for the three most impressive African predators.

In general they are a little small for a lion, especially given how hard they are to locate and catch. Mostly it is bachelor lion prides who will go after them, rather than larger prides.

Nyala are perfect for leopards, who also live in the trees. They are also hunted by packs of wild dogs in the Okavango Delta and northern Botswana.

Females and young males are memorable for their striking white stripes. Each nyala has more than ten of these vertical stripes and these are the best feature for distinguishing nyala from kudu.

It’s believed that juvenile males first develop a coat that can disguise them as females, therefore avoiding any jealous behaviour from larger bulls. 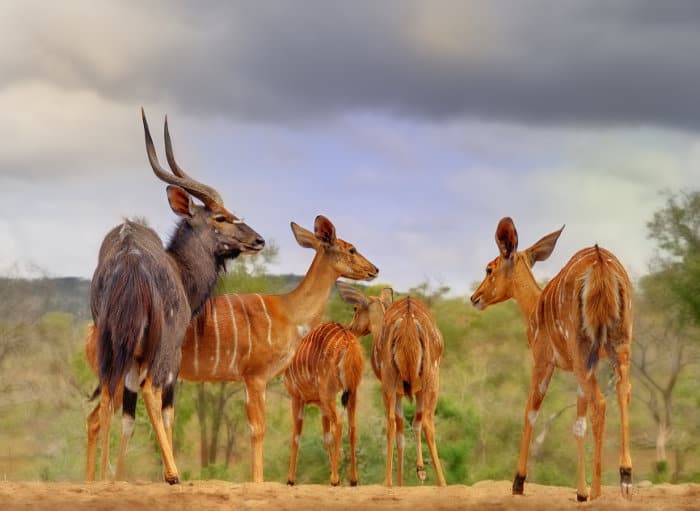 Many of Africa’s mammals have clearly defined social structures. For example, impala and buffalo live in harems, the females and calves with one dominant male, then all the bachelors in smaller groups.

Nyala are wanderers. They are the nomads of the antelope world. Although herds can reach up to 30 individuals, they usually live in loose groups of four to eight animals. 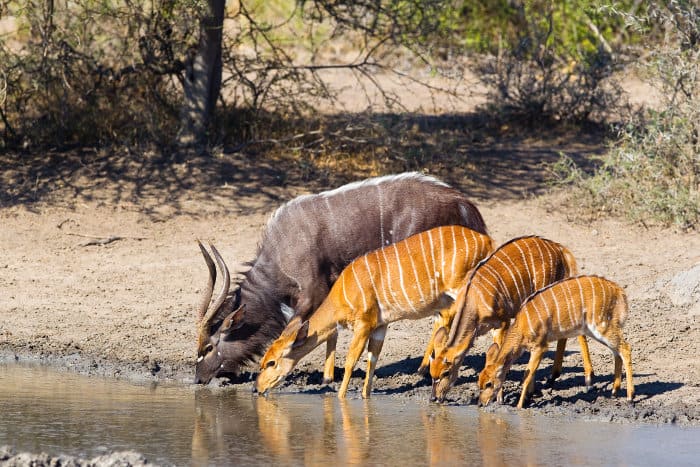 All these groups are temporary. Nyala join. Other nyala leave. New groups are formed. A larger bull butts in and kicks out another bull.

At the same time, the dominant bull will happily allow other bulls to be in its group, as long as they remain submissive.

A mother maintains a strong bond with her two youngest calves, but she loses touch with older offspring. Males become solitary as they grow older, as they are fended away from joining new groups.

Does this nomadic behaviour mean that nyala are social or not?

They certainly shy away from strong social bonds.

Nyala don’t have clearly defined territories either. The groups wander around and don’t attempt to protect an area from others. 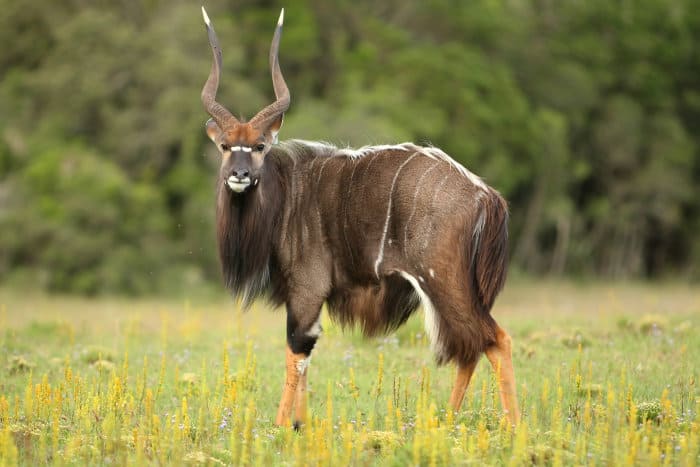 Males develop horns from a young age. It’s only when they reach full maturity that these horns develop the trademark double twist.

Look closely at the horns and you will notice they have a peculiar yellow tip – researchers still don’t know why, perhaps it’s just for aesthetics.

These horns are used in battles to decide dominance and hierarchy within a group.

Bulls thrash their horns in the air, demonstrating the weapons at their disposal. They try to exaggerate their size and power, lifting their head high and posing before a rival.

11. Savage and fatal battles between bulls

Battles are dramatic and brutal. Over 100 kilograms of force crashes into a rival, with the spiked horns often drawing blood.

Bulls keep fighting until one backs down. Upon defeat, a bull will turn away and wag his tail in a show of submission.

Some of these battles are fatal, through concussions or wounds that later become infected.

12. Dramatic shows to impress the females 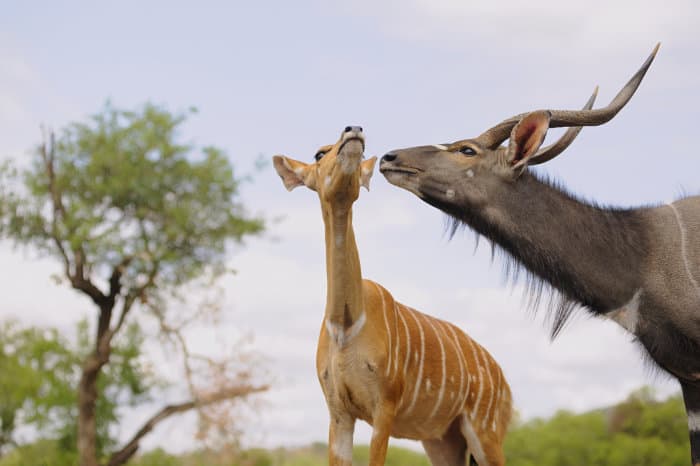 To the victorious bull comes the chance to breed. But after winning the battle to lead a group, the victorious male doesn’t automatically get the females.

Using bizarre stuttering movements the nyala bull will slowly dance within a group of females, raising its head to show off its white underfur.

Nyala have a very raunchy way of breeding. If a female is on heat the male follows her on foot, pushing his nose between her legs. He gets so excited he butts her hindquarters straight off the ground.

If a female is receptive after this peculiar foreplay she stops walking. Rather than mount straight away, the bull walks around and presses her head down. Only when this submissive position is achieved does the bull climb on top. 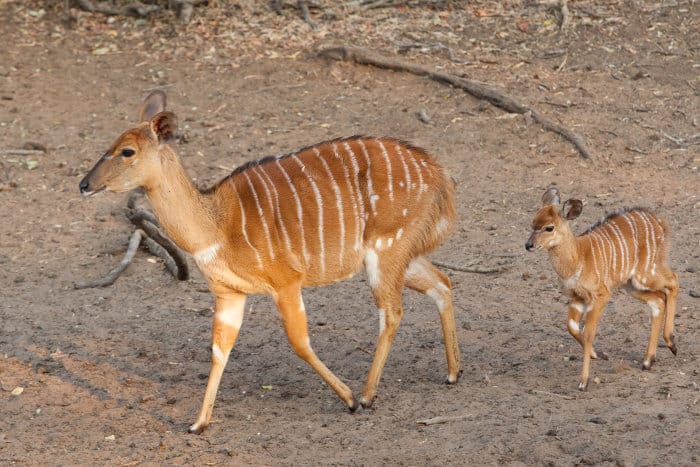 Newborn nyala are easy prey for many predators. Females hide in thickets, deep inside thick woodlands. Here they give birth and hide their calf for the first three weeks of its life.

Gestation is 220 days and ewes are able to conceive as soon as they reach 14 months of age.

Homo sapiens (ourselves) have only evolved in the last 200 000 years. Stretch our evolution back 5.5 million years and we were the same hominid species as chimpanzees.

In contrast, the nyala evolutionary line has remained separate for 5 million years. This makes them one of the oldest antelope, behind the lesser kudu.

16. Nyala can be seen in South Africa, Swaziland, Botswana and Zimbabwe 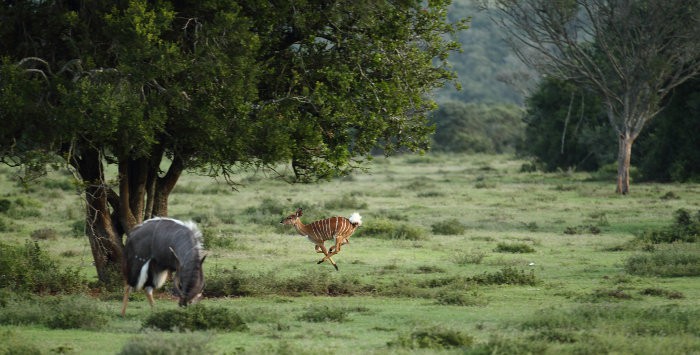 The largest nyala population is in Kruger National Park, the main highlight of a South Africa safari.

Swaziland has a number of groups and this country makes for a great budget safari.

Nyala have been introduced to Botswana and they have thrived in the area between the Okavango and Chobe. Here there is all the food they could want, along with permanent water and trees to hide in.

You can also see nyala in the north of Zimbabwe, in parks along the Zambezi River.

On a safari you’re most likely to spot these majestic antelope at a waterhole or along a river. Explore a woodland and you can easily miss them.

If you are lucky enough to see one it’s likely to be towards the top of your safari sights. Not many are this privileged.

So good luck and happy safari!