Think of Africa and you can easily think of gorillas, chimpanzees and baboons. Don’t forget about colobus monkeys. They are one of the most memorable and lesser-known wildlife highlights of visiting Africa.

This article celebrates the colobus monkey with 17 incredible facts. 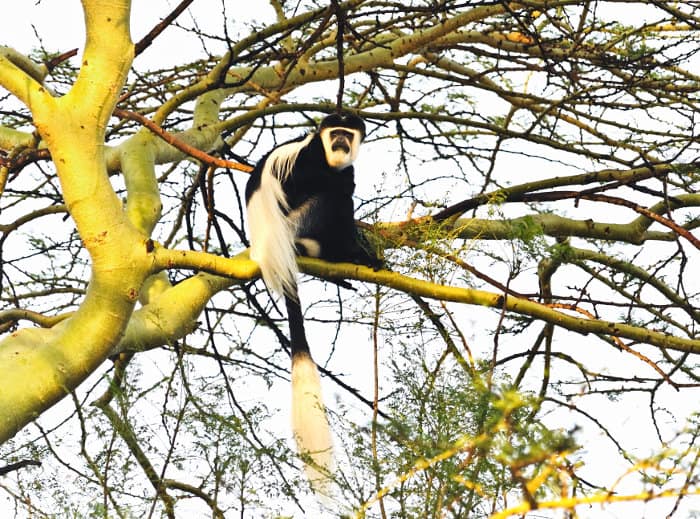 Many monkeys are playful and aggressive. They will jump at people, grabbing any food from their hands. Vervet monkeys gather around restaurants to steal food from tables.

But colobus monkeys are chillers. They hang in the forest canopy, dreaming the day away. There’s nothing frenzied or fast about them. Spot a colobus monkey and it impresses the laid-back rhythm of the African wilderness.

2. Colobus monkeys are unique in that they do not have thumbs

How odd! But completely true. Almost all primates have opposable thumbs, allowing them (and us!) to pick up things and eat with one hand. Not colobus monkeys. Rather than live on the forest floor, they are adapted to live high in the trees, where such dexterous thumbs aren’t as important.

3. Some colobus monkeys are hunted by chimpanzees 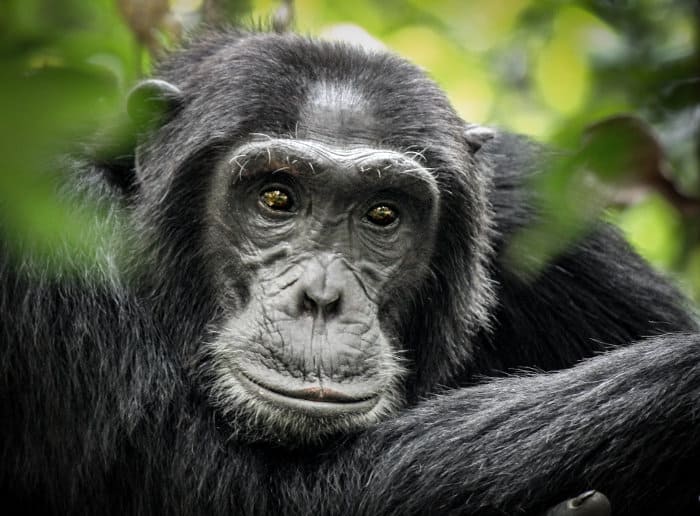 How shocking! In the forests of Uganda’s Kibale National Park, chimpanzees have hunted colobus monkeys to the point of extinction.

They kill red colobus monkeys for meat to supplement their fruit diet. On average, troops will kill three monkeys on every successful hunt. They also go after black and white colobus monkeys in the same park.

This behaviour has been reported in other national parks as well, including those in the Congo Basin and East Africa.

4. Where do colobus monkeys live?

All species of colobus monkeys live in closed forests. They prefer the canopy, rather than the forest floor, so unlike other primates such as baboons, colobus aren’t comfortable on the savannah.

They particular like montane, mopane and gallery forests. Bamboo stands are another favourite place for the monkeys to reside. You can also encounter them close to the coast, in forests that hang over East Africa’s beaches. 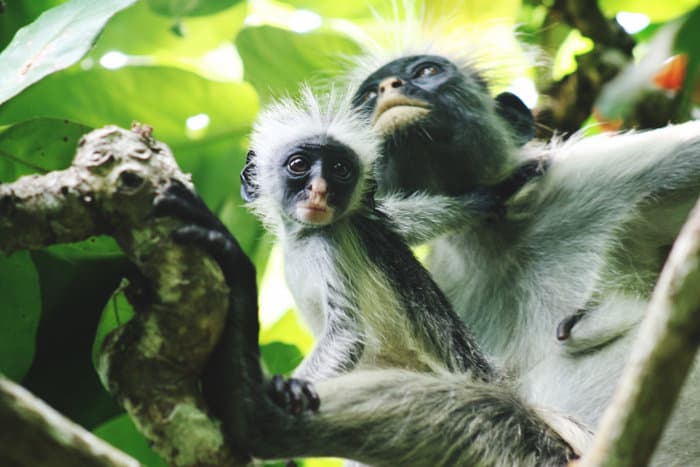 That’s a pretty perfect number. There are enough monkeys to look for danger and protect a territory. But not enough to deplete a food source or create too much trouble between themselves.

Vervet monkey troops are much larger and you’ll regularly see these monkeys fighting among each other. Colobus monkeys live in troops a similar size to gorilla troops, where there is a dominant male but everyone tends to get on with each other.

6. Colobus monkeys can live to 20 years in the wild

Let’s compare this to other primates. Vervet monkeys can only survive 12 years in the wild, chimpanzees reach 40 to 50, while very few macaques make it to 15 years.

7. Humans have exterminated these monkeys from some areas 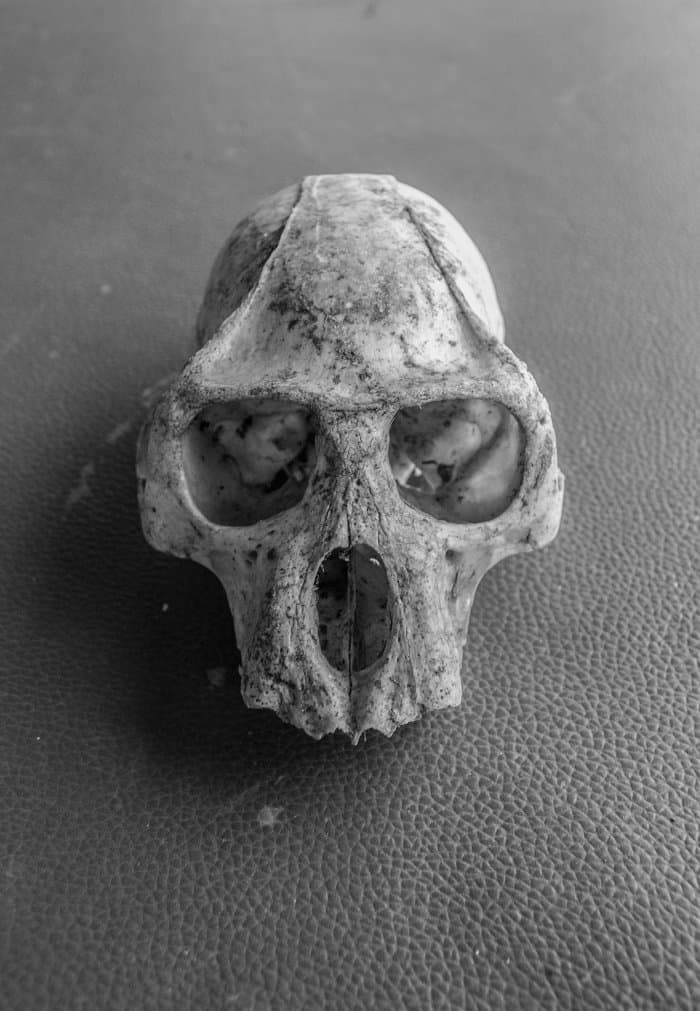 When colonialists arrived in Africa they couldn’t get enough of colobus monkeys. Their beautiful skins were used to make hats, capes and dance costumes.

Best of all for hunters, these monkeys aren’t skittish. They just relax in the treetops, a sitting target for any rifle. So while colobus monkeys remain widespread, many localised populations have been lost over the last 300 years.

8. All colobus monkeys are old-world monkeys

They evolved around 2 – 4 million years ago. If you follow the family tree back another few million years, you’ll find that these monkeys have the same ancestors as us.

9. There are five different species of colobus monkey 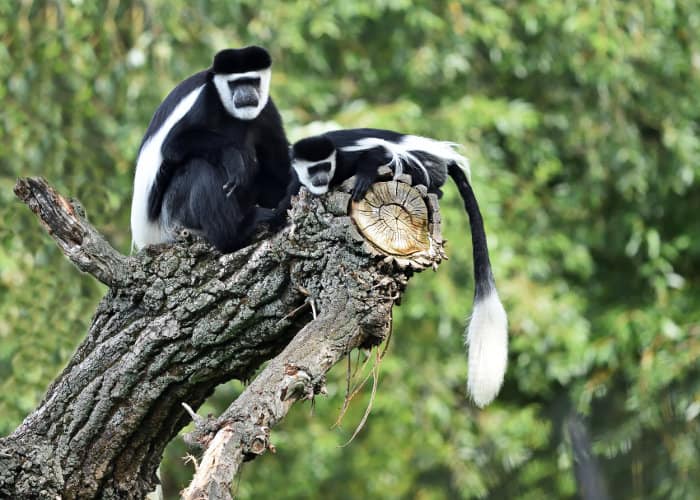 All these species live in sub-Saharan Africa and each has subspecies as well. Unlike giraffe or elephant, these different species have overlapping ranges. So you can see more than one of them in the same park.

10. One colobus species is known to eat concrete

The mantled guereza is native to West, Central and East Africa. It takes its name from white fringes of hair that run straight along its body, known as a mantle.

Amazingly, they have been reported to eat concrete. Yep, as well as fruits, flowers, bark and soil, the mantled guereza has been eating buildings within national parks! 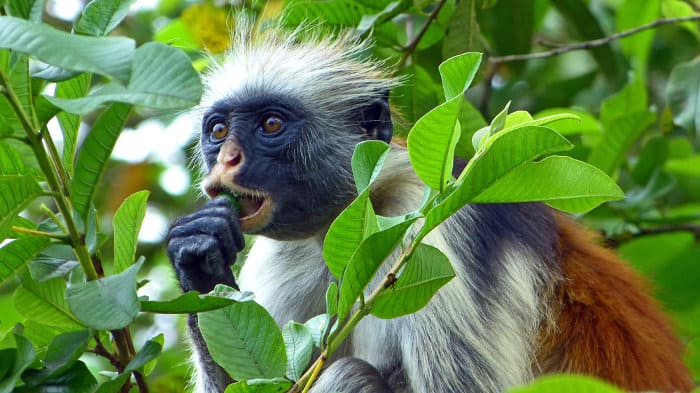 How can anything eat concrete? Colobus monkeys have a four-chambered stomach, allowing them to process foods that would make any other primate sick.

As well as concrete, this allows the monkeys to eat unripe fruit, so they have an advantage over many other forest species. They can protect their home territory rather than be on the move looking for ripened fruit.

12. Black and white colobus monkeys are easily seen on the beach in Kenya

The most striking of them all, black-and-white colobus have a thick white beard that surrounds their face. Their tails are most impressive, curling down from the canopy then snapping into action when they jump between trees.

You’ll find these monkeys all across Kenya, sometimes very close to urban areas. They live around the campsites of Lake Naivasha and can be seen next to the white sand of Diani Beach.

13. Black colobus monkeys are known to be satanic 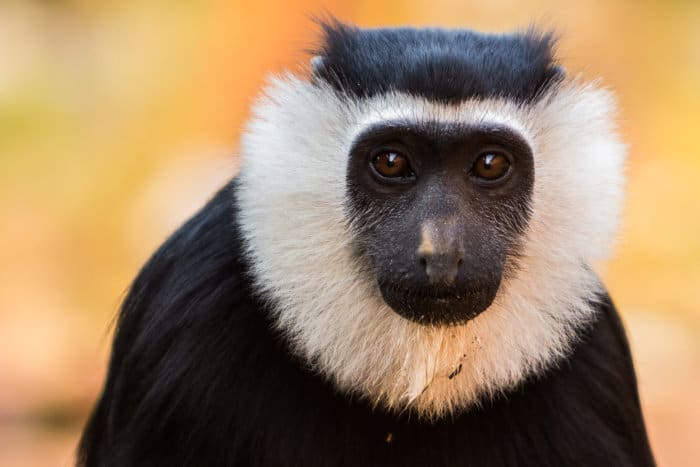 Also known as the satanic black colobus due to its fierce facial expressions, these monkeys are endangered and are only found in a small area of West Africa.

Realistically you’ll need to visit Gabon or Equatorial Guinea to see them, with the largest population living in Lope Reserve, Gabon. Or you can search for a rare coastal subspecies that’s only found on Bioko Island off Cameroon.

14. An endemic red colobus monkey can be visited on the island of Zanzibar

Red colobus monkeys have the same black and white faces, plus a distinctively red fur coat. There are various subspecies and all of these are considered vulnerable or endangered.

Around 1000 Zanzibar red colobus live in Jozani Forest, a small national park in the middle of the island. It’s a great half-day trip during a stay in Stone Town.

15. Ursine colobus monkeys are born with an all white fur coat 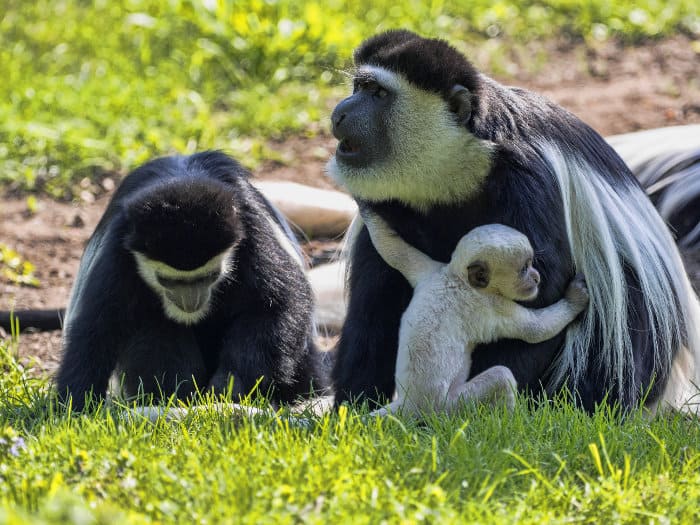 Spotting these babies is very difficult. They live in the remote forests of West Africa, including in Ghana and Togo.

Youngsters come out completely white and only gain their black fur after three months. Like all primates they aren’t able to walk at birth; colobus monkeys must be carried by their mothers.

16. Colobus monkeys are prey for eagles and leopards

Along with chimpanzees, colobus make a favourite meal for leopards. The stealthy hunter creeps across the tree branches and can hunt both young and old monkeys.

Eagles can carry off prey that is many times its own weight. Colobus like the forest canopy as it has good food and keeps them clear of lions and other predators. But while they are chilling they may be grabbed by eagles.

17. The main threat to colobus monkeys is ourselves 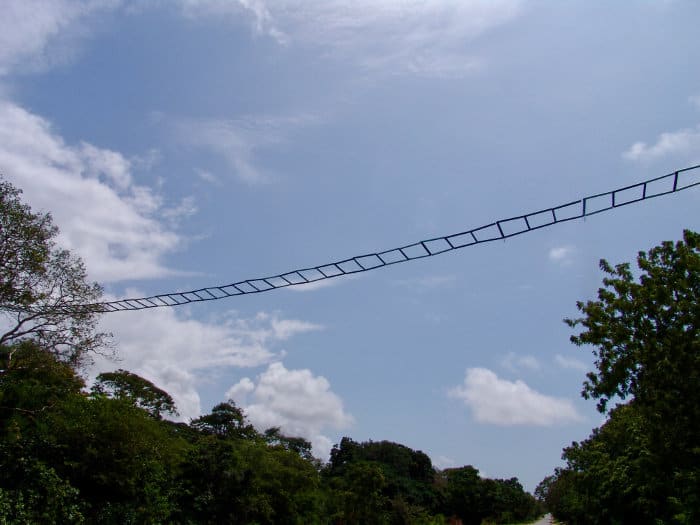 Unfortunately, people are the main reason colobus monkeys are endangered. Their numbers continue to fall. 🙁

They are still hunted for bush meat and their incredible fur.

The biggest problem is human attitude to the wilderness. Colobus monkeys are losing their natural habitat, as forests are chopped down for logging, agriculture and human settlements. 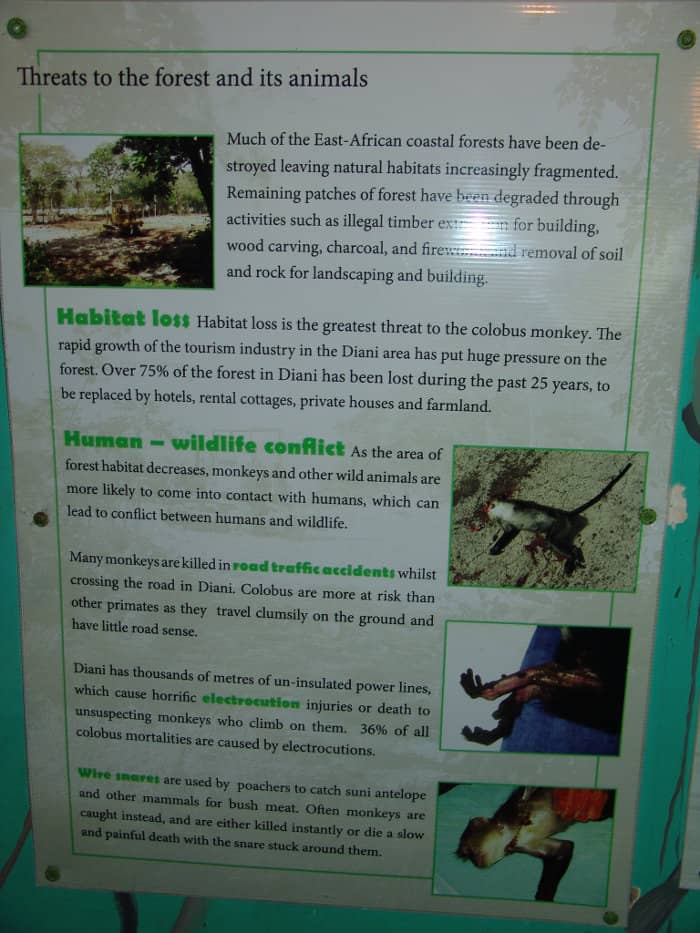 Habitat degradation and habitat fragmentation makes it harder for these monkeys to survive. Colobus like to be deep in the forest. When trees are chopped down it has a huge impact on where they can survive. While some species can survive on the fringes, colobus can’t.

But we can do something about it. Just visiting Africa and seeing a wild colobus monkey helps to spread a positive message. The more people who encounter these monkeys the more their story will be shared, and hopefully colobus monkeys will be around for future generations. 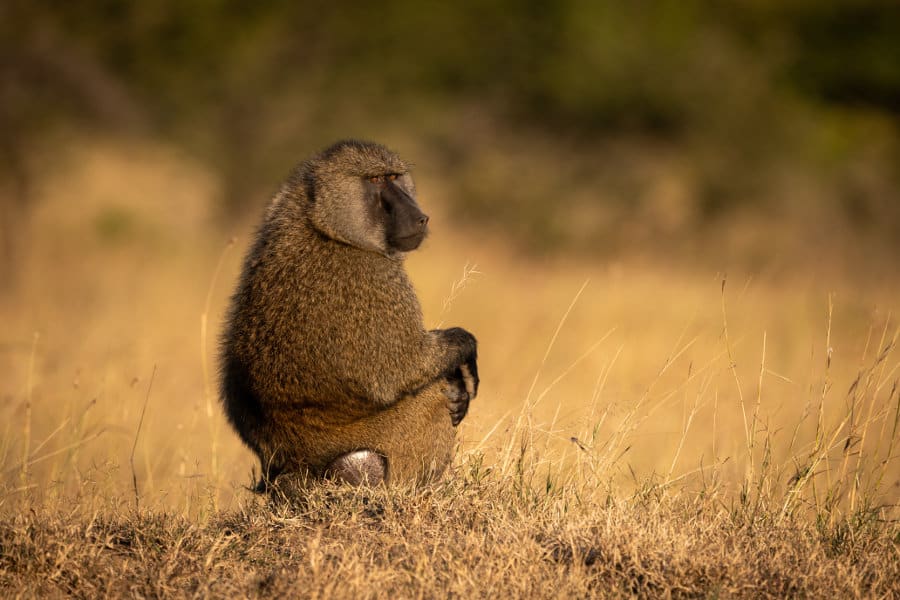