Africa is home to the red colobus monkey, a remarkably diverse group of primates. They are the most threatened group of non-ape primates in Africa and face a variety of dangers. The primates’ beautiful fur and lack of fear towards humans makes them the unfortunate target of hunters.

Discover more about the appearance, diet, and population of the red colobus monkey below. 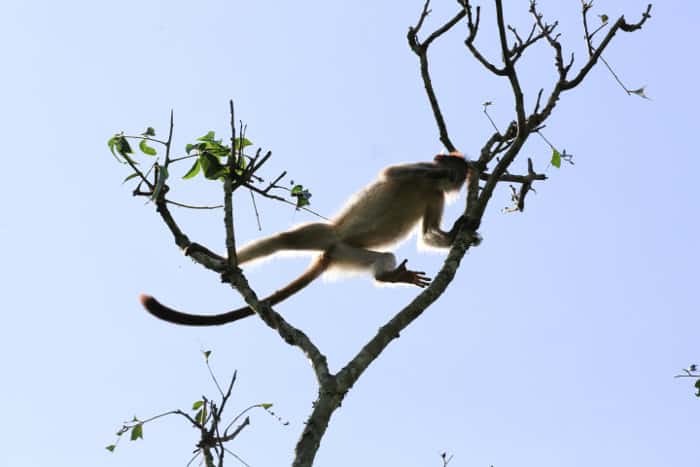 Monkeys are either classified as new world or old world. The Piliocolobus species falls into the latter category. They are closely related to the black-and-white colobus monkeys and are often found in groups alongside the blue monkey.

Primarily found in forests, the species has evolved to leap between trees. It also has long fingers and a small bump instead of thumbs.

Each species of red colobus monkey differs in appearance. It typically has brownish-red fur on the body, with a patch of black to chocolate brown fur on the head.

It has pink lips, nose, and eye rings with a black band of hair extending from above the eyes to the temples. The fur on the underside of the body is lighter than the fur on its back.

The monkey’s tail is between 58-77 cm long and is dark brown at its root. Adults grow to a body length of 45-65 cm and weigh between 5.2 and 11.3 kg. Females tend to have shorter canines, thinner tails, and slightly smaller skulls.

Infants have black and white coats, with the full colouration only appearing between 6 and 11 months old. 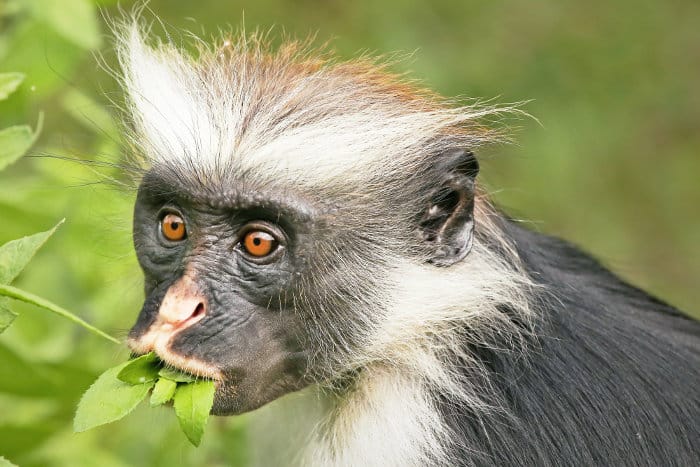 Eating a varied diet, the red colobus’s stomach is larger than those of similar-sized monkeys. It endures long digestive periods to extract the most nutrients from its food.

There are 16 distinct forms of the red colobus monkey that make up the diverse Piliocolobus species.

It appears as endangered on the International Union for Conservation of Nature’s Red List of Threatened Species.

Lang’s red colobus monkey, Piliocolobus langi, lives in lowland rainforests in the northeastern portion of the Democratic Republic of Congo. This species suffers from significant hunting pressure and habitat loss.

The Lomami red colobus monkey, Piliocolobus parmentieri, is endemic to the Democratic Republic of Congo. Field surveys conducted in 2007 in the area of its historic range failed to reveal any evidence of the animal. In 2016, the species was unexpectedly found near the village of Lokobekobe.

Miss Waldron’s red colobus was first discovered in 1933 by a British museum collector. It has come close to being the first primate declared extinct, with no sightings of the monkeys since 1978.

Niger Delta red colobus monkeys, Piliocolobus epieni, are endemic to the marsh forests in the western part of the Niger Delta. The species is critically endangered due to hunting and habitat loss.

Pennant’s red colobus monkey, Piliocolobus pennantii, lives in lowland, mid-montane tropical moist forests and marsh forests on the Equatorial Guinea island of Bioko. The species is critically endangered, with fewer than 1200 animals living in the southwestern parts of the Gran Caldera Scientific Reserve.

Preuss’s red colobus monkey, Piliocolobus preussi, inhabits high-canopy, lowland, mid-altitude, and sub-montane forest in Cameroon and Nigeria. Listed as critically endangered, it is present in the Korup National Park in southwestern Cameroon and the Cross River National Park in the southeastern corner of Nigeria.

The Semliki red colobus monkey lives in the catchment of the Semliki River in the Democratic Republic of Congo. First described in 1991, they may have already been on the brink of extinction.

Tana River red colobus monkeys, Piliocolobus rufomitratus, occupy riverine and flood-plain forests along a 60 km stretch of the lower Tana River and the Tana Delta in Kenya. The current population is around 1000 monkeys and may reduce by 80% over the next 50 years.

Tshuapa red colobus monkeys, Piliocolobus tholloni, are vulnerable due to threats from unregulated bushmeat hunting and habitat loss. The species is endemic to the Democratic Republic of Congo and lives in forests south of the Congo River and west of the Lomami River.

Udzungwa red colobus monkeys, Piliocolobus gordonorum, inhabit a variety of forest habitats in the Udzungwa Mountains, Mwanihana Forest, and elsewhere. They have an estimated population of 35 000 monkeys and are vulnerable due to habitat loss and hunting.

Western red colobus monkeys, Piliocolobus badius, live predominantly in forest, woodland savanna, and mangroves. While preferring to travel on larger branches in the main canopy at the height of 20-40 m, northern populations spend time travelling, resting, and feeding on the ground.

The Zanzibar red colobus, Piliocolobus kirkii, is endemic to Unguja Island and has an estimated population of 5862 mature individuals. The species lives primarily in ground-water forests and scrub forests along the southern and eastern sides of Zanzibar. 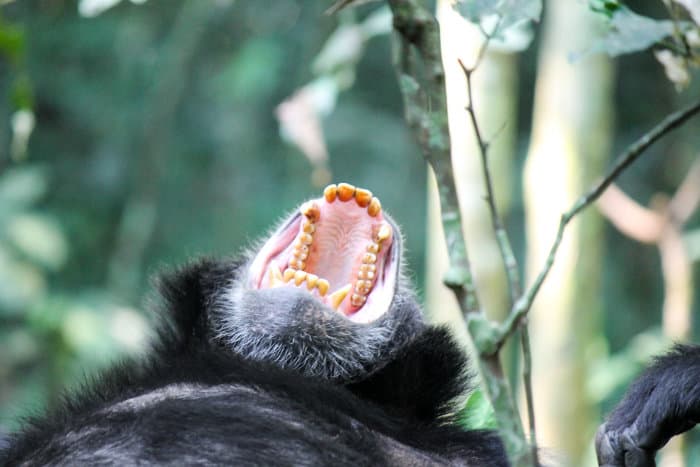 Travel on Safari to See the Red Colobus Monkey 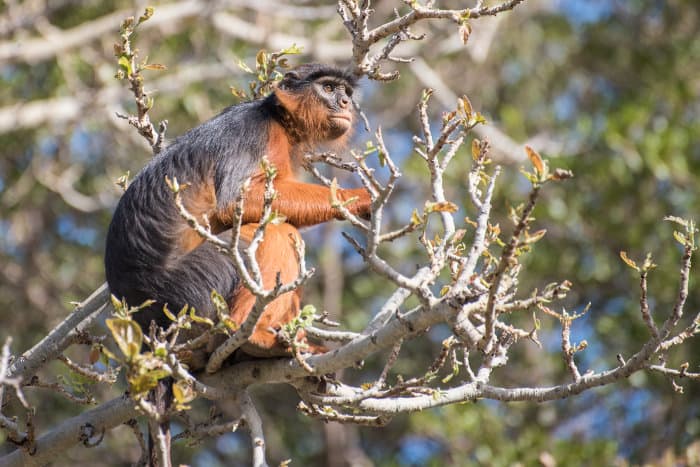 Seeing the red colobus monkey’s striking coat and relaxed behaviour in person will leave you admiring this old-world African primate. By protecting natural habitats and supporting tourism, the various species of red colobus monkey can hopefully survive for the enjoyment of future generations.

Book a safari to Uganda to see the red colobus monkeys in the Kibale National Park. 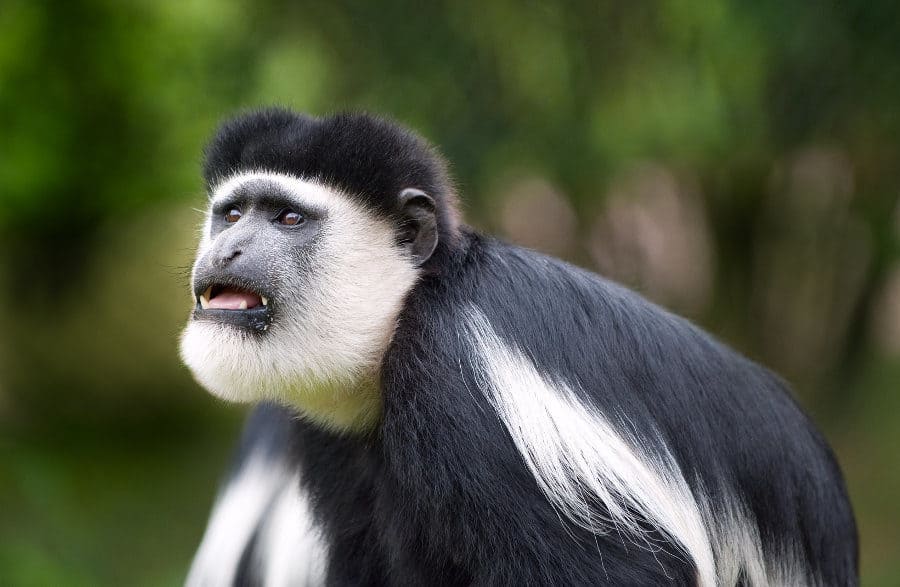 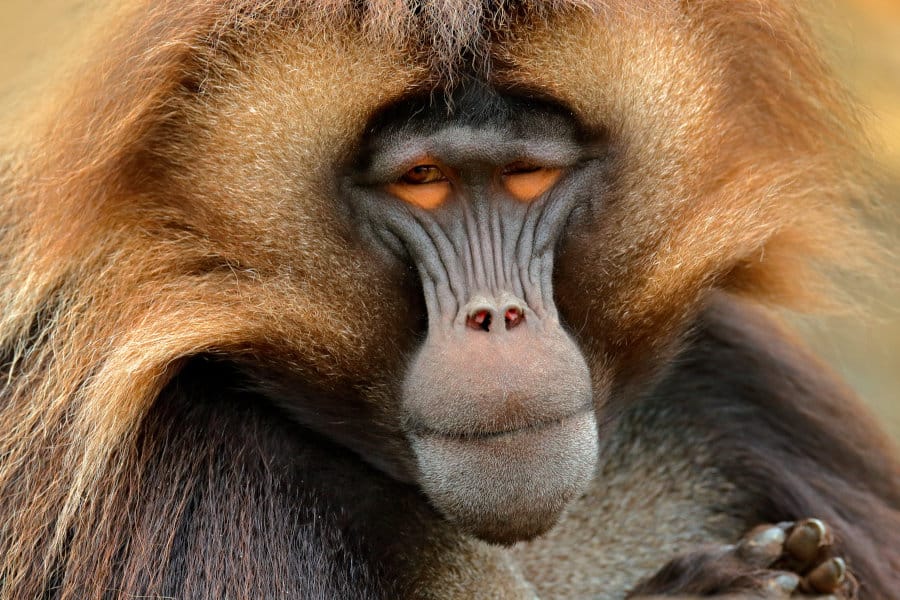