Confusion between hedgehogs and porcupines is as old as the hills. They’re both quill-covered, spiky-looking mammals that have established a place on the pop culture stage.

Many people could describe them as ‘spiky and cute’. Yet beyond this, as accurate as it may be, most descriptions fall short.

So what is the difference between a hedgehog and a porcupine? Where do they live, and what do they eat? Are hedgehogs rodents? And with which one should you avoid picking a fight?

In this hedgehog vs porcupine breakdown, you’ll learn everything you need to know about these quill-filled creatures. As well as some fascinating facts about porcupines, hedgehogs, and their curious little lives.

Is a Hedgehog a Porcupine? 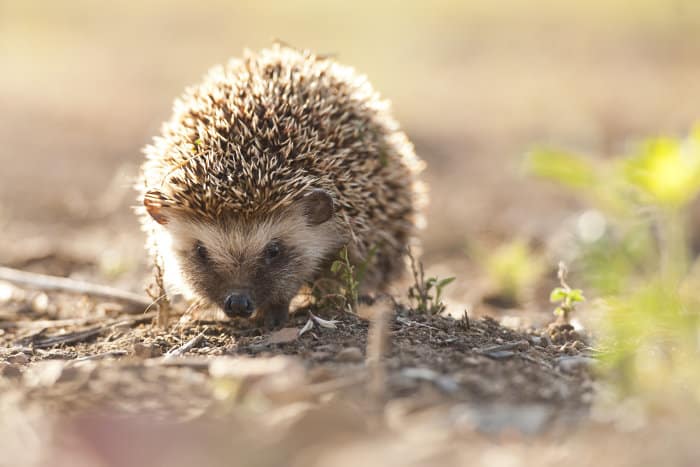 To put it simply, no. Hedgehogs and porcupines are two distinct animals, each with a range of unique characteristics.

In fact, beyond their spiky exteriors, there’s very little similarity between them.

What’s the Difference Between a Hedgehog and a Porcupine?

So, then, how exactly are hedgehogs and porcupines different from one another? The answers to this question reveal some captivating truths and tales about these peculiar creatures. So let’s dive in.

Are porcupines and hedgehogs related? 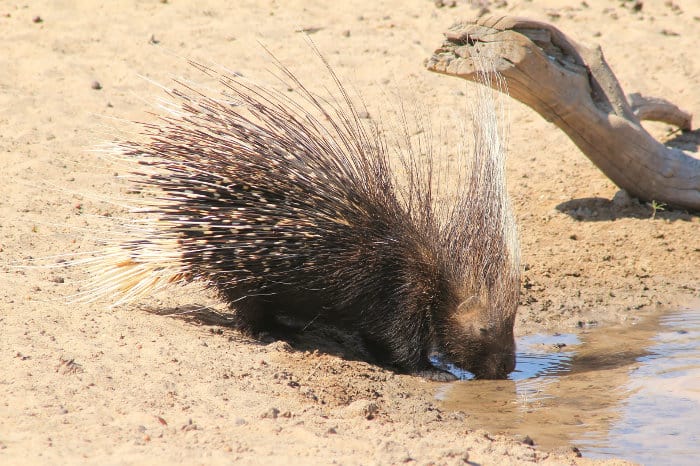 Although it’s relatively common knowledge that porcupines and hedgehogs are different animals, many still believe that they’re close relatives of one another. However, these two animals are actually hardly related at all.

While they’re both mammals, science has classified them in different orders. Porcupines belong to the extensive Rodentia order, making them more closely related to mice, rats, and beavers than to hedgehogs.

Hedgehogs, on the other hand, are part of the Eulipotyphla order. So their closer cousins are creatures like European moles and various types of shrews.

The terms hedgehog and porcupine each refer to fairly broad groups of related animals.

There are 17 species of hedgehog spread across the globe, and a startling 58 species of porcupines.

So even within each of these animal groups, there is a surprising level of diversity.

A matter of size

One of the key differences between these animals is their size. With such diversity in each group, it’s impossible to quote a blanket figure of their respective sizes.

However, one can safely say that porcupines can grow to be significantly larger than their little hedgehog counterparts.

In other words, while you might find a porcupine that weighs less than a kilogram, you certainly won’t come across a 35 kg hedgehog.

Wild hedgehogs are usually between 500 and 1000 grams in weight, though they can reach up to 2.5 kilograms in captivity.

This means that the average hedgehog is around the size of South America’s Rothschild’s porcupine – the smallest porcupine species.

Porcupines can range upwards from here in weight, with the largest species (the crested porcupine, mostly found in Africa) around the size of a small labrador.

In fact, only two species of rodent – beavers and capybaras – are larger than these enormous porcupines. 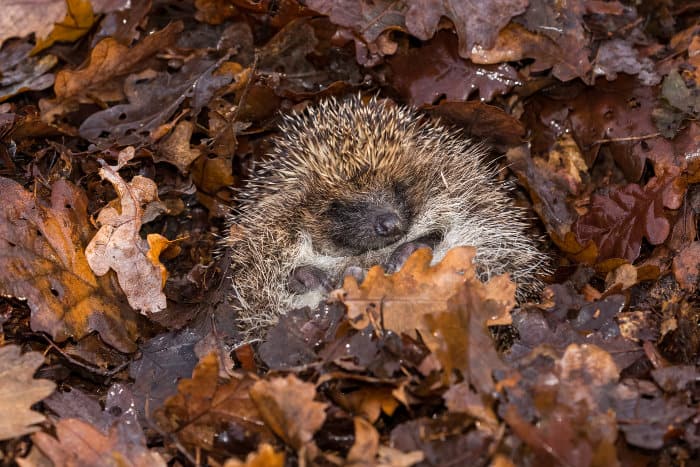 A spiky appearance is the primary driver of confusion when it comes to hedgehogs and porcupines.

They’re both covered in thousands of spikes called quills, which makes them look rather similar.

These quills act as a defense mechanism for both animals. Most hedgehogs respond to physical threats by curling into a little ball.

This exposes the quills which cover their backs while keeping their un-quilled bellies, feet, and faces tucked away, nice and safe.

On the other hand, porcupines don’t roll into balls. Instead, they raise their quills, which are generally much longer, and chatter their teeth.

This creates a warning noise, meant to deter predators. They then wave their tails around in an attempt to hit the predator with their sharp quills.

By raising their quills, porcupines can also show a white stripe down their backs, replicating a skunk’s appearance and creating another potential deterrent.

Hedgehog quills, also called spines, are much shorter than the average porcupine quill at around 2.5 cm long.

Porcupine quills vary significantly in length between the various species, but they can grow up to 30 cm long on the crested porcupine in Africa.

However, the quills are barbed and easily detachable, which can make for some seriously nasty injuries. With this in mind, perhaps it’s better to assume that they can shoot them and keep a wide berth!

So, how did these two barely-related animals end up with such similar defense mechanisms and appearance? The answer is convergent evolution.

This is a phenomenon where unrelated animals evolve similar traits due to them facing similar evolutionary pressures. It turns out that quills are an excellent defense, so both animals ended up evolving them entirely separately.

While porcupines lose and regrow their quills easily and frequently, hedgehogs typically don’t lose many of their spines. This is with the exception of ‘quilling’ which is a phase that all young hedgehogs must endure.

Hoglets (baby hedgehogs) are born with swollen skin that covers their baby quills to protect their mothers. Gradually, these quills emerge and promptly begin to fall out.

These baby spines are then replaced with their adult spines, in a process that can be painful and leave them in a bad mood.

Soon enough, though, the hedgehog has a full set of adult quills, and the ordeal is over. However, some hedgehogs go through additional, less severe stages of quilling over the following years.

Baby porcupines, also known as porcupettes, don’t have to contend with quilling. They will happily lose and regrow quills throughout their lives. 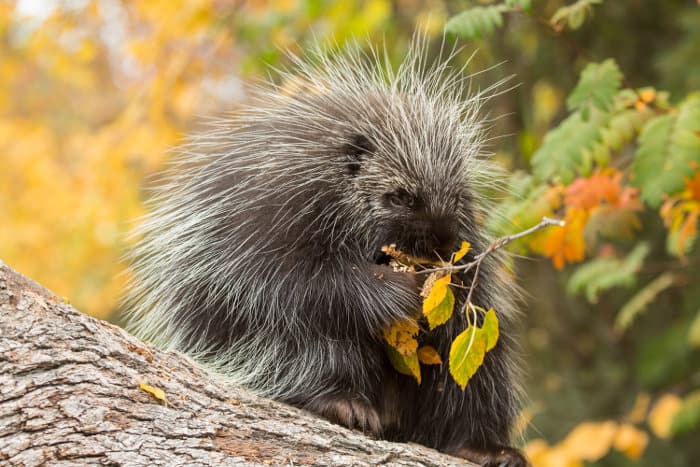 Despite their size and impressive weaponry, porcupines are mostly herbivorous. North American porcupines eat twigs, leaves, and green plants such as clover.

They also occasionally eat bark and will regularly climb trees in search of sustenance.

African porcupines aren’t adept climbers like their American cousins, so they opt for ground-based food sources.

They’re not entirely herbivorous, though, and will sometimes snack on carrion (animal carcasses).

Surprisingly, dainty hedgehogs are the meat-eaters out of the pair. They are primarily insectivores, eating things like beetles, caterpillars, worms, slugs, and other invertebrates.

Yet their diet doesn’t stop there. They will also eat small critters like baby rodents, frogs, and little birds, as well as fallen fruit and eggs.

You’ll find Old World porcupines in most of Africa, throughout Southern Europe, and in some parts of Asia.

Hedgehogs are endemic to Africa, Europe, and Asia, and don’t live natively in the Americas. You’ll also find them in New Zealand, but they only reside there through introduction.

The various species of hedgehogs live in a wide range of habitats, from forests and meadows to savannas, woodlands, and deserts.

Some hedgehogs, the European variety in particular, also enjoy living in urban areas, such as parks, gardens, and farmlands.

Porcupines are even more “all-terrain” than hedgehogs. They’ll live just about anywhere, from dusty deserts to tropical rainforests. New World porcupines spend a lot of their time in trees, while their Old World cousins are ground-bound.

Hedgehog vs porcupine vs echidna 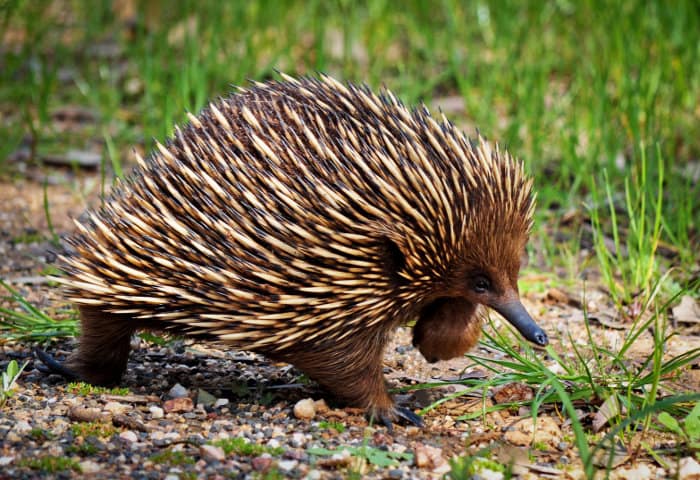 It turns out that porcupines and hedgehogs aren’t the only spiky lookalikes in town. Echidnas are bizarre creatures that look deceptively similar to the mammals in question.

Yet, once again, they are related only in appearance. Echidnas belong to an entirely different order – the Monotremata order – and are even stranger than porcupines and hedgehogs.

For starters, they’re one of only two egg-laying mammals – the platypus being the other.

They also resemble South American anteaters, which, along with their taste for ants and termites, earned them the nickname ‘spiny anteaters’.

They have relatively long, almost beak-like snouts and coarse hair in between their spines.

Usually weighing between 2 and 5 kg, echidnas are mid-sized, smaller than most porcupines but larger than most hedgehogs.

Moreover, they have a particularly volatile body temperature, which often sits at 32°C and is lower than that of any other mammal.

This contributes to their unusually long lifespan for such small animals. They can live for up to 50 years in captivity!

Get Acquainted with the Hedgehog and Porcupine

Hedgehogs and porcupines have a lot more to them than one might think. They’re some of the weirdest and most wonderful creatures on our planet, and they deserve our knowledge of their curious ways.

If you’d like to see Africa’s hedgehogs and porcupines for yourself, consider booking a safari package. Just be sure to keep your ears open for chattering teeth, and stay wide of the porcupines! 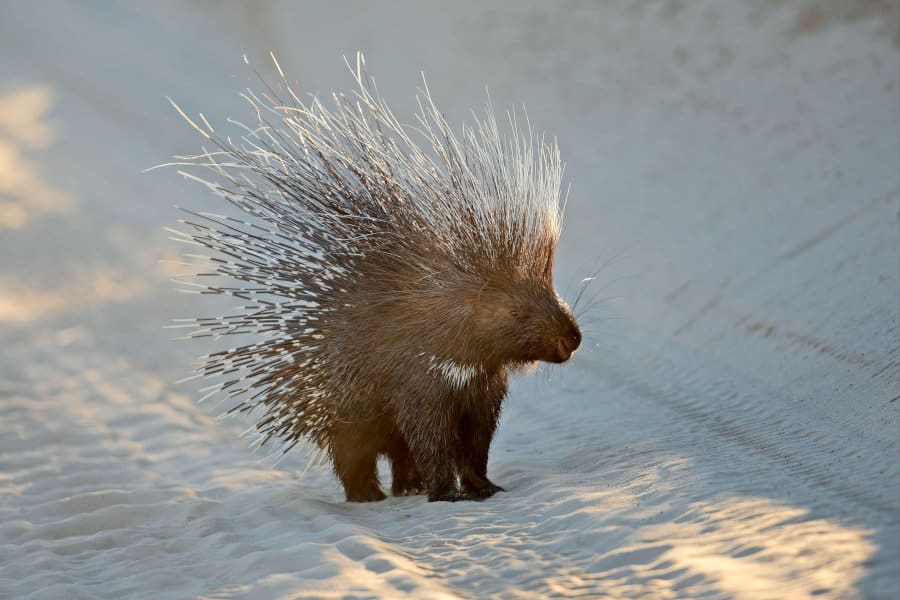 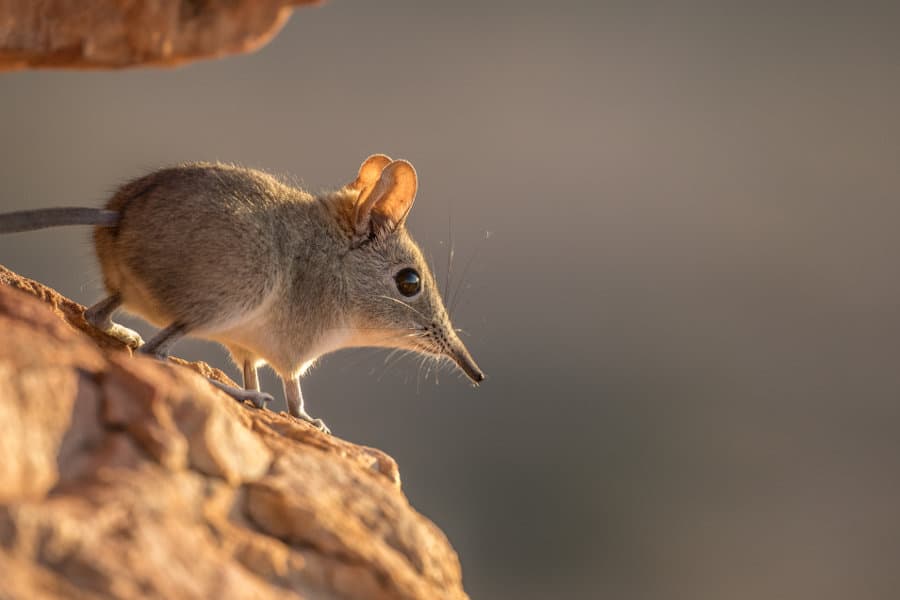 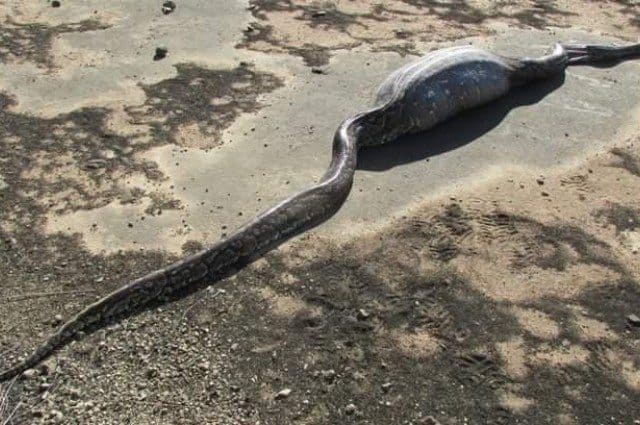