Get ready for a cuteness overload! When traveling in southern Africa, you may be lucky enough to spot a small, rodent-like animal scurrying in the brush. Chances are, it’s not a mouse, but an elephant shrew.

The first amusing fact to know about them is that they are not actually shrews. Obviously, they’re not elephants, either. They are, however, related to the majestic elephant, the charming hyrax, and the quirky aardvark.

They get their name from their elongated nose, which looks a bit like an elephant trunk, if you look closely enough. You might even jokingly call it an elephant mouse. And there’s a lot more to these little cuties than meets the eye.

The Sengi Animal and Its Scientific Classification 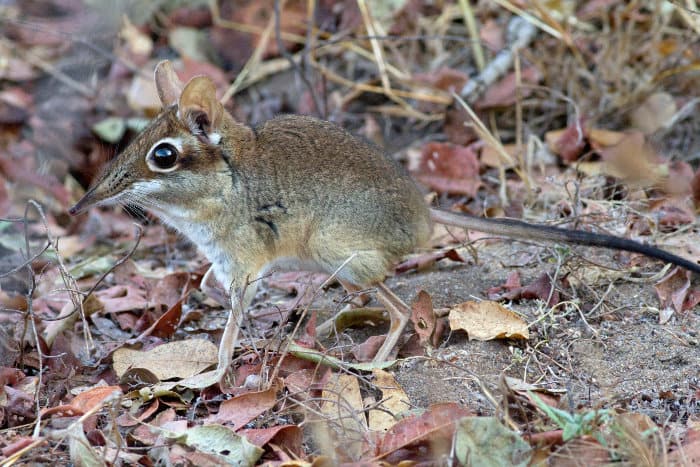 It’s worth knowing that local people and wildlife guides may not always refer to these awesome mammals as “elephant shrew”. “Sengi” is another name for these shy creatures, and you can safely use it interchangeably.

People also call them “jumping shrews”, due to their ability to leap relatively impressive heights.

There are 19 species of sengi on the African continent. They are mammals, living between 1 and 2 years — quite a short lifespan. Amazingly, experts are still discovering new species and rediscovering species once thought lost (more about that later).

There are 20 recognized species of elephant shrew, divided into 6 categories of genus:

The short-eared elephant shrew is the smallest of the 20 elephant shrew species. It weighs up to 40 grams (1.5 ounces) and is about 10 cm (4 inches) long.

The signature long snout has its nostrils at the end, much like an elephant. Many species have grey fur, with a white underbelly. However, larger elephant shrews can be quite colorful. Some carry a vivid red or ginger color on their heads over an almost black body.

Sengis also have a long tail, which is rather scaly. However, their other most impressive feature is noticeably bigger rear legs. This is the key to their speed and ability to jump great heights and distances for their size. It also accounts for their reputation as ‘rockhoppers’.

They hunch over, like a common mouse, almost always seemingly coiled for a quick getaway. Like some mice, they also have large ears, alert for sounds of danger or prey.

The African Sengi Habitat: Where Do Elephant Shrews Live? 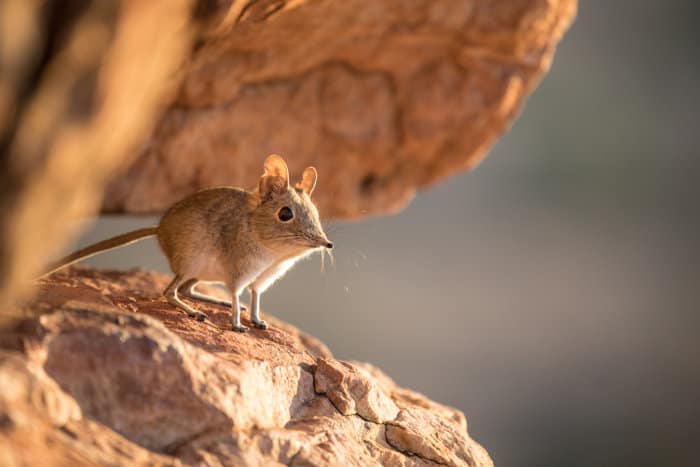 The elephant shrew is rarely seen yet is actually found across the whole African continent. Only the Sahara Desert and parts of West Africa have no reported sightings of sengi.

Their adaptability makes them equally at home in dense forests, deserts, and anything in between. They have been remarkably successful in the Namib Desert, for example, one of the driest in the world. At the same time, they proliferate in the rainforests of East Africa.

Sengis are shy, so are rarely encountered on a casual nature stroll. They are burrowing creatures, that prefer soft ground and shrubby terrain. Sengis make interconnecting tunnels and paths. By creating this clever network, they can escape predators and trap prey.

The cute elephant-nosed shrew’s main diet is invertebrates and insects like termites, ants, worms, and spiders. They also eat seeds, fruit, and leaves when necessary. For the most part, they don’t have too much trouble catching their food.

Elephant shrews can use their long snouts in similar ways to anteaters. They use it to move soil and dirt to get closer to their prey. Their long tongues are especially useful for reaching those ants and termites as well.

They also have exceptional smell and sight. And their large ears can hear predators and prey from a significant distance. 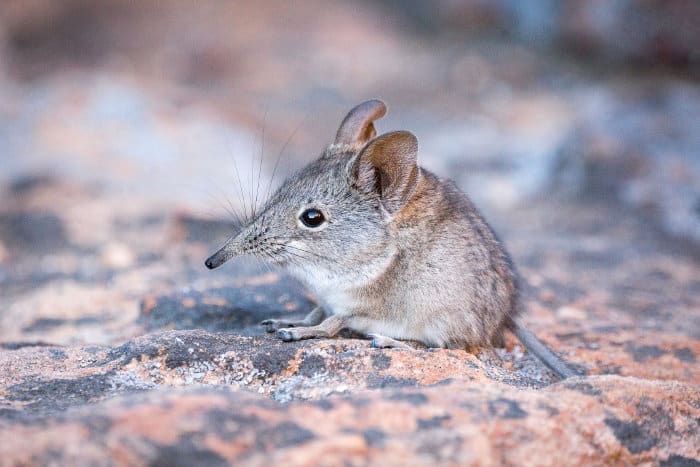 A sengi’s size makes them an ideal meal for medium-sized predators. Carnivorous snakes and birds of prey pose a particular threat to the sengi. Fortunately, elephant shrews are very quick and elusive. It’s only the quickest and slickest predators that successfully catch one.

Think about this: an elephant shrew can move at 30 km per hour (18 mph) at full speed. That is very quick for such a small animal. It can also jump up to 1 m (3 feet) in distance. It’s only a few inches tall, so that’s like leaping a tall building for a human.

Their coloring also makes them fairly well camouflaged, which is always a plus! Given that the elephant shrew can breed from as early as six weeks old, predators don’t really pose too much of a threat to the species population.

So, the main threat for the sengi, as with so many animals, is due to loss of habitat. As more of the continent suffers deforestation, the elephant shrew population dwindles.

The sengi is an endangered animal. The two larger species – the grey-faced sengi, and the golden-rumped elephant shrew – are particularly under threat.

Elephant shrews go through mating stages for several days at a time and typically gestate for around 6-8 weeks. The recovery period is fast, and a female can have several litters per year.

Only 2 or 3 young will be born, and they will mature quickly. In fact, they are able to move about within a few hours. After 2 weeks they move out of the nest and out on their own. And within six weeks, the young will themselves be able to breed.

Interesting side fact: there is a slight variation in mating patterns based on region. As far as scientists can determine, sengi populations at higher altitudes seem to have a mating season. By contrast, mating at sea level seems to happen year-round. 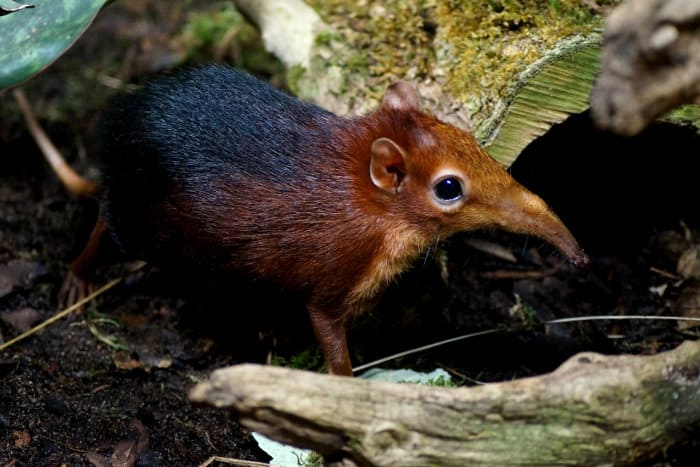 Fortunately, as we’ve mentioned, elephant shrews aren’t shrews at all. So, unlike true shrews, they are not venomous – though people confuse them for shrews in that sense.

You’re thinking: are shrews really venomous? Here’s a bit of crazy trivia. Yes, true shrews are venomous. There is no need to worry, though — their venom isn’t life-threatening to humans. Still, a bite can be nasty and unpleasant, and you don’t want to experience that firsthand.

Despite not being venomous, elephant shrews are not really recommended as pets. They are wild animals and do not necessarily act timid and playful as pet mice would.

They will avoid any contact when they can, and wouldn’t enjoy a captive life, especially without a mate.

Most importantly, trading in elephant shrew is illegal in many African countries. They are considered endangered, and dealing in them is considered wildlife trafficking, carrying stiff penalties.

Can We Save the Elephant Shrew? 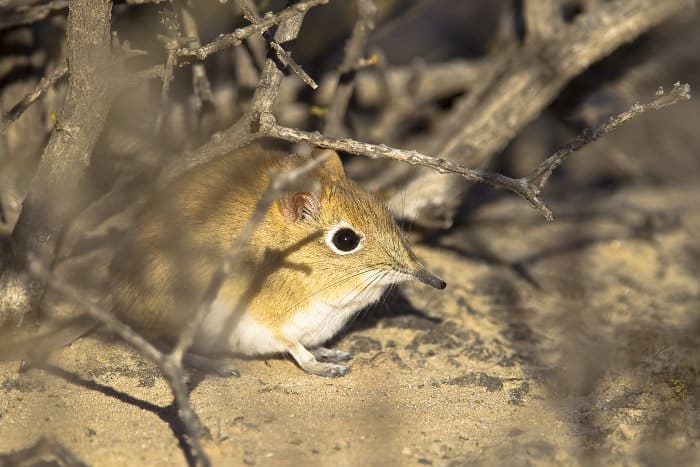 In some parts of Africa, the trapping and eating of elephant shrews continue. And habitat loss is an ever-present threat to African shrew and other species on the continent.

Thankfully, science offers some good news from time to time. The grey-faced sengi was only discovered in 2008. The Etendeka round-eared sengi had its own glorious moment in 2014.

In 2020, scientists discovered a species of elephant shrew in Djibouti. This species had not been seen since 1968. News like this gives us hope that with some help from conservation projects, we can see populations on the rise again.

This shy little creature is a remarkable and unique addition to our world. It is the mouse that isn’t a mouse, and an elephant that isn’t an elephant. It can live in a number of environments and can hold its own in a race!

Who knows, perhaps you’ll be able to spot an elusive elephant shrew on your next African safari. 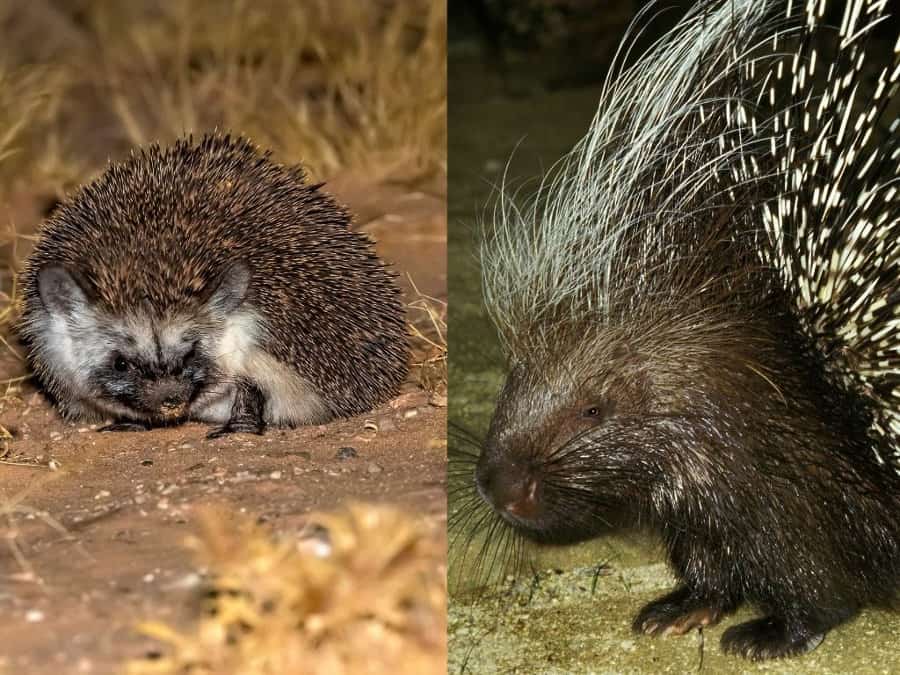