What is the difference between an aardvark and an anteater? They look somewhat similar, and at first glance, they may even be mistaken for one another.

However, though aardvarks and anteaters are among the weirdest animals you might encounter, they are remarkably different. They live on distinct continents, adopt several divergent habits, and grow different kinds of teeth. (More about that later).

Still, it’s interesting to compare these two creatures across various categories. Let’s take a look at these fascinating animals and how they compare. We’ll try to determine what the real similarities and differences are, and what exactly makes each one tick.

Is an Aardvark the Same as an Anteater? 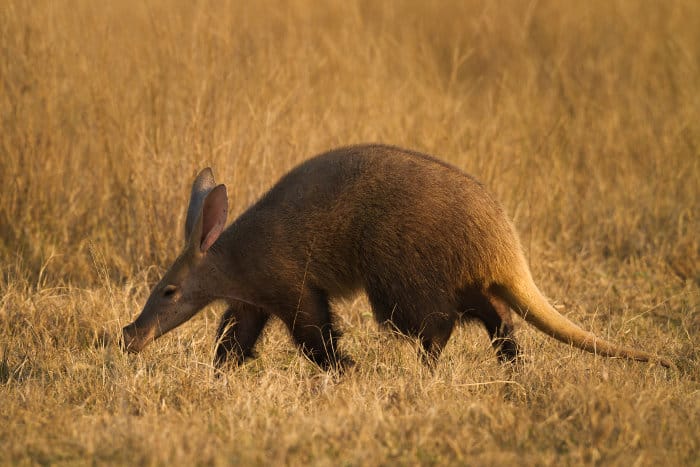 In a word, no. But here’s a longer answer that explains why:

Anteaters and aardvarks live on different continents. So the aardvark is actually an entirely different species to the anteater. Yes, it sounds unlikely. Yet science confirms it and classifies it as such.

The aardvark belongs to the Tubulidentata order. There is only one species of aardvark, which is indigenous to Africa.

Are aardvarks and anteaters the same thing? It’s about convergent evolution

Here comes the weird science: These two unrelated and unusual animals represent an amazing scientific phenomenon. The principle of “convergent evolution” suggests that the two species developed similar traits because they fit into specific ecological roles.

In this case, the most obvious trait is that they feed on the same things. They’ve always lived continents apart, and yet they evolved along similar lines because of the specialization related to their diet.

There are other animals that look like anteaters and aardvarks, based on this same principle. Think about endangered pangolins and armadillos. Long faces, strong claws, great diggers, and insect and ant feeders. Yet they are all completely different animals. Fascinating!

Anteater vs Aardvark: The Similarities

Let’s take a step back and see exactly why people often mistake anteaters and aardvarks as related. Here’s a quick list of what characteristics they share.

In other words: What do an aardvark and anteater have in common? 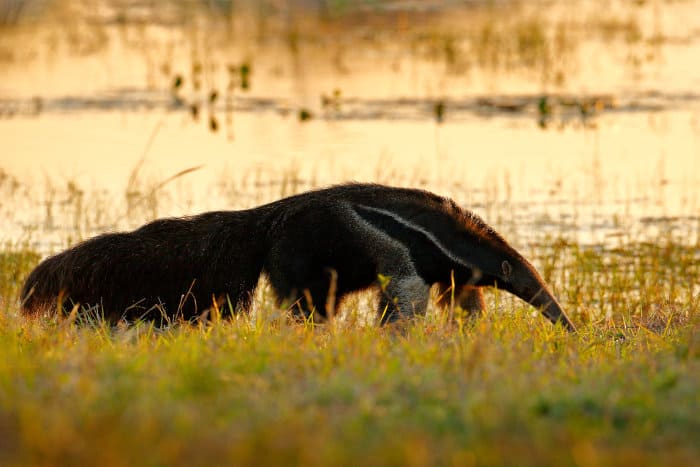 The scientific term Myrmecophagy is a big word that means feeding mostly on ants and termites. Both the aardvark and anteater have specialized feeding behavior in this regard. They’ve also adapted the ability to dig for their food efficiently and resist its defense mechanisms.

Both animals are mammals. They also only give birth to one offspring at a time. Even their gestation periods are similar. An anteater gestates for six months, while an aardvark carries for seven.

They can live to roughly the same age 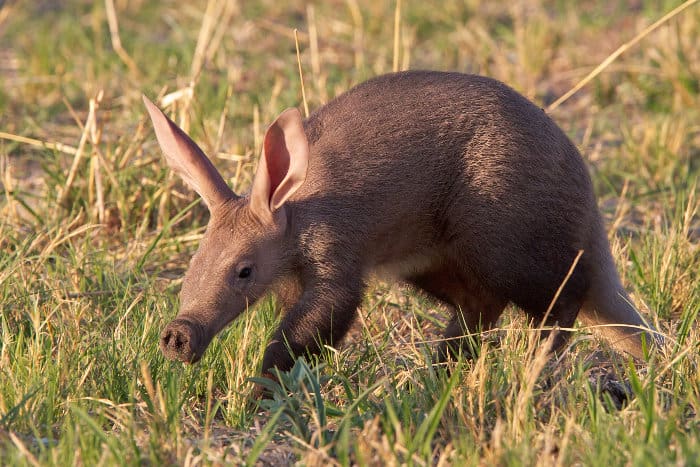 In captivity, both species can live up to 25 years of age. In the wild, it’s slightly different. An anteater on average has a shorter lifespan, usually around 15 years. Aardvark longevity ranges broadly – anywhere up to 23 years.

Neither animal has great vision. Yet they are incredibly gifted with their sense of smell. It’s their primary tool for finding food, which is usually found underground.

They are expert diggers 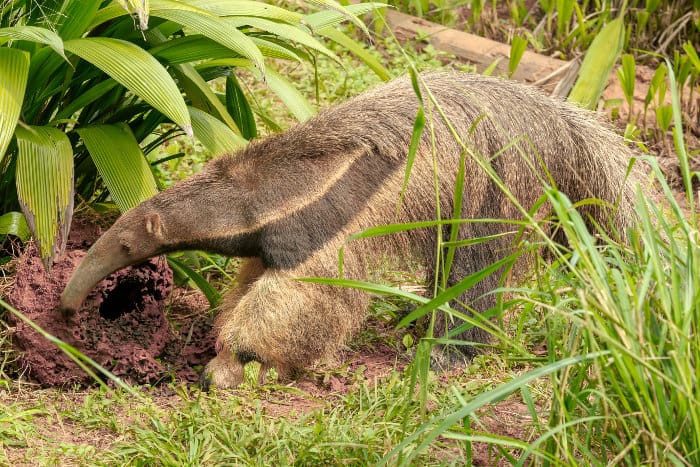 Both animals have strong claws that they use to dig and rip up hard ground. Ants and termites generally live in mounds and anthills. So anteaters and aardvarks often have to “break into” these colonies to get to their food.

So, What is an Anteater?

Let’s get into some details. The anteater is a South American native, mostly grey, with an elongated head and a bushy tail. They often have a black stripe along their bodies.

In the past, people sometimes would mistake the giant anteaters for bears, because of their large claws and fur. A giant anteater can actually grow to more than 2 meters long and weigh 40 kg.

The most well-known feature of the anteater is its tongue. It can extend outwards nearly 60 cm from its mouth. This is useful for reaching those awkward spaces to scoop up ants and termites.

Their tongues are also lightning quick, able to dart in and out at 150 times a minute. As they scoop up the ants, they grind them up with hard papillae (best described as small teeth) in their mouths. 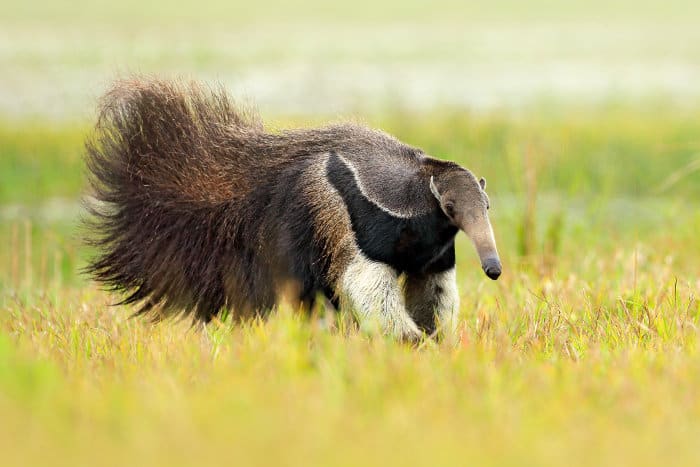 Anteaters are native to South America and Central America, living close to water. They tend to gather along rivers and in swampy areas that happen to be rich with ants and insects. Unlike aardvarks, anteaters don’t spend much time below ground.

We already know they eat ants and termites. Here’s an extra fact: A healthy anteater’s appetite is ravenous, consuming up to 35 000 of the tiny bugs per day. 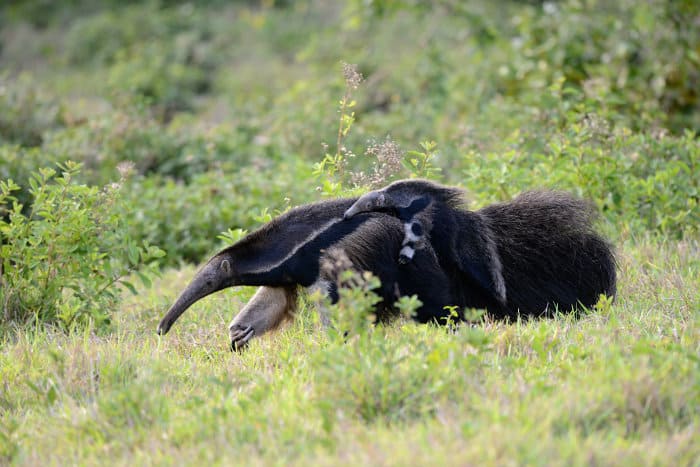 Pumas and jaguars are the main hunters of anteaters in the wild. Sadly, giant anteaters are also killed by humans for food and recreation. They are therefore under threat and protected in many countries.

Anteaters are sizable and aren’t defenseless. Their strong claws can be lethal to any predator. They can grab and rip at their assailant, causing massive injury.

Interesting baby anteater fact: When an anteater is born after six months in the womb, it climbs onto its mother’s back. It stays here for almost a year.

The anteater is a symbol of war for the ancient Aztecs and Mayans. The perceived bear-like characteristics may have something to do with that. Elsewhere, they’re known to be omens of good hunting. 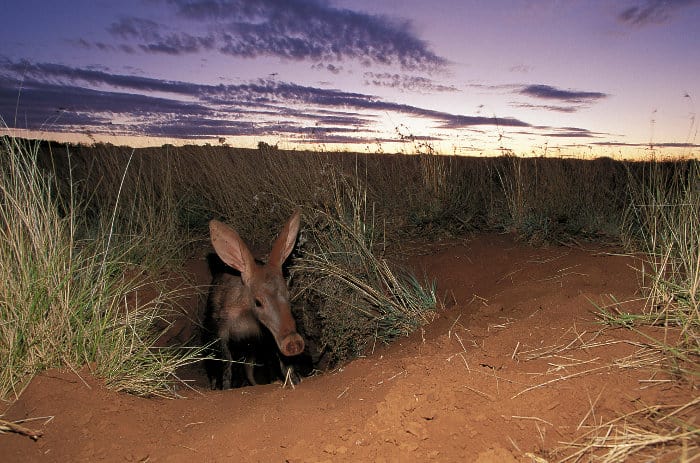 An aardvark lives in Africa (mostly in Southern Africa) and bears a vague resemblance to a small anteater. Some also say it looks like a malformed pig.

In terms of an anteater size comparison, the aardvark grows up to 1.5 m long (shorter than a giant anteater) yet is generally heavier than an anteater of equal size – around 65 kg at most.

Hard hairs protrude from its body, and it has comically large ears. The snout is probably what makes people think of a pig. It is long, with a disc-like end that bears the nostrils.

Like an anteater, the snout and mouth are long, which aids in feeding on those ants and termites. One difference from an anteater is that aardvarks have specialized teeth that continue growing throughout their whole life.

This is necessary because lots of dirt and sand grind teeth down over time. At least the aardvark doesn’t have to worry about not being able to eat later in life.

Aardvarks are native to the African grasslands and savannas. They populate throughout the continent, though they are more common in the southern regions. 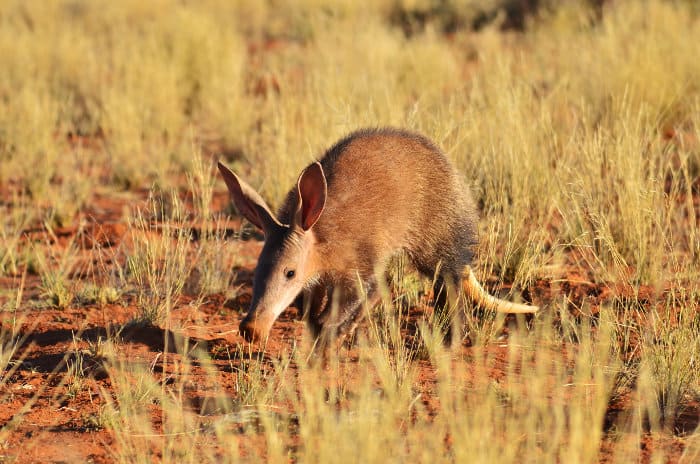 Yes, ants and termites are the main items on the aardvark menu. However, from time to time aardvarks will also eat scarab beetle pupae.

There have been some reports that aardvarks can eat underground-growing fruits. But experts believe this is mainly for its water content.

Interesting baby aardvark fact: Unlike an anteater, an aardvark baby becomes independent very quickly. It is ready to leave its mother after six months.

The aardvark in regional lore 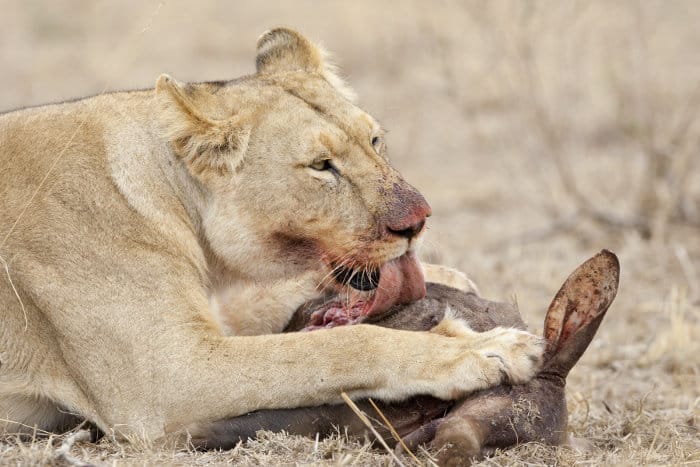 Many African peoples historically revere aardvarks for their tireless attitude and bravery. Aardvarks brave nests of soldier ants, resisting attacks and bites as they eat their fill.

The Key Differences Between the Aardvark and Anteater

Now that we have a rundown of what exactly anteaters and aardvarks are, let’s look at some specific differences between the two. 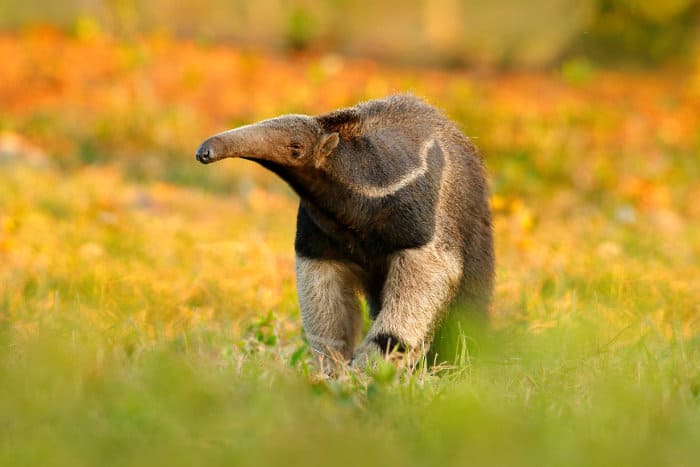 We’ve mentioned that aardvarks have teeth that grow throughout life. However they also use their stomachs to “chew” their food. Aardvark stomachs are extremely muscular and further grind food once it is swallowed.

Anteaters technically have no teeth. The little papillae on the top of their mouths need the extra dirt and pebbles from the ground to grind up the ants and termites they feed on. They would not be able to chew, otherwise.

Aardvarks are active at night. They prefer to sleep underground during the hot African daytime.

Anteaters are diurnal – meaning, they move about during the day.

Anteater and Aardvark: A Final Comparison 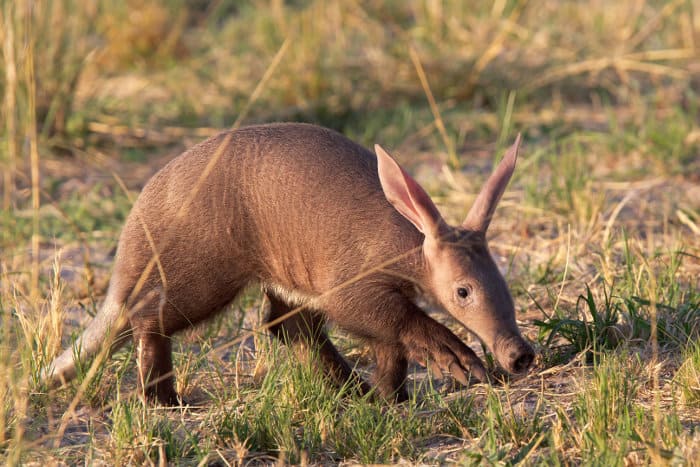 Anteaters and aardvarks eat the same things and share many traits. It seems logical to consider them cousins, or at least in some way genetically related. And if they are not, the natural question for humans to ask is: Which is ultimately the superior beast? So what do you think? Aardvark or anteater?

To borrow a phrase: It’s not a competition. As these two wonderful creatures perform their roles half a world away from each other, we definitely see a world where both can thrive.

Either way, a trip to South America wouldn’t seem complete without a giant anteater sighting. Nor would you really get a sense of the wonderful quirky aardvark without seeing one on your next African safari. 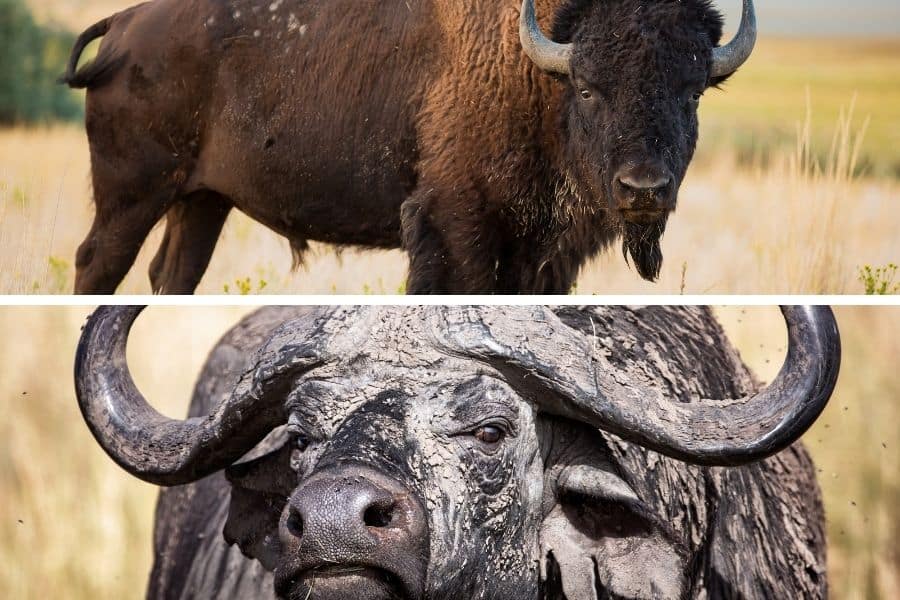 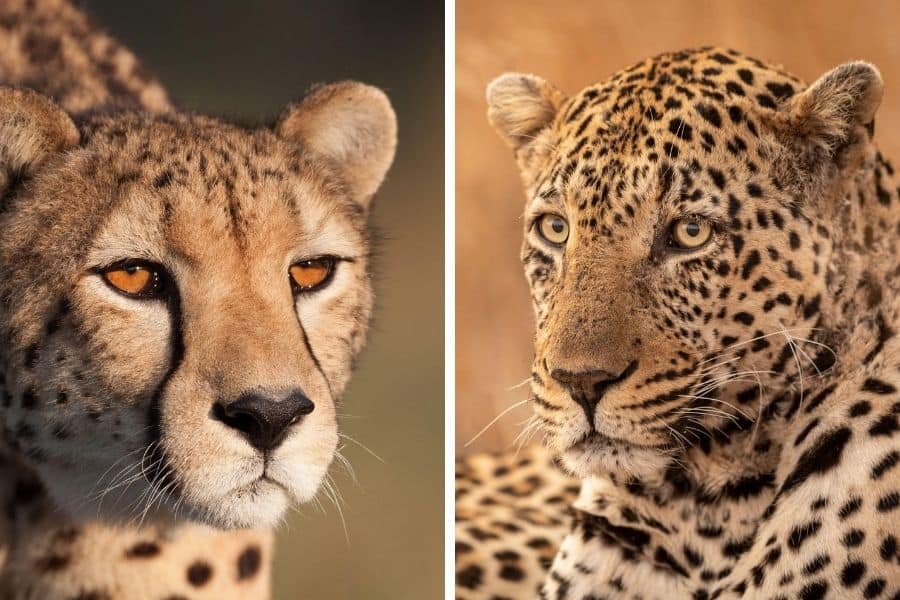