The honey badger vs wolverine match-up is one that intrigues people. Whether it’s wondering who’d win in a fight, or simply comparing the two species, people can’t get enough of the mean mustelids.

Of course, the two would never come into contact – they have very different habitats. But it’s fun to explore the similarities, and differences, of the two charismatic critters. It also doesn’t hurt to pit them against one another in a wolverine vs honey badger fight. Hypothetical, of course!

One thing’s for sure: fur would fly if the ferocious foes threw down. Read on to find out more about these feisty specimens and see which – if any – will emerge victorious.

Honey Badger vs Wolverine – Who Would Win? 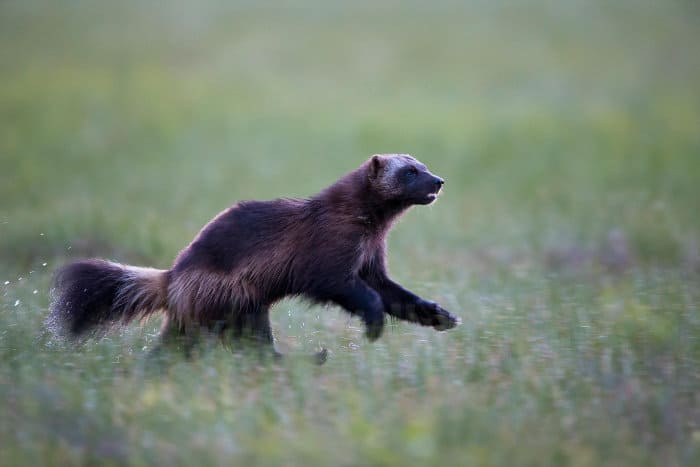 The golden question. To even attempt it requires more info about the ‘fighters.’

On the surface, a wolverine vs honey badger bout looks very evenly matched. Both are members of Mustelidae (the weasel family). Mustelids are known for their ferocity and ability to ‘punch above their weight’. This is handy since they coexist with other, much larger carnivores.

Both are also voracious predators, eating a wide range of prey. They’re known for their powerful build, strong jaws, thick hide, and loose skin. They can defend themselves aggressively and are extremely hard to kill. Coupled with a persistent attitude, they’re two animals you don’t want to mess with.

But, on this occasion, they’re messing with each other! So, let’s take a closer look at the competitors.

Honey badgers, or ratels, have gained quite a reputation, especially thanks to videos of them chasing off lions and sleeping off venomous snake bites. Here are a few quickfire honey badger facts. (You can find a more in-depth look at the ratel here.) 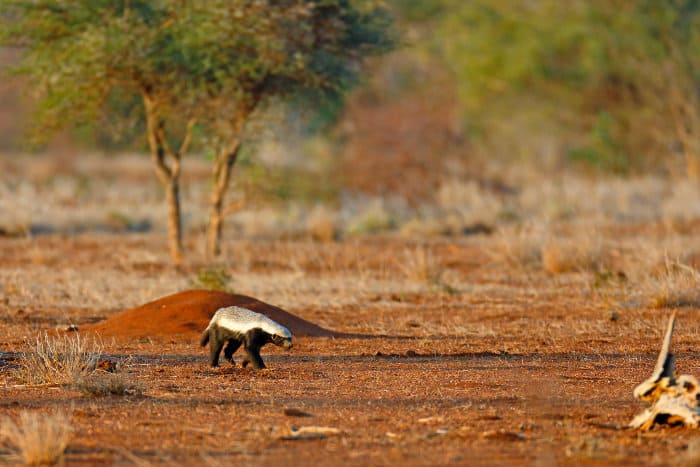 Honey badgers are widely distributed in Africa, as well as parts of Southwest Asia and the Indian subcontinent. In Africa, they range all the way from Morocco to South Africa and are only absent in a few North African countries.

Ratels are, in a word, ravenous! As the name suggests, they do like honey, although that’s just one of many things on the menu.

Honey badgers have a generalised diet and will eat anything they get their paws on. They dig small mammals out of their burrows, break tortoises out of their shells, and even hunt the deadly black mamba.

Despite its name, the honey badger isn’t actually a badger. It looks more like a large weasel than the ‘true’ badgers. Ratels are the only species in their genus, Mellivora, and the subfamily Mellivorinae. It’s probably a good job; they don’t like sharing! 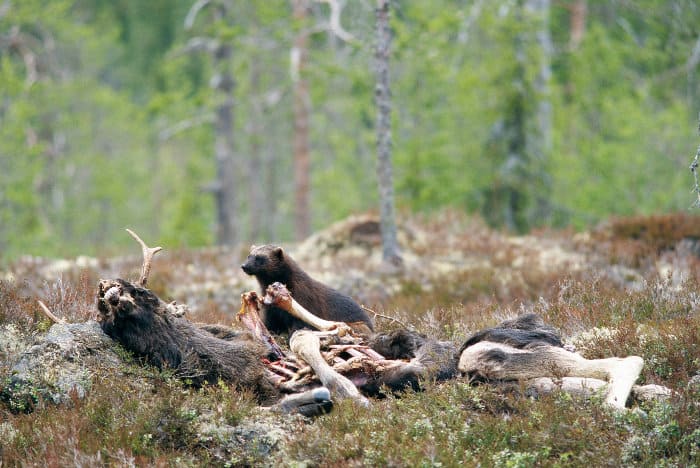 Wolverines are much more northerly than honey badgers. They live in isolated arctic and alpine regions of North America, Europe, and Asia.

Despite their fearsome reputation, wolverines are mainly scavengers. They follow other predators’ trails, hoping to find leftovers, or search out carrion themselves.

Sometimes, they’ll take even larger prey like adult deer, caribou, elk, and reportedly even moose, which weigh many times more than them. This would be rare, though, and it’s likely only young/old, weak, or trapped animals would be at risk. 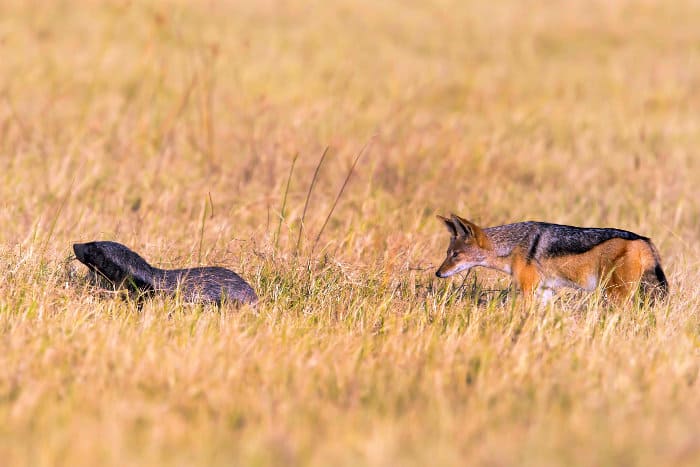 As we’ve seen, the two creatures have a lot in common. Yet there are plenty of differences between these powerful predators.

Although there is some size overlap, the wolverine is, on average, larger than the honey badger. Female honey badgers are only 5-10 kg while males are 9-16 kg. Female wolverines are 7-19 kg, and males can grow between 11-28 kg. 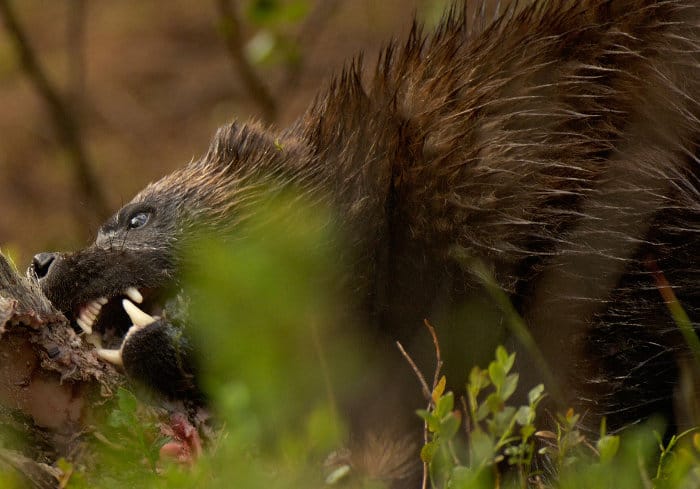 Wolverines have very powerful jaws and strong neck muscles which help them crunch on carrion. Their thick fur helps them survive cold temperatures, while their large paws are adept at moving through snow.

Honey badgers don’t see much (/any) snow on the savanna. Their fur is shorter, but they have exceptionally thick skin that is said to withstand machete blows.

Wolverines have longer teeth, but honey badgers have longer claws, handy for breaking apart beehives or fighting off foes.

While there are some honey badger vs wolverine differences, these animals are also alike in many ways.

Both have very loose skin, allowing them to twist, turn, and slip out of a predator’s grasp.

Not a fight you’d want a front-row seat for, then. 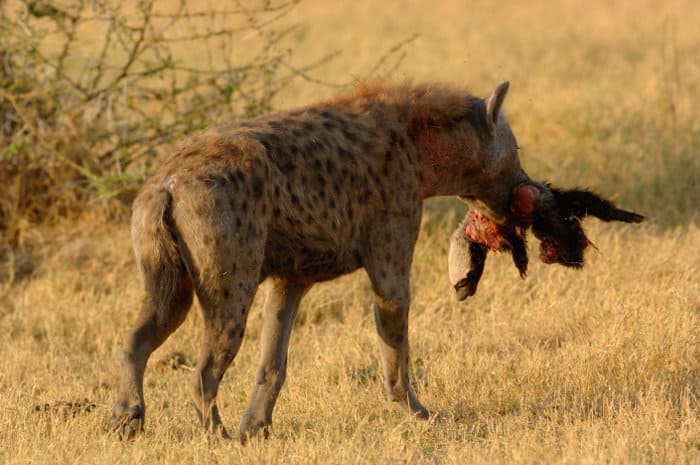 People love to hear about wild animals’ exploits. Like many things on the internet, however, claims about their abilities can be exaggerated.

It’s important to separate fact from fiction with some mustelid myth-busting. Here are some common questions.

It’s easy to see where this myth came from. There’s video evidence of honey badgers chasing off lions, who often leave to find an easier target. But there’s a difference between not being eaten by a lion and killing one!

Lions, like any smart predator, won’t risk injury if they can avoid it. With their sharp claws, powerful jaws, and thick skin, ratels are simply not usually worth the trouble.

Yet lions, and other big cats, have been known to kill honey badgers. They are far larger and more powerful, after all. Even so, it would take time and energy better spent finding a tastier meal.

A honey badger vs lion match-up would not go well for the ratel if the ‘king of the jungle’ decided to fight.

Can wolverines kill bears or wolves? 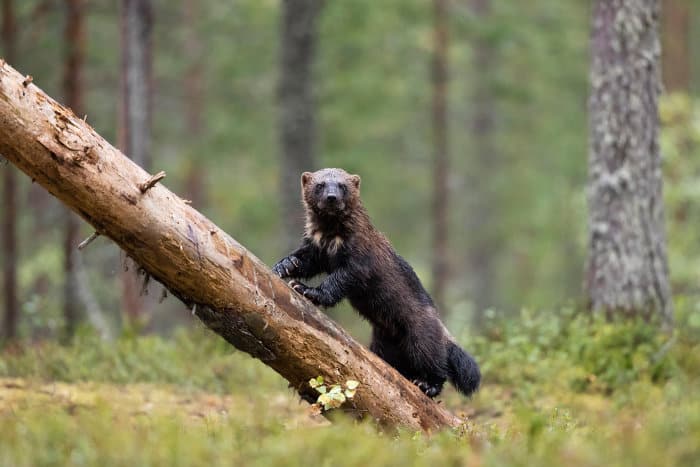 Why would a wolverine be in the same enclosure as a polar bear? Which zoo? Where are the records?

It just doesn’t add up. Much like honey badgers, wolverines can sometimes stand up to large predators. But when it comes down to it, the much bigger, stronger animals have the upper hand.

There is extensive evidence of wolves killing wolverines. This doesn’t always deter the ‘glutton’ from scavenging wolf kills, though. They even prefer areas with wolves around, though they’ll normally make sure the wolves have left a carcass before sneaking in to feed.

What about wolverines vs brown or black bears? Well, one wolverine tried its luck stealing a kill from a black bear, but it didn’t go to plan. (The bear killed the wolverine!) Grizzly bears have also killed and eaten the mustelid, though there are also reports of wolverines defending kills from them.

Overall, it’s a lot like its African relative, the honey badger. Bold, fierce, and aggressive, sometimes to its downfall. Both animals can sometimes bluff their way past bigger carnivores but are usually outmatched if it comes to a fight.

Sounds like the two mustelids were made for each other!

So, we come to the main event. And the question that’s on everyone’s lips: how would a wolverine vs honey badger fight play out?

One thing’s for sure – it wouldn’t be pretty.

It’s impossible to know for certain what would happen, and immoral to find out! But it’s safe to say neither animal would come out unscathed. Many of the fighters’ strengths cancel each other out, and it would probably be a drawn-out affair.

The likeliest scenario is that the two would tussle for a long time, struggling to breach the other’s defences. The ratel has the thicker hide; the wolverine has the more powerful jaws.

Final prediction? The wolverine and honey badger slowly weaken one another. Many small wounds add up, and neither would survive the ordeal.

A bloody, and hard-fought draw.

On the other hand, they might avoid each other if they found themselves in the same habitat. Wild animals are reluctant to risk injury, let alone fight to the death for no reason.

They’d need something to fight for. Throw food in the mix, and all bets would be off! 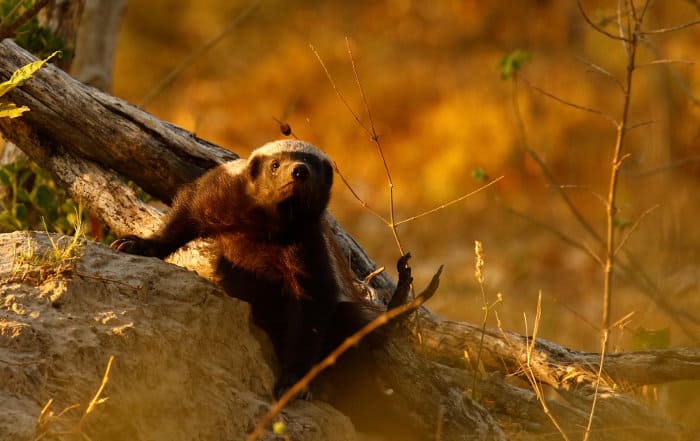 If you’re on safari in Africa, you won’t see this brutal battle, though you might spot the ratel fighting off other foes. Despite the honey badger’s reputation, it’s normally quite elusive and avoids conflict with larger animals when possible.

If you do catch a glimpse of a honey badger, you should feel lucky to see this amazing animal in action. Likewise, if you’re out in the Arctic wilds, encountering a wolverine is a rare privilege. Just don’t get too close to either of these critters, and don’t get between them and their dinner! 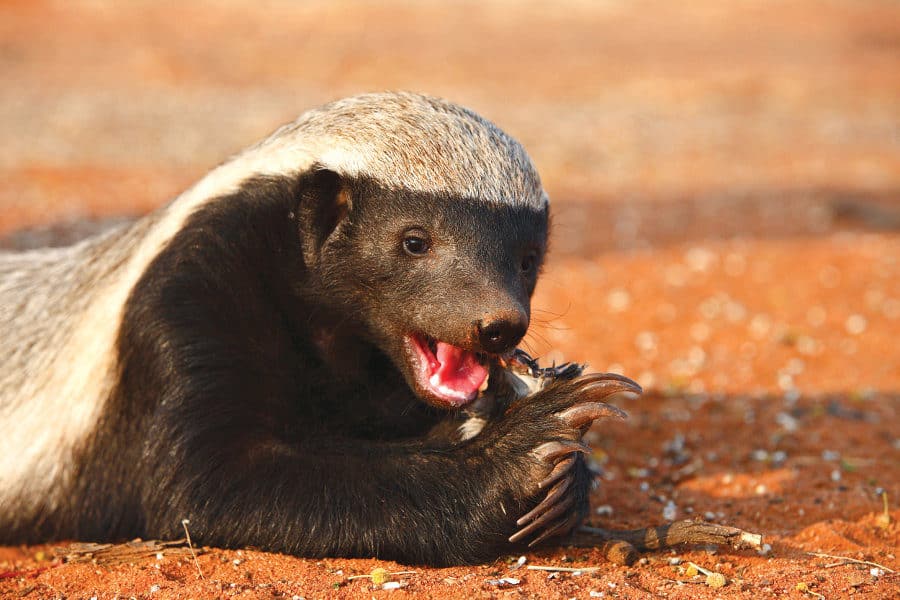 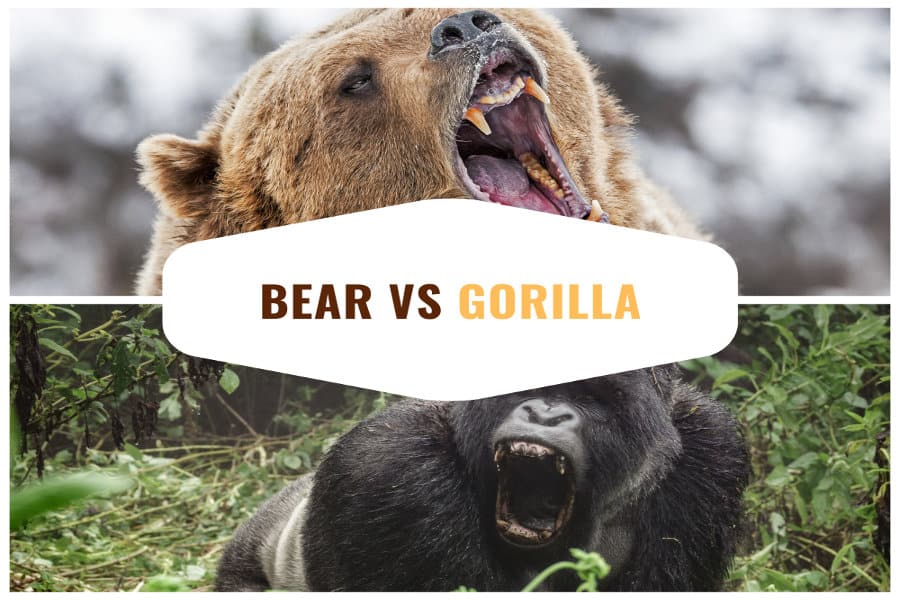