The largest lakes in Africa are wonders of the world, magnificent bodies of water home to wildlife and wild adventure.

Hippos point their snouts above the surface. Lions hunt around the banks. Antelope herds survive in their hundreds of thousands, thanks to these incredible bodies of water.

These lakes define the continent, provide refuge for wildlife, support millions of people, and are full of little mysteries, as this article will explain.

What is the largest lake in Africa?

Lake Victoria – it’s the third largest lake in the world covering a massive 69,484 km² of Africa with water.

What is the largest lake in the world? 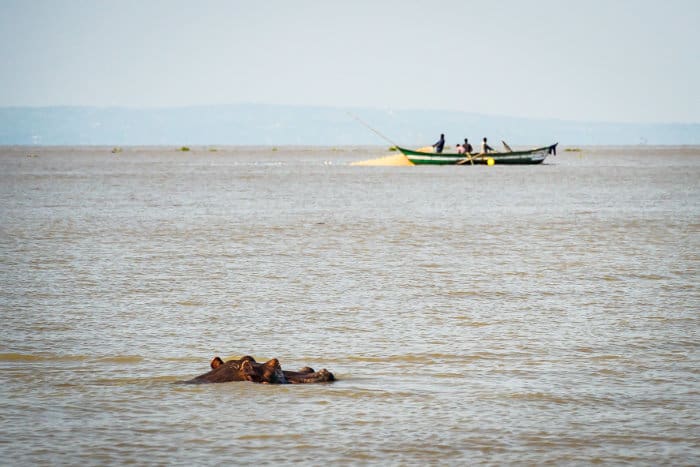 1. The largest of them all – Lake Victoria 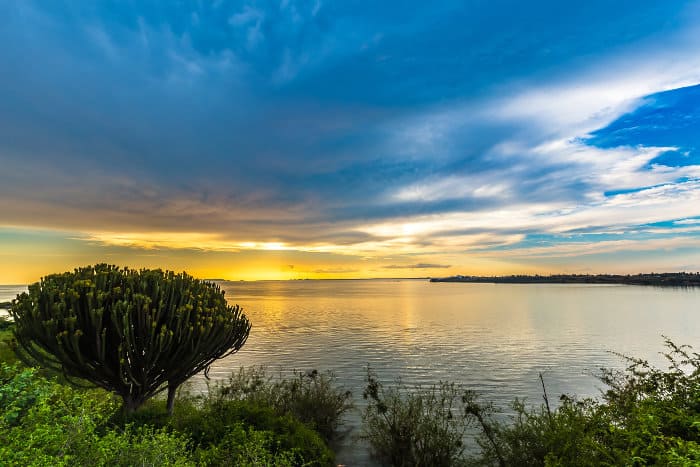 Oh Victoria – how did a British monarch end up being the name of Africa’s most incredible lake? Like so much on the continent, the effects of colonialism continue.

On some parts of Lake Victoria it’s almost like being on the shore of the ocean, where you cannot see anything but water beyond the horizon.

Lake Victoria is not only the largest lake in Africa, but it is also a very important lake to the surrounding region. Portions of the lake are situated in three countries, Uganda, Kenya and Tanzania. As a freshwater lake, Lake Victoria provides drinking water and fishing opportunities to all three of these countries.

Its shoreline exceeds 3000 km and provides many opportunities to play and bathe in the wonderful water. These vary in characteristics. The south western lakeshore has a high precipice of 90 meters, with papyrus swamps that help create a river delta.

The lake’s northern shore is flatter, where the beautiful Ssese archipelago has a series of 62 islands that can be visited at the start or end of a Uganda safari. 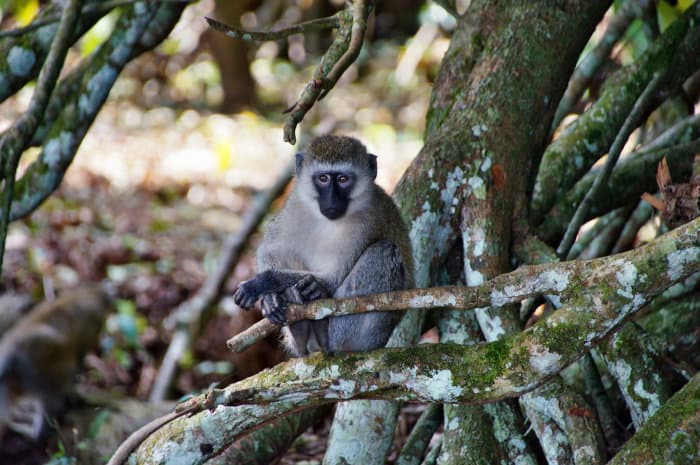 On the southeastern and western coasts you will find the Speke Gulf and Emin Pasha Gulf, back-dropped by beautiful wooden hills to explore.

The only outflow from the northern shore of Lake Victoria is the Nile River, which exits the lake near Jinja, Uganda.

More than 200 species of fish live in Lake Victoria. Tilapia is found in abundance and this provides sustenance for hundreds of thousands of fishermen and their family.

Nile crocodiles lurk in the water and hippos bathe in the shallows. Various antelope species live close to the water, along with their predators.

The lake and its surroundings have been threatened by over-fishing, invasive plant species and pollution. The pollution is predominantly raw sewerage and waste that enters the lake through storm-water drains. This increases the risk of disease and the livelihoods of communities, fish and animals. 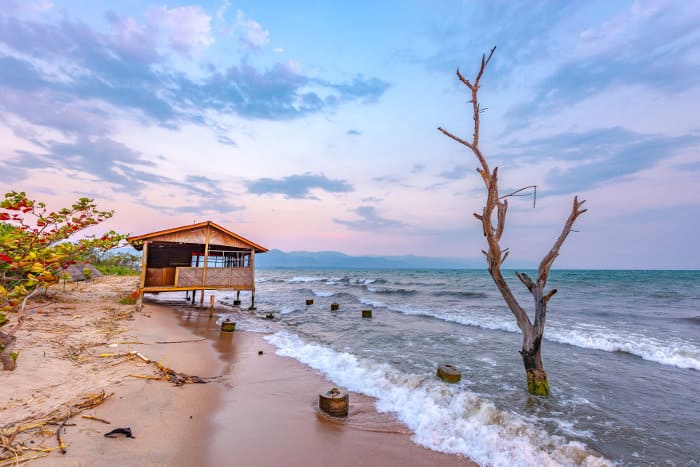 Lake Tanganyika is a freshwater lake that sits between the DRC, Tanzania, Zambia and Burundi. It is the second largest lake in Africa. Three rivers flow into the lake – Kalambo, Malagarasi and Ruzizi – but the Lukuga river is the lake’s only outflow.

Crocodiles and hippos are the big animal inhabitants and they are known to wander into villages at night. Chimpanzees live in forests along the lake’s eastern flank and more than ten monkey species find a home close to the lake’s long shoreline. 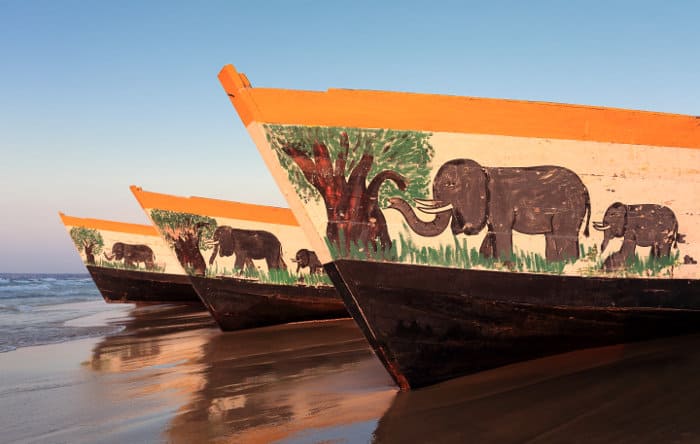 This lake is unsurprisingly situated in Malawi. It’s also located in Mozambique – Malawi just won the battle of the names!

Lake Malawi is not easy to forget. It’s a nature lovers dream with more species of fish than any other lake in the world. Beautiful beaches line the banks and you can stay in small camps located on the lakeshore, such as those in Nkhata Bay or Cape Maclear.

There are plenty of fishing villages to choose from and the blueness of the lake can take your breath away. The best time to visit the lake is in the dry season between April and November.

Like Lake Victoria, Lake Malawi is also a food source and an economical hub for Malawi. It is also a lake with exotic fish like the rare Mbuna fish with its bright and colourful skin.

You will find that the northern part of the lake is pretty untouched whereas the southern part is more heavily populated, with fewer places or pure wilderness. You will find a lot of camps along the lake shore but watch out for mosquitoes, they’re part of the furniture. 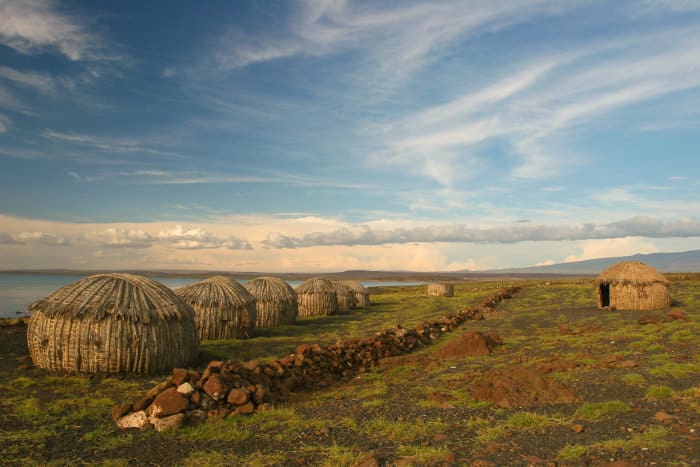 Situated in Kenya, with its northern tip touching Ethiopia, Lake Turkana is the largest permanent desert and salt lake in the world. One of the lake’s inlet rivers is the Omo river and this water source is under threat due to the construction of the Ethiopian Gilgel Gibe III dam.

The surrounding landscape is arid and stark. The water doesn’t flow out, yet the water levels drop due to evaporation from the harsh sun. The water in the lake is drinkable alkaline water but it is rather unpalatable.

A lot of hominid fossils were found in the area surrounding Lake Turkana and there are rich wildlife deposits in the area, suggesting that a great animal kingdom lived here millions of years ago.

Unlike the other largest lakes in Africa, Turkana is inaccessible and does not support many people or animals. Lots of volcanic rocks are scattered around the shores to the east and south, whereas on the western and northern shores you will mostly find dunes.

In this desert and arid environment the lake and its shores are occupied with crocodiles, scorpions and other reptiles. 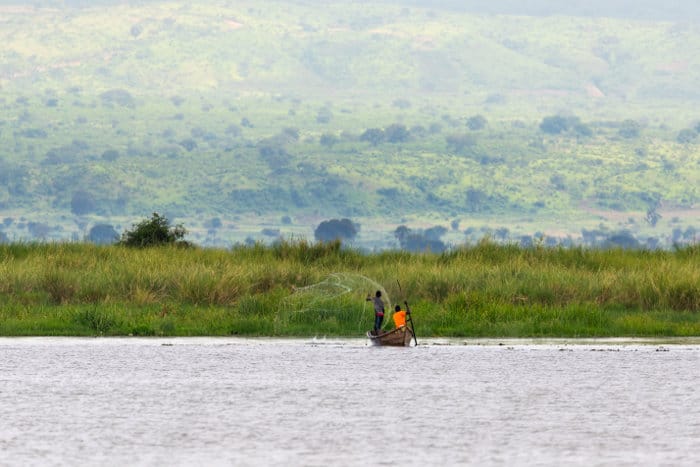 Lake Albert is a saltwater lake located on the border of Uganda and the DRC and marks the center of the African continent.

Just before joining Lake Albert, the Victoria River Nile compresses into a narrow passage then thunders over a precipice, creating Murchison Falls, one of the best Uganda safari destinations.

Lake Albert is named after a British monarch. Albert was Queen Victoria’s husband, so a single British family has two of Africa’s largest lakes named after them!

Before Albert this lake was known as Lake Mobutu Sese Seko, as it was named after an African ruler. Mwitanzige is a more evocative old name and comes from the 14th century, when a great dynasty ruled over the great lakes of Central Africa.

6. Lake Mweru, the colourful and tropical 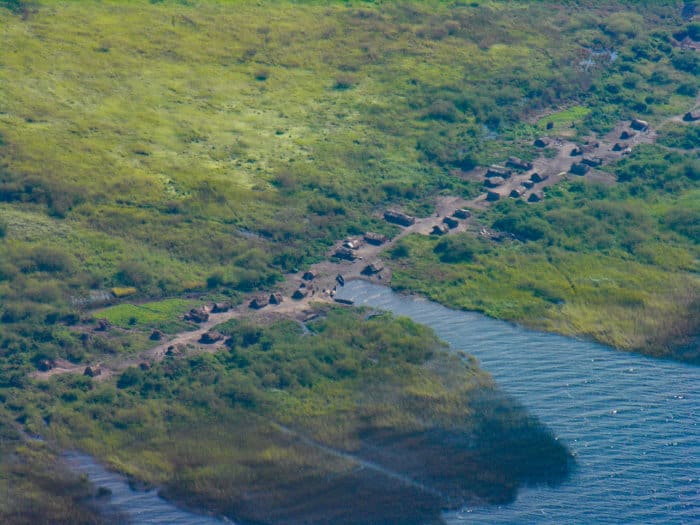 With its tropical feel and vibrant colors, Lake Mweru is one of the most beautiful African lakes. It is a freshwater lake and shared almost 50-50 between Zambia and the DRC.

Satellite images from NASA show the water to be black in colour with the outline of the swamps in a solid blue line.

The lake is located in the high rainfall belt of the Central Africa plateau. Two seasons dominate this region, the dry season between April & November and then the rainy season, from December to March.

Prior to 1997 there were a few villages dotted around the lake and lots of wildlife. But a new asphalt road made the lake accessible and the wildlife has gradually drifted away, so this large African lake is not a number one choice for a safari. Still the lake and its surrounding wetlands do have a strange beauty. 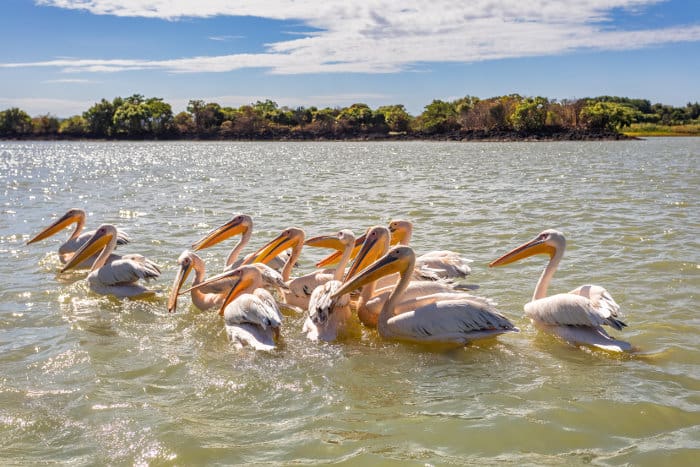 Lake Tana is is situated in the northern part of Ethiopia and is one of the world’s most understated and wonderful lakes. The largest lake (86 km long and 66 km wide) in Ethiopia, it was nominated as a UNESCO Biosphere Reserve in 2015.

Ancient monasteries are dotted around Lake Tana and their cultural and political histories have been preserved in some of them. A mummified emperor can be found in Dega Estefanos monastery very close to Lake Tana! 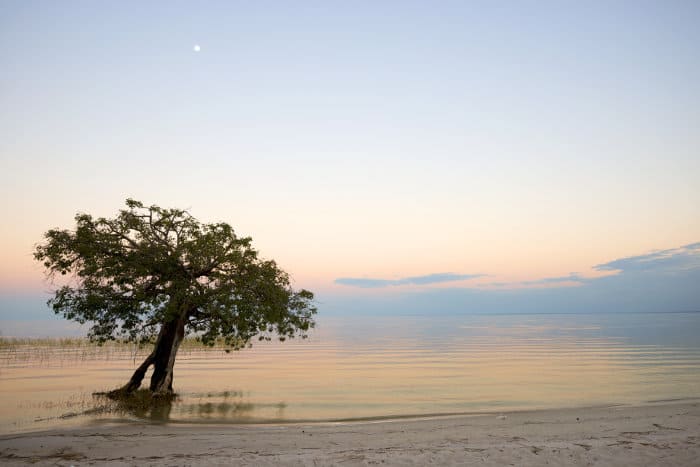 Eighth in the list of largest lakes in Africa is definitely one that will grab your attention. Bangweulu is one of the most precious lakes in Africa, a freshwater lake located in the northern part of Zambia. Bangweulu means ‘where the water meets the sky’ and it’s a very fitting description of the color.

Lake Bangweula has a rich wetland system home to more than 400 different bird species. Cormorants swoop down and pygmy geese gather in the shallows. You can see egrets, waders, various herons and ducks.

There are whispers of large tourist developments coming in the near future, so take the plunge now and see this natural raw beauty in its original splendor!

The largest lakes can define Africa. They are places for wildlife and people to coexist, places that provide some of the continent’s key natural highlights.

The lakes of Africa need you, so what are you waiting for? 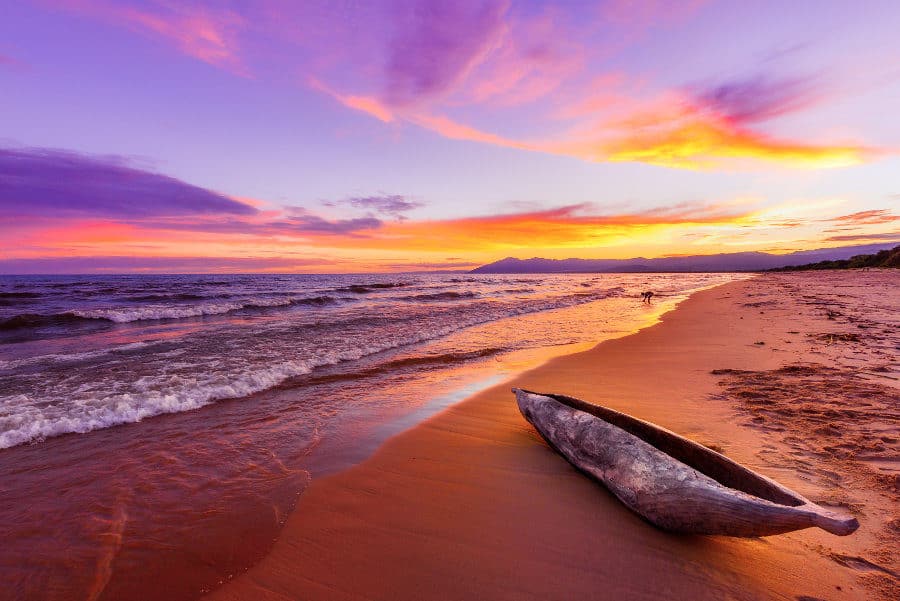 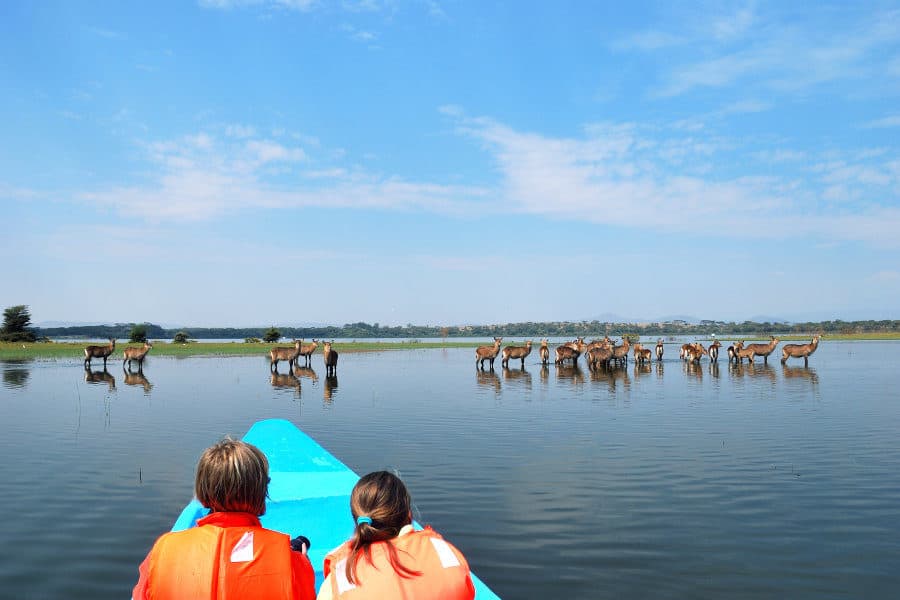 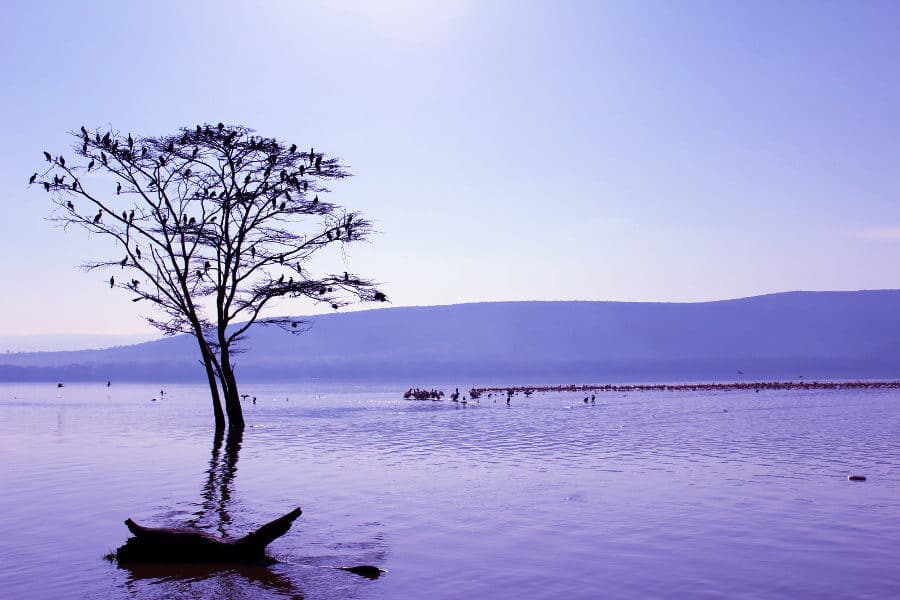