“Malachite kingfisher.” With such a name, it is no surprise how beautiful the bird is. This African local spends most of the day basking in the sun by the river – waiting for its next catch.

If you think of the word kingfisher, you might be expecting a large bird of prey. However, malachite kingfishers are actually quite small and hard to spot if you don’t know what you’re looking for.

Luckily, the bird species thrives throughout Southern Africa. All you need to do is look for the nearest slow-moving river. There’s a good chance of spotting this African miniature and plenty of other birdlife on safari.

If you’re keen to learn more about these flashy birds, read on for ten interesting malachite kingfisher facts. 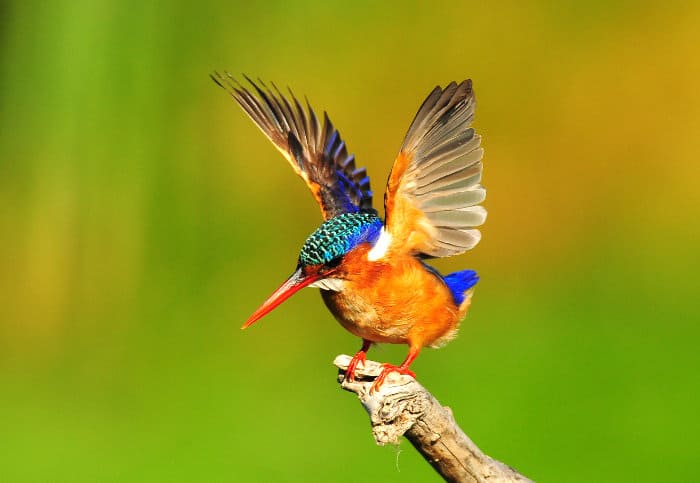 Malachite is a beautiful green colored mineral. Even though their name includes malachite, these birds are not actually green. So, what does a malachite kingfisher look like?

Malachite kingfishers have two contrasting colors. Their belly and chest are a combination of reddish-brown and white, while their backs are predominantly blue. So then where does this bird get its name from?

Malachites might not look green at first glance, but you will understand when you get a better look. On top of their head, they have the most beautiful blend of blue, green, and black feathers which seemingly glisten in the sun. Just like the precious mineral.

2. There Are Different Types of Malachite Kingfishers

Up until 2008, this was the only type of kingfisher in the species C. cristatus. A new study now divides these magnificent birds into 5 different subspecies. 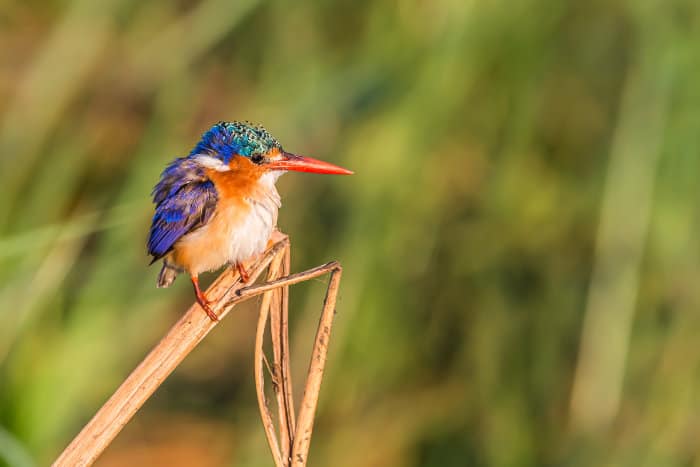 Don’t let the kingfisher’s size fool you. Although male and female kingfishers only grow around 13 cm in length, they are still fiercely territorial. These solitary birds usually live alone – except during the breeding season.

If you’re a rival bird, it’s best to avoid another kingfisher’s stretch of the river. They can enter into vicious battles, starting with threat displays and leading to bill-grappling, flying attacks, and aerial chases.

The winner is the one who gets to call that part of the river home – that is until the next rival comes along to challenge them.

4. Kingfishers Live Where They Eat

Any good fisherman lives close to his source of food. So, where are malachite kingfishers’ habitat?

Malachite kingfishers have been doing this for a long time and design their homes to match their diet. They live alongside rivers or ponds from which they fish from.

With the help of their mate, these birds burrow deep into the sandy banks they call home. The burrows usually go up an incline until you reach their nesting chamber.

5. These Birds Are Great Parents – Until They Aren’t 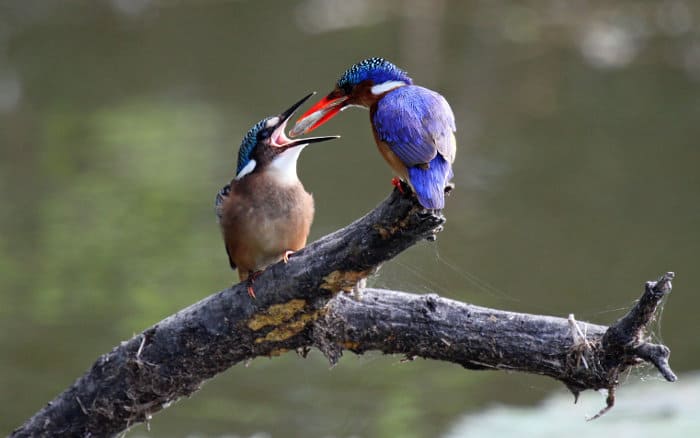 Female malachites lay between 3-6 eggs. Both the male and female birds incubate the eggs.

Once they hatch, the parents spend most of their time and energy bringing back tilapia for the babies to eat. They are such caring parents that, within just a few weeks, the babies actually weigh more than them.

At this point, they start decreasing the feedings and the fledglings begin losing weight. After being in the home for barely over 30 days, the parents chase their juveniles away. Talk about kicking your baby out of the nest.

Along with many other river and water kingfishers, malachite kingfishers have some of the best eyes in the animal kingdom. These tiny birds spend their days by the river on a perch. Here they will sit and wait, watching the waters below.

With their excellent eyesight, they are able to spot tiny fish, frogs, and even water insects. That’s not all. There is a special kingfisher adaptation that these birds use to catch their prey – they can adjust for light refraction. Allowing them to tell exactly how deep a fish is before even starting to fly. 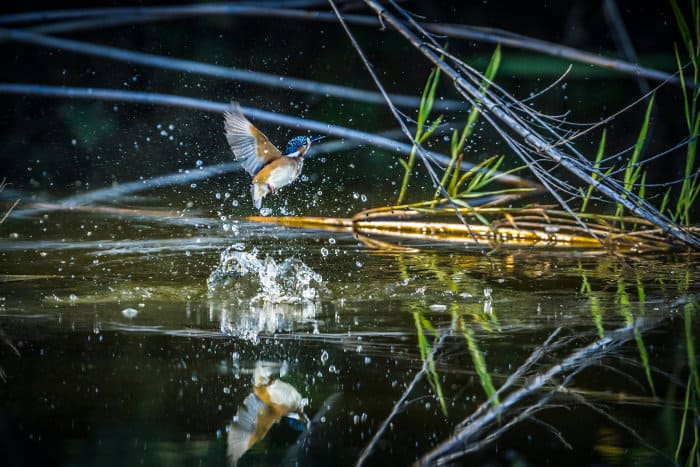 There’s nothing quite like watching a malachite kingfisher hunt. These minute birds sit low over the water, waiting for prey to catch their eye.

In an instant, they dart off their perch and dive into the water. Almost as quickly as it left, the kingfisher is back on its spot with prey in its mouth. Even if you can’t see it in person, plenty of kingfisher images portray this magnificent act.

The malachite kingfisher is part of a group of ‘river kingfishers’. Despite their name, these birds don’t only eat fish. Anything small enough can be a delicious meal for a hungry kingfisher.

Kingfishers eat insects, frogs, crabs, or even lizards. This, of course, is in addition to their number one preference – live fish. 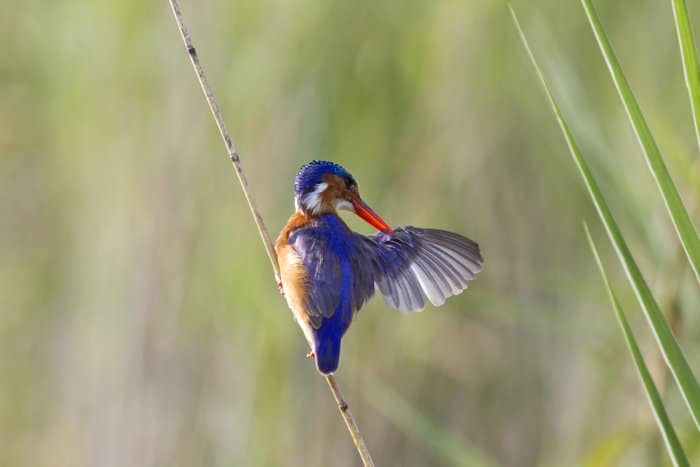 From the top of the head to the tip of the tail, every inch of their plumage is meticulously inspected; removing any dirt, excess oil and parasites. Kingfishers also keep their beak clean by scraping it against a branch or other rough surface.

While this title can’t go to malachite kingfishers alone, they are part of the basal subfamily Alcedininae. Kingfishers also live in America, parts of the Middle East, and Australasia, yet their origins lie in Africa.

The Alcedininae include all river kingfishers, of which there are 35 different species divided into four genera. The malachite group is part of the genus Corythornis. This includes Madagascan pygmy kingfishers, white-bellied kingfishers, and Malagasy kingfishers.

The other two subfamilies are Halcyoninae and Cerylinae. With the latter including the pied kingfisher.

Jewels of the Sky 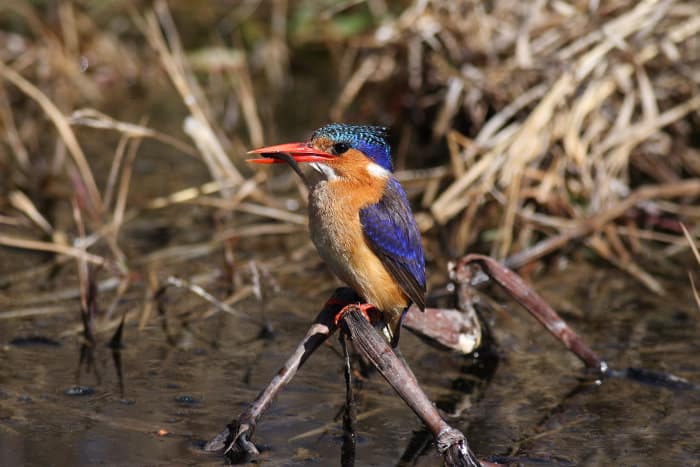 These magical birds are a wonder to behold. Whether you are just marvelling in their splendid colours, or get to watch them hunting, malachite kingfishers are well worth a trip to Africa.

The next time you find yourself in this part of the world, make sure to book a safari to catch a glimpse of one of the planet’s most efficient hunters. 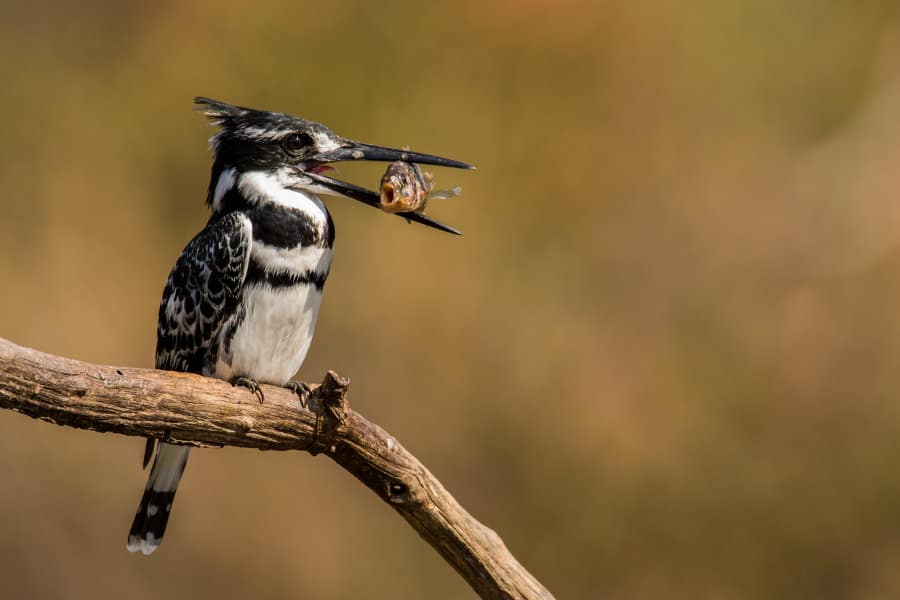