The pied kingfisher is a skilled hunter with remarkable abilities and interesting habits. The species is definitely one of Africa’s most interesting black and white animals.

If you evoke a kingfisher image, you see its unmistakable dagger beak. Well, the pied kingfisher is even more recognizable due to its simple black and white colors and its comparatively larger size.

It is one of the most largely populated species, ranking in the top three. These high numbers could be due to its specialized hunting abilities, which no other kingfisher species possesses.

Find out more about this interesting African bird with these 12 kingfisher fun facts.

1. The Kingfisher’s Black and White Feathers Resemble Bowties and Bikinis 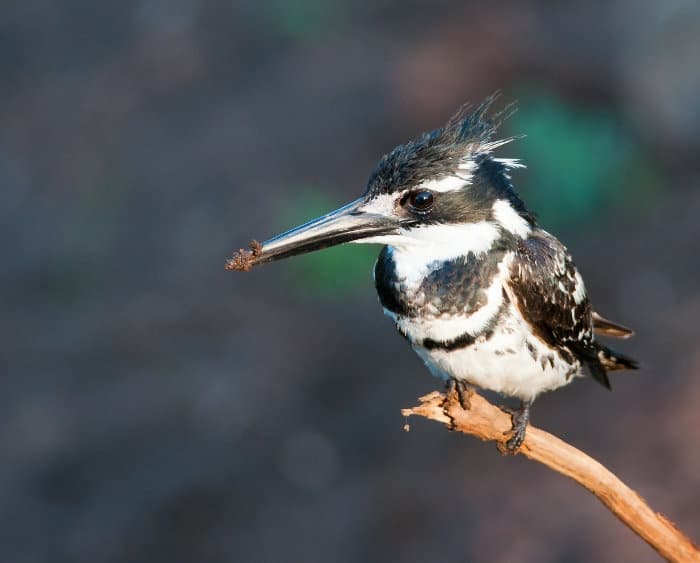 With it’s black and white plumage and crest with a mottled wing pattern, the pied kingfisher is not exactly the most beautiful bird in Africa. However, it is the most recognizable kingfisher species.

But sometimes, it can be tricky to identify gender in birds. Luckily pied kingfishers perpetuate gender stereotypes.

The male kingfisher has two black bands across the chest, which look similar to a bowtie. The female, on the other hand, has a singular gorget often split down the middle, which has a startling likeness to a bikini!

The distinctive hunting technique of pied kingfishers has earned the species a few records. Not only are they the largest hovering bird. But they are also the only kingfishers with the ability to perform a figure of eight wing stroke.

They hunt by hovering 50-65 feet above the water and then diving headfirst (or rather, bill-first) into the water. Pied kingfishers demonstrate spectacular speed and agility on the hunt.

The kingfisher bird’s black and white colors and hovering ability are their most distinctive qualities. You’ll often spot the pied kingfisher live in action, hovering over bodies of water.

Courtship for kingfishers is rather unique. It also involves a fair amount of dancing. Dancing displays are gregarious and generally comprise 3 to 12 males.

When dancing, the kingfishers noisily call one another with a loud “kwik” or high-pitched “TREEtiti” sound. They also hold their wings half spread and may sometimes engage in fights, interlocking their beaks.

Following this, the male tries to attract the females by offering food. This is done over the course of about three weeks. This then leads to breeding as well as non-cooperative breeding, which we cover in the next fact.

4. Pied Kingfisher Birds Are All About Community 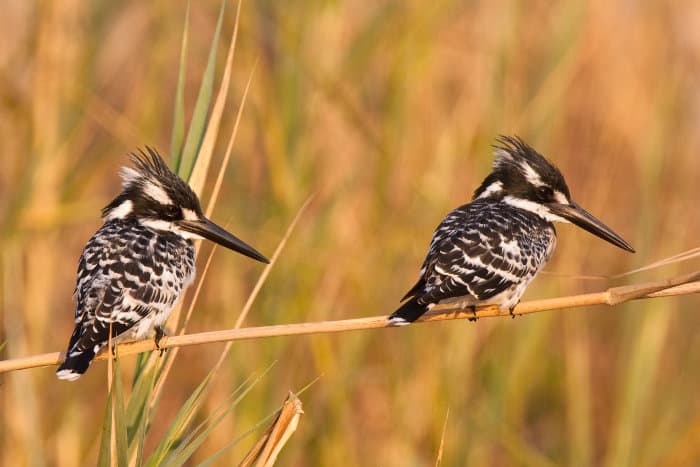 It takes a village to raise a child. And the pied kingfishers know this. They are extremely social birds and often hang out in pairs or small groups.

They are cooperative breeders. This means that there can be up to four ‘helpers’ who assist the parents in caring for their young. These helpers are oftentimes adult birds who have failed to raise chicks of their own.

It’s no wonder pied kingfisher numbers are so high. With so many ‘hands’ to raise chicks and defend territory.

5. It’s Fish on the Menu for Pied Kingfishers

Wondering what do kingfishers eat?

Their diet consists predominantly of fish, with a few crustaceans on the side. Fish is their favorite meal. But they hunt in freshwater and saltwater, so they are not averse to aquatic insects or amphibians.

They also eat small crustaceans, dragonfly larvae, mollusks, and frogs. The one definitive dietary rule is that their food is always aquatic. 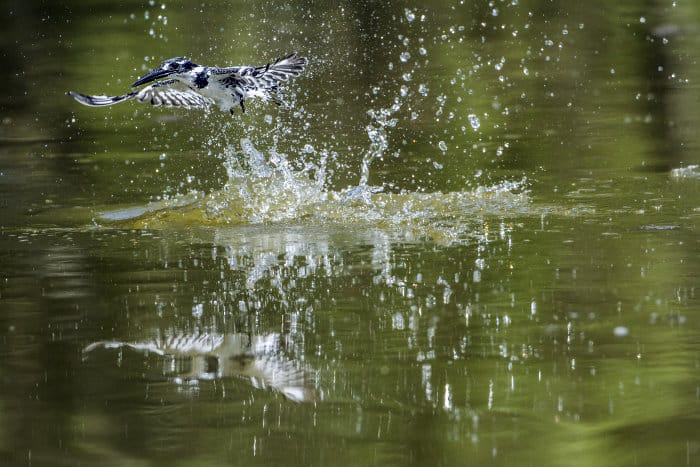 Unlike some of its relatives, the pied kingfisher prefers a more permanent home. Spread throughout Asia and Sub-Saharan Africa, they are not migratory birds.

They will move short distances according to seasons. But are happy with their unexpanded horizons.

7. The Black and White Kingfisher Bird Can Hunt Over Water

The unique hunting strategy extends beyond their ability to catch prey. The pied kingfisher’s method of hovering is also called aerial perching.

Unlike other kingfishers, the pied kingfisher can swallow small prey while flying. They don’t require a perch to eat. This means that they can hunt over large bodies of water that lack places to sit or stand.

These specialized flying abilities allow the kingfishers to adapt to any watered habitat.

8. You Won’t Spot the Pied Kingfisher’s Nest in a Tree 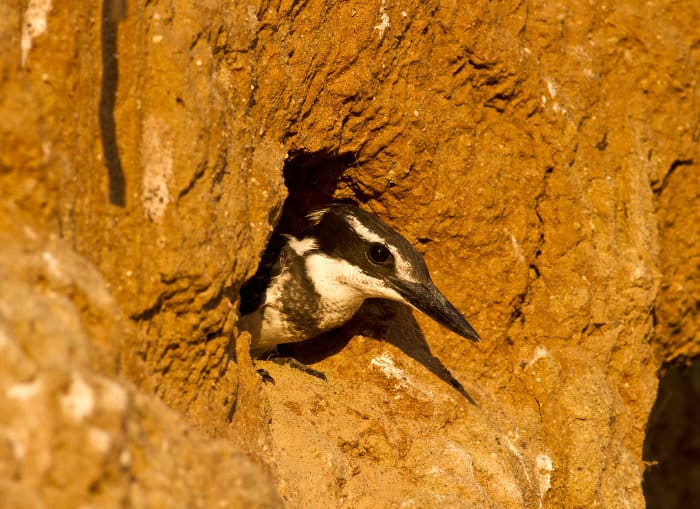 Staying true to its species name of water kingfisher, pied kingfishers make their nests close to water. They make them by digging out holes in vertical mud banks!  These peculiar nests are generally 4-5 feet deep.

Pied kingfishers don’t spend too much time in their cavernous nest. And usually spend many hours perched outside to conserve energy for hunting.

9. The Black and White Kingfisher Has Underwater Vision

By now, it is clear that pied kingfishers are exceptional hunters. And a big part of their superior hunting strategy is their unique vision.

Kingfisher’s eyes have adapted to spot the exact position of fish from above. Once the kingfisher spots the prey, refractions in the water don’t affect its vision.

It has the ability to correct according to refraction and react to the sudden movements of its prey.

To top it all off, the pied kingfisher closes its transparent eyelid to assist with vision underwater. 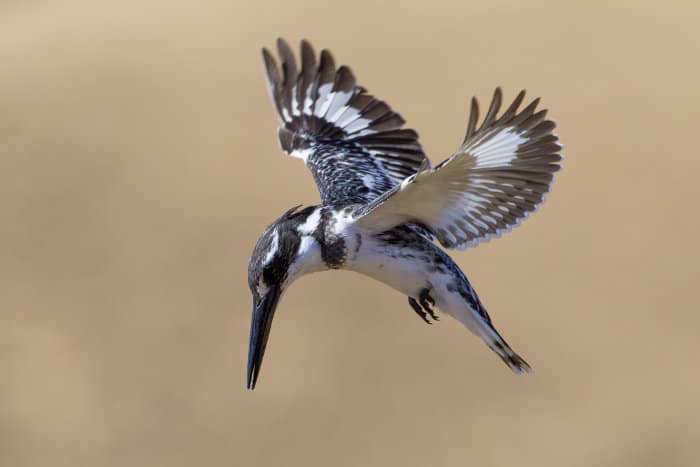 The pied kingfisher’s Latin name is Ceryle rudis. It is the only member of the Ceryle genus, which derives from the Greek word kērulos. This is the name of a mythical bird that Aristotle has made reference to in his works.

Rudis is the Latin word for ‘rude’ or ‘wild’. The ‘mythical wild’ bird is an appropriate name for a bird with almost fantastical hunting skills.

With its lengthy beak and nimble size, the pied kingfisher flies low and straight like a bullet, reaching speeds of 25 miles per hour.

The beaks slice soundlessly through the air and water, allowing them to dive and strike without alerting their prey.

Japanese engineers have drawn inspiration from the pied kingfisher’s genetic make up when designing high-speed bullet trains. In the past, these trains were so fast that they made a loud noise when exiting tunnels.

The engineers remodeled the face of the trains to be sharp and lengthy like the beak of a kingfisher bird. This helped prevent the sonic boom and save energy as the train was more aerodynamic.

12. The Black and White Kingfisher Species is Not Going Anywhere 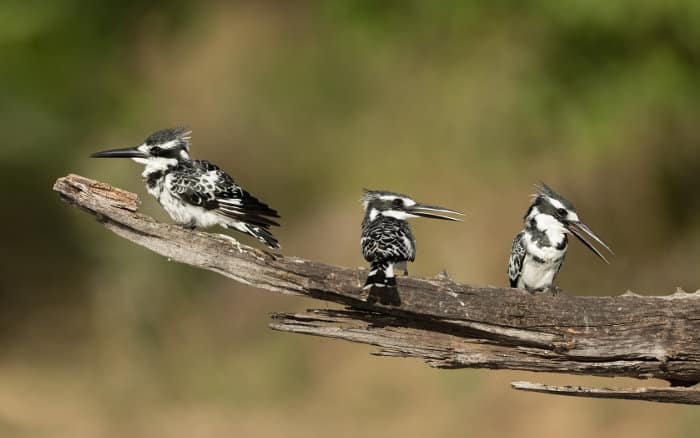 Perhaps the best fact about the pied kingfisher is that the species is not endangered. Africa has no shortage of critically endangered species, but these birds aren’t one of them.

Pied kingfishers have a wide and populous reach throughout the world.

See The White and Black Kingfisher in the Wild

The pied kingfisher isn’t a magical burst of color shooting through the air like the malachite kingfisher. But hopefully, this list has shed light on what sets these brilliant birds apart.

Simply watching the pied kingfisher in action will demonstrate the array of superpowers that it has. It is a record-breaker, expert flier, skilled hunter and best of all – loves to socialize.

With pied kingfisher numbers so high and their habitat extending throughout Sub-Saharan Africa, you can easily spot them on an African safari. 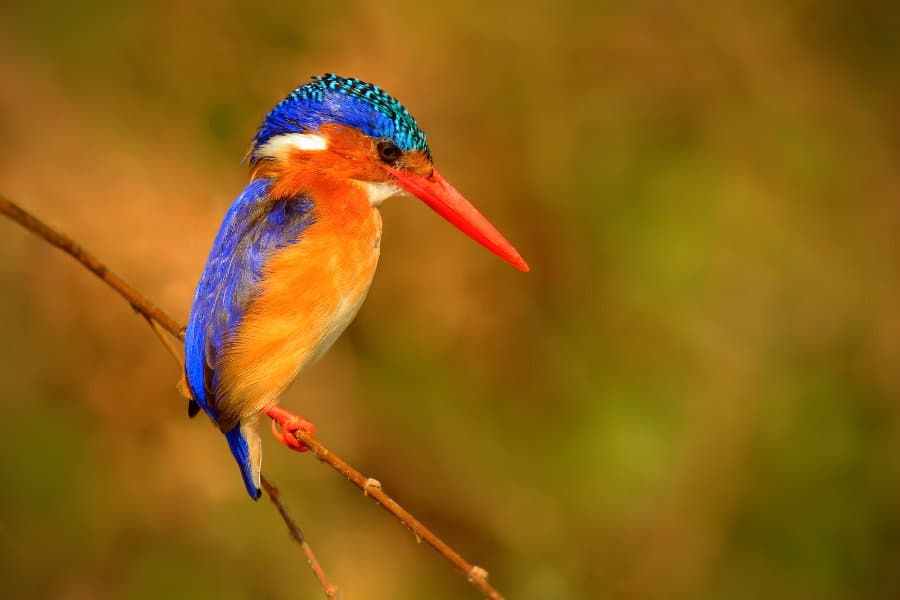