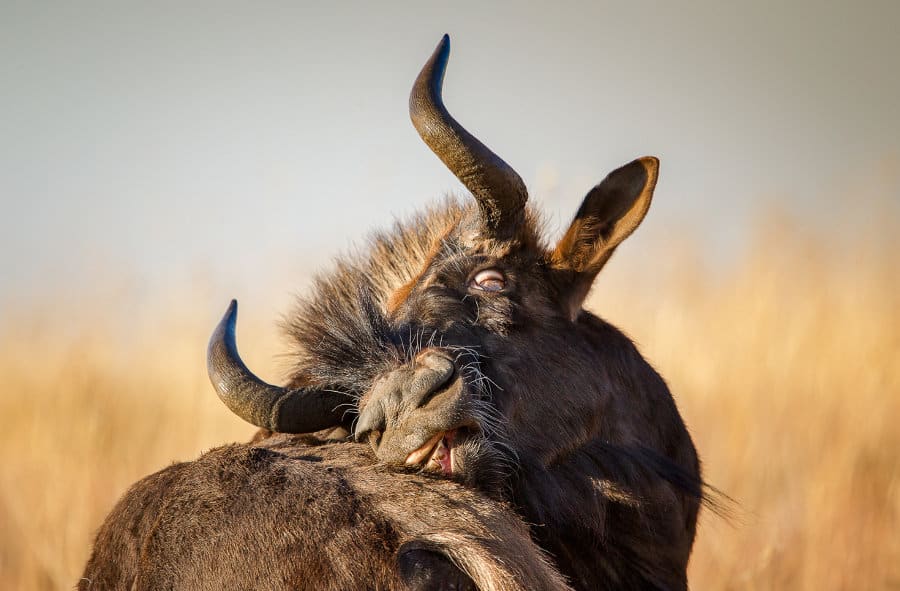 Seeing herds of black wildebeest on a Southern African safari is exhilarating. The wildebeest’s size and power is impressive, and this power grows when the animals are in groups of more than 50. However, they do not migrate in the same impressive fashion as the blue wildebeest.

The black wildebeest has forward-facing horns and is smaller than the blue wildebeest. Its scientific name is Connochaetes gnou, although a variety of names exist, passed down through stories told in different Southern African languages. It is most commonly known as a white-tailed gnu. 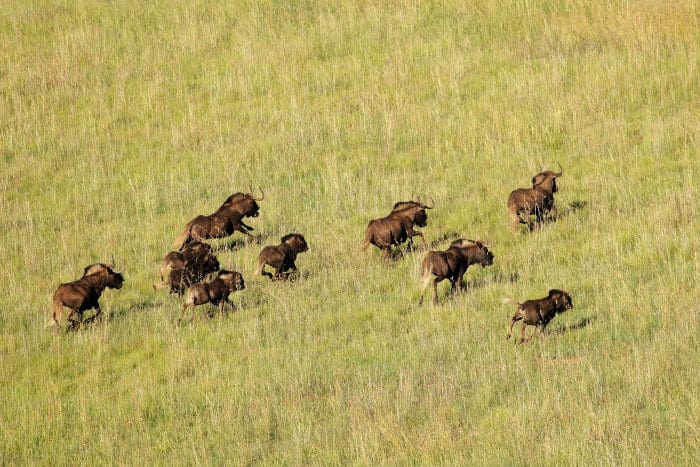 The black and blue wildebeest originate in Africa and belong to the Bovidae family. Often misspelled ’Wilderbeast,’ these animals do have a wild and beastly appearance. Mature males are dark brown in color. Females are brown and baby gnus are a light yellowish tan.

The black wildebeest has a large head, wide nostrils and two horns that curve forward. It has a tuft of firm black hair on the muzzle, a black beard, and a long fringe running underneath the neck to the forelegs. A stiff mane on the back of the neck leads down to the defining white-colored tail.

The name ‘white-tailed gnu’ developed from the distinct white tail and the Khoikhoi word for the animal, ‘gnou’. Black wildebeest are also known as swartwildebees in Afrikaans, inkonkoni in isiZulu, inqu in isiXhosa and hongonyi in Tsonga.

These wildebeest form herds of 10 to 60 animals, within which three social groups usually exist: a herd made up of females and calves; a bachelor herd; and a herd with a territorial adult bull. The bachelor herds tend to travel while the female herd sticks to a home range of 100 hectares in size.

An adult bull will hold a territory in an open grassy area on its own. He uses it as a stomping ground, marking the area with urine, droppings and scents. Wildebeest leave their scent on the trees by scraping up against them; the glands below their eyes and hooves emit their smell.

A strong bull approached by females will attempt to herd them and chase any competing males away. A challenge between two bulls begins by approaching each other with heads lowered. They stand in a reverse-parallel angle where one male urinates and the other sniffs.

The ritual may repeat with the males each performing flehmen, an audible sniff. Dismissively looking away or circling can escalate to the bulls tossing their horns at one another. The low-intensity fighting of interlocking horns and pushing while standing can become more violent.

Heads drop as the animals begin to push from the knees. This behaviour indicates a high-intensity fight and can lead to injury or toppling over. After asserting dominance over his rival, the winner chases the losing bull away from the territory.

Size of a Wildebeest 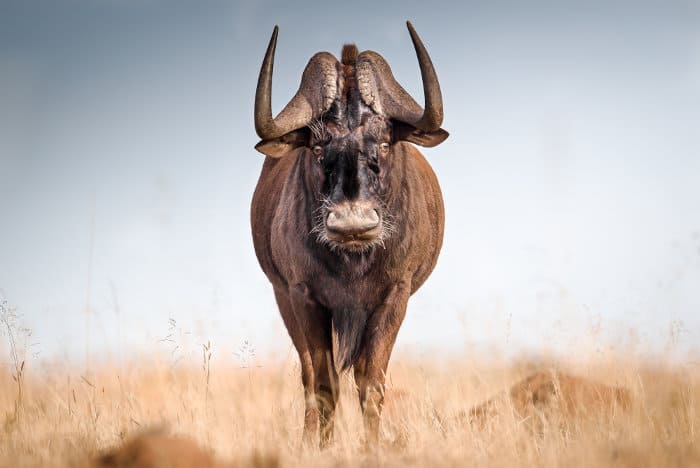 An adult male weighs 160 to 205 kg while the female weighs 130 to 145 kg. A newly born black wildebeest weighs 11 kg and is able to run with its herd within minutes. Despite an adult wildebeest’s weight, it can achieve top speeds of 75 km/h.

Both male and female wildebeest develop pairs of horns. Black wildebeest occasionally rub their cheeks on companions’ necks as a sign of affection. The pair of horns curve down, forward and then upwards. Hook-like in appearance, the horns are able to reach a length of 78 cm.

The horns differ from those of the blue wildebeest which project laterally. The base of the horns are wide and flat forming a protective shield. Male wildebeest show dominance through the ritual explained above, which involves ramming heads with the opposing male. 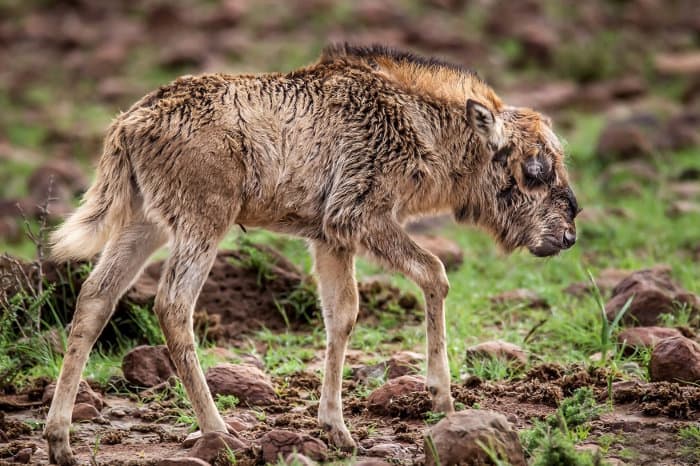 A male wildebeest spends its first year in the company of its mother and will join groupings of adolescent males from the age of one. Young males leave their mothers’ side when calving season starts, while young females remain in groupings with adult females.

What is the average lifespan of a wildebeest? A fortunate adult wildebeest can live to 22 years old. From four years old, mature bulls will set up their own territories separated from other males. With more than 18 000 animals, the black wildebeest population is on an upward trend.

Females breed once yearly, usually coinciding with the end of the rainy season, from February to April. Females reach reproductive maturity from as early as 16 months, when they can begin breeding. Males reach sexual maturity from 16 months but typically mate from 3 years old.

Mothers are pregnant for an average of 8.5 months. After birth, wildebeest calves stay alongside the mother while the males provide no care. Dominant males defend access to a harem of females and chase the maturing males away, often with fatal consequences.

Where Do Wildebeests Live? 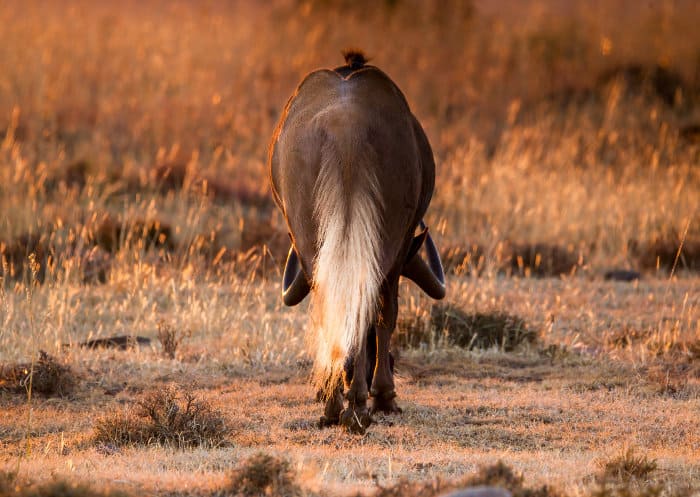 According to fossil history, the two species of wildebeest claimed different geological areas. The black wildebeest are nomadic and live within reserves in Lesotho, Swaziland, South Africa and Namibia. The species’ thicker and darker coat developed from occupying this southern region.

Blue wildebeest are famously known for crossing the Serengeti in the world’s largest animal migration. This impressive migration is not possible on the same scale with black wildebeest. They exist in much smaller numbers in South Africa in fenced-off parks and reserves.

Black wildebeest also cover large areas while grazing, preferring to move across open plains and savanna grasslands where predators are easier to spot.

Protected by laws in South Africa, the black and blue wildebeest cannot be on the same property or reserve. The two species are able to reproduce with one another, and the hybrid is often larger than the parents; posing a threat to the conservation of the animals’ genetic pool.

What Do Gnus Eat?

As herbivores, the black wildebeest eats bark, flowers, leaves, and shoots. Living in arid regions, the animal sustains itself on bushes and shrubs. The newborn wildebeest feeds from its lactating mother for 6-8 months and will begin to eat grasses from four weeks old.

A wildebeest’s diet consists of 93% grass, 3 to 4% karoo bushes, and 3% herbs. They are unselective grazers and prefer short grasses which afford them better visibility to guard against predators. When experiencing hot weather, the wildebeest will feed at night and rest in the day.

Water is an essential requirement when living in an arid wilderness. Wildebeest prefer grazing in areas near a water source but are able to live without drinking water every day. Moving in a loose group, a herd will overgraze a habitat if fencing limits their movement. 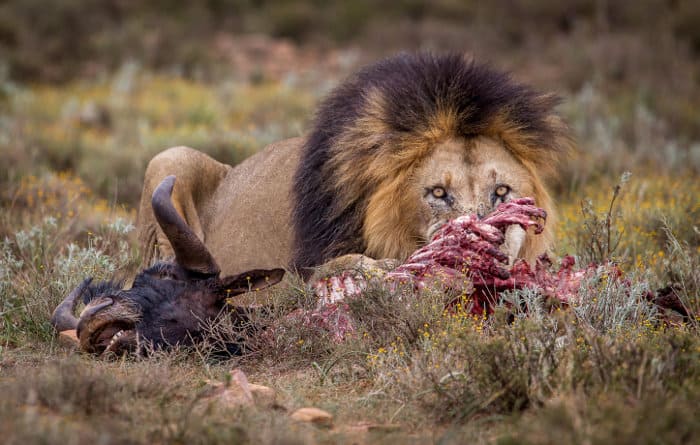 Alongside natural predators and hunters, there is the threat from a loss of the wildebeest’s habitat. As human settlements continue to grow, the natural habitats for wildebeest living outside of nature reserves continue to disappear.

Predators of wildebeest include carnivores such as lions, leopard, hyena and crocodiles. The crocodile attacks young, old and sick animals when they are drinking water. While lions are large enough to target the adults, leopards and hyenas target the calves.

People still hunt these animals for the skin and meat, or as a trophy. The International Union for Conservation of Nature listed the black wildebeest numbers as increasing and as a species of ‘least concern’. Conservation goals include preventing the hybridisation of the two species.

When in danger, a black wildebeest gives a loud shout and makes a ‘ge-nu’ sound to warn others. The members of the herd use a loud ‘hic’ sound accompanied by an upward jerk of the chin to communicate with each other. The sound travels up to 1.5 km away.

Territorial bulls defending a stomping ground communicate with other males through scent and markings. When approached they use body language to assert their dominance. The following behaviour acts as warning signals to the approaching male:

As mentioned, the two males then begin a ritual to size one another up. The encounter can lead to a fight, ending in the losing male backing away from the territory. 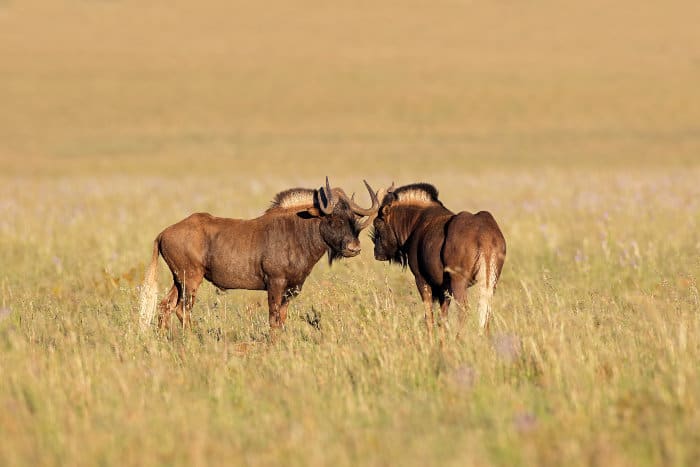 As mentioned above, the black wildebeests’ numbers are growing. Nevertheless, natural environments still require constant conservation. Through tourism and education, the habitat of a wildebeest can remain protected.

These herbivores cover important tracts of land and lead intriguing lives. The impressive newborn calf’s attempts at standing only minutes after birth is a testament to their instinct for survival. Referring to these animals by many names, the people of southern Africa adore the black wildebeest.

Have you seen a black wildebeest? Visit southern Africa to see the white-tailed gnu on a safari to suit your budget. 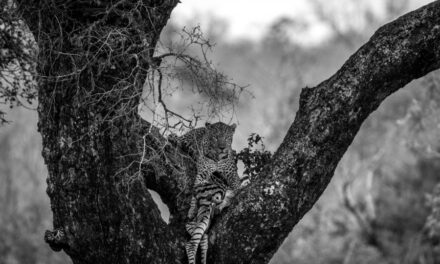 What do leopards eat? Facts about their diet and lifestyle 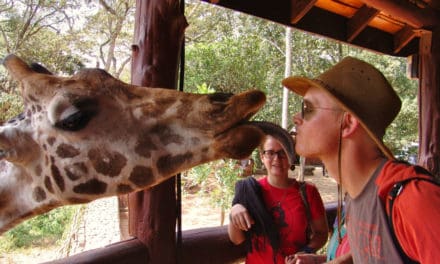 Why are Grevy’s zebras endangered? And how can they be saved? 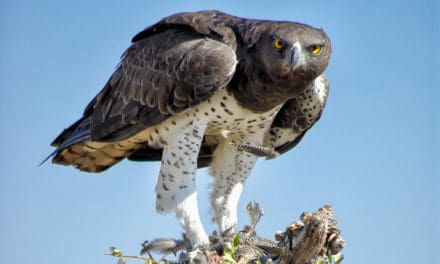