Charismatic critters don’t always have to be big. Meerkats, or suricates, are a prime example.

You’re probably picturing this pint-sized African animal standing to attention. Maybe even trading wisecracks with a warthog. But behind the cartoons and the cute exterior, there lies a fascinating and complex character.

Browse this collection of meerkat facts and get acquainted with Africa’s mischievous miniature mammal.

“Meerkat” Meaning – What’s in a Name? 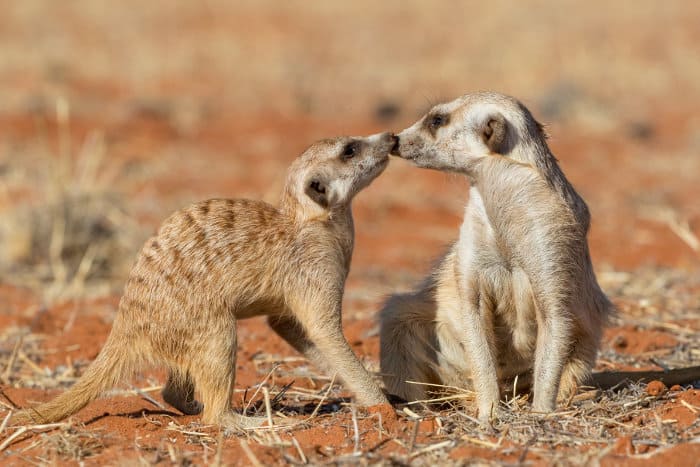 Despite its name, the meerkat is no mere cat.

The word ‘meerkat’ derives from a Dutch word for a type of monkey! Monkeys were also called markat in Hindi.

‘Kat’ does indeed mean cat in Afrikaans. The first half of the name may refer to either meer (lake) or mier (termite).

So, translating this monkey/lake cat/termite cat’s name doesn’t tell us much.

What is a meerkat? 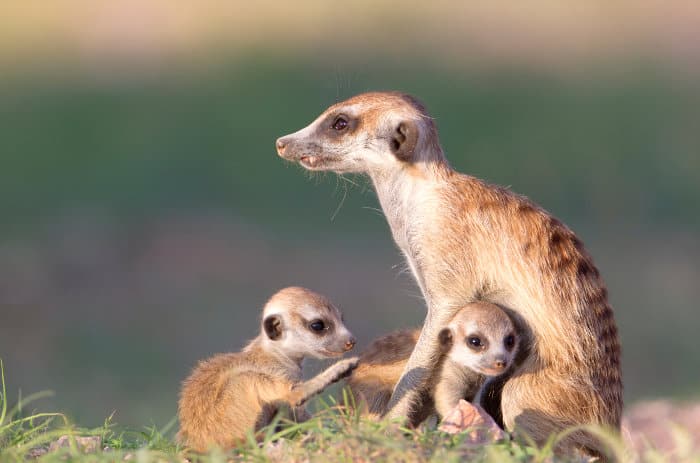 Historically, the word meerkat was used for any small burrowing animals in South Africa. These days it refers to just one species.

As we’ve established, that species isn’t a cat. (It’s not a monkey, either!)

The meerkat is actually a mongoose in the family Herpestidae. Mongooses are small, carnivorous mammals. They comprise over 30 species, and 11 in Africa alone.

What is a suricate?

What is a suricate, then? It’s simply another name for the same animal. The meerkat’s scientific name is Suricata suricatta.

The word suricate comes from the French surikate, which probably derives from a native South African word.

Are you keeping track? That’s European, Indian, and African origins. It’s enough to make you feel sorry for etymologists.

Now we (sort of) know how the suricate got its name, let’s focus on some more meerkat facts about the animal itself.

Where Do Meerkats Live? 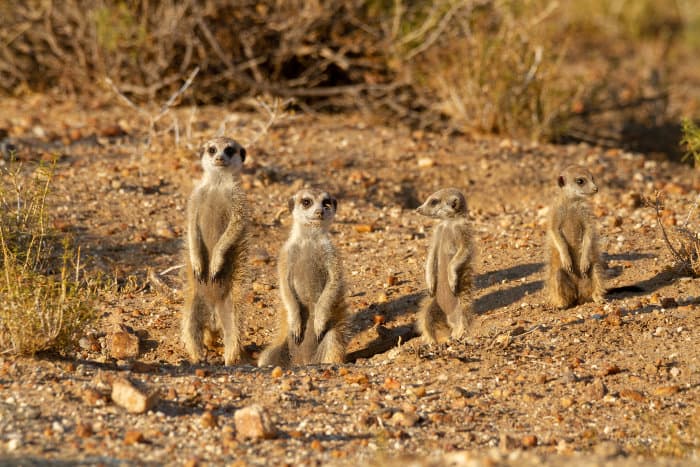 Meerkats live in southern Africa. They’re mainly found in arid, open habitats, mainly in Botswana, South Africa, and Namibia. Suricates prefer areas with short grasses and scrub and can be found in the sandy savannas of the Kalahari.

More specifically, they make their homes in burrows. Meerkats are excellent diggers, but they’re smart. They often spare themselves the hard work and share burrows made by other animals like ground squirrels, or other mongooses.

The burrows are ideal for sleeping, safety, and shelter from the sun. Inside, it’s cooler during the day and warmer at night. Deeper tunnels maintain a consistent, comfortable temperature.

Most mongoose species are solitary creatures, yet meerkats buck the trend. Suricates are highly social and live in groups of up to 50 individuals called a mob, gang, or clan. These clans are made up of several families, with one dominant pair of ‘breeders.’

The social suricates will forage, groom, and play together. But it’s them against the world. They’re constantly vigilant for threats and need to rely on each other.

Meerkats are diurnal. They’re mostly active during the day, though will retreat to their burrows at night, or if daytime temperatures get too high.

One cute meerkat fact is that they’ll huddle together for warmth when sleeping. Another method of temperature regulation is sunbathing; they’ll catch some rays to give them the energy for a day’s hunt. 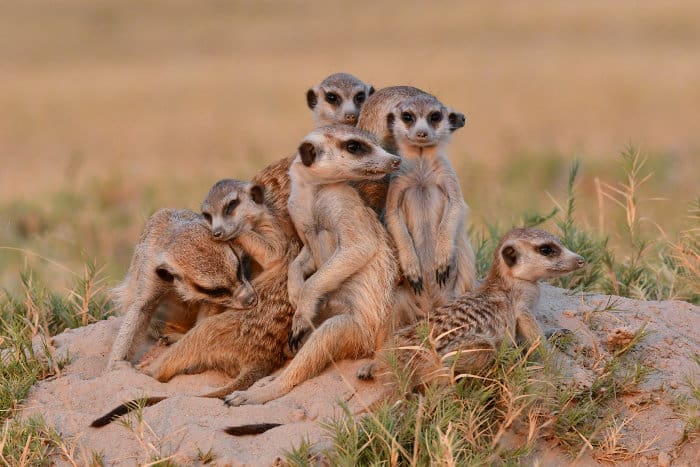 One African proverb states that “it takes a village to raise a child.”

Substitute ‘village’ for ‘meerkat mob’ and you’ve got a good idea how their offspring are raised.

Meerkats are known as a ‘cooperatively breeding’ species. Usually, the dominant pair of breeders will produce the bulk of the offspring. It’s left to the lower ranking, subordinate suricates to raise the pups.

It may sound like one big happy family within a single mob, yet squabbles are common. High ranking meerkats often act aggressively to their subordinates, however there are always younger individuals waiting to overthrow them.

Meerkats may (mostly) get along with the rest of their mob, although encounters with rival groups are often aggressive.

Suricates have scent pouches for marking their territory. When two mobs’ territories overlap, they’ll face off. Sometimes a display will suffice; other times things escalate to violence.

Don’t mess with the meerkat mob.

What Do Meerkats Eat?

The Lion King might not have been the best source of meerkat facts, but it was accurate at showing the meerkat’s diet. Suricates are insatiable insectivores and like nothing better than grabbing a few grubs for dinner.

Meerkats will spend several hours a day foraging for their favourite food. This includes beetles, moths and other insects, reptiles, small mammals, fruits, roots, and tubers.

Suricates have an excellent sense of smell. They use their noses to sniff out potential prey, then dig it out or flip stones to find their meal.

Since they live in testing conditions where water is often scarce, meerkats have adapted to survive without drinking much. One of the more interesting meerkat facts? They get most of their water from the food they eat. 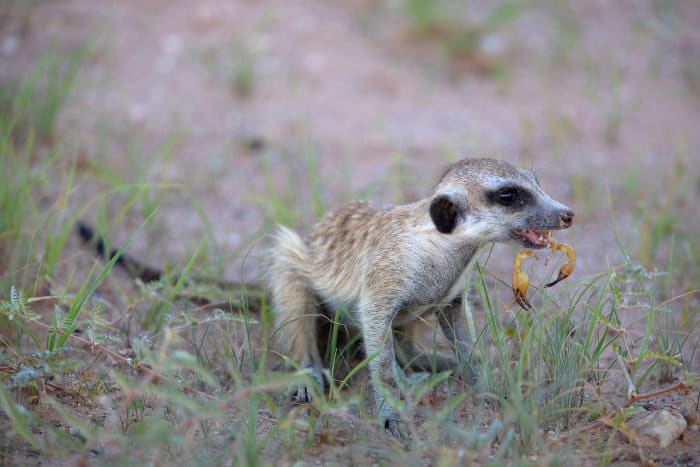 Suricates may look innocuous, but they also have a taste for more dangerous prey. Namely, scorpions.

The crafty meerkats have devised a technique to neutralise their venomous foe. Yet they’ll have to be quick.

They go straight for the stinger, biting it off before the scorpion can inject any venom. (Meerkats have some degree of resistance to the stings, though it’s still not a harmless target.)

Adults even use live scorpions when teaching young meerkats to hunt. Nonetheless, they will ‘disarm’ (or distail) the scorpion first, biting off its stinger so it poses less of a threat.

Why Do Meerkats Stand Up?

Picture a meerkat in their trademark pose, standing on their hind legs and surveying the savanna.

There’s an important reason for this. Life is tough when you’re a miniature mongoose surrounded by predators.

Meerkats can’t afford to take their eyes off their surroundings if they want to stay off the menu. Standing up gives them a better view, and they’ll often clamber up to higher ground for improved visibility.

They’ve even been known to climb on top of wildlife photographers!

Luckily, staying vigilant is easier when you live in a big family group. Certain meerkats will always be on sentry duty, allowing the rest of the clan to forage until the suricate sentry sounds the warning. 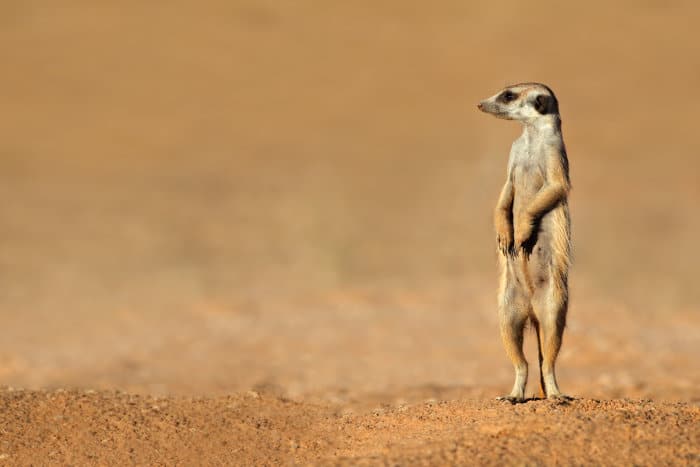 Lots of African animals would like to make a snack out of the suricate. Meerkats have to worry about both air and ground attack, from predators like eagles, foxes, and jackals.

That means it’s smart not to stray too far from the burrows. When the suricate sentry sounds the alarm, the meerkats will often dive to safety.

Meerkats don’t always flee from a predator. Sometimes they’ll gang up to deter a dangerous foe.

You’ve probably seen their Asian relatives do battle with cobras, however meerkats aren’t to be outdone! They’ll also go toe-to-toe with venomous snakes, surrounding or “mobbing” them while raising their tails.

Many mongooses have immunity to snake venom, and meerkats are no different. They’re not completely immune to all snake venom, but they will often survive snake bites that could kill larger creatures.

Usually, this teamwork will send the snake packing before anyone gets bitten.

Another meerkat fact The Lion King got right was that they’re very vocal.

No, that doesn’t mean they burst into song; yet they do use many different calls to communicate.

Meerkats have calls for different situations, from predator alarm calls to digging, caring for young, or showing aggression. The intensity of the calls also conveys important information.

From purrs and chatters to barks and squeaks, the sheer range of meerkat sounds shows how complex these creatures are.

(You even see them on TV speaking in a Russian accent, but I’m not sure how accurate that is. 🙂 )

Are meerkats dangerous? It might sound like a silly question, though these cute critters have a dark side. One of the more surprising meerkat facts is that they’re the most murderous mammals.

More accurately, they’re the most murderous towards other meerkats. A study in the journal Nature found that almost 20 percent of meerkats are killed by their own kind. The overall average for all mammals? Just 0.3 percent!

So, why are the social suricates bumping each other off so often? Many of the deaths are related to the social hierarchy. Dominant breeding females, for instance, will kill the young of subordinate pack members.

It’s tough staying at the top.

Are meerkats dangerous to humans? Apart from extremely rare cases of rabies, not at all.

These inquisitive, playful creatures can be quite tame, especially if habituated to human contact. Getting up close and personal with these curious critters makes meerkat tourism a fun activity for animal lovers of all ages. 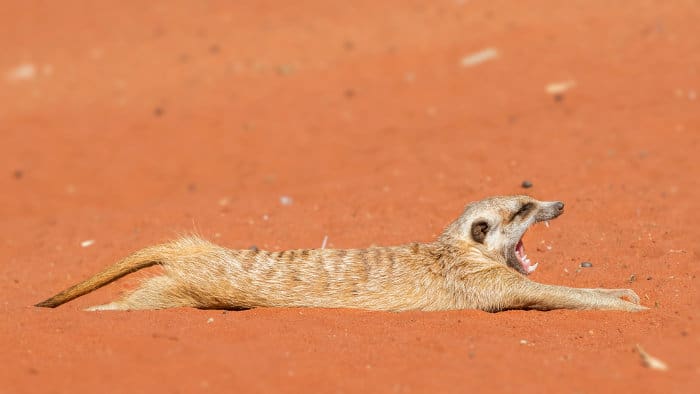 Meerkats are a special sight on safari, whether they’re an added bonus or the main attraction. Makgadikgadi Pans in Botswana and Tswalu Kalahari Reserve in South Africa are just a couple of places to see wild meerkats.

Had your fill of meerkat facts? Plan your dream safari and catch these critters in their natural environment.