Grant’s gazelle, known as swala granti in Swahili, is a type of antelope indigenous to Eastern Africa. Grant’s gazelle took its name from James Augustus Grant: a Scottish explorer of Equatorial Africa in the 19th century.

Often confused with a similar species called Thomson’s gazelle, a number of factors make this animal curiously unique. Many people underappreciate these and other animal prey species when compared to larger predators.

Grant’s gazelles are adaptive and have evolved perfectly for their relatively precarious position in the merciless food chain. Now, let’s take a closer look into the remarkable adaptations of this particular species, scientifically known as Nanger granti. 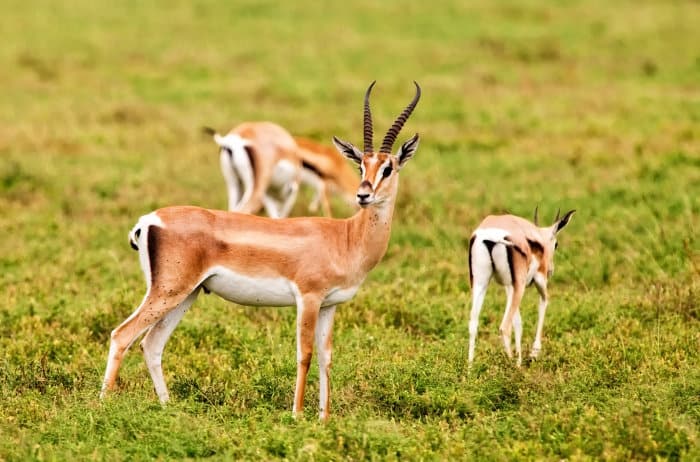 In Equatorial Africa, the summer months can reach blistering temperatures, which results in competition between grazers for food and water.

It’s common to see herbivores gathering in large herds to safely migrate between water-sources between seasonal rains. As if this wasn’t enough, nursing mothers, known as ewes, must protect their vulnerable calves from opportunistic predators.

A life without water

These species seek protection from predators in massive herds. However, this does not protect them from the other dangers of migration such as heat stroke, separation, and crossing crocodile-infested rivers and watering holes. It also causes fierce competition between grazers for available resources.

Being an intelligent, logical, and resourceful animal, swala granti migrates backwards. That is, in the opposite direction of available water. Grant’s Gazelle have evolved to extract water from the food they eat. They can also regulate their water retention by sweating less in the hottest times of the day.

This means that they avoid competition for resources, migrating predators, and can go their whole life without ever taking a sip of water. 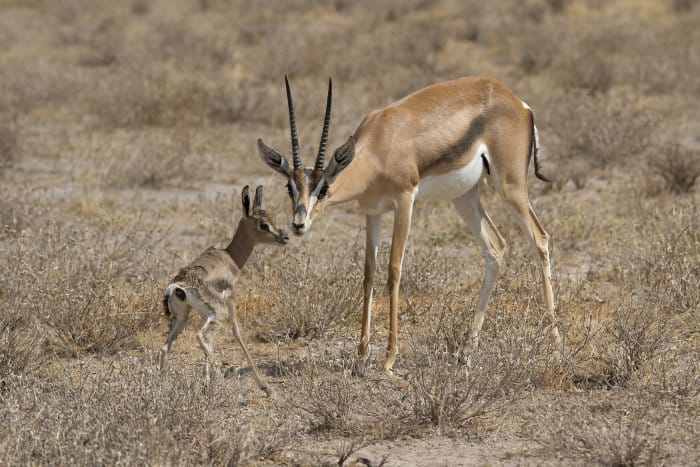 Life is hard for the vulnerable Grant’s gazelle calf, as it is for all young individuals targeted by predators. Naturally, this follows evolutionary logic, which dictates the survival of the fittest. Emotionally, humans want to hide those shaky-legged babies out of harm’s way.

Not surprisingly, the mothering instincts of ewes are not so different. Calves are born in a covered area, away from the open plains where adults graze. Once a mother has fed her calf, it quickly finds its legs.

It then chooses a safe and sheltered area to hide instead of following its mother into the open grasslands. Females will carefully memorize this location and return to their calf several times a day.

Once the calf joins its herd in the big world, it’s very vulnerable to predators. For a relatively docile animal, female Grant’s gazelles will sometimes defend a captured calf by stomping, kicking, and collectively attacking the predator to chase it off. This may result in the safe return of the calf to its mother and herd.

As a species that isn’t a particularly aggressive animal, ewes don’t show aggression unless defending a calf. They are generally docile and demure creatures.

Males, or rams, are not very different, and only tend to engage with each other in adolescence or when defending their own established territory. 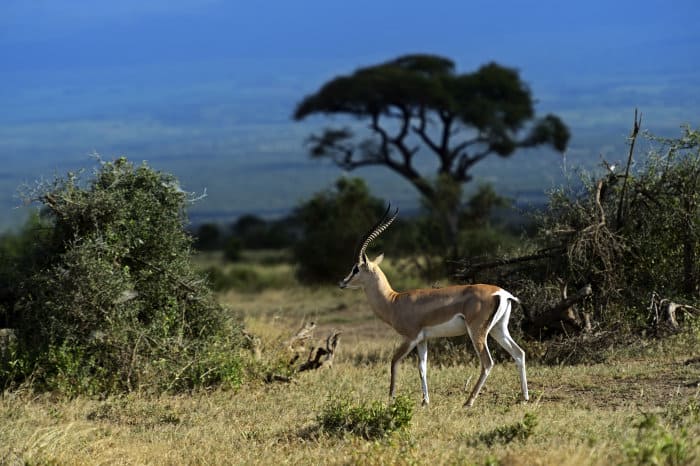 Nanger granti lives exclusively in Eastern Africa. Their migratory range spans between South Sudan, Southern Ethiopia, and Central Tanzania. It also extends down the Kenyan-Somali coast and down to Lake Victoria.

They orient their movements around the best food availability. They prefer to avoid tall grasses, and poorly-drained soil as this blocks their view of predators and inhibits their speed.

Instead, these African animals prefer semi-desert savannas and treeless plains. While they sometimes venture into denser vegetation, they tend to traverse more established paths.

Grant’s gazelles eat mostly the leaves and stems of shrubs and small plants growing in between the grass. However, they can also graze on dried grass if necessary.

By eating water-rich leaves in the cooler evening temperatures, they consume and conserve more water at once. During the day, they munch on leaves as well as wood, bark, and stems.

Interestingly, they control the population of pouched mice by eating the rodents’ food. These mice eat farmers’ crops and spread disease.

Grant’s gazelles don’t have a fixed breeding season. It’s generally agreed upon that the fertility of females depends on their overall wellbeing. This relies on the availability of food and water.

When ewes become fertile, they release sex pheromones in their urine, which attracts nearby rams. Courting consists of the male prancing around with their horns and tails held high.

While Grant’s gazelles gather in herds to protect themselves from predators, these social groupings are relatively loose and will change throughout the year depending on the availability of… you guessed it… food!

When food is plentiful, you’ll find herds of up to 200 individuals enjoying their safety in numbers. As seasons change throughout the year, the larger herds break apart into smaller groups.

These can consist of a dominant male leading females and calves, or bothersome bachelor herds looking to establish their own territorial groups.

Once males reach maturity, they can challenge the patriarch or separate into small bachelor herds. Usually, it’s the latter.

People may take for granted the Grant’s gazelle’s veld-colored fur. Looking a bit further, this graceful creature is a sight to behold. They are a sexually dimorphic species, which means that ewes are visually different from rams. 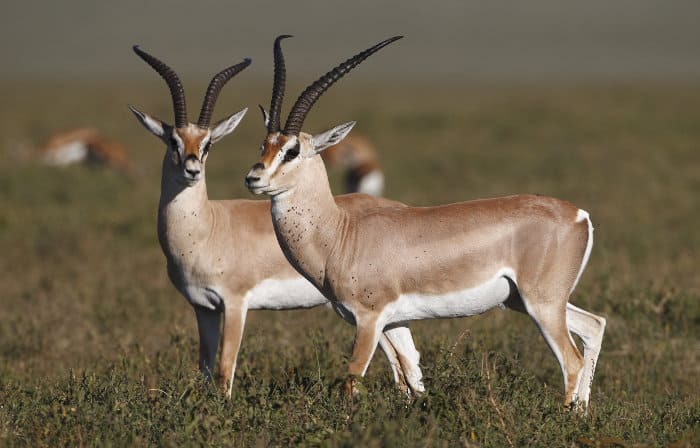 Mid-sized in comparison to other gazelles, Grant’s gazelle has a light tan coat to match the dried grass of their most-exposed habitat. Their white bellies are often outlined with a darker stripe on their flank.

This ranges from a slightly darker tan to brown, through to black. The marking varies between individuals. Researchers believe that for nursing calves, the black stripe acts as a signifier for feeding since females’ black teats similarly contrast their white stomachs.

Females have smaller, shorter and straighter horns than males. Given their motherly ferocity, this can be useful for close combat. The male’s horns are more impressive and ornate. Reaching up to 80 cm, these lyre-shaped horns are wider at their base and extend in rings which eventually meet elegantly in a point. 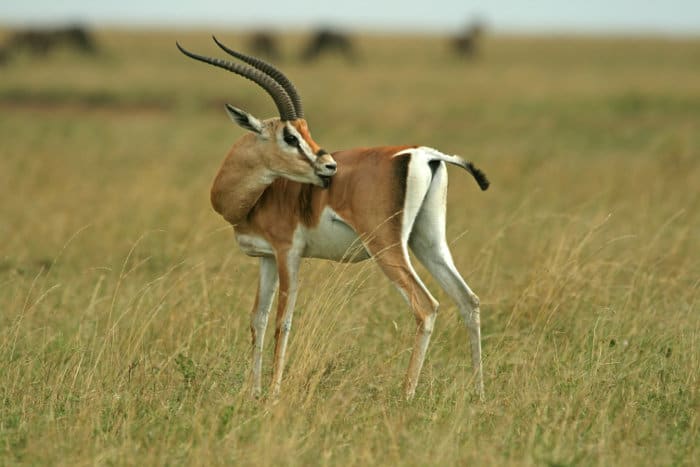 There are two fool-proof ways to identify Grant’s gazelle: their face and their tuchus. Many species of buck have white markings on their back legs and rumps. Grant’s gazelle is unique because the coloring extends above and around the tail. Thus, giving the impression that it’s wearing pants!

Their second identifier is beautifully contrasting black and white facial contours. These run along the full length of the face. The black facial stripe runs over their eyes, ending in a cateye-like tail just after the end of the eyelid. The white stripe sits directly above it in beautifully stark contrast. 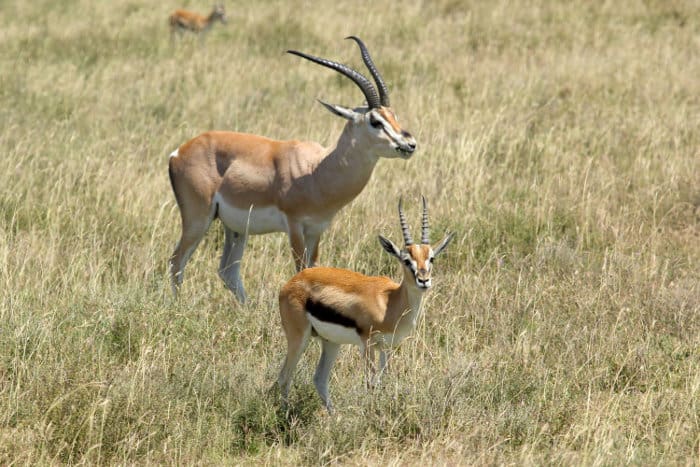 Thomson’s gazelle is a closely related species that is often confused with Grant’s gazelle. While it’s forgivable to confuse the two without prior knowledge, there are plenty of differentiating factors between the two species.

It’s hard to tell the size difference between these two types of gazelle in pictures. When seen together, however, it’s easy to distinguish Grant’s gazelle by its large size and long legs.

Both are similarly clad in a pale tan coat with white underbellies. The Thomson’s gazelle is usually distinguishable by a consistent, thick black stripe on its flanks.

Grant’s gazelle sometimes shares this stripe, although it varies in color and isn’t as thick. Apart from Grant’s usually being paler, coloring isn’t the best differentiating feature.

Both have ringed, pointed horns. However, unlike the stout, v-shaped horns of Thomson’s gazelle, Grant’s gazelle have longer, thicker, and lyre-shaped horns.

Both species of antelope have similar black and white facial markings. This includes a beautiful highlight of white along the length of their brows down to their noses.

Grant’s beautiful flicker of black behind its eye marks the difference to Thomson’s gazelles’, which has a thicker black stripe that stops at the base of their eyes.

Finally, it also doesn’t wear pants: its white bottom stops beneath its tail. This is more similar to someone unfortunate enough to sit in paint. 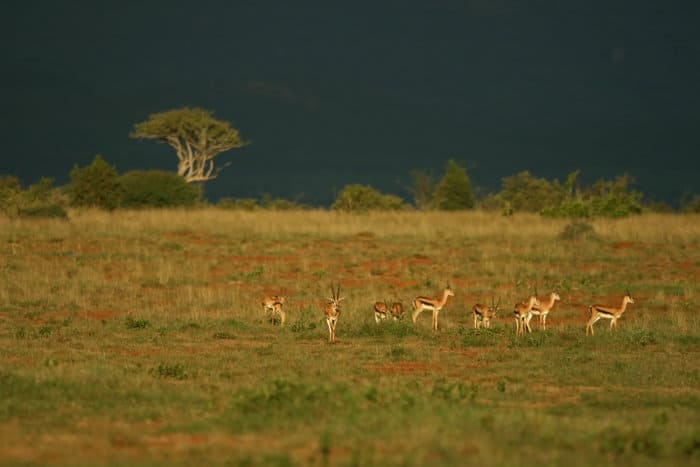 Natural predators of Grant’s gazelle include smaller predators such as cheetahs, wild dogs, and black-backed jackals. Yet humans surpass these predators in their threat to the species, mainly in the form of poaching. As well as encroaching farmlands which disrupt their territories and migratory patterns.

Although their current population is not officially on record, they are vulnerable to habitat loss and overhunting. This is unfortunate because they are beautiful and graceful, alongside their clever adaptations and feminine ferocity.

Want to witness Grant’s gazelle and other African animals in their natural splendor? Start planning your dream wildlife safari with our exceptional safari-curating service. 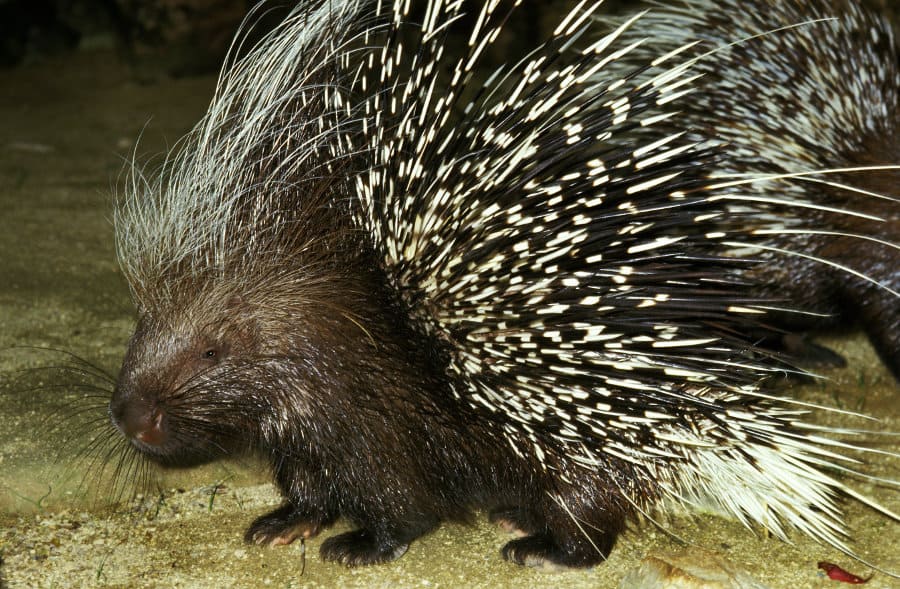