The pangolin is probably the most unfortunate animal you’ve ever heard of. It currently reigns supreme as the most trafficked animal on the planet!

Not only is the pangolin misunderstood and used regularly in traditional medicine, most people think this beautiful mammal is a reptile!

The scaly anteater’s body parts are sold in China and Vietnam as a delicacy, or are used for their mythical healing properties.

Pangolins are now classified as endangered and under protection of international law. Yet poaching continues to be rife.

In celebration of these magnificent and needlessly endangered creatures, here is a detailed guide to the pangolin and its many secrets, with 26 fun pangolin facts.

What is a Pangolin? 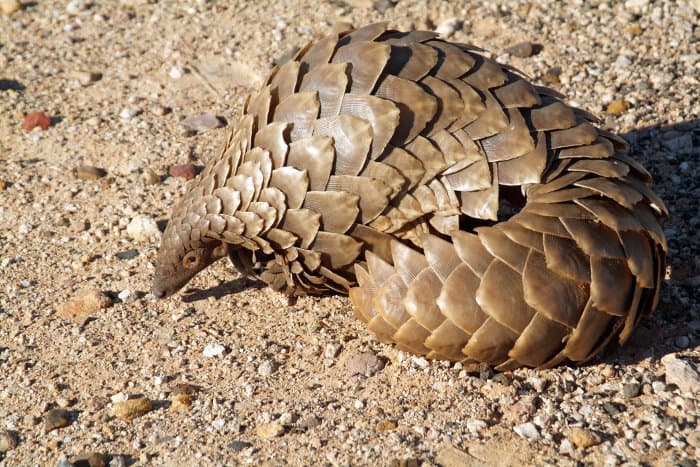 Pangolins look like reptiles. They have scales and scurry across the ground looking for insects. Anyone can be forgiven for believing they are reptiles.

However, pangolins are mammals. They are the only mammal species completely covered in scales. These scales are used for protection against the many predators of the African savannah.

Pangolins can grow to over one metre in length. They can tip the scales at an impressive 18 kg, although 10-15 kg is standard for both males and females.

They are slow animals. Usually a pangolin will roam around on all fours, at a speed not much faster than a tortoise. But they can stand on two feet and run as well, with their long tail used as a support. 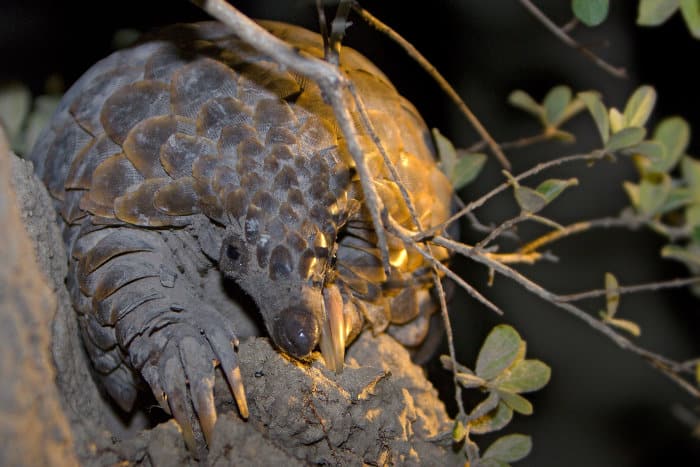 How fast is a running pangolin? Only 5 km per hour!

Unfortunately, photos cannot fully reflect how big these animals can be. Encounter a pangolin and it feels like you are back in the Jurassic age, watching a prehistoric giant crawl across the ground.

A pangolin’s hard overlapping scales are actually made of keratin, which is the same substance found in our nails and hair. These scales continue to grow throughout a pangolin’s life and account for 20% of its weight.

You may know about keratin. It is the same substance found in rhino horn and is the reason behind so much senseless animal poaching and killing.

Where can you see a pangolin in the wild?

There are eight pangolin species, of which four are found in Africa and four in Southeast Asia. All of these species are under threat due to trafficking.

The African ground pangolin is completely terrestrial, while the African tree pangolin uses its claws and prehensile tail to move up and down trees.

Pangolins survive all across Sub-Saharan Africa and are one of very few species that populate both the Congo Basin and Southern African savannah. You can find pangolins everywhere from Sierra Leone to Chad and Mozambique.

Unfortunately, these nocturnal creatures are not readily seen. Pangolins are very shy creatures and have proved very difficult for researchers to study. You could easily live in an area populated by pangolins, and not see one in an entire lifetime. 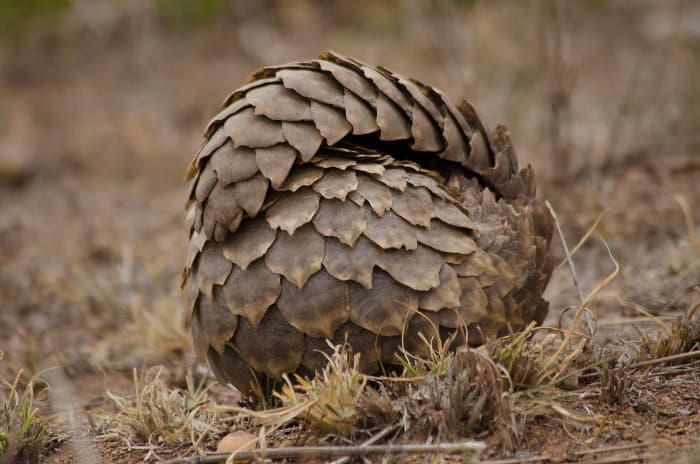 What makes a pangolin so special?

The pangolin is one of the world’s most adapted creatures. For starters, it is a mammal with scales! Here are some interesting pangolin facts.

1. The pangolin does not have teeth but uses a thick, strong and sticky tongue to catch its food. How do they chew without teeth? Easy. Pangolins happily eat up sand and dirt with their insect meals, then use the grainy sand to break down their food.

2. When extended, the pangolin’s tongue is longer than its head and body. It is attached at its pelvis and last pair of ribs, and mostly stored away in its chest cavity. Just think about that for a moment – imagine having a tongue longer than your head and body! 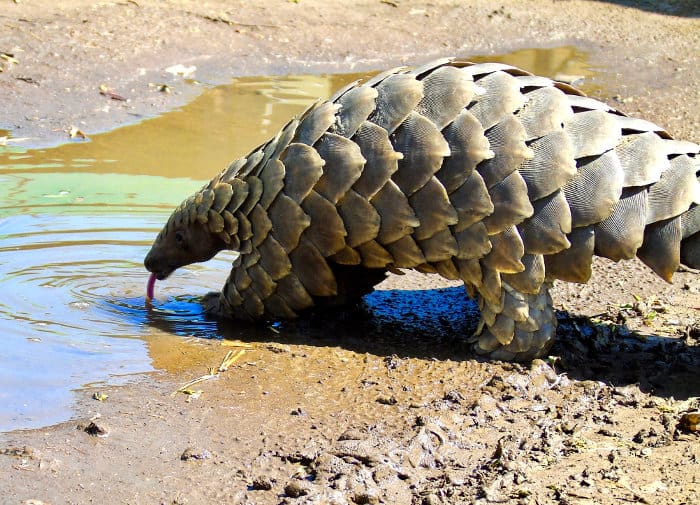 3. Pangolin stomachs have keratinous spines. These help the mammal ingest small stones, which in turn help to mash and grind insects. This stone crushing stomach is similar to a bird’s gizzard.

4. When threatened pangolins curl up into a tight ball. In this way they use their scales as a protective coating. 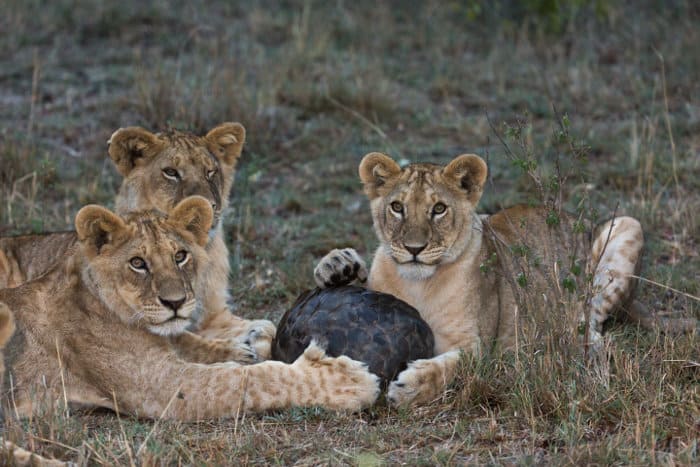 5. If predators get too close, a pangolin has a very neat and nauseating defence. They emit a noxious acid from glands near the anus, which can literally paralyse their prey.

6. If a spray of noxious gas isn’t enough, pangolins can lash out at their predators with their razor sharp scales. This two-pronged defence keeps the pangolin safe from lions, but unfortunately not from poachers and hunters.

What Do Pangolins Do All Day? 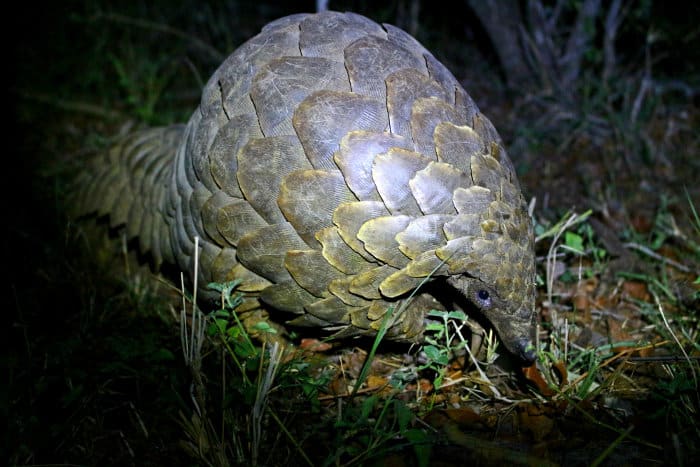 Pangolins are nocturnal animals. They do nothing for most of the day. But when night falls they head out on the African savannah, searching for food. So what do they do? Here are some more fascinating pangolin facts.

7. While pangolins appear to be like anteaters, armadillos and sloths, they are more closely related to other African carnivores. Their nocturnal hunting and secretive lifestyle isn’t dissimilar to small predatory cats such as caracals.

8. Adult pangolins are like little hermits, preferring to live a solitary life rather than in pairs or families. Such a reclusive lifestyle makes them almost impossible to follow and study. 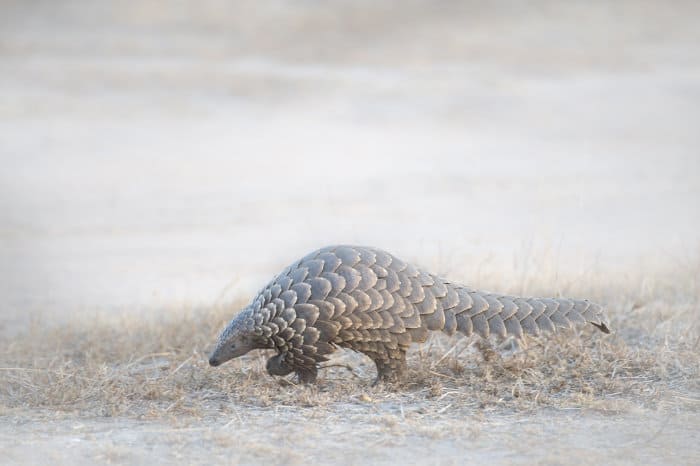 9. Pangolins are entirely insectivorous, meaning they live exclusively on insects. In a single night these anteaters will enjoy 90 one-minute feeding sessions, mostly at termite tunnels. It is estimated that they can eat up to 70 million insects a year!

10. Pangolins are actually incredibly picky eaters and only eat 19 species of insect. Their favourite food is formicid ants, along with certain termites and larvae. 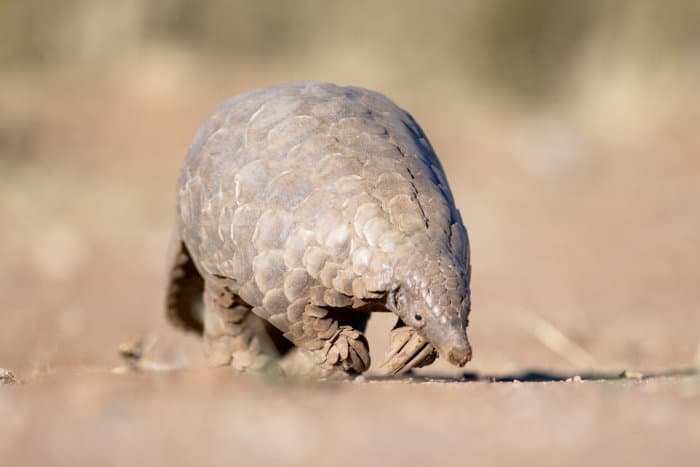 11. It isn’t easy burrowing beneath the ground for insects, with poisonous creatures scurrying all around. So pangolins have special muscles for sealing their ears and nostrils shut, so ants don’t accidentally burrow their way inside. Unique mouth muscles prevent ants and termites escaping after they have been captured.

12. Researchers remain clueless as to how old these animals can live in the wild. Pangolins in captivity have lived for 20 years, but captivity and the wild are two very different places to live.

How Do Pangolins Produce the Next Generation? 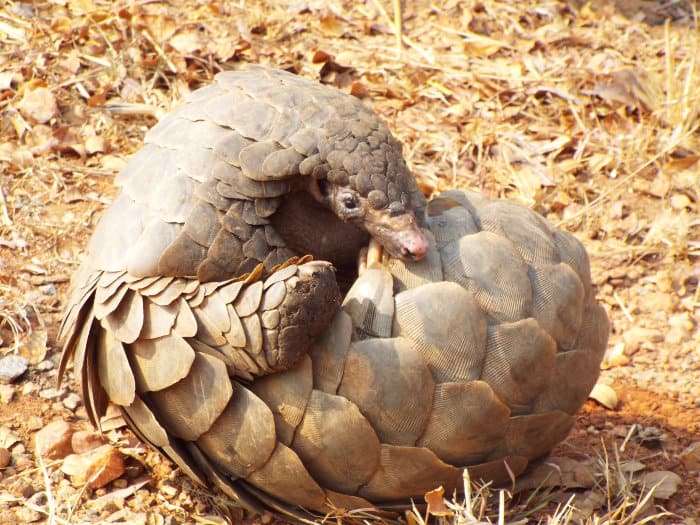 Uncontrolled trafficking is always terrible for an animal population. The pangolin plight is made worse by less than abundant breeding. Check out these pangolin facts.

13. Pangolins are solitary and only socialise when looking for a mate. A couple pairs together for just one or two days, usually at the same time each year.

For example, Cape pangolins breed every March. However, because pangolins are not very social they can struggle to pair up, meaning individuals don’t breed every year.

14. It is tricky for such a strange animal to actually have sex, with their razor sharp scales clattering around. The male forces his tail beneath the female to keep her in position. Even so, breeding is not always successful.

15. Cape pangolins and tree pangolins give birth to a single young after 139 days. However, the Indian pangolin has a gestation period of only 65 days. 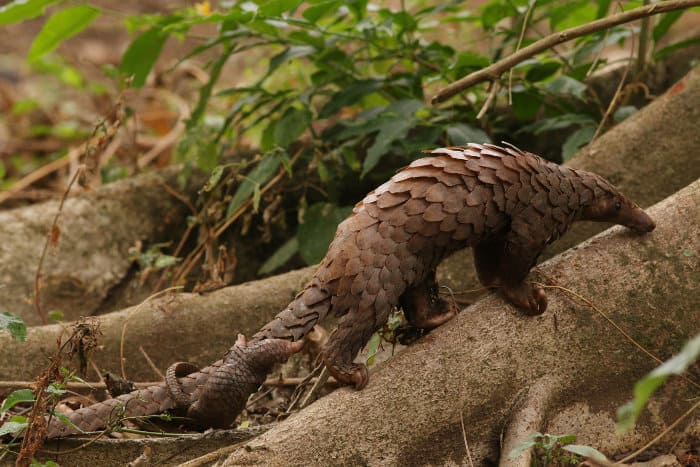 On rare occasions mother gives birth to twins. More than two young has only been recorded twice in the wild. Most small mammals give birth to many young at once, but with pangolins there is only one offspring to nurture into the world.

16. Mother pangolins keep their young in burrows until they are old enough to explore. The mother curls up snugly around the baby pangolin at night, or if she senses danger.

17. Remember, pangolins are mammals, meaning the young nurse on milk. This continues for three to four months, although the young pangolin can hunt for ants after just one month.

18. When a pangolin is ready for the wild it takes a ride on its mother’s tail! How cool is that?

Most mammals tuck their young into their bosom, but baby pangolins ride around on a scaly tail. When in danger the baby will slip under its mother’s tail and be protected within her body.

Why are Pangolins the World’s Most Trafficked Animal? 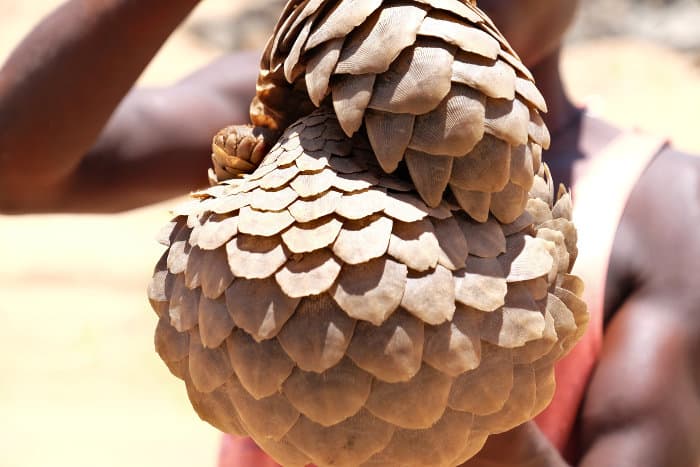 All eight pangolin species are under threat. Four are classified as vulnerable, two are endangered, and two are critically endangered. Yet these animals were once as widespread and abundant as springbok. So what has happened?

Here are some rather sad facts about the world’s most trafficked animal.

19. Between 2011 and 2013, it is estimated that over 200,000 pangolins were poached. This number is based on actual seizures and experts believe that only 10% of poached pangolins are known to authorities.

20. Pangolins are protected under international law. In 2016, 183 governments signed an agreement to end the legal pangolin trade. Hopefully this ban has come quick enough for the Malayan pangolin, which has seen an 80% population decline in just 20 years.

21. Unfortunately, pangolins are still very attractive to poachers. Rolling into a ball and shooting poisonous liquid is a good defence against predatory cats. But it makes them incredibly easy prey for hunters.

22. Pangolin scales are made from keratin. Just like rhino horn the scales have no medicinal property. However, the price of pangolin scales has multiplied ten times in the last five years! 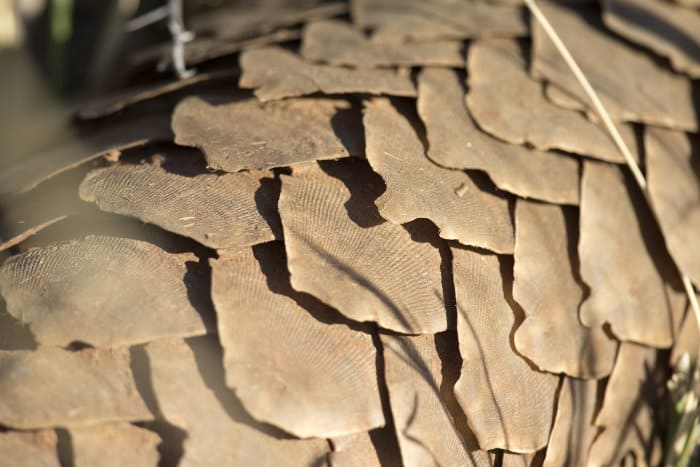 23. The problem facing these peculiar anteaters is that pangolin scales are a revered ingredient in traditional medicine, especially in China and Vietnam, where they are believed to cure illnesses from asthma to cancer.

24. Some African cultures also use the scales in folk remedies. They are widely considered a way to neutralise evil spirits and witchcraft. Smoke created by burning pangolin scales is used for warding off lions, curing nose bleeds, and a good luck charm to improve cattle health!

25. Pangolin sightings are rare. In parts of Central Africa a pangolin sighting is considered a precursor to drought. The only way to prevent the drought is to kill the pangolin! While these beliefs seem strange and cruel they have persisted for many many centuries.

Killing one or two pangolin isn’t a problem. The challenge in the 21st century is demand. These animals are not being killed for some local belief, but massacred on mass and trafficked around the world.

26. Rhinos are poached for their horn and the carcasses are left for vultures. Pangolin meat is considered a delicacy.

Is that a good thing?

At least the entire animal is being used.

But it makes the animal even more attractive to poachers, as they can sell the scales and meat to different markets. 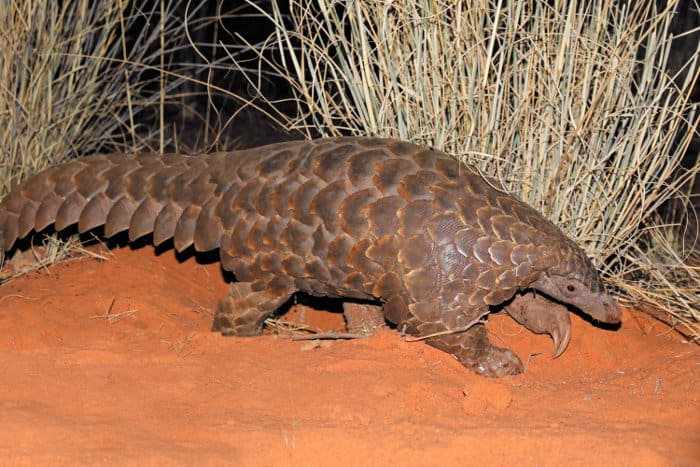 To finish off this guide to pangolins let’s remember that there are eight different species that need support and protection. Let’s hope the future becomes much brighter and pangolins are no longer the world’s most trafficked animal.