What is a gemsbok? The gemsbok is a majestic straight-horned antelope capable of surviving in some of the harshest and driest environments.

It has striking features and stands out in the arid and typically flat areas where it lives. The animal’s aggressive behaviour, when threatened by predators, can occasionally result in the death of the attacker.

Discover more about the striking Oryx gazella’s appearance, diet, and habitat below. 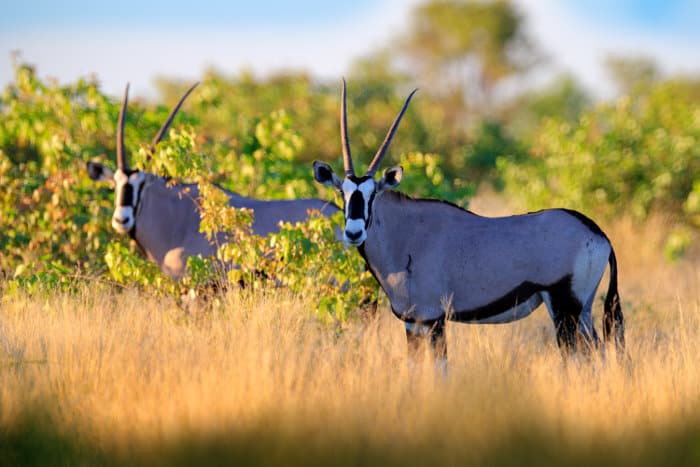 What does oryx stand for? The term oryx comes from the Greek word for a type of antelope. The genus includes the gemsbok, Arabian oryx, Scimitar oryx, and East African oryx.

Oryx gazella is the scientific name for gemsbok, the largest of the four species. The name ‘gemsbok’ is Afrikaans, pronounced ‘gems-bock’. Afrikaans is a South African language with Khoisan, Malaysian, French, Dutch, English, and German roots.

Gemsbok are large African antelope with a light brownish-grey to tan colour. They have lighter patches of hair towards their hind legs. Black markings extend from the base of the horns and sweep across the face over the eyes and cheeks. Black continues down the neck and around the underbody, banding around each leg.

A stripe runs from the tail up the spine to form a thick black mane. Each leg has a black marking on the front, while the lower portions of the legs, muzzle, and underbelly are white. Gemsbok have large hooves, allowing them to walk across sand dunes.

Adults grow to heights of between 115 cm and 125 cm measured to the shoulder, and lengths of 180 cm to 195 cm. They have thick muscular necks covered in inelastic skin. The gemsbok’s tail can measure from 45 cm to 90 cm long. 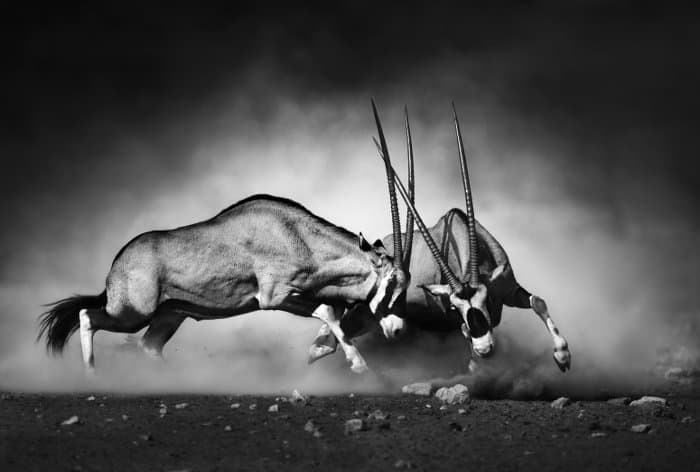 A gemsbok’s horns are spear-like and typically measure between 83 cm and 122 cm on both males and females. The species is widely hunted for its spectacular horns, with males having thicker horns with larger bases. Females tend to have slightly longer, thinner horns.

The gemsbok’s horns are not only attractive, but they are functional too. Females use their horns to defend against predators and protect their offspring. Males primarily use horns in defense of their territory against other males. The horns can be lethal, with records of even lions coming off second best.

Are Gemsbok and Oryx the Same?

The endangered East African oryx, Oryx beisa, inhabits Eastern Africa, while the closely related gemsbok, Oryx gazella, inhabits Southern Africa. Oryx beisa has two subspecies; the common beisa oryx (O. b. beisa) and the fringe-eared oryx (O. b. callotis). Both animals were once considered as a subspecies of the gemsbok.

An average genetic divergence of 40% between the East African oryx and the gemsbok supports their classification into two different species.

Interesting Information About the Majestic Gemsbok

Living in a harsh environment has contributed to the allure of the gemsbok. Discover the unique ways this oryx animal survives below.

What do gemsbok eat? 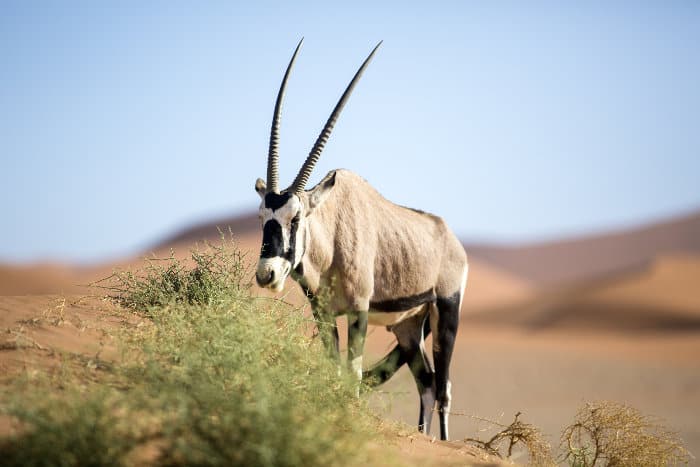 As a herbivore, a gemsbok’s diet includes grass, roots, bulbs, wild melons, and cucumbers. Its diet contains enough water to maintain it during a drought. The gemsbok’s metabolism extracts as much moisture as possible from its food.

Gemsbok graze in the late afternoon and at night when the condensation and moisture content of the plants is at its highest. In the dry season, gemsbok change to browsing when the grass is sparse. During particularly dry periods, they dig up to a meter deep in search of tubers and roots.

Where do gemsbok live?

In southern Africa, you can expect to see gemsbok in nature reserves and private reserves in Botswana, South Africa, Namibia, and Zimbabwe.

The majestic gemsbok is able to survive in hot climates by ensuring the temperature of the blood circulating to the brain stays below the body temperature.

Another mechanism for survival is the animal’s tendency not to sweat when dehydrated.

The gemsbok’s urine is highly concentrated, and its feces is almost dry, helping to conserve the moisture in its body.

The gemsbok is a nomadic animal, however, herds can remain year-round in areas with watering holes. Due to its natural habitat being hot it is usually inactive and facing away from the sun during the highest temperatures of the day. 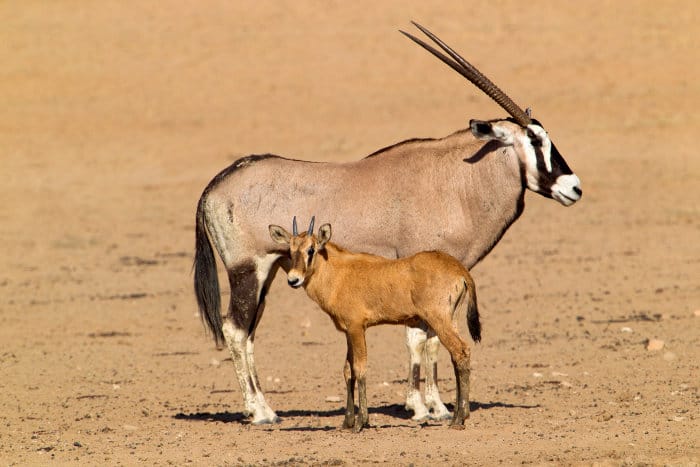 Pregnant females normally leave the herd before giving birth to one or two calves. The newborn remains hidden in the general vicinity while the mother returns to nurse the calf 2 to 3 times in the day.

Newborn gemsbok remain apart from the herd for a period of 6 weeks. After rejoining the herd, the calf gets weaned from its mother around 3.5 months and finds its independence from 4.5 months old.

Newborn gemsbok antelope weigh between 9 and 15 kg at birth. Similar to most bovids, a young calf is capable of standing shortly after birth and is soon able to follow its mother. When born, they are entirely brown in colour and only develop the characteristic markings from 3.5 months old.

Like most male antelope, the gemsbok is not reported to participate directly in parental care, leaving the mother to feed, shelter, protect, and groom the young.

Male and female oryx gazella reach sexual maturity at 1.5 – 2 years of age. Once sexually mature, the female gemsbok can procreate and give birth after an 8.5 month gestation period.

While they don’t have a specific breeding season, the young in a herd tend to be of a similar age due to females of the same herd occasionally ovulating at the same time. The majority of gemsbok give birth between August and September.

Gemsbok live to the impressive age of 18 – 20 years in the wild.

Gemsbok typically stay in herds of 10 – 50. A single male dominates the herd, which also typically includes a dominant female.

The male leads the group from the rear while the dominant female takes up the foremost position. In large groups there may be a second-ranked beta male. Herds are typically female-based and consist of a few non-dominant males.

Herds are semi-closed to strangers. The males in a group tend to accept other males into the herd after displaying a little aggression.

They move in mixed herds, nursery herds, or as a solitary individual (usually a territorial male). The gemsbok is polygynous, with one male mating with multiple receptive females within the herd. Mature males are typically solitary and find mates from the mixed or nursery herds passing through his territory.

Their ability to survive within small areas of semi-arid or arid savanna allows them to occupy smaller annual ranges than migratory species like the blue wildebeest and red hartebeest.

Gemsbok have excellent hearing and sense of smell. They communicate vocally, through displays of dominance, scent glands, and urine. When a male is protective of its territory it can behave aggressively. A male gemsbok smells a female’s scent and urine to determine her fertility.

Natural Predators of the Gemsbok Animal 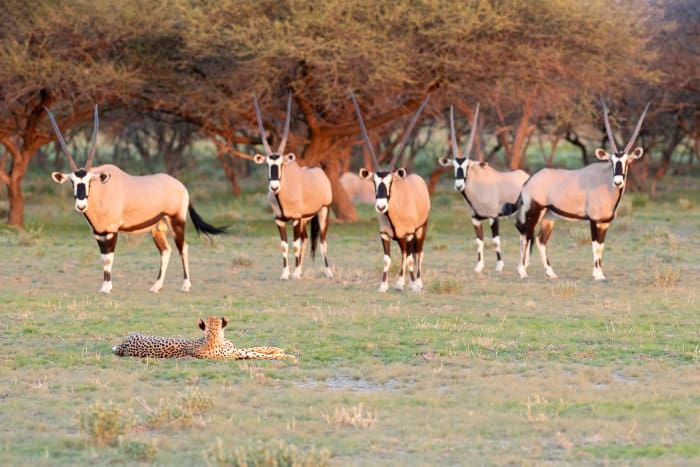 Many of Africa’s top predators like lions, leopards, cheetahs, spotted hyenas, and wild dogs prey upon adults and calves. Calves are particularly susceptible to predation, contributing to their high mortality rate. Hyena and wild dogs are most likely to kill gemsbok calves.

Humans occasionally hunt gemsbok for their thick skin, horns, and as a source of food. They also face the threat of habitat loss and the overgrazing of food sources by livestock.

Is the Gemsbok Endangered?

The gemsbok is not endangered and appears on the International Union for Conservation of Nature’s red list of threatened species as ‘least concern’. The species is numerous and widespread with populations considered stable or even increasing.

In the last 20 years, the species was successfully reintroduced into various private and protected areas. The gemsbok’s high value as a trophy animal should ensure its numbers on private land will continue to increase. 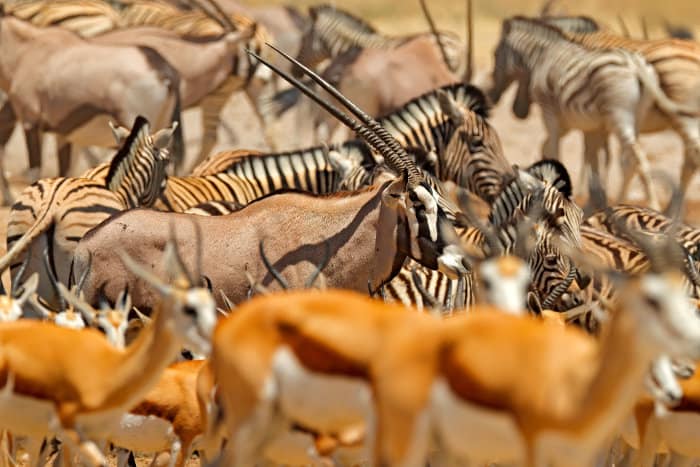 Set Off on a Safari to See Gemsbok

This large antelope, superbly adapted to arid areas, is an incredible sighting during a game drive. Its striking facial markings and long, straight horns will likely remain in your memory for many years.

Spot the majestic gemsbok during an African safari in Botswana, Namibia, South Africa, and Zimbabwe.