You know about the Big Five animals in Africa – lion, leopard, elephant, rhino, and buffalo. But are you familiar with the Big Six birds? They are: the kori bustard, martial eagle, lappet-faced vulture, Pel’s fishing owl, southern ground hornbill, and the subject of this article, the saddle-billed stork.

Contrary to popular myth, storks don’t deliver babies. They’re quite ill-equipped to do so, come to think of it. Even the saddle-billed stork, with its colourful presentation, strong, thick bill and long legs just doesn’t seem to be the baby-delivering type.

Sure, it’s big. And it’s kind of shy, often seen as a loner or at best in a pair. Besides… the saddle-billed stork is a meat-eater, so you probably wouldn’t want to entrust a baby to it. Let’s take a look at some facts about these amazing, long-legged, beautiful carnivorous birds.

Adaptation is the Key to Their Success 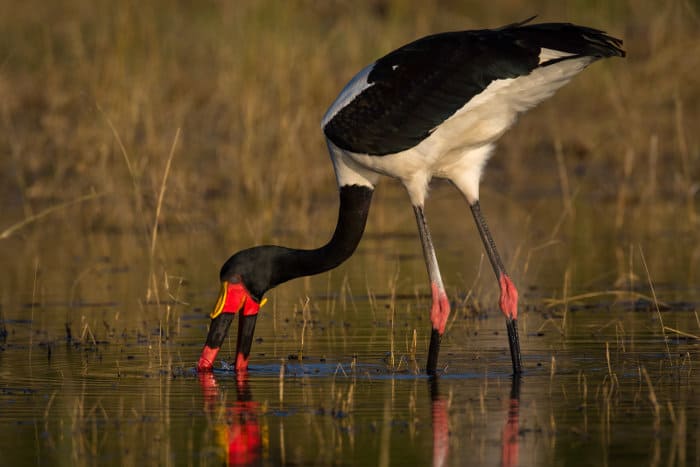 Storks have long legs. They’re not just for beauty. It helps them be successful in their endeavours in at least a couple of ways.

First, they can wade through fairly deep water looking for food. Seeing a long-legged water bird like a saddle-billed stork gracefully move through the shallows of a lake or river is a beautiful thing. Their long bills then assist in getting down deep into the water to get at the morsels.

Another great advantage to long legs is the ability to look over reeds and plants. They want to spot African predators from a distance, and height helps. It’s especially useful when they are protecting a nest or younglings.

It’s not an exaggeration to say that this particular species of stork may be the most beautiful. A saddle-billed stork’s body is white, and it has black feathers on its wings, with white primary and secondary feathers decorating the wings too.

There’s also a small red patch on its chest as if to mark where its heart is (it doesn’t). Interestingly, it changes colours, though. In the breeding season, it may go darker.

The splash of colour is on the beak. It is bright red with a striking black stripe in the middle. There’s a yellow section on top called a saddle, which adds to a tropical look for the bird. The saddle drops around towards wattles hanging from the face.

The legs are black, with red joints and red feet.

They Have a Carnivore’s Diet 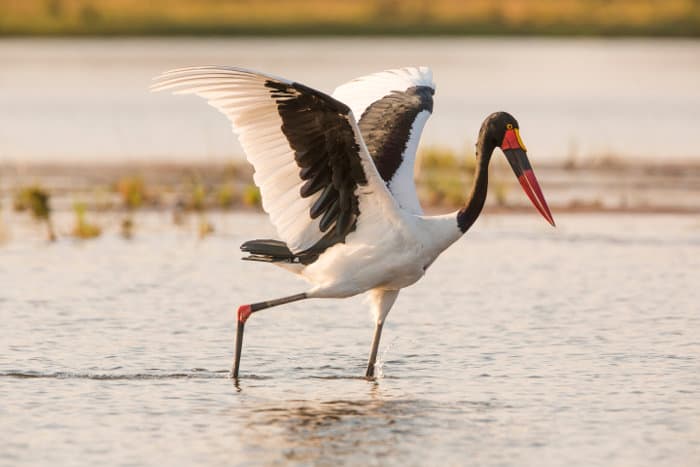 Any fish in the general vicinity of a saddle-billed stork needs to be on alert. Storks prefer to dine out on fish and small crustacea in general, though they’ll also take frogs, large insects and even other small birds! To clarify: they prefer birds’ eggs, although, sometimes the eggs actually have premature birds in them.

Depending on the particular habitat, catfish is popular on the saddle-billed stork menu, and smaller reptiles like waterborne lizards aren’t safe, either.

Storks do employ a particularly interesting method for finding and eating fish. They use their long beaks to stir up the water, which kicks up mud and silt. When they eventually capture a fish, you might observe them actually cleaning it before eating. Clean bird!

Don’t underestimate the size of this gorgeous fowl. It grows to a staggering 1.5 m tall. And it’s almost as long. As mentioned, males can weigh up to 7 kg, while females are slightly smaller (mass-wise) at 5 kg.

It’s a leggy bird at almost 40 cm leg length. And the beak can grow to more than 35 cm! Its wings reach an impressive 2.5 m on average – sometimes more. 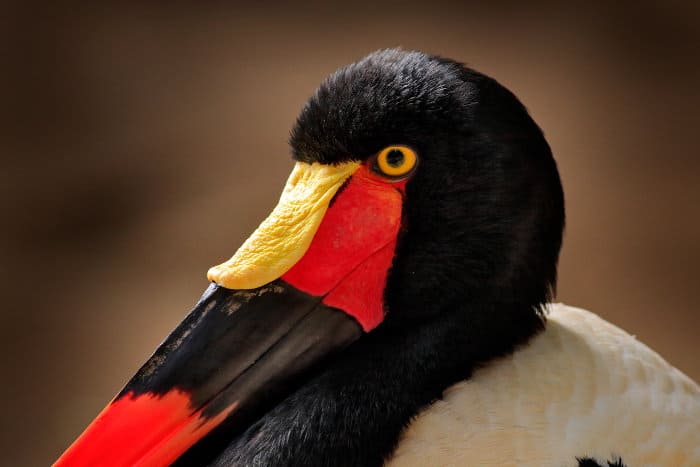 Male saddle-billed storks are slightly larger than females. However, the best way to tell the difference is by looking at their eyes. Females have yellow eyes, while males have dark brown eyes and small yellow wattles at the bill’s base.

There’s no guarantee you’ll get that close, to be honest, but it’s good to know anyway, right?

Where to Find Saddle-Billed Storks

The stork is common and found fairly widely in Africa. Extending outwards from the middle of the continent, they live in the east of the continent, as far as Ethiopia, as far south as South Africa, and westwards in several other countries.

As long as there’s a fairly reliable water source, you have a good chance of spotting a saddle-billed stork in these regions. Individuals also seldom move, unless they run out of food or water in a particular area.

They like to live in open wetland spaces, and will sometimes nest in an area with more trees, provided it’s near the water.

You’ve got a particularly great chance of seeing these beauties on a Uganda safari and in the Northern Cape in South Africa. 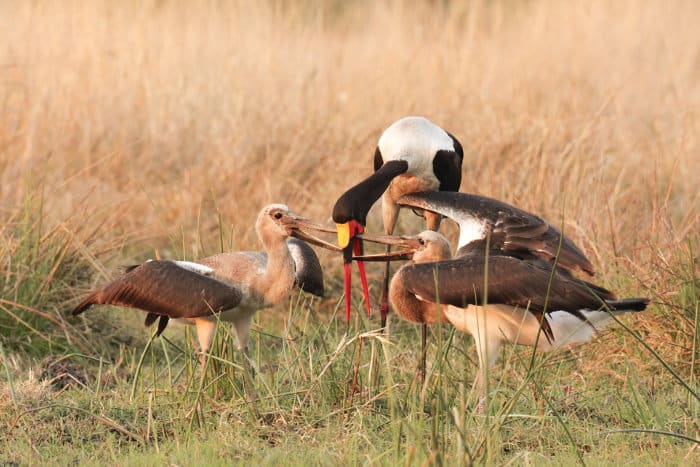 When you’re on safari, a guide will often pause and make you listen. They can tell you which bird you’re hearing, and often, whether the bird is in an agitated or panicked state. Here’s the thing with this stork: you will seldom hear one at all, because there is no saddle-billed stork call.

Storks generally make very little noise. The only time they may emit a sound is when they are close to their nests. That sound is the clattering of their bills. The stork makes no sounds like other birds because it does not have a syrinx. They are, technically, mute.

Chicks in a nest do not chirp for food, because of this. They hiss. You are unlikely to hear this above the cacophony of other sounds in the wild. Consider yourself lucky when you do.

There have been some wild stories about saddle-billed storks seen in groups of up to 10. This is a rare phenomenon (it does happen from time to time). This stork likes to be alone. Or at most, with its partner. By the way, stork pairs are monogamous and will usually pair for life.

If trees are in an area close to water, saddle-billed storks avoid opportunistic predators by nesting in the high branches. They typically breed in the dry season.

The Saddle-Billed Stork is Under Threat 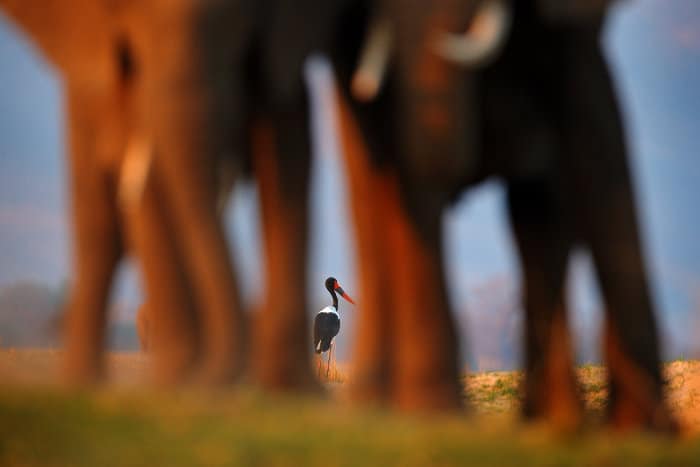 There is a slightly contentious issue around whether the saddle-billed stork remains endangered. The existence of the stork in South Africa is threatened and it’s officially classified as endangered.

However, in some other countries, the populations have been at least stable. They are not specifically hunted or predated upon. They displace when the wetlands become destroyed or polluted.

Thankfully, many regions are now classified as reserves or protected lands, which helps. It does however, not account for climate fluctuations and the resulting loss of water sources.

In areas where the damage to the habitat is man-made, it’s usually due to unrestricted use of pesticides and chemicals, farming, and urbanisation.

Saddle-Billed Stork Lifespan and Their Young

The breeding patterns and cycles of the saddle-billed stork are interesting. Males and females build the nest together in tall trees that are close to water. Nests are quite big and made of mud and grass. A breeding pair will use the same nest every year, adding bits to repair it every season.

Finding a suitable spot is sometimes challenging. The nest is large, and the trees need to be strong in the upper branches to accommodate this. A nest is also rebuilt and reused season after season.

A female lays one to five eggs in a given cycle – usually, it’s two or three. Both adults incubate the eggs. After a month, the eggs hatch. Both parents continue the cooperation by taking turns to feed the hatchlings, which are white when born. The chicks will be fledgelings by at most 100 days.

By this time, their feathers will be changing colour to a more conventional stork pattern. The young birds hang around close to their parents for a year or two. A healthy saddle-billed stork can live up to 30 years. 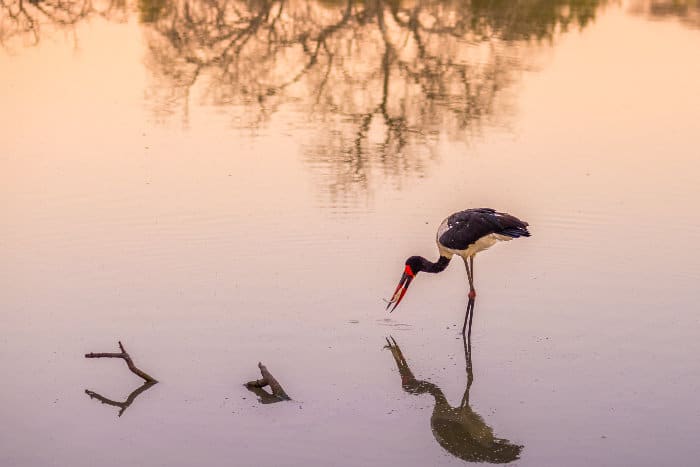 Various species of storks have played a significant role in ancient cultural folklore. For example, in Egypt, storks represented the soul.

In Greece, the goddess Hera cursed both Gerana and Antigone, turning them into storks. The story goes that Gerana tried to kidnap Hera’s baby. Some historians believe this may be a distant origin of the connection between storks and babies.

Of course, in modern Western mythology, the stork delivers the baby, instead of kidnapping it.

Stalk a Stork on a Safari

Saddle-billed storks are beautiful birds. It’s hard not to gaze in wonder at their unusual looks. Hopefully, these additional facts make them even more fascinating to you. Like many of Africa’s finest creations, they are well worth seeing in their natural habitats.

If you’d like to see them, there’s no better way than on a wildlife safari. You can book one specifically to try to encounter these birds and other incredible animals. Click here to find out more.