The “Big Five” is probably the most popular phrase in the African safari jargon. More often than not, the first thing a safari newbie will tell you is : “I want to see the big 5”. Almost as if it was the only thing “worthwhile” in the bush.

Or people will return from a safari saying “I saw the big five”!

While this is the most popular term in the safari industry, it has a bitter history and makes the savannah seem a very simple place.

So what makes them so “special”? And are they even the biggest?

What’s wrong with the big five?

Why don’t we find out…

So what are the big five animals? 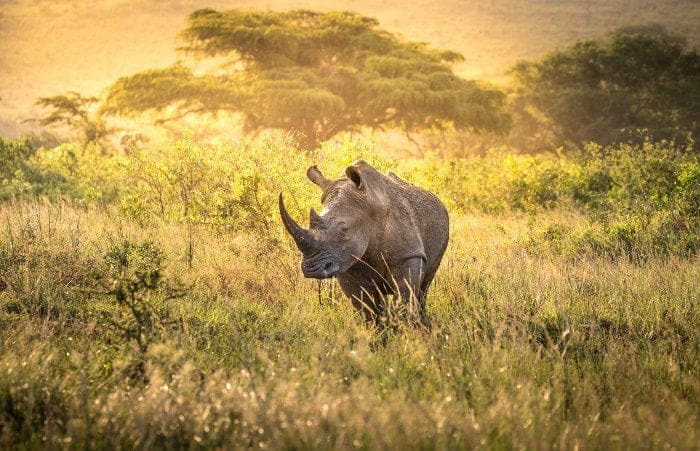 And no: they’re not defined as “big” because of their size. Otherwise, creatures such as the hippopotamus or giraffe would have made it in the list.

Why are they called the big five?

Historically, the big five got their fame because they were the most sought-after hunting trophies. And not just because their heads appeared most impressive after a visit to the taxidermist.

Simply put, the big five were the most dangerous African animals to hunt on foot. They’re very difficult to maneuver around and are highly unpredictable.

Most importantly, these five are the only animals that charge and fight back against guns.

So as colonialists and aristocrats went around Africa with their gangs of servants, killing all five became the ultimate African hunting experience (even though the servants got killed first when an animal charged).

Why is there still a big five today? 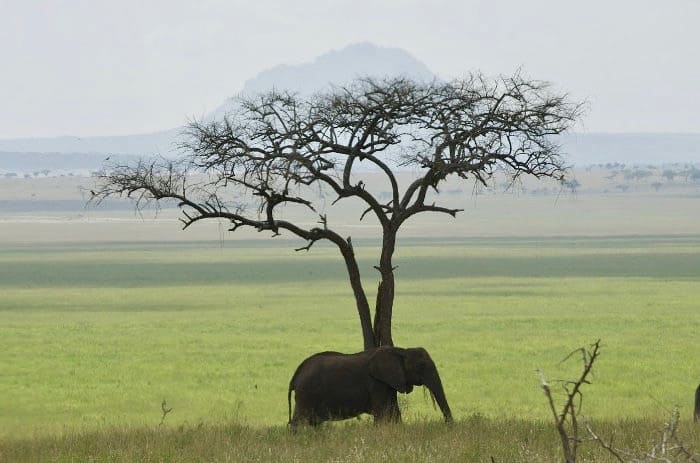 Many people don’t know about that history. They just hear the words safari and big five. The term is idolised as much as ever today, just for different reasons. Put simply – the big five sell safaris.

Today, the term is extensively used in safari promotions and marketing. Expressions such as “Big 5 country”, or “Home to the Big 5” have become common practice to attract tourists.

As the number of private game reserves has increased in the last 20 years, the big five is being used more and more.

It’s got to such an extent that people tend to ONLY want to see the Big 5, while often times neglecting Mother Nature’s other hidden treasures.

It’s a pity as there’s far more to safari than just five animals.

How the big five simplifies the safari experience

If it’s your first safari then it’s difficult to escape the desire to tick these five animals off your list. Almost everyone wants to say they went to Africa and saw the big five.

But what does that actually mean? That you glimpsed a leopard or rhino from 50 metres away?

Almost all private game reserves claim to have the big five. However, they might only have two elephants, one rhino, one lion pride, a leopard that is never seen and a small buffalo herd.

In comparison, most of Africa’s BEST safari destinations DO NOT have the big five.

You can only spot four of the five in Serengeti or Masai Mara, but there are over 1 million wildebeest and zebra.

The Okavango Delta doesn’t have them all, nor Samburu, Tarangire or South Luangwa, Hwange, and many of Africa’s best destinations.

Thinking beyond the big five

The best safari experiences can’t be planned. If you are only interested in five then you’ll miss out on most of what makes Africa so special.

Safari is about surprise, about intimate moments witnessed just by you, scenes of both drama and charm that carry you away.

Such as cheetah chasing impala across the savannah, loved-up zebra couples grooming each other, or lions meeting hippos at a waterhole.

The big five can be captured in photos. But the best part of a safari will be your personal moments with the animal kingdom.

That’s not a distant glimpse of a sleeping cat but coming face to face with thousands of wildebeest. Seeing a rhino in the distance may sound exciting to some, yet it’s nothing to following hyena or wild dogs on a hunt. 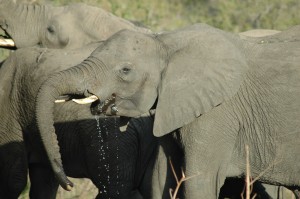 In my opinion one of the most beautiful animals on Earth. It is heavy (up to 6000 kg), yet fast enough to outrun most people (> 40 km/h at full charge). Unless you’re Usain Bolt. 🙂

African elephants are incredibly intelligent creatures and have amazing memory capabilities. They are unmistakable with their imposing long nose (trunk), their precious “jewels” (tusks) and enlarged ears.

Did you notice they had ears of the shape of the African continent? 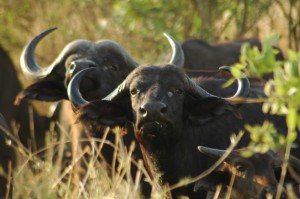 The most dangerous of them all, extremely feared by hunters. Buffaloes are approached easily when in large herds, but solitary bulls can be quite tricky to handle. Better left alone. 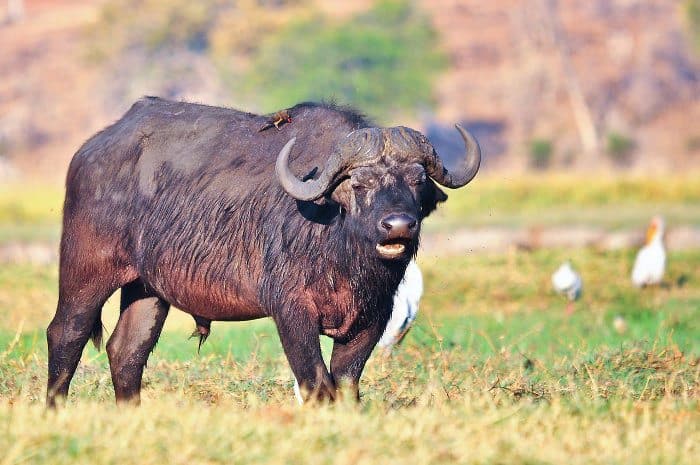 The African buffalo can weigh up to 1000 kg and is one of Simba’s favourite steaks! 🙂 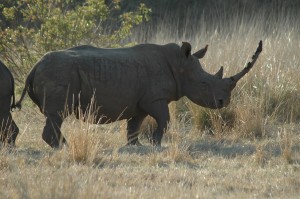 There are two types of rhinos in Africa: the black rhino with its distinctive prehensile lip (which makes it a browser), and the white rhino (not white at all), a typical grazer.

Rhinos are also heavy creatures, weighing between 1000 kg (for the black species) and up to 2000 kg (white rhino). As with elephants, rhinos are widely poached for their horn. 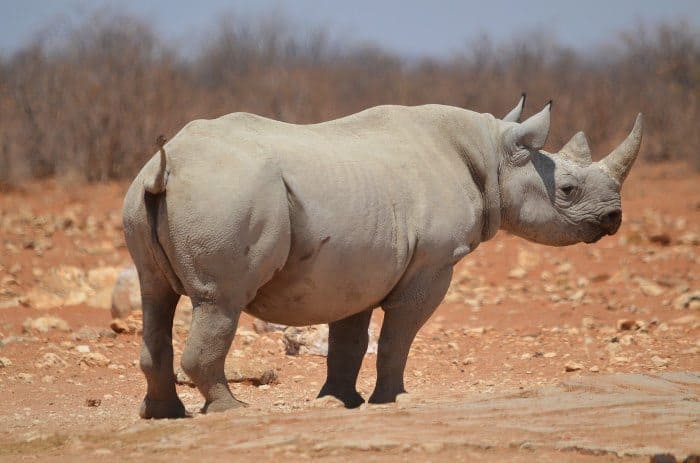 Horns are taken away as trophies – to make knife handles for instance – or are sometimes used in powders (as an “aphrodisiac”). Many Chinese people believe rhino horn has various medicinal purposes, though this is complete nonsense. 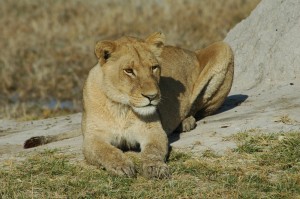 Africa’s “King of the Jungle”. An animal of rare beauty, undoubtedly the most famous of them all.

It is a skillful hunter with incredible power and speed. Its eyesight is like no other, and it also has an excellent hearing and sense of smell. Male lions are very recognizable with their long and imposing mane. 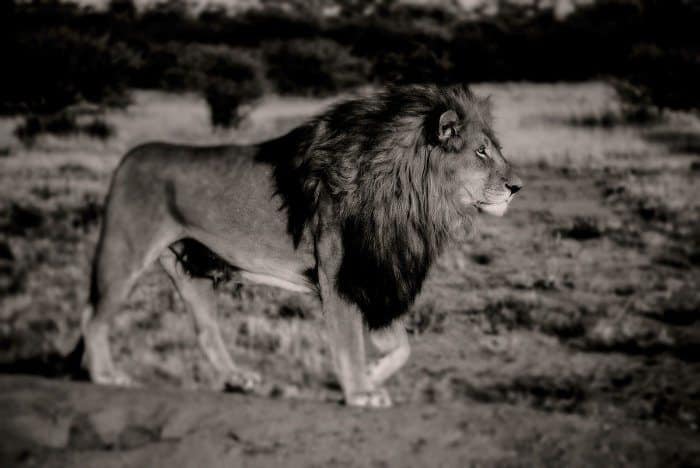 Lions are also highly social animals. In the lion family, male lions eat first, yet it is the females that do “most” (if not all) the chasing and hunting.

Once the male has satisfied its appetite, the females join the feast, whilst cubs have to content themselves with any leftover. 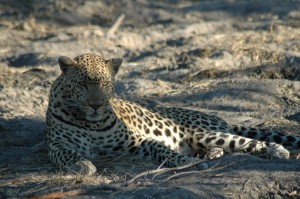 Did you know that not a single leopard spot is exactly the same?

In fact, many biologists use spot patterns on their face and neck to identify them from one another. To be honest I wouldn’t be able to tell the difference. Well, perhaps I’d need a LOT of practice! 😉 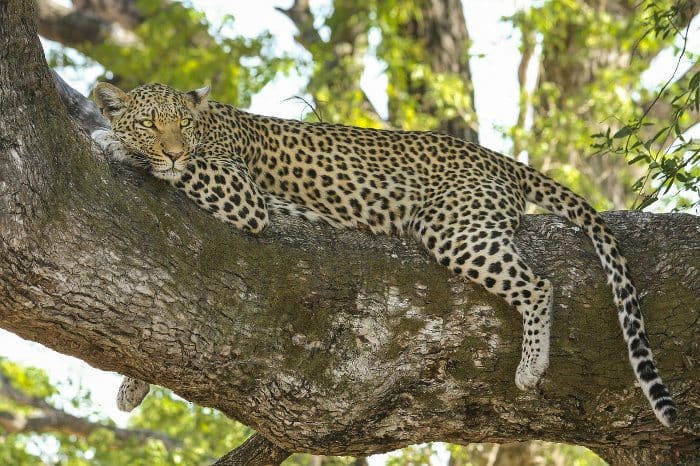 While on a safari it is always my top animal on the checklist. It has all the characteristics I love: it is graceful, is an expert climber and has extraordinary hunting capabilities.

It is also very solitary and shy, which makes it even more rewarding when “spotted”.

An absolute treat for the eyes.

There is no denying that the hunter’s relic is a marketer’s masterpiece. Alternative catchphrases don’t spring to mind – so while the big five is an outdated concept in one sense, it remains essential to the safari industry.

When choosing a safari destination our recommendation is to evoke the origins of the word “safari” instead. This is a Swahili word meaning “long journey”.

A long journey implies something unpredictable, moving the expectation away from five animals to a personal experience in the wild. After all, who wants the same five photos as everybody else?

By viewing safari as a journey, rather than a “hunt” to see the big five, you can celebrate the individuality of the experience and destination. You’ll make an African safari a subjective experience rather than an objective fact.

When you’re researching destinations here are some considerations to make.