Why are flamingos pink? If you’ve ever seen a ‘flamboyance’ of flamingos gathered together, you might be wondering where their characteristic colour comes from.

These beautiful wading birds are unmistakable, and their signature pink feathers are a big reason for this. Yet, you might be surprised to hear that flamingos are not born pink.

So, how did they get their iconic appearance?

Well, the flamingo’s diet is responsible, but there’s a lot more to it than that. Find out why flamingos are pink, along with many other fun flamingo facts, below.

Flamingo Diet: You Are What You Eat 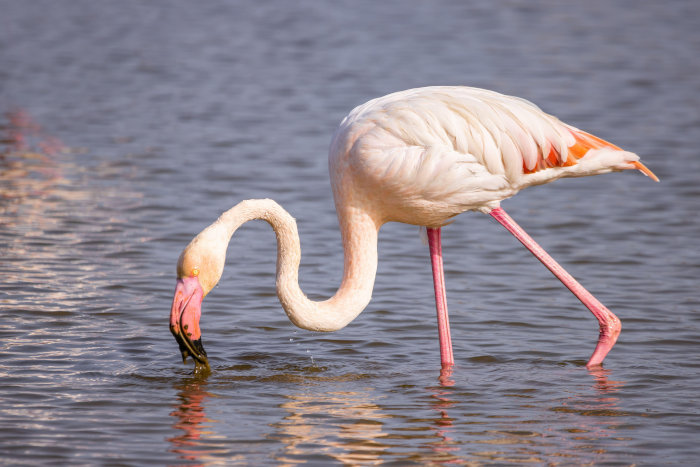 As mentioned, flamingos are not born pink-young birds and are actually a dull grey colour. They turn pink because of their diet, which has high levels of pigments called carotenoids.

Flamingos are omnivorous, feeding on algae, brine shrimp, and other small invertebrates. These are full of a red-orange pigment called beta-carotene, which gives the birds their famous pink feathers.

It’s not just their feathers, either. Their skin, fat, mucous membranes, and even egg yolks are all stained pink or similar colours.

Apart from their fabulous feathers, flamingo beaks are perhaps their most striking feature. Why? Well, they’re upside down for a start, making the birds look like they’re perpetually frowning.

However, there’s a good reason why they should turn that frown upside down. The flamingo’s bendy beak, while odd-looking, is perfectly suited to its filter-feeding lifestyle.

If you’re wondering how flamingos eat, then the answer is also upside down.

The birds curve their long necks and bend over the water, then swish their beaks about. Sometimes they’ll even stamp their feet in the shallows to stir up shrimp and other invertebrates.

Their jaws are also essentially reversed compared to most birds. The lower jaw is larger and more powerful, while the upper jaw is smaller and moves up and down during feeding.

Their beak has further adaptations to aid filter-feeding, including hairy structures called lamellae that line their jaws.

Once they’ve consumed the food, they need to metabolise it. Carotenoids are toxic to most animals, but flamingos have a specialised metabolism that helps them process these chemicals.

Their livers then break down the carotenoids into functional components and pigments. They’re no longer harmful, simply adding a splash of colour to their plumage. 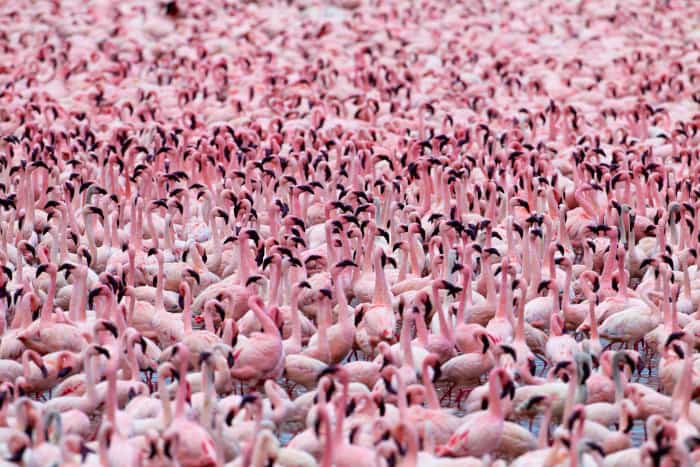 First of all, what are flamingos? They’re wading birds in the family Phoenicopteridae, and the only living members of the order Phoenicopteriformes.

That probably doesn’t mean much. Essentially, there’s nothing quite like flamingos.

Scientists traditionally believed they were related to other long-legged birds like storks, spoonbills, and ibises. Recent studies have suggested they may be more closely related to grebes.

If you’re wondering what the flamingo’s name means, it’s actually very fitting. It comes from the Spanish or Portuguese flamengo, which means “flame-coloured”. 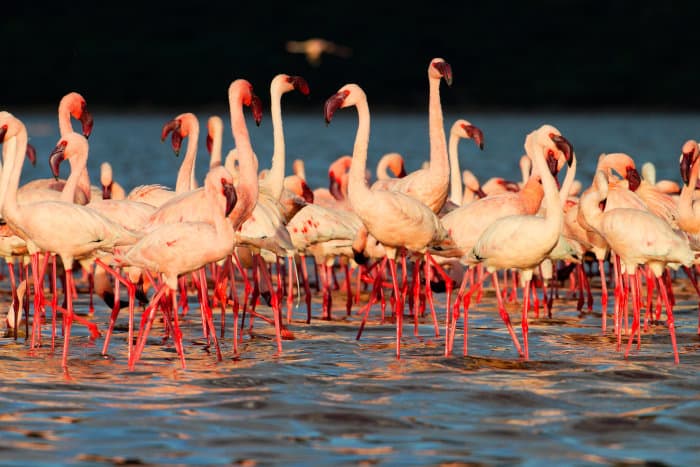 There are 6 flamingo species in all, and between them, they live in Africa, the Americas, Asia, and Europe.

Two of the six species live in Africa. These are the greater flamingo and the lesser flamingo.

Greater flamingos, as the name suggests, are much larger than lesser flamingos. They’re a pale pinkish-white colour, with a splash of red and black on their wings.

Lesser flamingos also have pink feathers, while their wingtips and much of the underside of their wings are black. 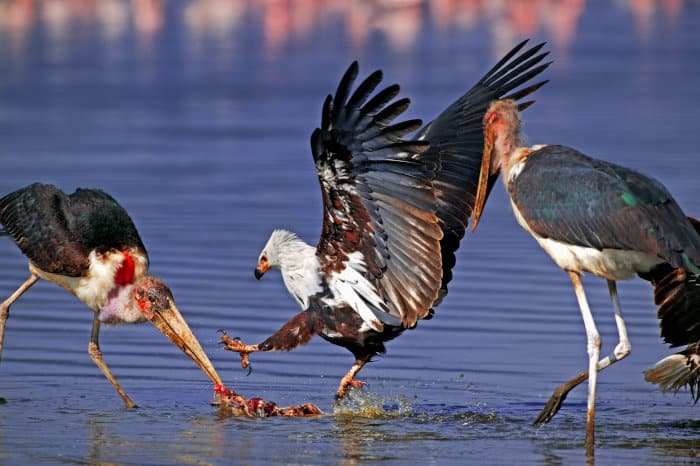 Flamingos are social birds, living in colonies often numbering thousands of individuals. This is the definition of ‘safety in numbers’, helping the birds keep an eye out for threats.

Adult flamingos don’t have many predators, though big cats, wild dogs, hyenas, and large raptors occasionally prey on them. Flamingo chicks are more at risk and are often predated by birds like gulls and storks.

Flamingo Courtship – How Do Flamingos Choose Their Mates? 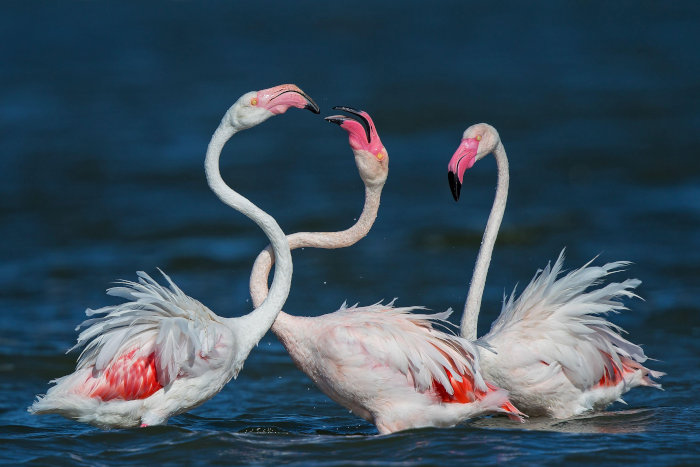 With so many mates to choose from, flamingos need to do something to stand out from the crowd.

One of the best ways is to show off their moves, with the flamingos doing a spot of flamenco to win over potential partners. Flamingo courtship is an elaborate affair, with the birds displaying a series of dances.

The birds even apply a kind of ‘make-up’ during mating season. They produce oil from tail glands, then spread this onto their wings while preening. The carotenoid-rich oil enhances their vibrant plumage.

Flamingos are monogamous, staying with the same partner over the breeding season. That doesn’t mean they mate for life; they’ll often move on to a new partner each year.

No they are not fighting. This is one of the most amazing thing in nature. Parent flamingos produce crop milk in their digestive tracts & regurgitate it to feed young ones. See how together they are doing it. Source: Science Channel. pic.twitter.com/GrJr4irGox

That took a sinister turn.

It’s easy to see why some people think so: there’s footage of flamingo parents feeding their offspring a suspicious bright red liquid.

This is a case of mistaken identity, and it all comes back to those carotenoids in the flamingo’s diet.

The red liquid isn’t blood, but crop milk, and the parent is regurgitating a nutritious meal for its chick.

Most birds have a crop, a portion of the alimentary tract where food is stored before digestion. Only some birds feed their young crop milk, however. As well as flamingos, all pigeons and doves do it.

Flamingo crop milk is a bit different from most species’. Like their feathers, the birds’ milk is stained by the pigment beta-carotene, giving it a bright red colour.

After giving away so much crop milk, the parents start to lose their own pink hue! They soon get back their characteristic colour once their offspring move on to solid food.

Can Flamingos Be Other Colours? 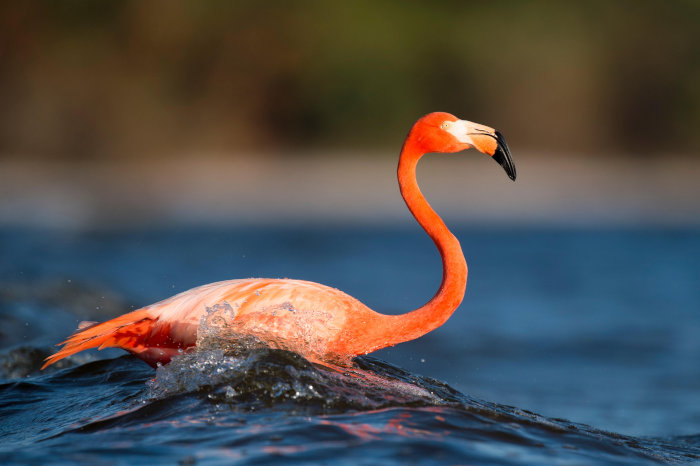 We’ve already heard one reason parent flamingos can get paler. That’s not the only reason, either.

Since flamingos’ pink feathers are down to carotenoid consumption, it makes sense that colour varies.

Whether it’s different species, different individuals, or even the same bird at different times, flamingos can be a range of different colours.

Some species are pinker than others. This is based on food availability, and therefore the amount of beta-carotene they consume.

The American flamingo has perhaps the most vibrant colouration, with bright reddish-pink feathers.

How Tall Are Flamingos?

Graceful and long-legged, the largest flamingo species are among the tallest birds in the world.

Among the six species, there’s some variation in height. Africa has both the tallest and the shortest flamingos.

Added to its striking colour and unusual appearance, there’s no wonder this bird sticks out. 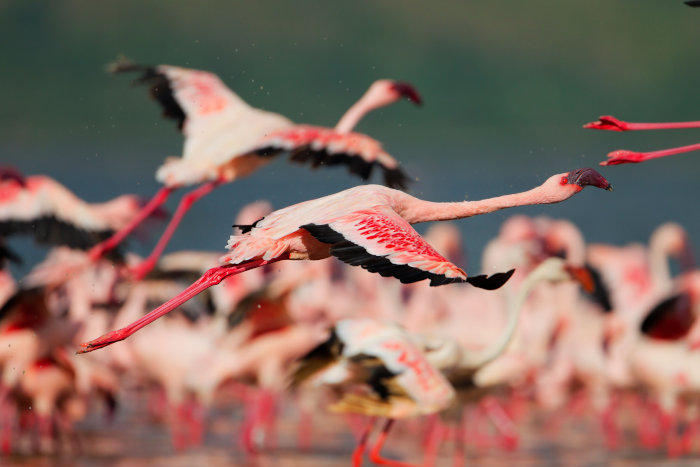 Africa is also home to the world’s largest bird, the ostrich. Ostriches are far too large and heavy to fly, so is the flamingo a fellow flightless bird?

While flamingos are large birds, they’re still easily small and light enough to fly. Even though they’re very tall, most of a flamingo’s height is its long, thin legs and neck. In fact, the greater flamingo weighs just 2-4 kg.

Once in the air, flamingos are strong flyers. They average 35 mph (56 km/h) and have been spotted at altitudes of over 4.5 km!

Getting airborne isn’t so simple. Just like most planes, flamingos need to gain speed before take-off. And for that, they need a runway.

Can flamingos walk on water? 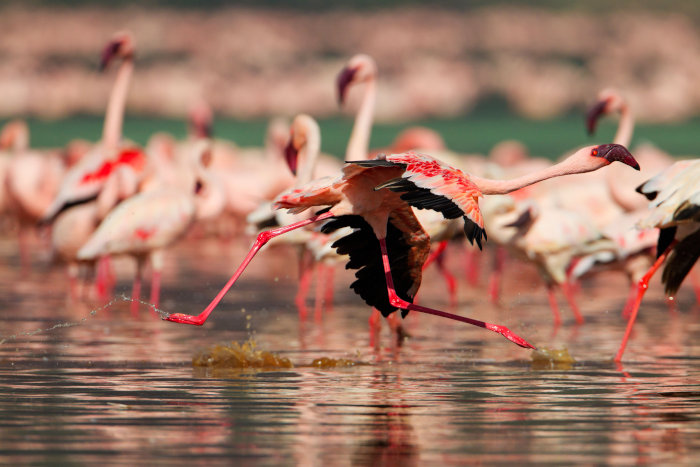 Often, flamingos take off from the water itself. This spectacle has made some people wonder whether flamingos can walk on water.

First, they flap their wings vigorously. Then, they take several steps on the surface of the water, building up enough speed to take off.

It’s not technically walking on water, but it looks like it.

Why Do Flamingos Stand on One Leg?

Almost as famous as flamingos’ pink plumage is their fondness for balancing on one leg. But the main reason why flamingos stand on one leg is still debated.

The original theory was that they do it to maintain body heat. While they mostly live in warm climates, standing in water all the time can get chilly.

An experiment at the Philadelphia zoo found that they stood on one leg more often when the temperature was colder.

Others believe it’s to avoid muscular fatigue. Flamingos have a locking mechanism in their ligaments and tendons, meaning they have more stability – and save more energy – on one leg.

They’re far from the only birds to do this, but they are the most noticeable.

Where to See Pink Flamingos 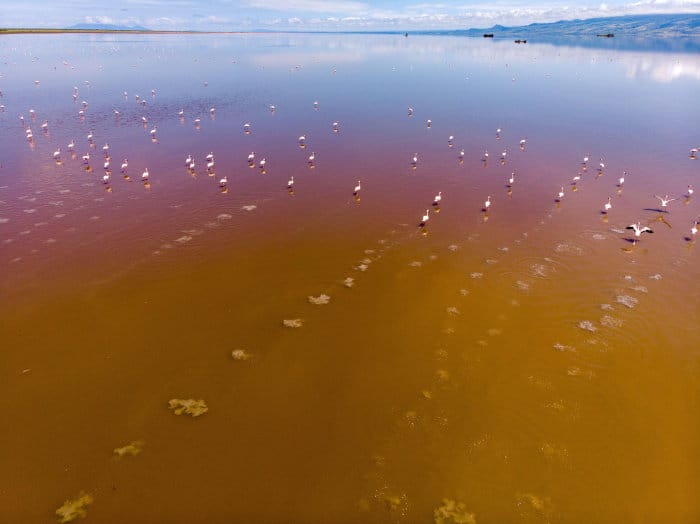 If you want to see flamingos in Africa, you can find them in many parts of the continent. In certain spots they congregate in their millions, making for a spectacular sight.

Both African flamingo species can be found in several of the alkaline ‘soda lakes’ of the Great Rift Valley. Lake Natron, up north of the Ngorongoro district in Tanzania, is the best place to see lesser flamingos and is their main breeding area in East Africa.

Plan your dream safari here, and you’ll be able to answer anyone who asks: “why are flamingos pink?”