When it comes to the jaguar vs leopard discussion, it’s easy to get confused between these two admirable animals.

Leopards and jaguars are legends of the animal kingdom that are very difficult to tell apart.

They are wild cat members of the Panthera genus, along with lions and tigers. These are the only animals capable of making a roar and are the most fearsome predators in the wild.

It’s very difficult to tell them apart because they are never seen in the same place – except in zoos, and that doesn’t count.

So you need to look at many subtle differences.

Below are the top 15 differences that will help you understand jaguar vs leopard.

Leopard and Jaguar: Differences & Similarities Between the Two

If you’re on a safari in Africa asking the question, “is that a leopard or a jaguar”, here are a few facts to help you distinguish between the two.

1. Where do leopards and jaguars live?

The easiest way to tell the jaguar leopard difference is to think about where you are.

Leopards are native to Africa and parts of the Middle East and Asia. You can find the vast majority of this population in East and Southern Africa. 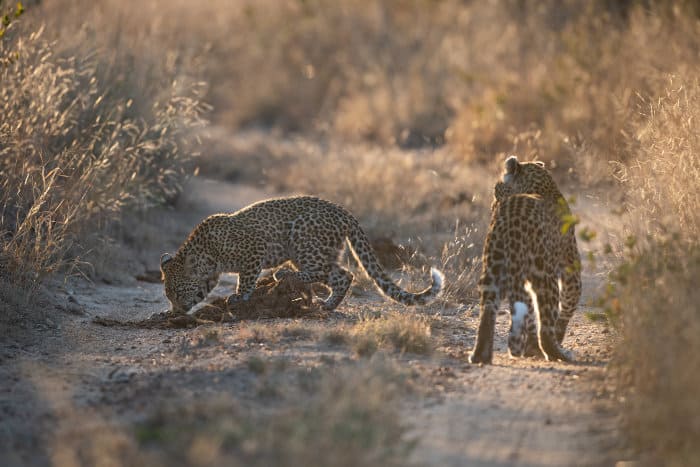 You can only find wild jaguars in South and Central America, with most of the population residing in the Amazon. 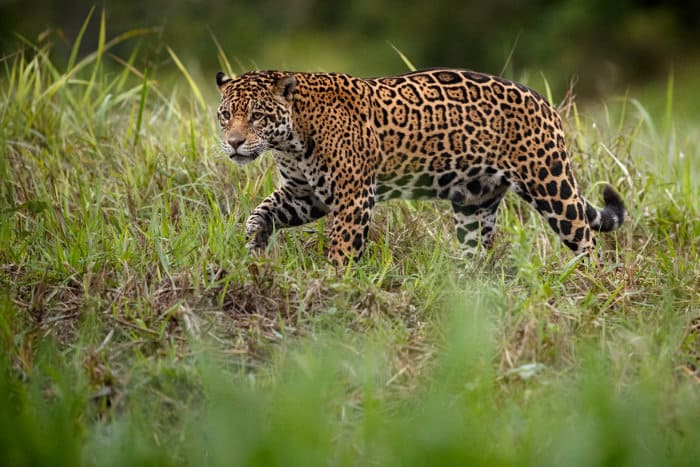 Of course, you could see both in a zoo. But who wants to see captive animals when you can admire them in the wild!

At first glance, it’s almost impossible to tell the difference between jaguar spots and leopard spots.

Both have a beautiful rosette pattern that’s quite distinct from a cheetah’s solid black spots. 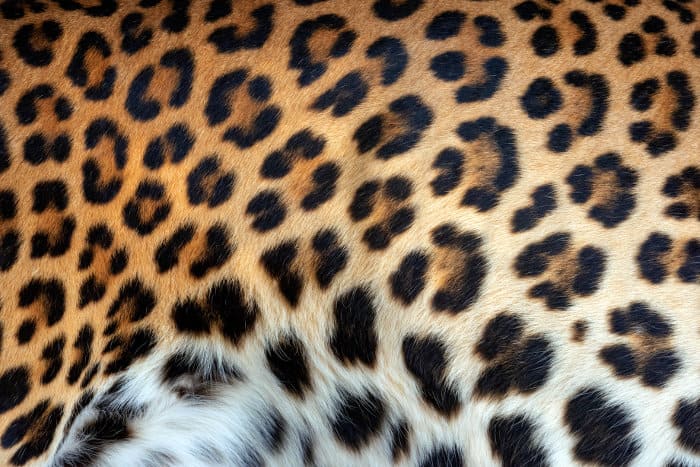 Jaguar rosettes are larger, and inside these rosettes, there is a central black spot. 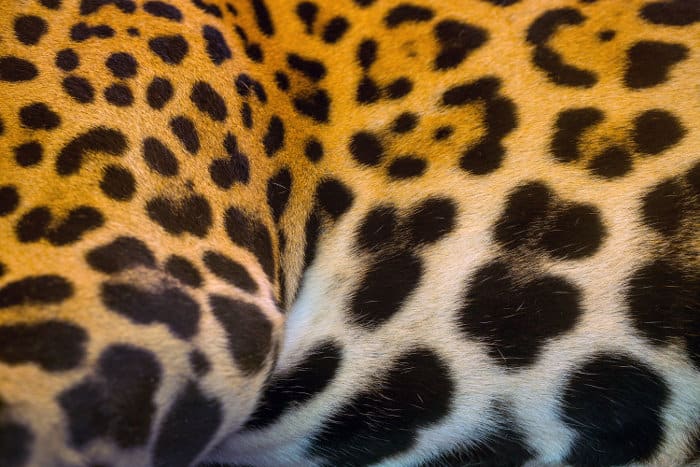 Both species are sexually dimorphic, which means that the females are smaller and lighter. For jaguars, this difference is only 10%. However, female leopards can be up to 30% lighter than males.

Leopards and jaguars are virtually the same height, with the average South American cat just a couple of centimeters taller than an African leopard at the shoulder.

4. The difference between leopard and jaguar body shape

Body shape is the easiest trick when comparing jaguar vs leopard.

Jaguars are stocky animals with broad shoulder muscles and a robust build. They have short and compact bodies. 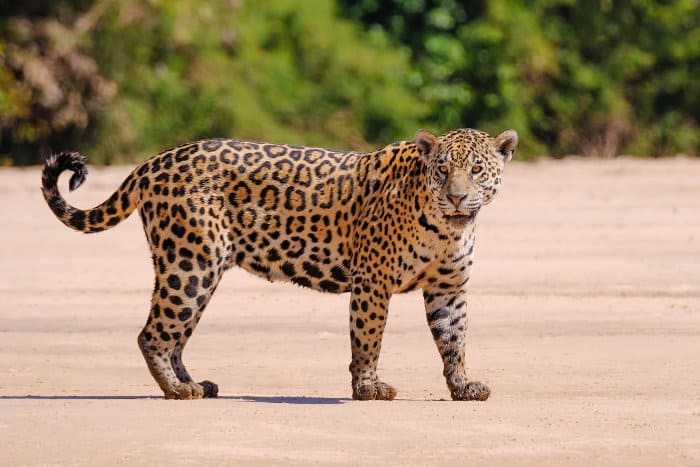 Leopards have longer, more slender bodies. So despite weighing less, leopards are longer than their South American cousins. 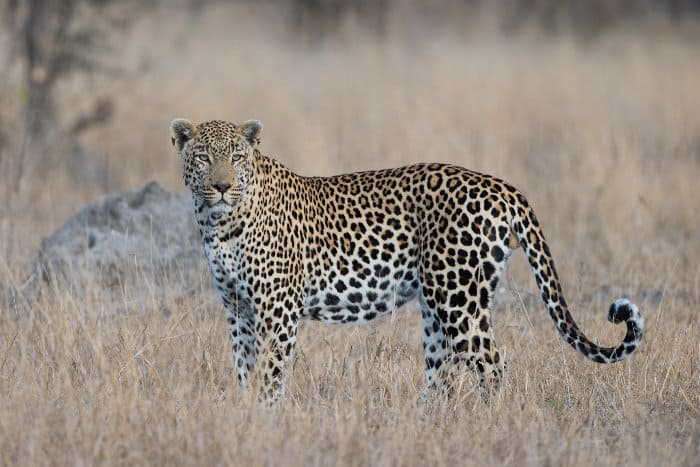 5. The difference between jaguar and leopard tails

If body shape isn’t enough to tell them apart, then look at the tail.

Jaguars have short tails to match their stocky bodies.

6. What’s the difference between a jaguar and a leopard head shape?

Leopards are good-looking. They have small angular heads with sharp cheekbones and clearly defined lines. 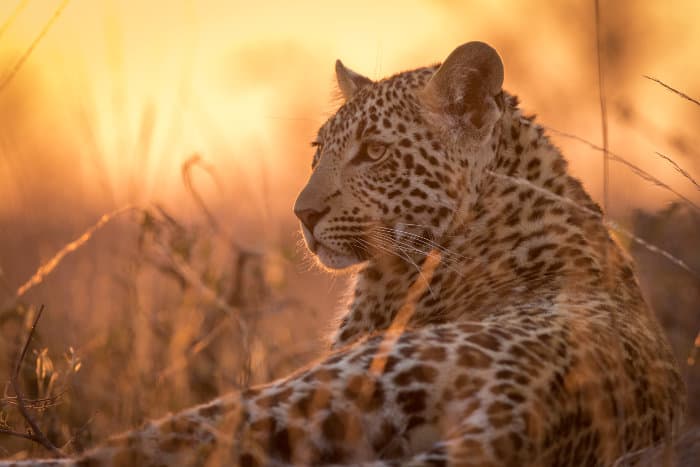 In comparison, jaguar have fat rounded faces. Their heads are much larger and their ears aren’t as prominent. 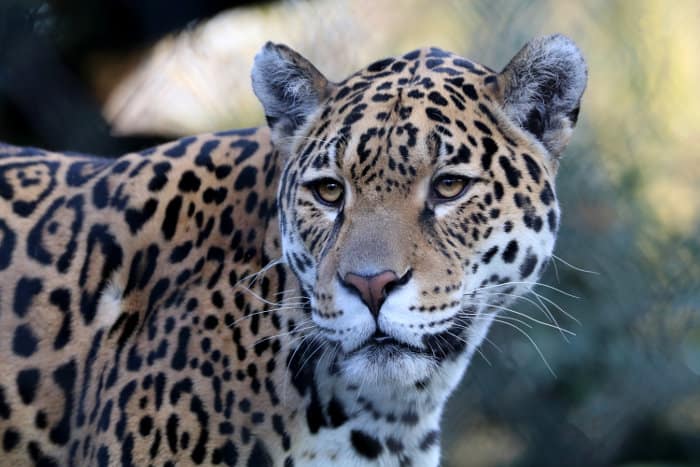 7. What’s the difference between a leopard and a jaguar’s natural habitat?

Both these cats are adaptive hunters that can survive in many different habitats. They are most commonly associated with trees.

A popular perception is that jaguars live in the rainforest, and leopards live in trees on the African savannah.

This may reflect the 21st century, but back in history, these cats had far larger ranges. Jaguars used to roam California, the Grand Canyon, and Texas. Unfortunately, people hunted them to extinction in North America.

Leopards used to live in Hong Kong and Japan. They’ve found leopard fossils all over Europe. In Russia, leopards inhabit snowy forests and brave temperatures of 25 below.

Africa’s leopards are most abundant in areas of savannah, where there is a mix of grasslands and trees.

Jaguars now find sanctuary in the deeper rainforest as they have lost their habitat elsewhere.

8. Jaguar and leopard are solitary animals 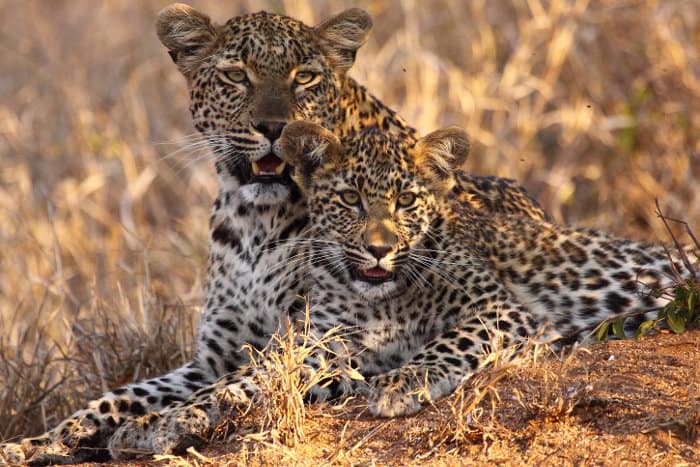 Both species display similar behavior. They are expert predators who live a solitary existence and fiercely defend their territory.

If you see more than one, then it is either a mother with cub, a mating pair, or you are in a zoo.

Wondering “which is faster, a jaguar or leopard”, or “which animal is stronger?” Simply put, leopards are faster, while jaguars are stronger.

African leopards can reach a top speed of 56-60 km/h (35-37 mph). Using stealth, they creep up on their prey before accelerating to top speed in just a few strides.

If you want to learn more about their speed, have a look at this article on how fast a leopard runs.

Jaguars are only a little slower and can comfortably reach 50 km/h, even though a dense rainforest doesn’t provide space for them to do this.

Both these species have some of the strongest jaws in the animal kingdom. Jaguars are a little stronger and have a bite so powerful it can pierce the shells of tortoises and other armored prey.

These spotted hunters typically kill their prey through suffocation, delivered by a strong bite to the throat or neck. Jaguars are unique in that their teeth are strong enough to pierce the skull of their prey.

Jaguars are bolder when facing off with large species, while leopards tend to move away from dangerous animals.

Generally, jaguars do not back down; they are fearless and feared.

11. Black panther vs jaguar vs leopard 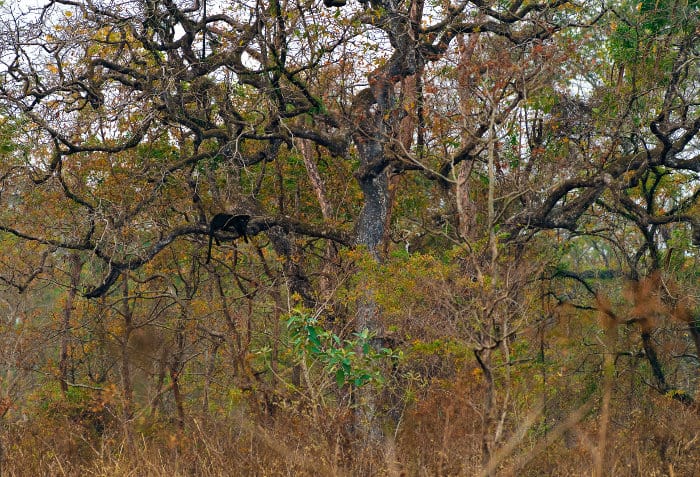 Black panthers can be leopards or jaguars! How confusing is that?

The black fur is caused by something known as melanism, a natural pigmentation that causes the fur to turn black.

It is similar to what causes some lions to have white fur but is different from albinism (albinos) as this is an absence of color.

Look closely at any black panther, and the rosette patterns are still visible; they’re just obscured by the new black pigmentation. So to compare jaguar vs leopard, you have to look at body shape and tail instead. 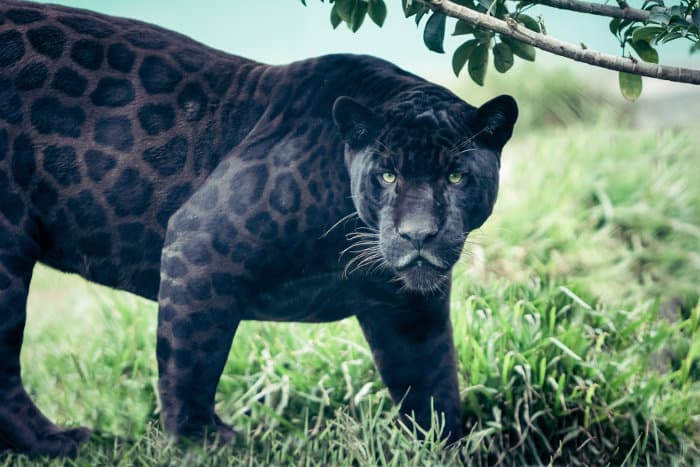 Some researchers have argued that the black color is a sign of natural selection. Black fur provides better camouflage when hunting in very low light, so it is advantageous. However, this is yet to be proven.

Rosette patterned leopards and jaguars can’t give birth to a black panther. If one of the parents has black melanism, the offspring might get it.

Leopards and jaguars have different techniques when it comes to hunting prey.

Jaguars stalk and ambush their prey. Then, they use their large jaw muscles and sharp teeth to pierce their prey’s skull or spinal cord.

On the other hand, leopards take out their prey with a powerful bite to the throat.

You might see these agile cats ascending a tree to catch birds or drag carcasses up.

They’re not just taking their prey up to enjoy their meal with a view, but to protect it from thieving lions and hyenas.

13. Leopard vs jaguar: climbing and swimming 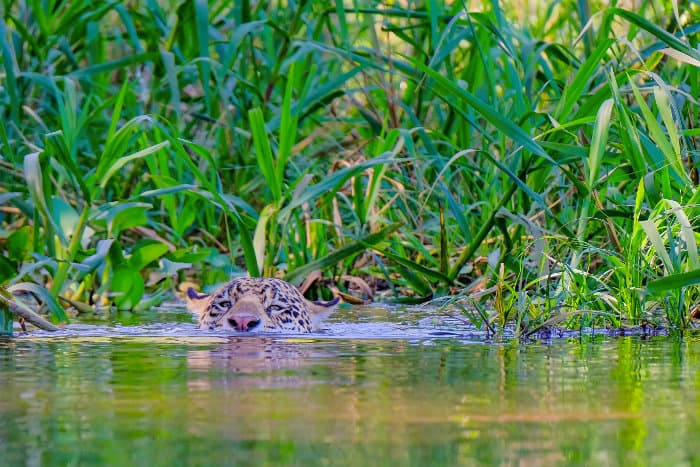 Are you wondering who the better swimmer between jaguars and leopards is?

Leopards can swim when they need to, such as to reach an island or cross a river.

Jaguars are superb swimmers and go diving for food, like caimans and large fish.

A slender figure and longer tail make the leopard more agile. It is a better climber and more adept when running at speed through the trees.

14. What is the difference between a jaguar and a leopard diet?

Jaguars are apex predators. As you might expect, these carnivores mainly feed on the meat of other animals. Some of the jaguar’s common prey include snakes, turtles, caimans, fish, birds, armadillos, and deer.

What do leopards eat? They are carnivores that prey on medium to small-sized animals. With their healthy appetite, leopards also attempt to hunt larger prey.

Ultimately, their diet depends on their surroundings. For instance, a leopard living in the African savannah or grasslands is likely to feed on antelope, gazelles, warthogs, and primates.

On the other hand, leopards in mountainous regions prey on rock hyraxes, porcupines, and rodents, while those on islands have a fish-focused diet.

15. Both jaguar and leopard animal species are endangered 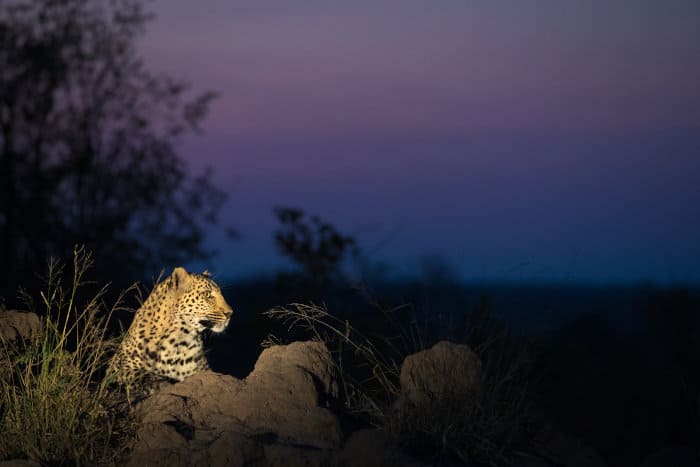 The current outlook doesn’t look good for either of these magnificent species.

Leopards are vulnerable on the IUCN red list, while jaguars are near threatened. Their populations have dropped significantly over the last century.

The more people that learn about leopard vs jaguar differences, the more who are aware of the challenges facing these animals in the wild. Namely habitat loss, habitat fragmentation, hunting, and poaching.

Let’s hope that the 21st century brings a change and that these incredible cats see their range and population increase.

Spot a Jaguar or Leopard in Their Natural Habitat

Hopefully, this article has helped you better understand jaguar versus leopard differences and similarities. Both have an array of captivating features, from their unique spots to their powerful bites.

While learning about these amazing animals is great, spotting one in the wild is an unforgettable experience. If you visit a national park, you’ll also get the chance to support those protecting these vulnerable animals.

So why not venture out in the lush rainforest to see the majestic jaguar, or book an African safari to marvel at a leopard climbing up a tree?

A spectacular journey awaits you.