Most people don’t even think about it.

Anyone going on safari dreams of lions; of elephants charging through the forest; of a big cat hunt playing out besides a hippo-filled waterhole.

But unless you’re already an avid birder, there’s a good chance that our winged friends aren’t very high on your agenda.

Despite their beauty and extravagance, most people don’t find birds as exciting as the big stuff – most are more interested in cheetah vs leopard vs wild dog.

However, witnessing birds on safari is always an unexpected highlight. This article shows you the top ten: classic species, what they sound like and where you can encounter them.

If you’re already excited about birds on safari then this article is an introduction to what you can find. And if you’re thinking “birds on safari!” then this should change your opinion a little. 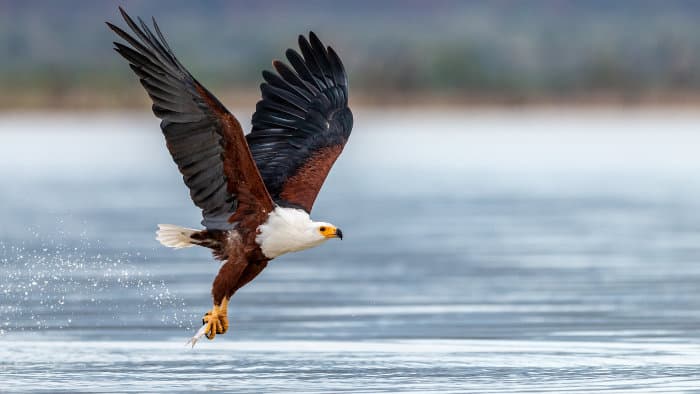 Undoubtedly Africa’s most striking symbol, and Zambia‘s national emblem, this is the ultimate bird to see on safari.

The fish eagle is unmistakable with its white head and breast, chestnut belly and forewings, black under-wings and white tail.

Male and female appear similar but the female is generally larger. 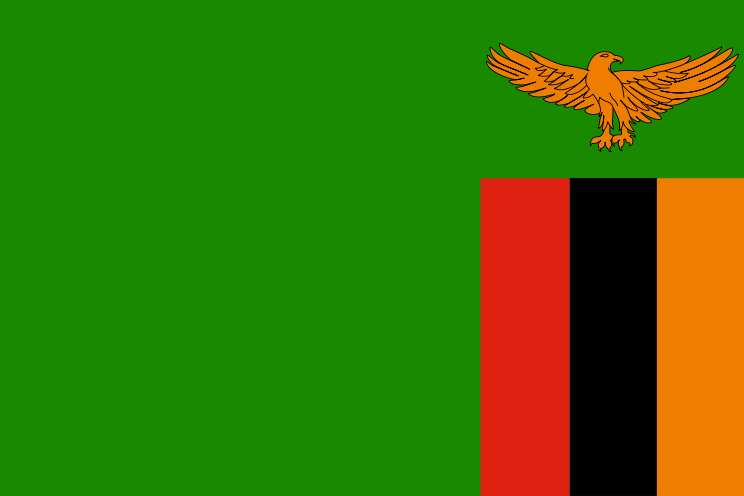 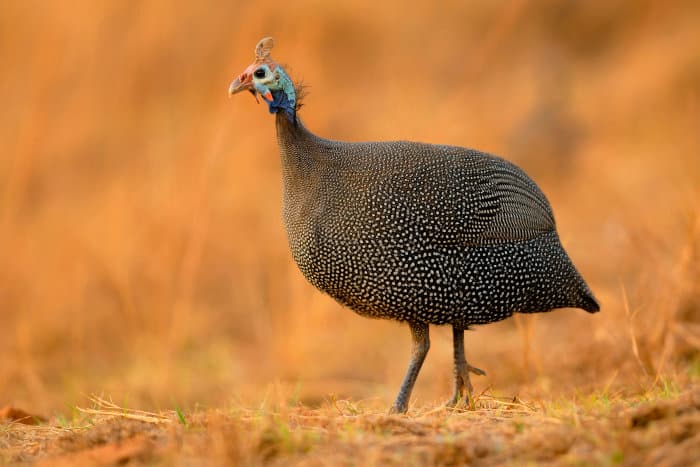 Not the most intelligent of creatures, but it is pretty and intriguing nonetheless. Both helmeted guineafowl sexes have a casque on the head, though the male’s “helmet” is longer.

Call: ‘krrdii-krrdii-krrdii-krrdii’. Impressive, huh? Who would’ve thought in the first place that I, Africa Freak, could speak guineafowl language? 🙂 Disclosure – I’ve spent many mornings watching them roam outside my safari camp.

Habitat: All types of open and wooded grasslands + coastal forests.

Range: Most of Sub-Saharan Africa, except in rainforests and the Somali region. 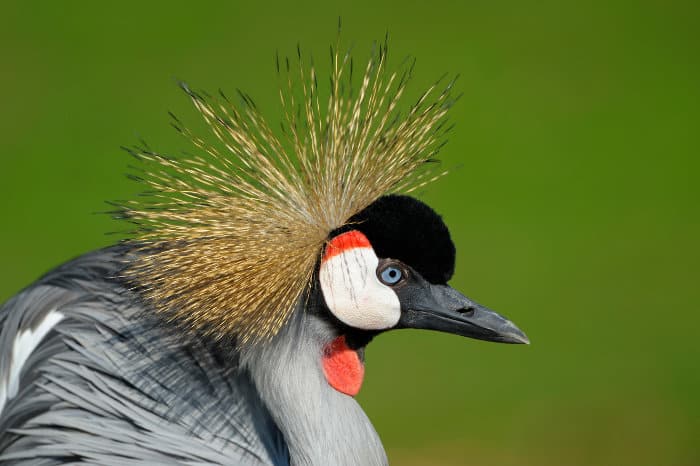 Highly characteristic with its stunning bristly crown, the grey crowned crane is one of my favorite birds to see on safari.

Call: Trumpeting ‘may hem’ flight call (not to be confused with the Norwegian black metal band).

Range: Most of Eastern and Southern Africa. 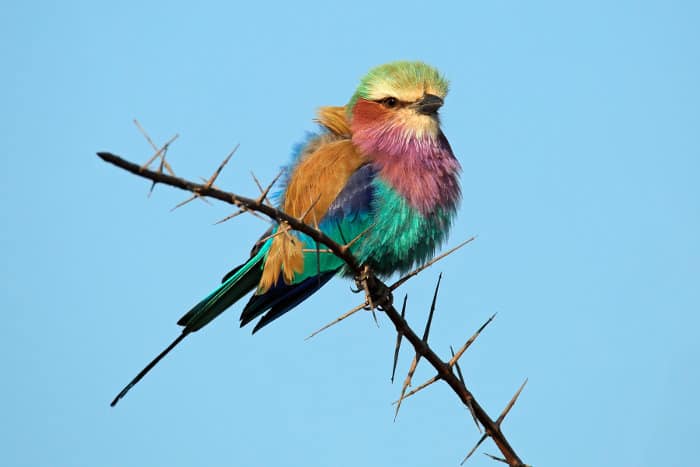 A stunningly exquisite bird that you are most likely to encounter during a game drive. “Rolls” are on display and explode into a myriad of colours when giving chase.

If you’re patient enough when having a picnic, say on the Serengeti, this bird may perch on your safari vehicle.

Habitat: Grasslands and wooded acacia savannas. The lilac-breasted roller perches conspicuously, and is habitually found on termite mounds or telephone wires from where it scans the ground for large insects.

Range: The bird’s range coincides with the great wildlife corridors of Eastern and Southern Africa. 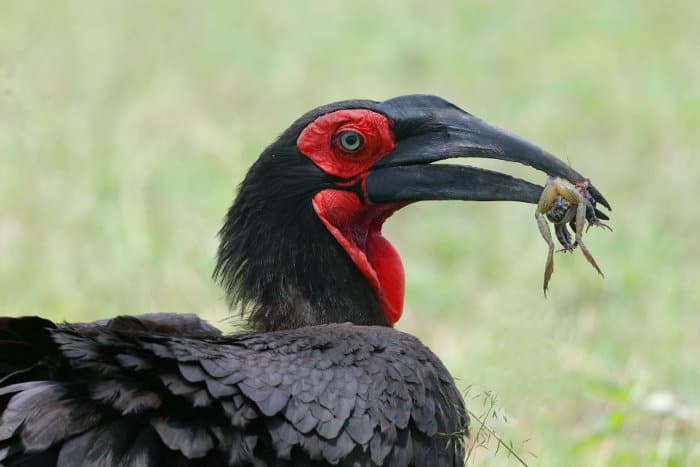 The female is distinguished from the male thanks to its blue throat patch. Not necessarily a looker but you know you are on safari when a southern ground hornbill puts in an appearance.

Call: A loud, booming duet ‘ooomph-ooomph’, given on early mornings. 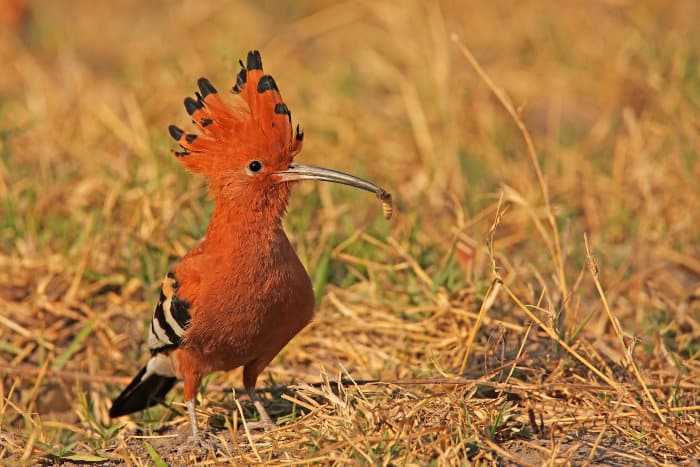 One of the only African bird species with a “punk-like” crest, and a long decurved bill. Flies impressively, like a giant butterfly with pied wings. The African hoopoe is one of top birds to see on safari for bird lovers.

Habitat: Wooded savannas, open parklands and suburbs. We used to have a few of them in our garden in Johannesburg. Very funny little birds that walk at a very fast pace, probing the soil with their extended bill. 🙂 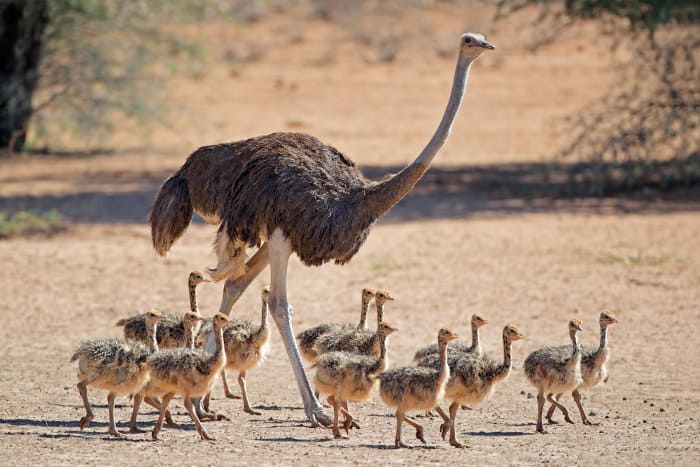 The world’s largest and heaviest bird, and the only one with just two toes. Common ostriches are flightless. Males are black with white wings while females are dull brown, with “dirty” white wings.

Sorry ladies, but in the animal kingdom males are usually more attractive than females. Ostriches are also one of the world’s fastest animals.

Call: Usually heard at night or when displaying; a loud booming call, ‘boo-boo-booo-hooo’ (sounds like a cry when you write it down).

Believe it or not, but the noise itself is very similar to the roar of a lion. Scaaary! 🙂 Ostriches can also whistle.

Range: Southern edge of the Sahara and Sahel, and through much of East Africa. Southern race also widespread, especially in farming areas where they are raised for their eggs, feathers, meat and skin.

Oudtshoorn in South Africa is the ostrich capital, home to over half the world’s cultivated ostrich products. 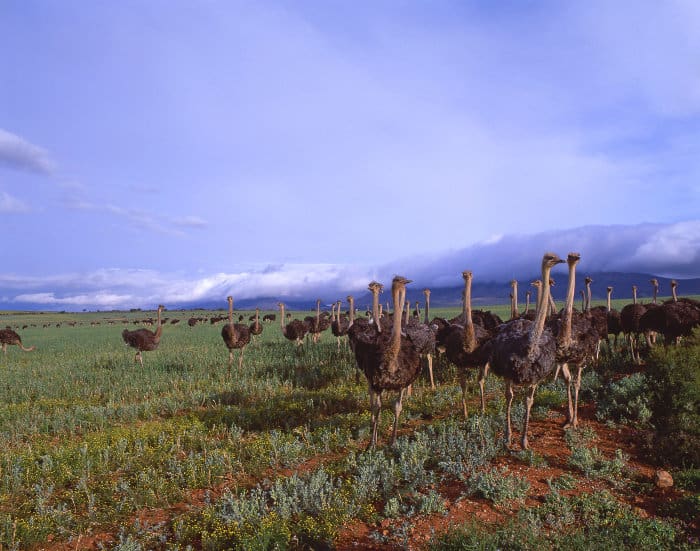 A single ostrich egg can provide an omelet for at least 10 people (or 12 moderate eaters). 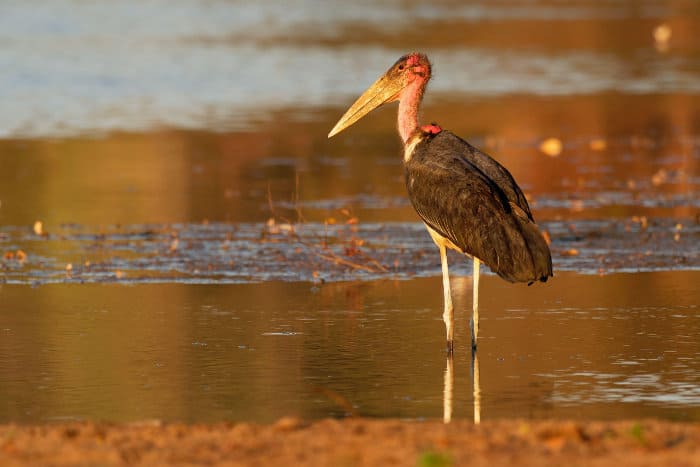 An enormous, “ugly” bird. A true scavenger that cleans out carcasses in search for bits and peaces of meat. Is frequently associated with vultures but quite different in behavior.

They can be scary.

One Africa Freak contributor used to come home to marabou stork picking the scraps off his verandah in Lake Naivasha, Kenya.

Call: Primarily silent, but can clap its beak during display.

Habitat: Mainly savannas and plains in the wild. Also becoming present in towns: around dumps, fish markets or abattoirs. 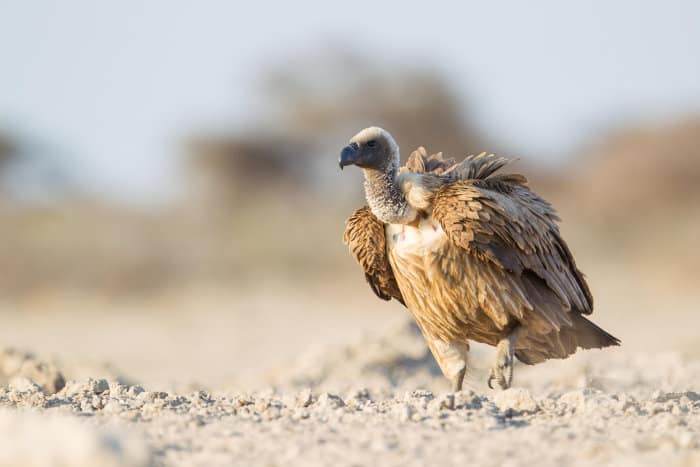 Africa’s most widespread large vulture, and known as the “garbage man” of the African savannah. 🙂

Often confused with the Cape vulture, the white-backed vulture is smaller in size and has a dark eye (Cape vultures have honey-coloured eyes).

Habitat: Open plains and wooded country where game is abundant. 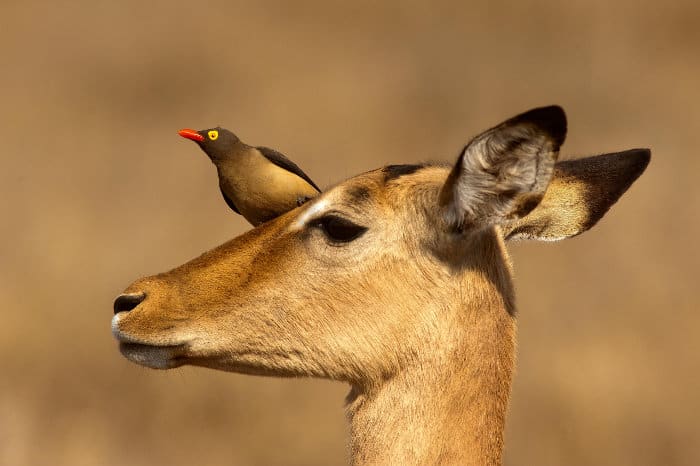 The appointed beautician of the African bushveld. 🙂

Medium-size bird very similar to the yellow-billed oxpecker, but with an all-red bill.

Commonly mixed with large mammals (buffalo, rhino, hippo), as it removes unwanted parasites such as ticks and flies from the host’s body.

In fact, the red-billed oxpecker will clean the animal’s body thoroughly, even parts such as ears and nostrils. It’s quite a spectacle to watch!

Habitat: Savanna, in close proximity to cattle and game.

More of the Best Birds on Safari

These ten safari birds are relatively common and widespread. They are just an introduction though. To see many more you must visit Africa and connect with your wild side.

Remember, every safari can be customized to your interests. So if you like birds like these, then tell your safari operator and they can go searching for rare species.