16 interesting facts about the black rhino: the endangered fighter 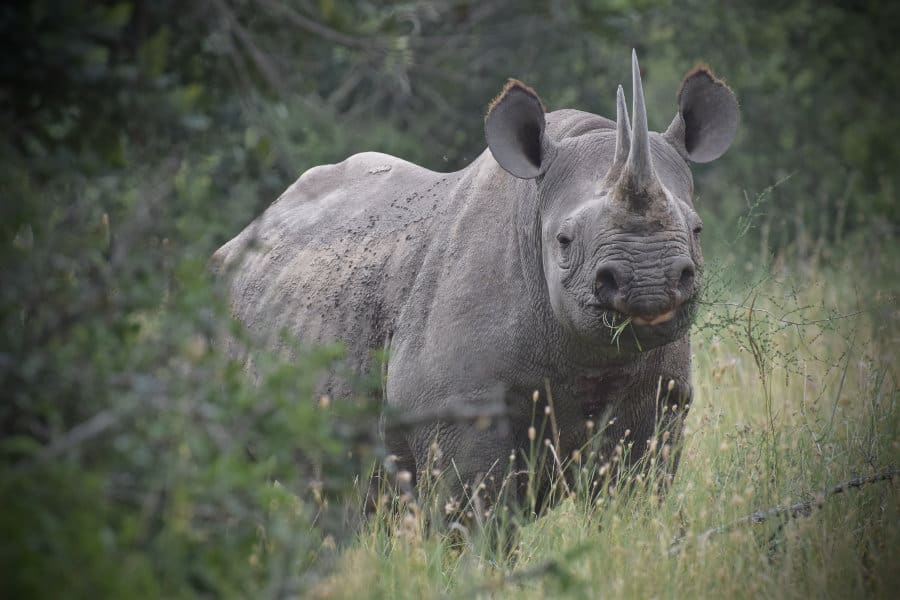 The rhinoceros is one of Africa’s most majestic and popular animals. Unfortunately, its survival is seriously threatened.

Today, the protected black rhino roams the reserves and grasslands of Africa, along with its fellow white rhino. In terms of size, rhinos are the second-largest land mammal after the elephant. And there’s a lot more to them than meets the eye.

1. Black Rhinoceroses are an Endangered Species 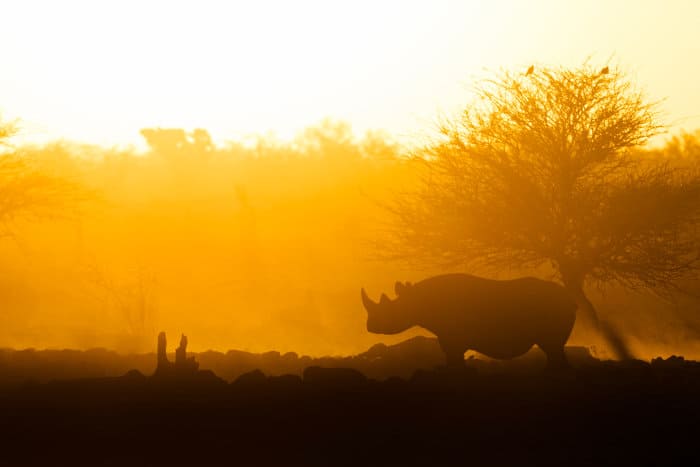 Sadly, this beautiful animal classifies as endangered on conservation lists. The main reason for this is poaching.

Rhino horn is valuable in some parts of the world, and poachers are constantly looking for opportunities to acquire them. Black rhinos have two horns, making them especially sought after for this illegal wildlife trade.

Other factors play a role – in some countries, habitat loss and political instability hamper conservation efforts. The good news is that poaching has slowly been decreasing over the past few years, and the population numbers have slowly started to rise.

This is actually true of all rhinos. Although, that doesn’t mean you can sneak up on them. They smell and hear exceptionally well. Besides, surprising a rhino isn’t a very good idea. They tend to charge anything that startles them, and there’s very little that can stop a charging rhino.

3. Rhinos Can Run Faster Than You 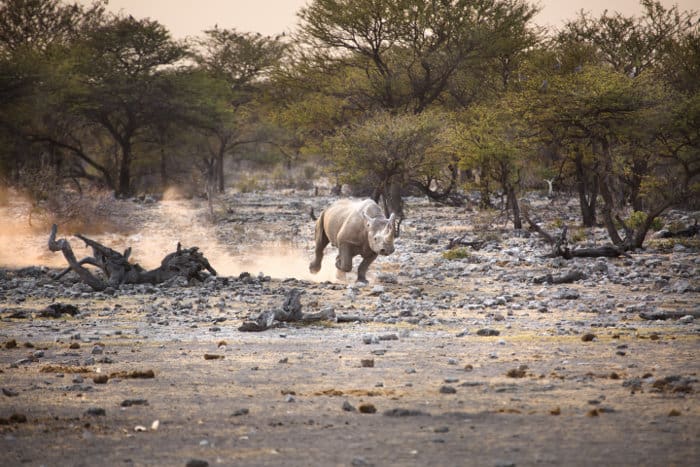 How fast can a rhino run? Our lumbering giant might well surprise you. Despite looking bulky and awkward, a rhino can really hit the accelerator.

For context: A very fast human hits a top speed of around 45 km/h. Rhinos run a speedy 55 km/h. Watching a one-tonne rhino move is awesome! And it’s a scary as well as awe-inspiring sight.

4. An Adult Black Rhino is Heavy

A black rhino grows to an impressive 1.5 m tall and 1300 kg in weight on average. And they aren’t even the largest of the five rhino species. Some of the largest rhinos recorded stand taller than 1.8 m and heavier than 1500 kg. Generally, white rhino are larger than black rhino.

5. The Black Rhino is One of Five Types 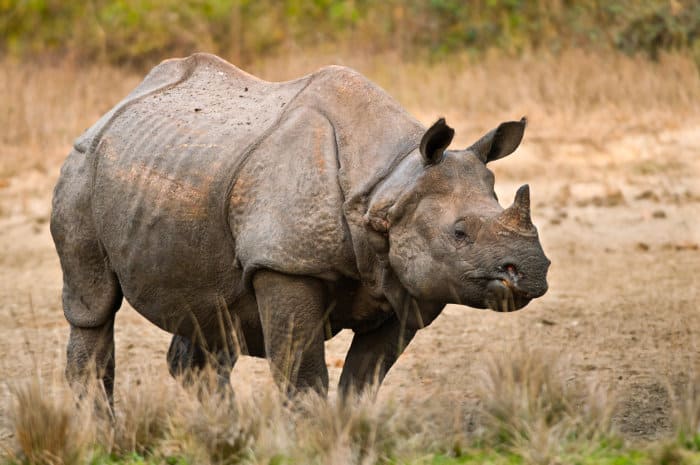 The black rhino ranks as the third largest of the recognised rhino species. Here they are in order of size:

6. The Difference Between Black and White Rhinos

Their names have nothing to do with their colour. Black rhinos and white rhinos are actually basically the same colour – a grey or brownish-grey. Why they acquired the black and white classification may seem a little odd or vague. The easiest way to tell them apart is the shape of the lip.

The black rhino has a hooked upper lip that it uses to hook leaves from bushes and trees. They are browsers as opposed to grazers. And their two horns are somewhat similar in size.

The white rhino’s top lip is flatter. It tends to graze on ground-based vegetation, and will likely have only one much larger horn.

7. They Love to Eat Plants and Vegetables 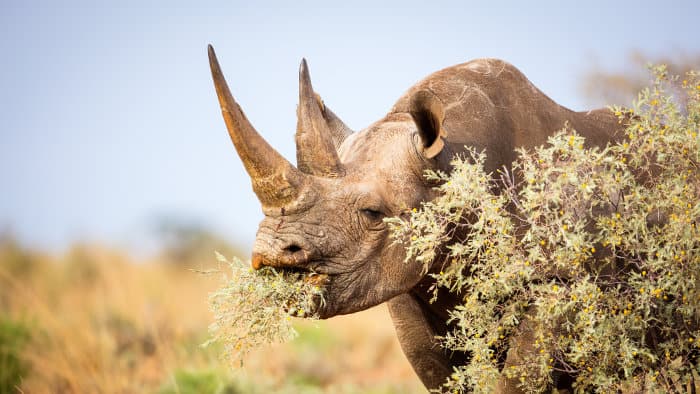 Rhinoceros, black or white, are vegetarians. Black rhinos feed on leaves and fruit that they find and pick off trees and bushes. They use that flexible top lip to grab and pull the food off the branches and make sure to pick only the best food, too.

We know that they love at least 220 different types of plants and fruits. They also love to be near water and hang around waterholes and slow rivers. If it doesn’t rain for a while, rhinos can go for a few days without water. So they’re tough!

8. Most Natural Deaths Occur From Fighting

The rhino’s unfortunate fate ties directly to hunting by humans. In the wild, however, most male rhino deaths actually occur due to combat. Rhinos are territorial, and when males challenge each other, things can get very aggressive and violent. No surprise, with all that bulk and those horns.

9. Even Reproduction Can Be Violent 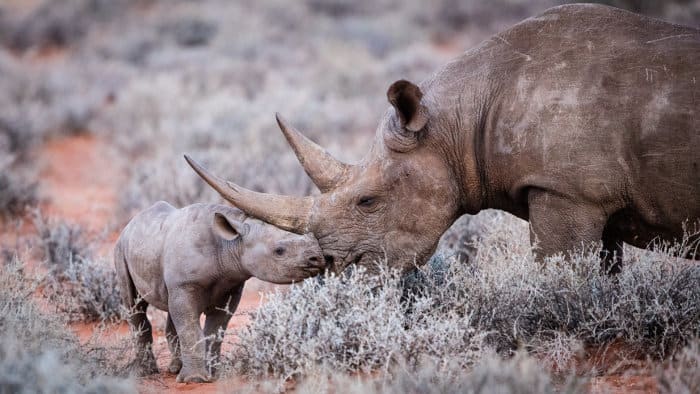 There is no mating season for rhinos. So it can occur at any time of the year. Females reach maturity earlier than males, at around 5 years old. Males start to mate and protect their territories from 10 years onwards.

Although, when they breed, it isn’t all smooth sailing. Females don’t always accept the male’s advances and fights often erupt. If, after all that, mating is successful, one calf will be born after 15 months of pregnancy. A baby rhino weans after a year and might stay with the mother for up to four years.

Rhinos are cool. Literally. At least, they like to stay cool. In the morning and the evening, you find them moving about, eating. In the hottest part of the day, they find a shady spot to sleep, or a watery pool to wade in. They also love wading around in water or mud.

Mud is good for lots of things. Believe it or not, even rhinos can get sunburned, and mud is a great sunblock. It also acts as an insect repellent. 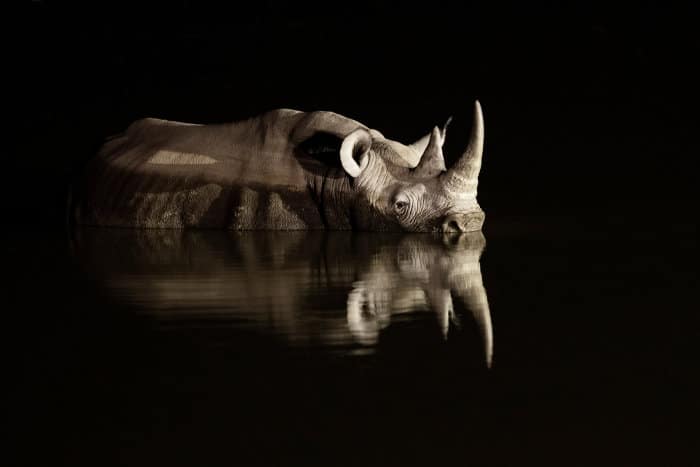 Rhinos are loners. They like to be on their own, minding their own business. This is especially true for black rhino. You’re more likely to see white rhino in a crash (that’s the collective name for rhinos), than black rhinos. These crashes are usually made up of moms and calves.

It’s truly bizarre that ‘rhino horn’ is such a valuable commodity for poachers and hunters. It’s not even really horn at all.

Animal horns grow as bone from the skull. A rhino ‘horn’ is actually keratin or fibrous protein and grows from the skin layer.

It’s like a really long fingernail, or really long compressed and hardened hair, which is the same stuff. Just like nails and hair, if a horn falls off naturally, it will likely grow back eventually.

Black rhino horns are the longest ‘horns’ of the African rhino species. They grow up to 1.2m long. That’s impressive. They use it to scratch and dig for food, making it another fascinating tool, just like those amazing flexible top lips.

13. Black Rhinos Live Up to 40 Years on Average 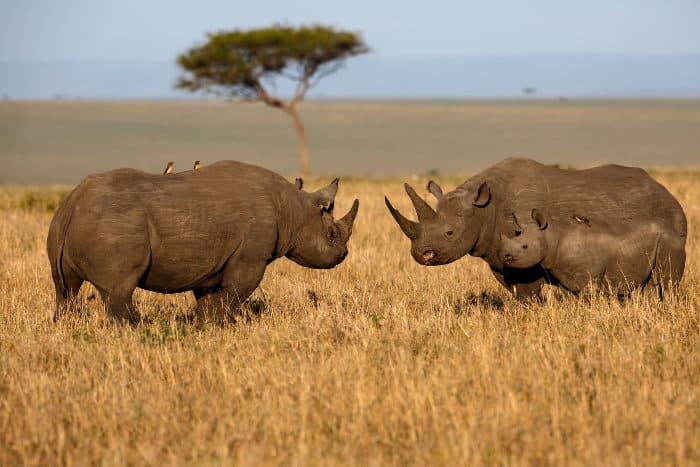 In captivity, rhinos seem to live a few years longer on average. Black rhinos live to an average of 40 years naturally. This is particularly interesting when you look at the reproductive life of rhino.

Since females mature at 5 years and males at 10 years, it means that a female is able to reproduce for a much larger percentage of her life. Healthy females can give birth to a new calf every 3 years, more or less.

14. They Have No Natural Predators

Rhinos are the second-largest land mammal after elephants. And like elephants, they have no natural predators, other than humans.

Occasionally, desperately hungry lions, other big cats or hunting dogs attack small young rhinos. They aren’t often successful, as young rhinos are always accompanied by adults. And no one wants to tangle with a fully-grown rhino.

Rhinos also have a frightening defence mechanism. They charge at whatever frightens them. That’s usually enough to scare off any unwanted attention. 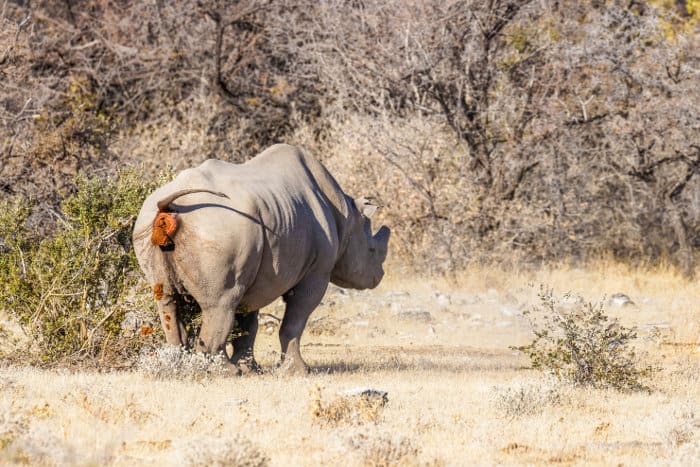 Rhinos can tell a lot from other rhino dung. Think of it as a unique fingerprint in humans – each rhino’s dung can trace back to a specific owner.

Rhinos identify territory this way. Fascinatingly, you can also tell a rhino’s age or sex. No doubt in the combative world of rhinos, this avoids even more fighting, as a newcomer simply avoids any trouble.

At last count, the World Wildlife Fund estimates that there are just 5500 black rhinos left. They form part of the world rhino population of just 27 000. The black rhino population slightly increased from just 20 years ago, yet the number remains fragile, so work continues urgently on that front.

For perspective, the WWF estimates that there may have been almost half a million rhinos living at the start of the 1900s. The numbers dwindled through excessive hunting and uncontrolled culling. It continues today with mass poaching and illegal trade in horn. 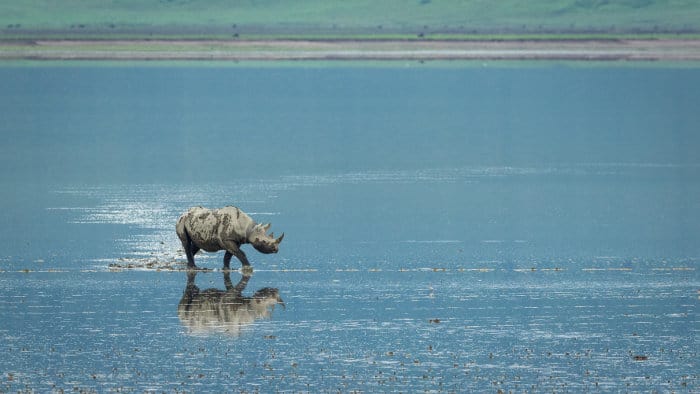 You can’t help but wonder: Why is the black rhino endangered? They are beautiful, fascinating creatures. And it is a true tragedy that they are on the endangered species list. Though conservation efforts are urgent and ongoing, it’s difficult to predict the future of the rhino.

One thing you can do is support efforts to preserve this precious animal by booking an African safari before our beloved black rhino is extinct. There’s no substitute for the incredible experience of seeing them in their natural habitat. 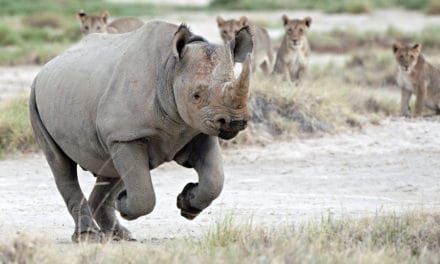 How fast is a rhino?

“Robbed” by an elephant (iPhone story)

Why is the African wild dog endangered? 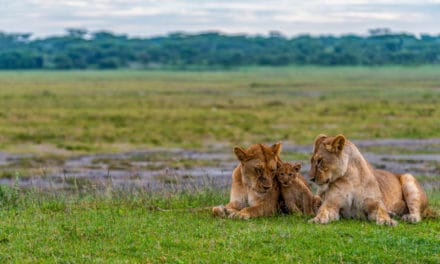