Galloping across the highveld comes a blesbok, its striking white face glistening beneath the sun.

Spiralled horns rise skywards and a flashing white tail swishes through the grass. There are few finer wildlife sights, such a unique antelope blazing a trail across the savannah.

Here’s a short introduction to the blesbok, so you know how to distinguish one during a safari in South Africa.

Blesbok – Rarer Than the Statistics Show 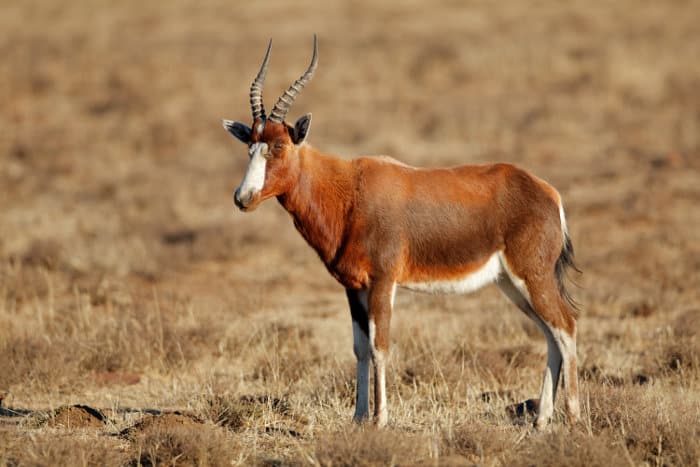 Blesbok are endemic to South Africa and their numbers have reached 250,000. However, only 3% of these live in national parks. The rest are bred on commercial farms and are not truly wild.

That makes blesbok a challenging safari sight, even if these animals prefer open plains.

It’s easy to distinguish them with a single glance. The vivid white forehead is more like a horse than an antelope and the v-shaped horns are beautiful to behold.

When Dutch settlers came to South Africa they named these antelope bles, a word that translates as the “blaze” seen on a horse’s forehead.

Humans Are Their Main Predators 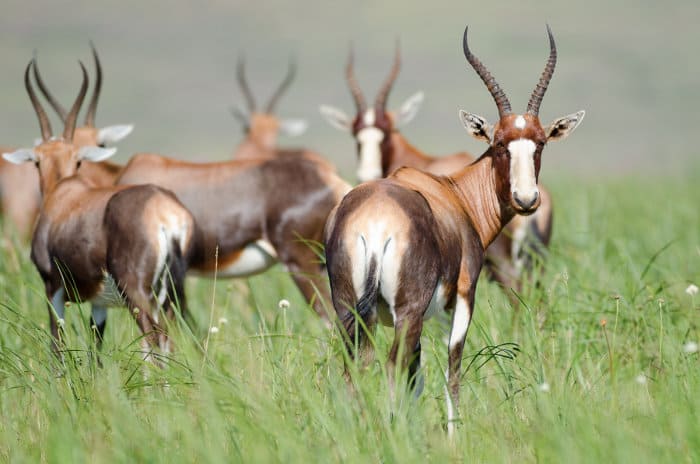 Unfortunately, blesbok have been a victim of their own beauty. They are the most commonly hunted antelope in Southern Africa, killed for sport by both local and international hunters.

They were hunted so rampantly during the 18th and 19th centuries that they almost became extinct. Now, even though they are protected, it is still legal to gun them down. Blesbok are a trophy, a meat to put on the fire, and an alluring skin to own.

These medium-sized antelope have always had predators. They are hunted by all the big savannah predators, such as hyena, cheetah and lion. Eagles and jackals can snatch young calves.

However, these antelope are experts at avoiding their natural predators. They can run at 70 km/h and maintain that speed for more than a kilometre. Such pace and endurance is remarkable, making them a very tricky meal, especially for lions.

Of course, that defence isn’t much good against a hunting rifle. Search for blesbok videos and all you get is cowards shooting beautiful animals from long range.

Where to See Blesbok on Safari 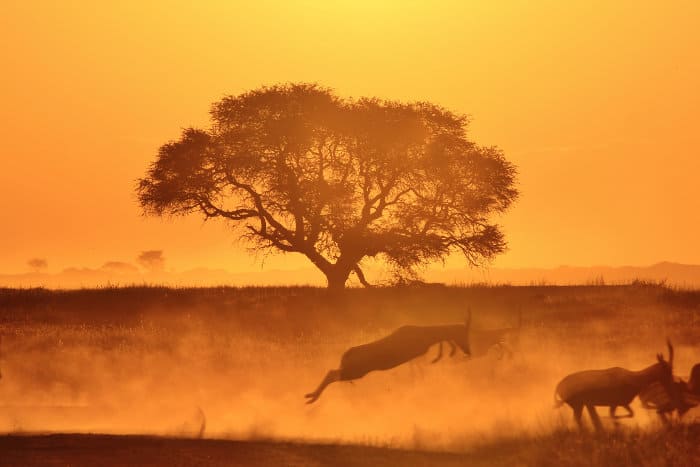 These animals are widespread across South Africa but their distinct populations are relatively small.

Greater Kruger National Park is one place to see them in the wild, especially in open swathes of grasslands towards the less visited north of the park.

Blesbok do not like woodland and are most commonly encountered in open grasslands, in parks such as Addo Elephant National Park and others in the Eastern Cape and Free State.

Blesbok are very similar to bontebok and the two species can interbreed, creating the delightfully named bontebles. However, sightings of blesbok in Bontebok National Park are uncommon.

They’ve been introduced to Namibia on commercial farms, so soon it may be possible to view them in Namibia’s national parks as well.